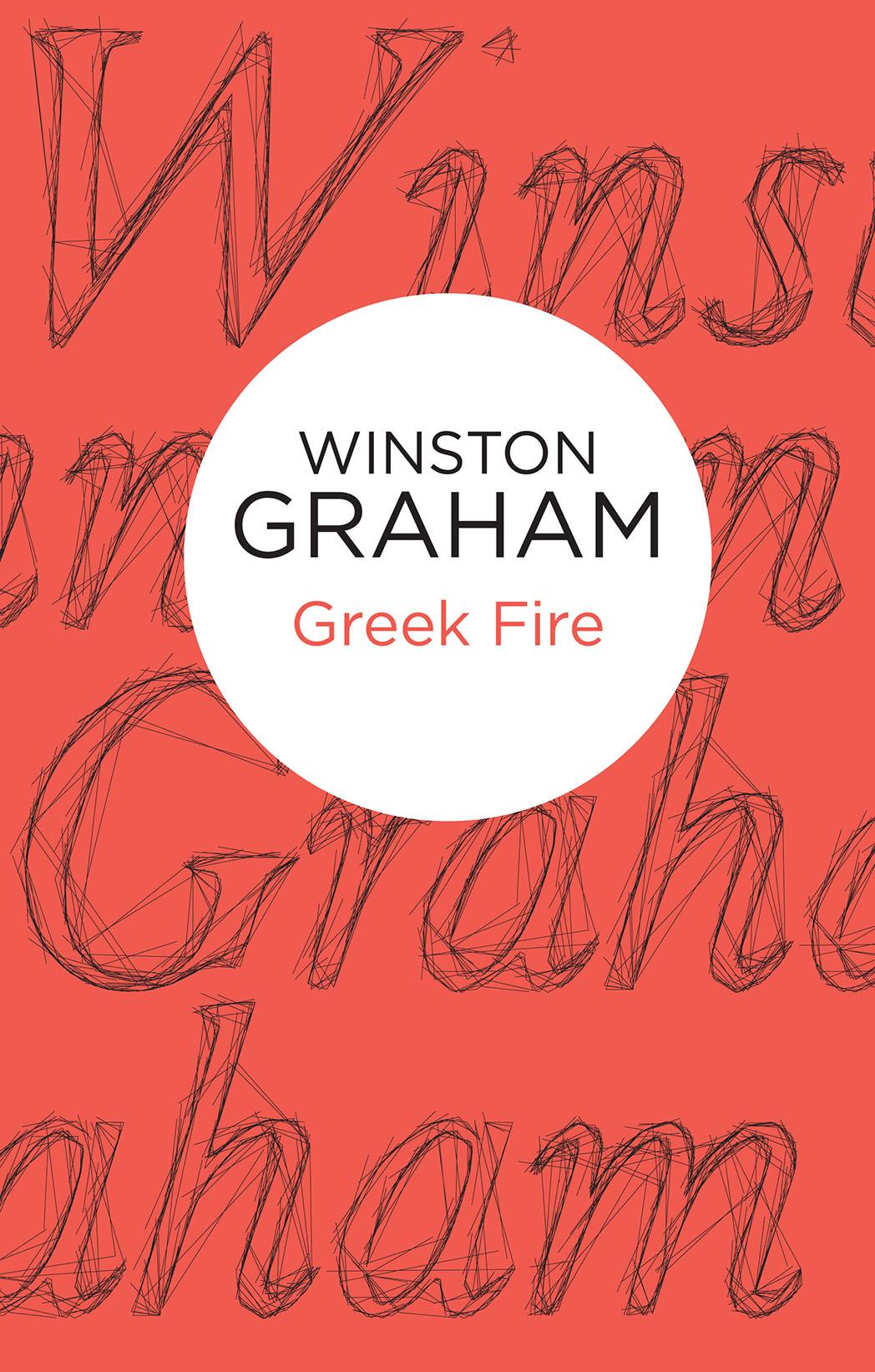 The Little Jockey was not much more than a converted cellar. Vanbrugh found it at the second attempt, down an alley just out of reach of the seedy lights of Ommonia Square. But here twenty yards was enough to pace out a thousand yearsâfrom hissing trolley-buses and neon lights and chattering crowds, past two doorways, a Greek and a Turkish, past a garbage can with its lid aslant like a mandarin's hat, across a gutter half choked by the mud of yesterday's rain, to an arched entrance and twelve stone steps cut before Charlemagne, rubbed smooth and treacherous and leading down into the dark. At the bottom an attendant dressed like an Evzone took his coat and pulled aside a curtain to see him down a second flight to the main room.

The place was about two-thirds full, but they found him a table in a good position in a sort of upper cellar which formed a terrace on a higher level. Eight or ten tables up here led to six break-ankle steps and a larger domed cellar where there were more tables and room for dancing. The walls were of rough stone and inclined to sweat; curtained arches led to service quarters; and lights from candles in old glass lamp-holders lit up the statuary which stood defensively in recesses: two tired Byzantine madonnas, a stray apostle lacking an ear, St. Francis with a lamb.

The newcomer waved away a couple of the house girls who drifted across to help him with the bottle in the bucket, but when a tall Lithuanian Jewess stopped by and said, “Amerikani?” and slipped into the seat opposite, he raised no objection, and a waiter hovering near quickly put another glass on the table.

Vanbrugh was the sort of man you wouldn't notice in the street: he could have been twenty-five or forty, and his tight rather craggy face, his deep-set, pale-eyed inner containment made no substantial first impression. He didn't talk to the girl, but she re-filled his glass once or twice, and her own with it, and when she stretched forward a hand for his package of cigarettes he absent-mindedly shook one out for her and lit a match with his thumb-nail.

At a table in a corner was a middle-aged stout man in a black alpaca suit, with a fluff of untidy beard worn like a bonnet string under his chin. Vanbrugh frowned as at an uneasy memory. The fat man was eating; he was the only person so occupied; he paused now and then to brush crumbs from his shiny shabby suit, and with a sort of sham gentility he raised the back of his hand to hide a belch; once a piece of shell fish slid out of his mouth and hung like mucus from his beard; his companion, a tall youth with a narrow nose and a girlish mouth, watched him with bright malicious eyes.

The orchestra of four were perched in an odd wire balcony to the left of the steps like canaries in a cage. They were playing a western dance rhythm, and half a dozen couples moved like sleepwalkers about the dance floor. Beside the band was a fair copy in bronze of the third century
B
.
C
.
L
ITTLE
J
OCKEY WHICH GAVE THE CLUB ITS NAME
.

“Who is that man, d'you know?” Vanbrugh said to the girl opposite him. “ The fat man eating at the table in the corner.”

“Who? That one? No. I have never seen him before.”

“You know Greece, honey?” she said.

“I am quite new here. You must tell me.”

“Where are you from?”

The band had stopped and the dancers were dispersing. Two couples climbed the steps and took seats at a table nearbyâwealthy young Greeks, both men handsome but running to fat, one girl ordinary, the other a beauty.

Vanbrugh eyed her through his smoke-screen. Her raven black hair was caught together with a diamond clasp at the back; ivory profile with a slender, almost too slender, nose, eyes lit with exceptional brilliance; the classic conception of beautyâby Byron out of Polyclitusâbut all on a twentieth century basis, from the peach finger-nails holding the long amber cigarette-holder to the brilliant worldly-wise smile.

With that sixth sense that women have, she soon knew she was being looked at, and her gaze moved to Vanbrugh's table, took in the thin undernourished-looking American, the cheap girl, the waiter changing the bottle in the bucket. A glimmer of amused civilised contempt showed in her eyes before she turned away.

“How long have you been here?” Vanbrugh said to his companion.

“What's this new cabaret you have?”

“The three Tolosas? They are Spaniards. They dance like all Spaniards.”

“This their first week?”

“Last week was their first week. They come from Paris. They have been good for business. Before that we had singers from Macedonia. It was very awful.”

“When does the cabaret come on?”

“Almost any time now. Like to dance, honey, before it begins?”

“You are not very bright, are you?”

“Maybe there's someone else who'd dance with you.”

“Does that mean you want to get rid of me?”

The fat Greek had stopped eating to draw breath, and he took his handkerchief from the corner of his collar and wiped it across his mouth. His heavy glance seemed to linger on Vanbrugh's table. Vanbrugh said: “No, stay if you'd like to.”

One by one the candles were blown out, and shadows fell on the company like a secret retinue of waiters. Towering wine barrels and weather-born statuettes were sucked up into the darkness, and light played on the circular dance floor.

“I tell you, honey, I know no one. We do not see the same faces often. Ah, but that one â¦ Stonaris, isn't that her name? Anya Stonaris. I have seen her photo in the weekly papers.”

Her voice was drowned by the clash of cymbals. Four girls in traditional Spanish costume came out and performed a Flamenco, to the clicking of castanets and the vehement stamping of their feet, while in the back-ground a thin lithe man dressed like a matador crouched before a harp and touched it in a casual way from time to time with his hands. The first thing Gene Vanbrugh noticed about him was that he was in a sweat of fear.

When the girls went off, dragging perfunctory applause after them, the thin Spaniard stayed where he was, his short nervous fingers barely touching the strings. Once he raised his bloodshot eyes to sweep them in a quick semi-circle, meeting the darkness and the waiting faces.

His companion shrugged. “Who knows? That one with herâthat manâis called Manos. He is a politician. He has been here often before, but then he has come alone.â¦”

A woman stepped through the curtains on to the dance floor. She was young, about twenty-two, and fat, twelve stone or more, and short, not over five feet. The broad nose and thick flattened lips weren't negroid, not even Moorish. She was pure Spanish. Hands on hips, in perfect ease and confidence, she sang a comic song in a harsh broken powerful voice.

Tango by Justin Vivian Bond
A Touch of Frost by S. E. Smith
The Risen by Ron Rash
Protecting Lyndley by Amanda Bennett
Death in a Beach Chair by Valerie Wolzien
The Brothers Boswell by Philip Baruth
In the Unlikely Event... by Saxon Bennett
Chanda's Secrets by Allan Stratton
Lost Love Found by Bertrice Small
Vera's Valour by Anne Holman