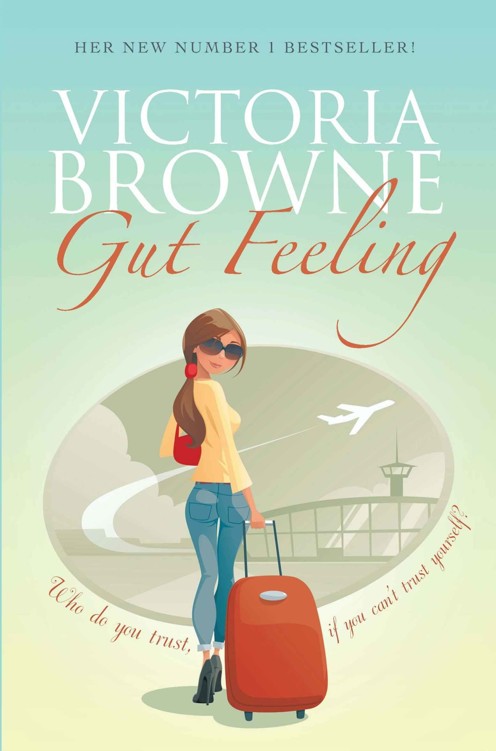 This Book novella is entirely a work of fiction. The names, characters and incidents portrayed therein are creations of the author’s imagination. Any resemblance to actual persons, living or dead, is purely coincidental.

The author’s rights are fully asserted. The right of
Victoria Browne to be identified as the author of this
work has been asserted by her in accordance with the
Copyright, Designs and Patents Act 1988.

All rights reserved; no part of this publication may be reproduced, stored in a retrieval system, or transmitted,
in any form or by any means, electronic, mechanical, photocopying, recording or otherwise, without the prior
written permission of the publisher. Nor be circulated in any form of binding or cover other than that in which it is published and a similar condition including this condition being imposed on the subsequent purchaser.

D
ave took in a deep breath as he straightened, heaving his bag of tools on to his shoulder for support. Standing on the pavement, he squinted in the brilliant sunlight looking at the oversized front door and stepped up to the intercom, blissfully unaware how this day would change his life path. A gold plaque caught his eye.

He reached out, pressed the button and waited.

‘I’m here to replace your window.’

There was a click and a buzz and he pushed the door open. Dave walked through the doorway into a huge entrance hall. The light in the hall dimmed as the door closed behind him. A deep emerald green carpet engulfed the floor where he stood, and a distinctive smell of dentist hit his nose dragged him briefly back to his childhood. His eyes wandered around, looking for the owner of the intercom voice.

As he stood waiting, his eyes took in paintings of fox hunts and an expensive-looking chandelier.

Suddenly a pretty-looking girl stepped out into view.

‘Dave Croft,’ he said, holding his hand out. ‘Where’s this window then?’

She smiled and led him to a large, elegant room at the back of the practice. It had a high ceiling and more paintings of men on horses playing polo. In one corner was a dental chair, in the other a grand Victorian walnut desk, behind which a large window overlooked a courtyard.

The dentist (or nurse or receptionist or whatever she was) seemed the only one in the building and Dave assumed the practice was closed as it was a Saturday. She returned five minutes later with a cup of black coffee. Smiling, she placed it on the desk then left him to his work while she pottered around the surgery, filing notes and restocking cupboards. Occasionally she chatted to Dave as she went from one surgery to the other. Finally, having finished her duties she took a seat to watch him finish off his handiwork.

The sun poured in through the window frame. Sweat beaded on his forehead as he balanced himself precariously on the window ledge. She poured a glass of water from the oasis, offering it to him with a quick smile. He took off his T-shirt to reveal a perfectly formed torso, he sat down in the dental chair legs spread and hanging down over either side.

‘How about you lay me back and give me a check-over?’ he said, shooting her an inquisitive look and a wink.

‘I think you mean a check-up.’ She turned her head to take a sip of water so he couldn’t see the smile on her face. The atmosphere had suddenly changed. ‘I’m not the dentist I’m, afraid—I’m only the nurse. Maybe I could book you an appointment for that check-up?’

He smiled politely then drank the water in one swift action.

Ashleigh wanted to bring the atmosphere back to a professional one and so explaining her role at the practice, giving him the impression that she was loyal, hard-working, caring and thoughtful of others; she seemed to enjoy helping people and was extremely polite with a nervous vulnerability about her as she spoke. There was also something about the calm tone of her voice that pricked his curiosity to know more about her. He responded by explaining his line of work, but was soon digressing with stories of his experiences with lonely housewives and the lavish places he had worked, fitting Velux windows and massive conservatories the size of a small house.

As he described one of the lush stately homes he had worked on, Ashleigh found herself admiring his handsome face and was also curious to know more about him beneath his seemingly brash persona. He seemed laddish, but she thought she could sense a more gentle side to him—he had a kind tone to his voice and he was politer than most builder types she had met. Her eyes moved down to his bare chest, which was very well defined.

My
God,
I
want
to
kiss
him
, she thought. No. I couldn’t make the first move, and certainly not such a forward move as that.

She struggled with her imagination for a while.

I
could
just
stand
up
and
walk
over,
then
straddle
him
and
see
what
his
reaction
is
.

She giggled in her head. He hadn’t mentioned a girlfriend, or wife. She thought about this for a moment. The more he talked, the more she watched his body language, and each tiny gesture made her quiver with desire.

Just
do
it
, she told herself.
Stand
up
and
walk
towards
him
.

She could feel herself rising out of her seat, her eyes meeting his. The atmosphere changed instantly as they looked at one another. His eyes were diverted from her stare for a moment as he slowly looked her up and down, admiring her body, then he fixed his gaze back on her face, looking into her eyes again.

Standing by the dental chair she gently put one leg over him, sitting on his lap and bending to kiss his full lips. She could feel her heart pounding hard against her chest and sensed his hand on her upper thighs, pulling her closer. The warmth of his tongue sliding around in her mouth, her hands gripping his broad shoulders.

A moment later she realised that she wasn’t sitting on top of a sexy, half-naked man but was still on her stool.

Bugger
, she thought as she was torn back to reality.

‘Em… yeah,’ she said warily, unsure what to say and wishing she had been listening.

Oh
shit
, she thought, her heart was racing and she was increasingly aware of how stupid she was sounding.

He smiled. ‘What about me?’

‘What
about
you?’ she replied.

This
should
throw
some
light
on
his
question
, she thought.

‘Would you go out for dinner with a guy like me, Ashleigh?’

Without thinking she burst out laughing with relief, then noticed the uneasy wide-eyed look on his face.

‘My friends call me Ash,’ she grinned. ‘And I’d love too. Sorry I laughed—I was just a bit shocked.’ The laughter, relief and excitement were still etched on her face.

As Ash walked home through Hyde Park towards her flat in Knightsbridge she giggled to herself thinking about her near gaffe, but quickly started grinning as she reminisced over the fantasy that had triggered it in the first place. She felt happy, like a small child after making a new friend; her cheeks were filled with colour and she had to refrain herself from a sudden urge to skip.

The July heat and the fumes from the city fused together so that distant buildings shimmered like a film of gas. Hyde Park was full of children and rollerbladers whizzing up and down. The sound of people enjoying the summer made Ash smile even more as she strolled along the path. She stopped and sat down on the grass, watching the rollerbladers showing off to each other. One blader tried to catch her eye by jumping on to a stone ledge then doing some fancy footwork in the hope that she was looking. She smiled to herself lying back on the grass, thinking again of Dave and what she should wear on their date next week. Gently she drifted off to sleep in the sun, listening to the sounds of skaters. When she woke up both the bladers and the sound of children playing had vanished.

Oh
my
God
, she thought, I’d better get home.

She had arranged to meet some friends and didn’t want to be late. She hurried through the park, jumped on a bus and got off just past Harrods.

As she walked into her mews just off Knightsbridge, she stopped and all the happiness and excitement instantly drained from her. Standing by the steps to her flat was Lee Preston, her ex, whom she had dumped five months ago. She had moved addresses not long after the break-up so he couldn’t find her, but now he was there, larger than life in front of her new home.

Lee was a good-looking, confident twenty-nine year old who worked for his father in a top law firm on the Strand. He still had a lot to learn as he had only been practising law for two years but his confidence overreached his knowledge. Even so, coupled with his father’s name, he was doing very well for himself and he knew it. Lee had been educated in Sweden, returning home only on holidays. By the time he was seventeen he was fluent in English, Swedish, German and Dutch.

Every school holiday he travelled home to England, spending each day at his father’s firm, watching and learning everything he could about law and how to influence people—which his father was extremely good at and more than happy to be teaching to his only son. Lee’s mother had died whilst giving birth, so Lee was now the sole heir to carry on the family name. His father had never remarried but had not been lonely either as he entertained many women—he never settled for just one, not when he could have two and sometimes three at a time. This trait had also rubbed off on his son.

Ash walked towards him, not quite knowing what to do. His sudden reappearance in her life made her realise that she still had feelings for him. She had been going out with friends, enjoying meeting men, being free to think of only herself, and getting used to the single life. But now as she looked at him, she could feel knots in her stomach as she remembered the bad times he put her through and she didn’t know if she could go back there again.

No
, she thought,
don’t
get
carried
away.
You
don’t
know
why
he
is
here
yet
—
just
smile
and
say
hi.
The
ball
is
in
your
court.