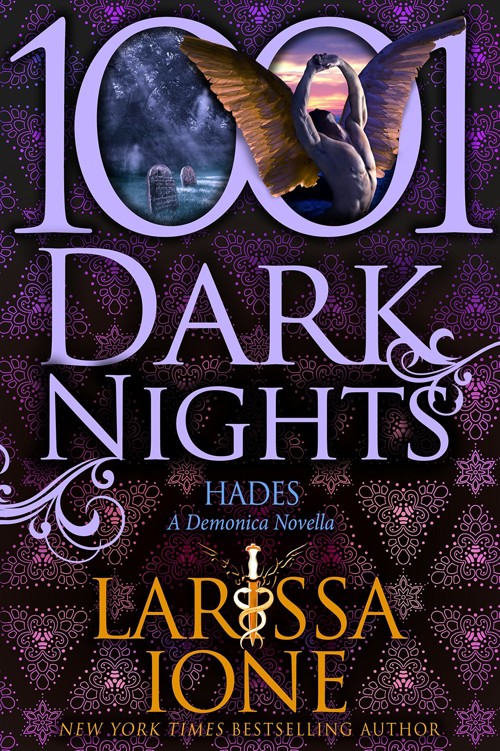 A fallen angel with a mean streak and a mohawk, Hades has spent thousands of years serving as Jailor of the Underworld. The souls he guards are as evil as they come, but few dare to cross him. All of that changes when a sexy fallen angel infiltrates his prison and unintentionally starts a riot. It’s easy enough to quell an uprising, but for the first time, Hades is torn between delivering justice — or bestowing mercy — on the beautiful female who could be his salvation…or his undoing.

Thanks to her unwitting participation in another angel’s plot to start Armageddon, Cataclysm was kicked out of Heaven and is now a fallen angel in service of Hades’s boss, Azagoth. All she wants is to redeem herself and get back where she belongs. But when she gets trapped in Hades’s prison domain with only the cocky but irresistible Hades to help her, Cat finds that where she belongs might be in the place she least expected…

Air Force veteran Larissa Ione traded in a career as a meteorologist to pursue her passion of writing. She has since published dozens of books, hit several bestseller lists, including the New York Times and USA Today, and has been nominated for a RITA award. She now spends her days in pajamas with her computer, strong coffee, and fictional worlds. She believes in celebrating everything, and would never be caught without a bottle of Champagne chilling in the fridge…just in case. After a dozen moves all over the country with her now-retired U.S. Coast Guard spouse, she is now settled in Wisconsin with her husband, her teenage son, a rescue cat named Vegas, and her very own hellhound, a King Shepherd named Hexe.

Every story presents unique challenges for an author, and every story makes the author appreciate those who help to make a book the best it can be. For the most part, Hades played nice, but I need to thank Liz Berry, Kim Guidroz, and Pamela Jamison for all their hard work in whipping Hades into shape. I love you, ladies! I just wish Hades hadn’t liked the whipping so much…

An excerpt from Base Instincts by Larissa Ione

(Persian:
شهریار
, “king”) married a new virgin, and then

The Aegis––
Society of human warriors dedicated to protecting the world from evil. Recent dissension among its ranks reduced its numbers and sent The Aegis in a new direction.

Emim––
The wingless offspring of two fallen angels.
Emim
possess a variety of fallen angel powers, although the powers are generally weaker and more limited in scope.

Fallen Angel––
Believed to be evil by most humans, fallen angels can be grouped into two categories: True Fallen and Unfallen. Unfallen angels have been cast from Heaven and are earthbound, living a life in which they are neither truly good nor truly evil. In this state, they can, rarely, earn their way back into Heaven. Or they can choose to enter Sheoul, the demon realm, in order to complete their fall and become True Fallens, taking their places as demons at Satan’s side.

Harrowgate––
Vertical portals, invisible to humans, which demons use to travel between locations on Earth and Sheoul. A very few beings can summon their own personal Harrowgates.

Inner Sanctum––
A realm within Sheoul-gra that consists of 5 Rings, each containing the souls of demons categorized by their level of evil as defined by the Ufelskala. The Inner Sanctum is run by the fallen angel Hades and his staff of wardens, all fallen angels. Access to the Inner Sanctum is strictly limited, as the demons contained inside can take advantage of any outside object or living person in order to escape.

Memitim––
Earthbound angels assigned to protect important humans called Primori. Memitim remain earthbound until they complete their duties, at which time they Ascend, earning their wings and entry into Heaven. See: Primori

Primori––
Humans and demons whose lives are fated to affect the world in some crucial way.

Radiant––
The most powerful class of Heavenly angel in existence. Unlike other angels, a Radiant can wield unlimited power in all realms and can travel freely through Sheoul with very few exceptions. The designation is awarded only to one angel at a time. Two can never exist simultaneously, and they cannot be destroyed except by God or Satan.

Sheoul––
Demon realm. Located on its own plane deep in the bowels of the Earth, accessible to most only by Harrowgates and hellmouths.