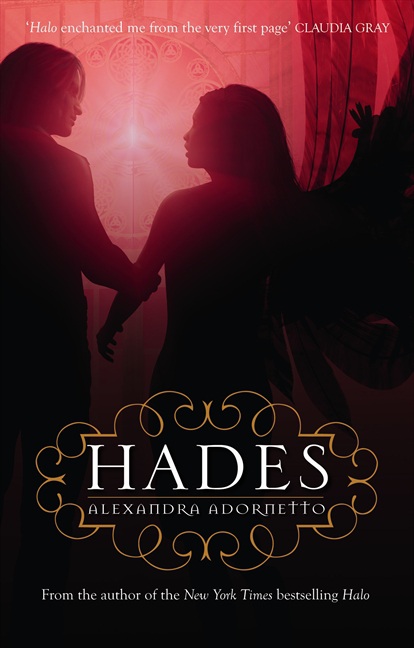 FOR EVERYONE WHO’S BEEN TO HELL AND BACK

How art thou fallen from heaven, O Lucifer,

Son of the morning!

The Devil went down to Georgia, he was

lookin’ for a soul to steal.

He was in a bind, ‘cos he was way behind;

he was willin’ to make a deal.

“Devil Went Down to Georgia”

The Kids Are All Right

WHEN the final bel sounded at Bryce Hamilton, Xavier and

I gathered our things and headed out onto the south lawn.

The weather forecast had predicted a clear afternoon, but

broke through and fingers of light danced across the

grounds, warming the back of my neck.

“Are you coming over for dinner tonight?” I asked Xavier,

linking my arm through his. “Gabriel wants to try making

Xavier looked across at me and laughed.

“I’m just thinking,” he said. “How come in al the paintings,

angels are depicted guarding thrones in Heaven or taking

out demons? I wonder why they’re never shown in the

“Because we have a reputation to uphold,” I said,

nudging him. “So are you coming?”

“You should try and get into the spirit of it,” Xavier said.

“Everyone around here takes it very seriously.”

I knew he wasn’t exaggerating; jack-o’-lanterns and

town in honor of the occasion.

would anyone want to dress up as ghosts and zombies? It’s

“Beth.” Xavier stopped walking and took hold of my

shoulders. “It’s a holiday, lighten up!”

He was right. I needed to stop being so wary. It was six

months now since the ordeal with Jake Thorn and things

couldn’t have been better. Peace had returned to Venus

Cove and I’d grown more attached to the place than ever.

Nestled on the picturesque Georgia coastline, the sleepy

little town in Sherbrooke County had become my home.

With its pretty balconies and ornate shopfronts, Main Street

was so quaint it could have been an image on a postcard.

In fact, everything from the cinema to the old courthouse

exuded the Southern charm and gentility of a long-forgotten

Over the past year the influence of my family had spread

and transformed Venus Cove into a model town. The

missions had more volunteers than they could handle, and

reported incidents of crime were so few and far between

time. Nowadays the only disputes that happened were

minor, like drivers arguing over who saw a parking space

first. But that was just human nature. It couldn’t be changed

and it wasn’t our job to try and change it.

grown even closer. I looked across at him. He was just as

breathtakingly beautiful as ever. His tie hung loose and his

blazer was slung casual y over one shoulder. I could feel his

taut body occasional y brushing against mine as we walked

side by side, our footsteps fal ing in time. Sometimes it was

easy to think of us as one entity.

Since the violent encounter with Jake last year, Xavier

had hit the gym even harder and thrown himself into sports

more vigorously. I knew he was doing it so he’d be better

equipped to protect me, but that didn’t mean I couldn’t enjoy

the perks. Xavier had more definition in his chest and

washboard abs. He was stil slender and perfectly

proportioned, but I could see the muscles in his arms

rippling beneath the fine cotton of his shirt. I looked up at

and ful lips. In the light of the sun, his walnut-colored hair

was streaked with gold and his almond-shaped eyes were

like liquid blue topaz. On his ring finger he now wore the gift

attack. It was a thick silver band etched with three symbols

of faith: a five-point star to represent the star of Bethlehem;

a trefoil to honor the three persons of the Holy Trinity; and

the initials IHS, an abbreviation of
Ihesus
, the way Christ’s

name was spel ed in the Middle Ages. I’d had an identical

version of a promise ring. Another person who’d witnessed

Father, but Xavier had strength of mind and spirit. He’d

made a commitment to us and I knew that nothing could

persuade him to break it.

My train of thought was broken when we bumped into a

parking lot. I knew some of them by name and caught the

tail end of their conversation.

“I can’t believe Wilson hooked up with Kay Bentley,” a

from whatever misadventure had taken place over the

weekend. I knew from experience it probably involved a

“It’s his funeral,” someone muttered. “Everyone knows

“Don’t worry, man, pretty sure they were out on the back

“I was so wasted, I don’t remember a damn thing,”

“I remember you tried to hook up with me,” replied a boy

named Wesley in his lilting accent. He contorted his face

“Whatever … it was dark. You could do a lot worse.”

“Not funny,” Wesley growled. “Someone posted a picture

Xavier thumped his friend on the back as he sauntered

past. “He’s real y built from al those hours on the

Chevy Bel Air convertible. I climbed in, stretched out, and

breathed in the familiar smel of the leather seats. I loved

the car almost as much as Xavier did now. It had been with

us from the very beginning, from our first date at

Sweethearts Cafe to the showdown with Jake Thorn at the

cemetery. Though I’d never admit it, I’d come to think of the

Chevy as having a personality of its own. Xavier turned the

key in the ignition and the car roared to life. They seemed

to move in sync—as if they were attuned to each other.

“So have you come up with a costume yet?”

“For what?” I asked blankly.

Xavier shook his head. “For Hal oween. Try to keep up!”

“Not yet,” I admitted. “I’m stil working on it. What about

“How do you feel about Batman?” Xavier asked with a

wink. “I’ve always wanted to be a superhero.”

“You just want to pretend you drive a Batmobile.”

Xavier gave a guilty smile. “Damn it! You know me too

leaned across and pressed his lips against mine. His kiss

was soft and sweet. I felt the outside world fal away as I

melted into him. His skin was smooth beneath my fingers

and his scent, fresh and clean as ocean air, enveloped me.

It was mingled with a touch of something stronger—like

vanil a and sandalwood combined. I kept one of Xavier’s T-

The Land Beyond All Dreams by Fields, Bryan
Glass Ceilings by Hope, Alicia
A Templar's Apprentice by Kat Black
The Song Is You by Megan Abbott
Laina Turner - Presley Thurman 07 - Cupids & Crooks by Laina Turner
The President's Daughter by Mariah Stewart
Spice & Wolf I by Hasekura Isuna
The Billionaire's Triplets (A Steamy Contemporary Romance Novel) by Mia Caldwell
Smelliest Day at the Zoo by Alan Rusbridger
Scavengers by Christopher Fulbright, Angeline Hawkes