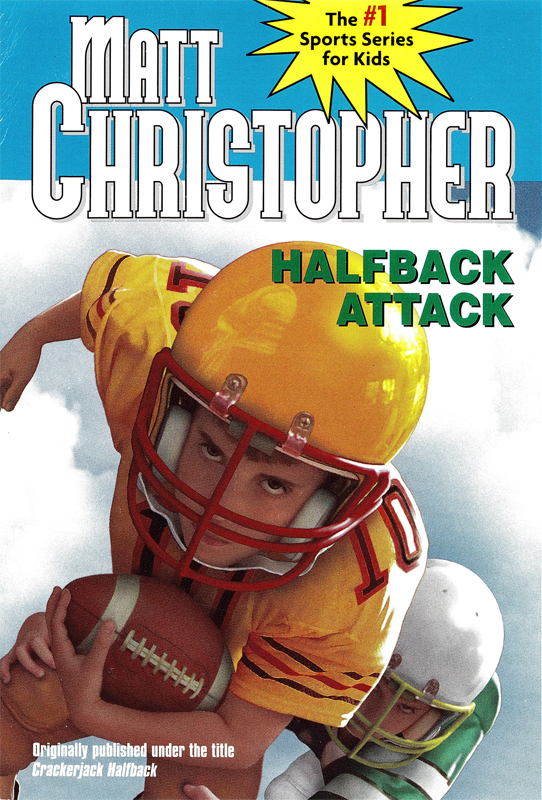 To Mike and Jean

The warm Saturday morning sun beat down on the fans filling the bleachers that lined one side of the eighty-yard football
field. It beat down on Freddie Chase’s back as he crouched in position behind right guard and right tackle.

The Sandpipers, dressed in bright yellow uniforms, formed a tight line as they faced the green-uniformed Catbirds. The ball
was on the two-yard line, and the Catbirds were trying for the extra point.

The quarterback took the snap, turned, and handed it off to the fullback. The fullback tucked the ball against his chest and
charged toward the right side of the Sandpipers’ line. Freddie plunged forward, closing the narrow hole that split open between
right guard Harry Lott and right tackle Steve Cook.

But all at once a white helmet with a bird painted on its front hit him on the chest. He bounced back like a rubber ball.
A whistle pierced the air, and Freddie saw the boy in the white helmet sprawled over the goal line.

The Catbirds scrambled excitedly to their feet and let out a lusty yell.

“That’s fourteen for them,” Dick Connors said sourly. He was captain and quarterback for the Sandpipers. “What are we going
to do — lose every game this year, too?”

Freddie knew exactly how Dick felt. The Sandpipers hadn’t won a game in two years. A very sad record, indeed. The first league
games of the season had been played last week, and the Sandpipers had lost theirs to the Flamingos, 21–7.

So far, in today’s game, the Sandpipers had been doing better. Freddie, who played both offense and defense, had set up a
touchdown play in the first quarter by intercepting a pass. He had run twenty yards before a Catbird had brought him down.
On the next play Dick had faked a handoff to Freddie,
at right halfback, then passed to right end Milt Grady. Milt went over for the touchdown, and fullback Dennis Yates bucked
for the extra point.

But the Catbirds had one of the speediest fullbacks in the league, Ernie Moody. Every time he carried the ball he gained ground.
He had a funny habit. He was always smiling and clapping his hands. Freddie had thought that Ernie was doing this to keep
warm, until he realized that after running around so much Ernie really didn’t have to clap his hands anymore. But Ernie kept
on doing it, and Freddie knew then that it was just Ernie’s way.

The teams lined up for the kickoff. The referee signaled for the game to start, and Ernie Moody kicked off for the Catbirds.

Dick Connors caught the end-over-end boot on his twenty-yard line and carried it to his thirty-five.

Quick as light he leaped to his feet. “Huddle!” he said.

While they were in the huddle, two players pushed themselves into the group.

Freddie tensed. So far he had been pulled out of the game for only a few minutes in the first quarter.
He didn’t know why, except that he knew Coach Hank Sears believed in playing every boy.

“Steve and Dave — out!” one of the substitutes said.

“Crisscross buck,” said Dick. “Bucky takes it. On the two!”

The play skipped swiftly through Freddie’s mind. He wished he carried, though, instead of Bucky.

Center Stookie Freese snapped the ball. Dick took it and spun around. Freddie shot crosswise in front of him and reached for
the ball. Then he pulled his arms against him, as if he had the ball, and rushed through the hole between left guard and tackle.

Right after Freddie did his part, Bucky Jensen raced crosswise in front of Dick from his left halfback
position. Dick pushed the ball into Bucky’s arms, and Bucky plunged through the hole between right guard and tackle. He kept
going, dodging and leaping just out of reach of would-be tacklers. Then a linebacker pulled him down on the Catbirds’ thirty-nine.

Second down and four yards to go.

Dick grinned as the boys huddled again. “Nice going, Bucky. Let’s try it again. Only this time Freddie carries. On the three!”

Freddie’s heart pounded as the team broke from the huddle. This was what he loved more than anything—running with the ball.
It was very seldom that Dick gave him the chance.

The ball snapped. Helmets clattered as they smacked against each other. Yellow and green jerseys mixed like a bowl of tossed
salad. And then a marker was dropped and a whistle shrilled.

The referee was striking his hips with his hands.

The offside signal! And it was against the Catbirds!

Now the ball was on the Catbirds’ thirty-four-yard line. It was first and ten.

“The same play,” said Dick in the huddle.

Freddie took the handoff from Dick and plunged through the hole in the left side of the line. He ran hard, the football gripped
tightly against him. Then he was hit. He went down, and it seemed as if the whole Catbirds line was piled on top of him. When
it got off, he rose to his feet.

“Second down and six,” said the referee.

Dick suggested a pass play. On “Hike!” Dick stepped quickly back with the ball. He faked to Freddie, who ran to the left.
Then Dick heaved a long, spiraling pass toward the left side of the field. It was intended for Bucky.

Suddenly a player in green pulled the ball out of the air and started running with it the other way!

A bit of fear went through Freddie. The player o was running along the sideline. There was nobody between him and the goal
line except Freddie: Only Freddie could get to the Catbird runner and stop him from making a touchdown.

Freddie started to run. He recognized the man in green now. It was Ernie Moody, the Catbirds’ star player. Even now Ernie
seemed to be smiling that silly smile of his, and saying,
Come on, kid! I dare you to tackle me! 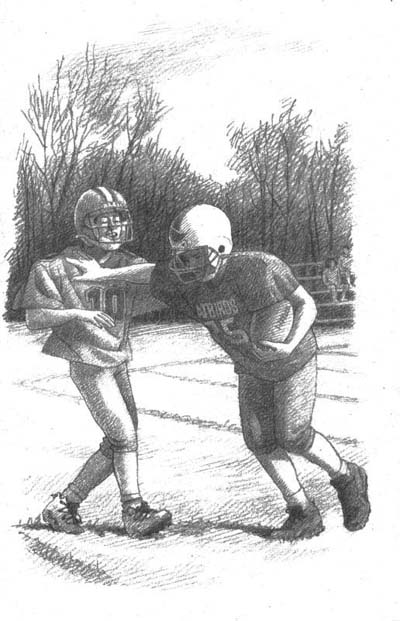 But as Freddie drew near to Ernie and saw how hard Ernie was running and how high his knees rose with every step, that bit
of fear grew into mountainous size.

He reached out for Ernie, standing up instead of diving at Ernie’s legs as he should have. Ernie stiff-armed him and drove
him back so that he almost went sprawling.

Ernie galloped on for the touchdown.

A roar sprang from the Catbirds’ fans. Then Ernie bucked for the extra point. He didn’t make it.

A moment later a harsh voice snapped at Freddie’s elbow: “Out, Freddie. The coach has something to say to you!”

Freddie hardly glanced at Ted Butler, who replaced him. He lowered his head and raced off the field.

Coach Hank Sears met him at the sideline. He towered over Freddie like a skyscraper, his dark hair whipping in the wind.

“Freddie! You let him go by! You didn’t even try to tackle him!”

Freddie made no reply. He kept his eyes at a level with the coach’s belt.

“Freddie!” Mr. Sears’s voice lowered a pitch. “I saw you do that same thing in our game against the Flamingos last week. I
thought then that you were afraid to tackle. I wasn’t sure.”

So Mr. Sears had noticed. Now he’d realize that Freddie wasn’t the wonderful backfield man he had
expected him to be. What kind of a backfield man was he, if he was afraid to tackle?

From the bench, Freddie watched Ernie boot the ball far into the Sandpipers’ territory. Fullback Dennis Yates caught it and
ran it back to his thirty-two.

Freddie wondered if he’d get a chance to go in again. He wouldn’t be afraid to tackle the next time. He promised himself that.

But hadn’t he promised himself that before? Dozens and dozens of times. And just when he’d have to make a tackle, what happened?
He’d get scared all over and the runner would race right past him!

If he was going to play defensive linebacker as well as offensive halfback, he’d have to get over that fear — soon.

Coach Sears talked to the boys awhile, telling them what they had done wrong and what they should have done. Freddie kept
behind some of the
bigger boys — the tackles and the guards — so that Coach Sears wouldn’t notice him and say something about his not tackling.
He felt sure some of the boys knew, but if Coach Sears broadcast it now — well, he just wouldn’t be able to take it, that’s
what.

They returned to the bench and talked to pass the rest of the minutes.

Freddie was still sitting there when the second half started. Dennis kicked off. It was Ernie Moody again who caught the ball
on his twenty and ran it back. He got as far as his twenty-eight, where Dick Connors and end Milt Grady smeared him.

The Catbirds gained a first down in three plays. Freddie began to fidget on the bench. He couldn’t forget that he was to blame
for the Catbirds’ getting the last touchdown.

Freddie leaped off the bench with joy, practically forgetting why he was there.

“Freddie, get in there,” barked Coach Sears. “Send out Ted.”

Freddie looked up at the coach. “Did you —”

“Will you hurry?” said Coach Sears. “We haven’t got all day.”

“Yes, sir!” replied Freddie. He clipped on his chin strap and raced out onto the field.

He ordered Ted Butler out and saw the looks that came over the faces of the other players. Especially Dick Connors’s, the
captain, and fullback Dennis Yates’s.

They broke from the huddle and went quickly into a T-formation. Dick, his hands stretched down close to center Stookie Freese’s
legs, barked signals.

Stookie snapped the ball. Dick took it and went back. He faked a handoff to Dennis, then shot a forward pass across the scrimmage
line toward the right side of the field. Milt caught it, went five yards, and was tackled.

“Second and two!” said the referee.

“Let me carry it!” said Freddie.

All eyes swung to him, big and wide and unbelieving.