Read Hands of the Ripper Online

Hands of the Ripper 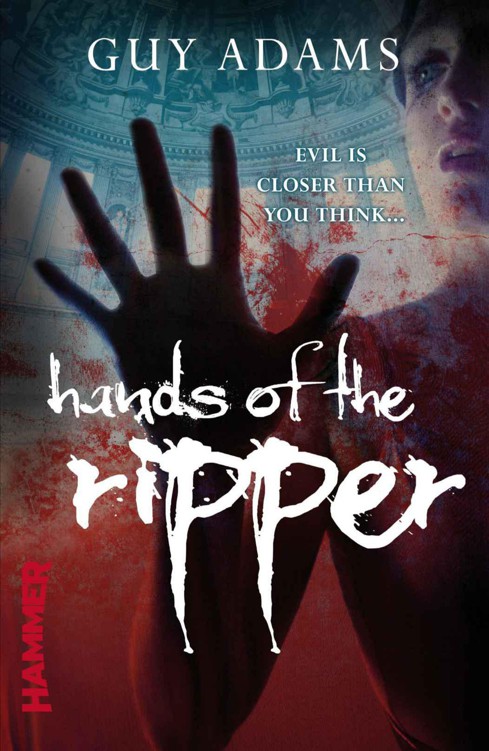 One: In the Rain with the Dead

Two: ‘Why Are You Doing This?’

Three: Lying in the Dark

Nine: One Knock for Yes

Ten: The Tragedy of the Elizabeth

Thirteen: ‘They’ll Kill Someone One of These Days’

Fourteen: The Life and Death of Shaun Vedder

Sixteen: The Dead Are Not Jealous

On a cold, wet night recently widowed psychology lecturer John Pritchard visits spiritualist Aida Golding with his son. Although wary something has driven him here. And he is drawn to a troubled young woman who is trying to contact her child. Something about her intrigues him and despite his doubts he continues to attend meetings.

One night at an intimate séance in Aida’s house the lights go out and one of the group is brutally murdered. John has his suspicions but he can’t prove anything. He senses that Aida has some hold over the girl and he offers her a place of refuge in his home. But the past haunts Anna in the most chilling of ways. And all too soon John realises he’s made a terrible mistake…

‘Guy Adams is either barking mad or a genius, I haven’t decided.’ Mark Chadbourn

The author of the novels
The World House
and its sequel
Restoration
, Guy Adams gave up acting five years ago to become a full-time writer. This was silly, but thankfully he’s kept busy, writing bestselling humour titles based on TV show
Life on Mars
or
Torchwood
novels
The House That Jack Built
and
The Men Who Sold The World
.

He has also written a pair of original Sherlock Holmes novels,
The Breath of God
and
The Army of Doctor Moreau
as well as a biography of actor Leonard Rossiter and an updated version of Neil Gaiman’s
Don’t Panic: Douglas Adams & The Hitch-Hiker’s Guide to the Galaxy
and
Kronos
, a novelisation of the classic Hammer film,
Captain Kronos Vampire Hunter
.

YOU GET THE
impression the story is set around 1901, shortly after the death of Queen Victoria. More to the point, about 13 years after the hideous Whitechapel murders popularly ascribed to Jack the Ripper.

The protagonists are Dr John Pritchard, a well-heeled London psychiatrist, and a mentally disturbed 17-year-old orphan called Anna. With Pritchard taking Anna under his wing and making every effort to mould her into a well-adjusted young woman, it’s hard to resist the idea that
Hands of the Ripper
is Hammer Film Productions’ blood-spattered take on the Bernard Shaw play
Pygmalion
.

It was an ingenious notion, replacing Shaw’s capricious phoneticist with a stiff-backed psychiatrist and his Cockney flower girl with a tragically conflicted teenage murderess. And it resulted – thanks, in large part, to moving performances from Eric Porter and Angharad Rees, plus a rhapsodic score by Christopher Gunning – in a film that is as much a warped weepie as a gruesome body-count thriller. But where did that ingenious notion originate?

Sadly, the genesis of
Hands of the Ripper
survives only sketchily in Hammer’s records. The first reference to the project is in September 1970, when company minutes merely record the title and the name of the proposed screenwriter – Spencer Shew. The next reference is in December, when Peter Sasdy is hired as director. Then, before you know it, it’s January 1971 and the film is actually in production at Pinewood.

But, on release in October, the film disclosed an interesting detail in its opening credits. For the screen play was attributed to television writer L W (Lewis) Davidson, ‘from an original story by Edward Spencer Shew’. Then, to muddy the waters yet further, Sphere Books brought out a ‘novelisation’ by Shew himself, gaudily decorated with a front-cover photo of Porter discovering Marjie Lawrence lying very dead in a blood-filled bathtub.

I use inverted commas around the word ‘novelisation’ because it’s by no means clear that that’s what the book actually was. For Shew’s version differs from the film in many fundamental ways, suggesting that it may have been an as-yet-unpublished novel when submitted to Hammer, or perhaps even an epic-length ‘treatment’. Pritchard, for a start, isn’t a psychiatrist; he’s a physiologist. (And he’s Sir Giles, not plain Dr John.) What’s more, the story is set in 1888 and deals in quite a lot of circumstantial detail with the Ripper murders themselves. In other words, Anna is not Jack the Ripper’s daughter, struggling with her inherited homicidal compulsions. She actually
is
Jack the Ripper.

Clearly, then, profound changes were made in translating Shew’s ‘treatment’ to the screen, and it has to be said that most of them were for the better. Shew’s prose is often quirkily diverting, and his story certainly contains the germ of the
Pygmalion
parody referred to above. But the novel’s credibility is severely compromised by the fact that Anna is possessed by not one, but two, departed souls.

One of them is Franz Liszt, no less, making Anna something of a piano prodigy. The other is a notional serial killer who terrorised Liverpool back in the 1820s, a murder spree reproduced in London by Anna. The book, therefore, is divided into two sections – ‘Hands Beneficent’ and ‘Hands Malevolent’. Maybe Hammer were worried about the Shew version’s similarity to Maurice Renard’s classic 1920 novel
The Hands of Orlac
, which had already been filmed three times.

Shew was for many years a crime correspondent for the
Daily Express
, and was also the author of two highly regarded true crime collections published in the early 1960s. Among other things, these books revealed his uninhibited approach to subtitles. The first,
A Companion to Murder
, was subtitled so: ‘A Dictionary of Death by Poison, Death by Shooting, Death by Suffocation and Drowning, Death by the Strangler’s Hand 1900-1950.’

That should be quite enough to be going on with, you might think, but Shew was only getting started. For the next volume,
A Second Companion to Murder
, he really went for broke with a truly staggering litany: ‘A Dictionary of Death by the Knife, the Dagger, the Razor, the Axe, the Chopper, the Chisel; Death by the Iron File, the Marline Spike, the Hammer, the Poker, the Bottle; Death by the Jemmy, the Spanner, the Tyre Lever, the Iron Bar, the Starting Handle; Death by the Sandbag, the Sash Weight, the Mallet, the Half-Brick, the Stick, the Stone; Death by the Fire Tongs, the Butt End of a Revolver, the Metal Chair, etc. 1900-1950.’ Commendably, Shew’s publishers managed to squeeze this astounding recital, not just onto the title page, but even onto the front cover.

Shew, then, was intrigued by the more imaginative, not to say baroque, forms of murder, which makes his version of
Hands of the Ripper
all the more surprising. For, ghastly though the real Ripper’s murders were, they featured none of the startling variations in weaponry so scrupulously catalogued in Shew’s subtitles. Oddly enough, the killings in the film version of
Hands of the Ripper
are much more in Shew’s outré line, picking up the murderous poker specified in Shew’s list but adding such nasty innovations as a pair of lorgnettes, a handful of hat-pins, and a truly novel conjunction of a broken hand-mirror and a full-length cheval glass.

And now, four decades later,
Hands of the Ripper
has been given a new and exciting makeover by the estimable Guy Adams. Radical, too. Apart from any thing else, the story is updated to the present day – which, of course, brings with it a whole new Ripper. It just goes to show that Spencer Shew got hold, however shakily, of a truly durable idea all those years ago. To see how that idea works out in the 21st century, just read on…

An Overture of Night Music

FIRELIGHT GLITTERS LIKE
exploding stars against the metal bars of her cot. Anna extends a finger, trying to catch the light and own it. It escapes her but she laughs anyway.

The shouting of her parents seems to come from far away when she focuses on the light. As if it’s not in the same room at all. As if it comes from somewhere so perfectly elsewhere that it could never possibly harm her.

Sometimes the cot feels like a cage. She has outgrown it now but Daddy likes her to be kept inside it when he is home. It makes her think of the pictures of the lions and tigers that she sees in the picture books Mummy lets her read. One day, she thinks, she may even roar like them. She may even roar as loud as Daddy.

He is roaring now, burning as brightly as the fire in the grate.

No, she thinks, not quite. And returns her gaze to the sparkle on the cot bars.

She doesn’t see the first spray of blood that spits against the cheap wallpaper. She only becomes aware that Mummy’s broken when she drops to her knees in front of the cot, a bloody, cupped palm held to her face. This is not unusual. Daddy often has to help both of them shut their mouths. Daddy is clever like that; he knows how to make silence happen. He also knows how to make the world fill with noise. It’s the latter he seems to be doing now because it’s not just Mummy’s screaming that threatens to tear her attention away from the glittering beauty of the firelight. There is the building sound of sirens, ‘Night Music’ her daddy often calls it as he looks out of the window and watches the police cars and fire engines as they drive past.

‘The natives are getting restless,’ he’d often say, ‘the jungle is alive with them!’

Anna is sometimes confused by this. She has seen pictures of jungle and it doesn’t look like the grey concrete world outside their front door. The jungle is a wild place, full of colour and brilliant, beautiful animals.

Mummy is holding up her hands, showing Daddy that she understands, showing him that she will be quiet now. Her words come jumbled up with bubbles, because her nose is bleeding so badly. Like the Little Mermaid singing under the sea. Daddy’s not sure he believes Mummy’s promises, Anna can tell, he’s pacing up and down, circling Mummy like …

(A tiger in the jungle?)

The Night Music is getting louder and it seems to be driving Daddy mad. Normally he likes the noise it makes, sings along with it in front of the window, howling at the glass. Tonight it makes him twitch and shout. He is scratching at himself, tearing at his shirt as if he is covered in small insects. He reminds Anna of the cat they had for a short while, the way it used to scratch, kicking at itself with its hind leg. Daddy didn’t like it doing that, that’s why he made it go away.

Daddy walks over to the fireplace and reaches for the poker. Anna is pleased, she thinks that he is going to make the fire burn even brighter now, make the light dance more brilliantly than ever before. He is not. For Daddy, the fire has never burned brighter.

He carries the poker over to Mummy and beats at her with it. Perhaps she is full of coals, thinks Anna, perhaps she needs to be made better, encouraged into heat. It doesn’t seem to be working. It’s making her cry out again and Anna knows that is never a good idea and wishes she could tell her mummy to shut up as she’ll only make Daddy angry with all that noise. But Anna doesn’t say a word, Anna just wants to be invisible behind the bars of her cot. She watches the fire, choosing its warm orange over Mummy’s deep red. She listens to the crackling of the flames rather than the pop and brittle snap of Mummy as Daddy hits her again and again with the poker.