Read Handsome Brute: The True Story of a Ladykiller Online

Handsome Brute: The True Story of a Ladykiller 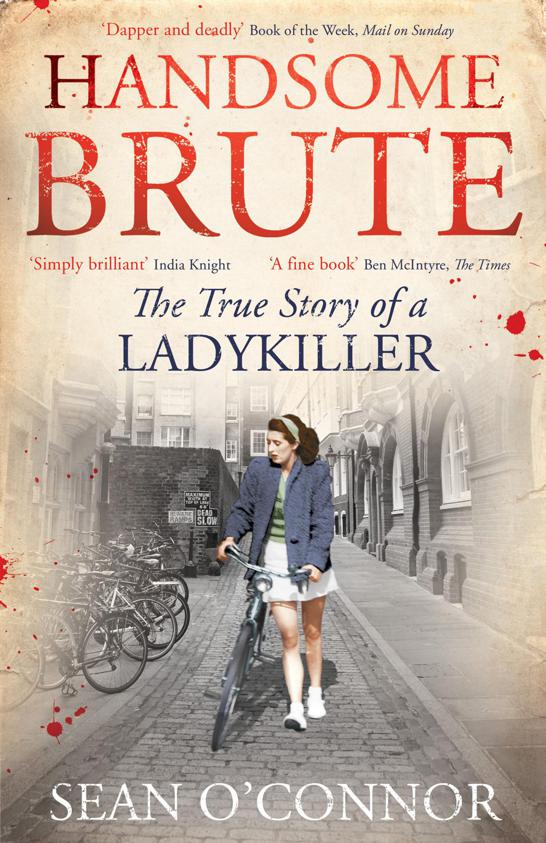 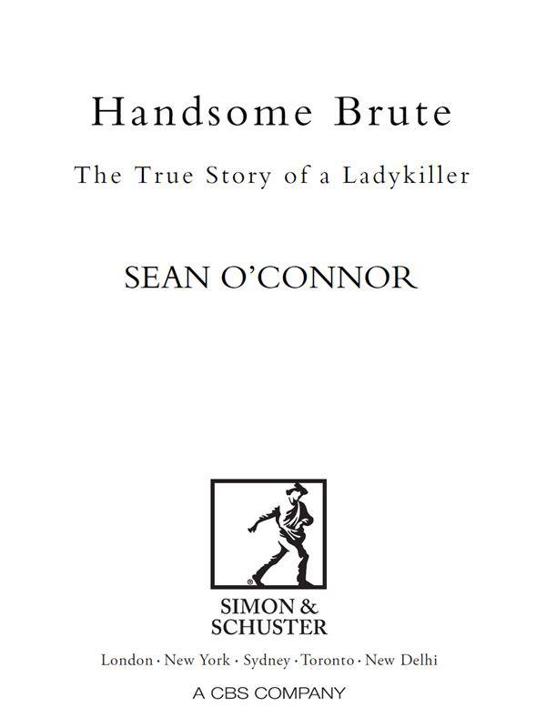 The right of Sean O’Connor to be identified as the author of this work has been asserted by him in accordance with sections 77 and 78 of the Copyright, Designs and Patents Act, 1988.

The author and publishers have made all reasonable efforts to contact copyright holders for permission, and apologise for any omissions or errors in the form of credit given. Corrections may be made to future printings.

This is an astonishing case, is it not? The probability is, of course, that Heath knows no more about the state of his mind than any of us do about our own minds. It is something that is part of his nature; it is natural; to him it would not appear extraordinary.

Is there any cause in nature that makes these hard hearts?

10 Out of South Africa

PART FOUR: The Twisting of Another Rope

So much for Raffles. Now for a header into the cesspool.

Heath’s story is not a pretty one . . . it will be remembered as a sort of sadistic bloodbath not untypical of an age of crime where sadism and bloodbaths are, if anything, coming to be the rule rather than exceptions.

W
ith the passing of the Second World War generation into history, the story of Neville George Clevely Heath, once regarded as ‘the most dangerous criminal modern Britain has known’
1
and ‘the most atrocious murderer in modern times’,
2
has dwindled in our collective memory in the sixty-eight years between 1946 and today.

Heath’s reputation – once a byword for sadistic perversion and psychopathic violence – has not held the popular imagination as Christie’s or the Moors Murderers’ have. This is despite the fact that the case caused a media furore at the time, providing gruesome (and titillating) copy in newspapers dominated by the grey realities of austerity Britain: the national debt, the initiation of bread rationing and the painfully slow process of demobilization. The case was a gift for the tabloids with its sensational ingredients of aberrant sex and violent death, set in a world undergoing a process of radical change. The blond, handsome Heath, still tanned from his time abroad, was a great distraction for a nation in flux, exhausted by six years of wartime privation and looking towards an uncertain future. All the elements of the case came together to make a classic English narrative: a charming but vicious protagonist ridden with class anxiety, an ambitious detective, a national manhunt for a killer on the loose.

From a twenty-first-century perspective, the background to the murders – the pubs, bars and nightclubs of west London and the genteel hotels of south-coast seaside resorts – conjure a lost, very English world. It’s the socially and sexually anxious environment of Agatha Christie and Terence Rattigan, filtered through the prism of Patrick Hamilton’s drink-sodden novel,
Hangover Square
. But despite the classic and comfortable mid-twentieth-century English setting, the savagery of the crimes and Heath’s at once charming, yet pathological, personality anticipate an American style of slaughter much more akin to Bret Easton Ellis’s
American Psycho
or Jim Thompson’s
The Killer Inside Me.
And despite the period details – the Royal Air Force slang, the pipe clenched in the teeth and the old school tie – Heath’s laconic attitude both to his crimes and to the prospect of his own extinction is redolent of the casual cruelty of contemporary murderers like John Maden, who killed his niece Tia Rigg in Manchester in 2010, ‘because I felt like it’. When he was finally arrested, Heath responded in a similarly offhand manner: ‘Oh, all right.’
3

Such was the appetite for news of the case at the time, that in the summer of 1946 when newspapers were generally restricted to four skimpy pages because of newsprint rationing, the Heath case received enormous coverage. In reporting the trial, journalists took licence to report – in surprising detail – the most graphic revelations of the murders as well as the more salacious details of Heath’s sex life. The trial offered an opportunity to examine the darker avenues of sexuality in modern Britain – and this was all available over the breakfast table with the post and the toast. Heath’s friends even negotiated a newspaper deal for him in order to give his exclusive side of the story.

Curiously, given the nature of his crimes, the audience for Heath’s story was primarily female. Some women, it was reported, queued for fourteen hours outside the Old Bailey in the hope of getting just a glimpse of this most notorious of ladykillers. ‘Rarely’, noted the
People,
‘have women been so strangely fascinated by a murder trial.’
4

For a society struggling to negotiate its place in the new world order, Heath’s story articulated an alarming new postwar anxiety. With millions of soldiers, sailors and airmen returning to Britain – many of them trained killers – the Heath trial exposed the tension created by re-integrating servicemen
en masse
into the hugely changed communities and families they had left years earlier. Newspapers of the time are filled with tragic stories of servicemen returning home and killing their estranged wives, unable to settle into the brave new, post-war world. Commenting on the case of one former soldier who had done just that, which resulted in the conviction being commuted to manslaughter, Mr Justice Charles warned that ‘the law of the jungle’
5
was creeping into English courtrooms. The
News Chronicle
worried that ‘it would seem from some recent murder trials that the unfaithful wife of a serviceman is an outlaw with no benefit of law whatsoever. She may be murdered with impunity.’
6

Heath’s career encapsulated the civilian population’s particularly ambivalent attitude towards pilots from Bomber Command. Taking their lead from Winston Churchill, the public had lauded ‘the Few’, the brave boys in Spitfires who defended the nation from invasion in 1940, dog-fighting the Luftwaffe across the skies above the South Downs. But Bomber Command had flown into Europe causing devastation on an unprecedented scale, wiping out civilian and military targets alike with a seeming disregard for human life. They were at once glamorous but deadly – the creators of those iconic symbols of wartime destruction, Berlin, Hamburg and Dresden.
7
In his study of the RAF during World War II,
The Flyer
, Martin Francis observes ‘a broader ambivalence among the public and the men of the RAF themselves, as to whether they were chivalric knights of the air or merciless agents of violent destruction’.
8
Neville Heath – the charmer turned killer – absolutely embodies this disorientating anxiety, and this may well be a key to the extraordinary interest the public took in the case; for Heath’s story dramatized one of the unspoken fears of the age.

As early as 1947, only a year after the murders, a serial killer with remarkable similarities to Heath appears in Ken Annakin’s ostensibly upbeat film,
Holiday Camp
.
9
Dennis Price plays Squadron Leader Hardwick, a suave ex-RAF pilot, charming lonely women with tales of his wartime exploits, whilst hiding his true nature as the ‘mannequin murderer’. The references to Heath would have been very clear to cinema-goers at the time. The film attempts to examine the new democracy ushered in by the Welfare State. All strata of society get to take a holiday – even if that only means a chilly week at Butlins in Bognor. But despite the optimism for the new Albion inherent in the film, it’s clear that the murderous Squadron Leader Hardwick – and Heath himself – articulated the unease in British society at welcoming home a whole generation of men, many of whom had killed during the war. Having fuelled and channelled these violent instincts on behalf of the state, where were they to be directed now? And, indeed, could they be channelled at all? Or were these dark instincts to become a reality of the post-war world?
10

The fascination with Heath continued after his trial and began to fill more than just newspaper copy. Two sensational monographs about the case were published with indelicate haste after Heath’s trial, both by journalists who claimed to have known Heath personally. Gerald Byrne’s
Borstal Boy: The Uncensored Life of Neville Heath
was published in 1946, printed to economy standards and bearing a suitably sombre black and white cover. Full of salacious (and often unsubstantiated) detail, it is a paperback shocker masquerading as a morality tale, ‘of a man . . . who stopped at nothing to satisfy his own craving for position, money and power’.
11

Sydney Brock’s
The Life and Death of Neville Heath
followed swiftly in 1947. Though the text attempts a serious examination of Heath’s life and crimes from a first-hand point of view, it has a Mills & Boon-style subtitle:
The Man No Woman Could Resist
. The cover of this railway bookstore paperback depicts a sexy young woman in a saucy short skirt – a whip to her side, hanging sinisterly in mid-air. The cover promises a ‘Sensational-Sadistic-Romantic-True Story’.
12
This uncomfortable tone – exploiting the case as soft pornography – came to dominate non-fiction writing about Heath. James Hodge, who published the much-admired
Notable British Trials
series, had hesitated about covering the Heath trial at all, precisely because the facts of the case could too easily result in something of dubious value, bordering on exploitative porn. Eventually Macdonald Critchley successfully edited the case in 1951, winning resounding praise from Hodge:

Crash by Carolyn Roy-Bornstein
Now I'll Tell You Everything (Alice) by Naylor, Phyllis Reynolds
Playing Up by Toria Lyons
Unleash the Night by Sherrilyn Kenyon
Terminated by Rachel Caine
The Bacta War by Stackpole, Michael A.
Run with the Moon by Bailey Bradford
Strike Back by Ryan, Chris
Surrender to the Devil by Lorraine Heath
Darkman by Randall Boyll