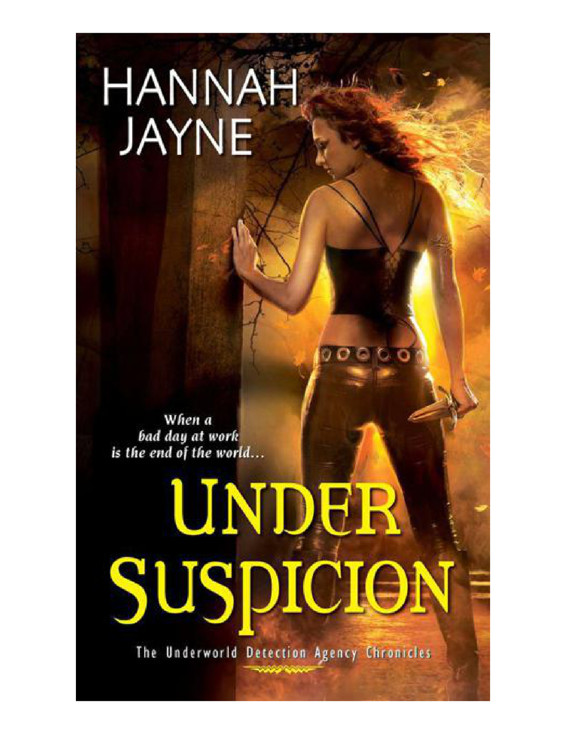 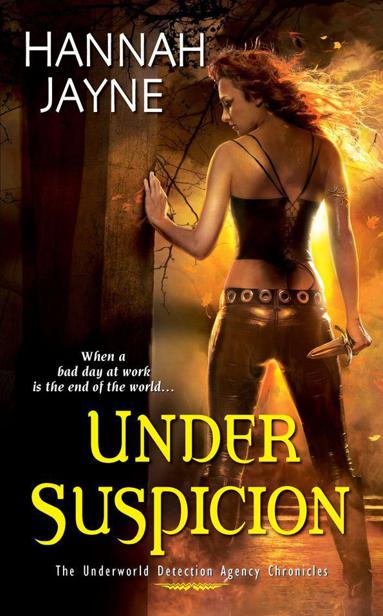 “Do you know what he hit you with?” I asked.

Bettina wagged her head. “I’m not sure. It looked like some sort of pipe.”

Bettina shrugged. “I’m not really sure what one of those look like.”

I wasn’t entirely sure either, but whether Bettina’s assailant was wielding a tire iron or a magic wand made a world of difference. At least it did here, in the Underworld.

“He wasn’t done either,” Bettina said. “He—he—was going to hit me again, in the head, but the game must have let out because people started to fill the streets. He told me that my kind needed—needed to be erased.”

“Your kind? Did he—did he know you were—”

My saliva went sour and suddenly my skin felt too tight.

Demons walk among us every day. A vampire might be your neighbor; the corner store might be run by a werewolf or a troll. There is a thin veil that masks the demon differences from the human sight. That veil, combined with our human ability to unsee anything that might unsettle us, has allowed the demon race to prosper and blend into the natural world.

That veil doesn’t work on me, and if Bettina’s assailant was human, the veil didn’t work on him either ...

You’d think by the time a guy had gained immortality, he’d tire of copying his butt on the office copy machine.

I was pulling out the third paper jam of the morning—and tossing fistfuls of copies of a weird combination of butt cheek and hoof—when Nina poked her head in, scanning the room, and asked, “Is she gone?”

I flopped backward and blew a few strands of my hair (done up in Clairol’s Red Hot) out of my eye. “Who?”

Nina shimmied into the copy room and straightened her vintage boat-necked Balenciaga dress. She had paired this little number with black-and-purple lace tights and those peekaboo booties that make me look like a poor lumberjack while it made supermodels (and vampires) look amazingly chic.

I guess living through two world wars and umpteen clothing revolutions would pique your fashion sense.

“What do you mean, who? Mrs. Henderson. This dress”—Nina did an elegant twirl—“is not only vintage, it’s irreplaceable. I wore it when I nabbed a bite of John Lennon.” Nina batted her lashes and grinned, her small fangs pressing against her red lips.

I cocked an eyebrow and Nina blew out an exasperated sigh.

Mrs. Henderson—the Underworld Detection Agency’s busybody dragon and all-around most obnoxious client—and Nina have a bit of a history together. It’s one that most often leaves Nina naked and hairless, with Mrs. Henderson hiccupping smoke rings and not-so-genuine apologies.

I looked down at my watch. “Oh my gosh, I’m totally late. Thanks for reminding me.”

I thrust the last of the hoof-and-butt Xeroxes into Nina’s hands and headed to my desk—hopping over the burnt-hole remains of a wizard, who had blown himself up, and looking away from Lorraine, UDA’s resident witch and finance whiz. She tried to stop me by waving in front of my face a folder full of invoices, but I was able to dodge her, thanks in part to the seminar that HR held on “Respecting Your Coworker’s Personal Space.”

I flopped into my ergonomically questionable chair and blew out a deep, comforting breath, then laced my fingers over Mrs. Henderson’s files. In addition to being a fire-breathing, St. John Knit–wearing dragon, Mrs. Henderson was a divorcée hell-bent on squeezing her cheating ex-husband for every last dime. As our agency detected all supernatural movement within our region, Mrs. Henderson dropped in monthly for updates and especially liked it when we were prepared for her with Mr. H’s paycheck stubs and warm, fuzzy stories about his current financial woes.

Henderson was nowhere to be found.

I buzzed the reception desk and Kale answered—I could hear the murmur of the iBud she kept continually tucked in her left ear. “Reception,” she said, “what can I do you for?”

I heard Kale muss some papers on the other end of the phone and then the snap of her gum. “No, nothing. Are you sure she was scheduled today?”

“That’s what I was thinking. I’ll try and ring her house.”

I rapped my fingers on my desk, suddenly impatient. “Yes?”

“Um,” Kale started to stutter and drift off, and I could almost see her biting her lower lip, curling the telephone cord around her finger.

“What about Vlad?” I asked.

Vlad was Nina’s nephew—and he was a current UDA employee, leader of the San Francisco chapter of the Vampire Empowerment and Restoration Movement (VERM for short, and for annoying Vlad incessantly), and a permanent fixture on Nina’s and my couch. He had the bright eyes, video game fetish, and disdain for folding clothes that most sixteen-year-olds had.

“Do you know if he is seeing anyone?”

Kale had been in love with Vlad since he first blew into the city—moody, restless, and dressed like Count Chocula. The Vampire Empowerment and Restoration Movement required that its adherents stick to the “classic” dress code of the fearsome vampires of yesteryear (more Bela Lugosi, less Edward Cullen) and also preached a staunch code against vampire/nonvampire mixing. That left Kale—a Gestalt witch of the green order—to pine relentlessly and call me on numerous occasions to ask about Vlad’s dating status.

She let out a loud whoosh of relief. “That’s what his Facebook status said. I just wanted to make sure. Bye, Sophie!”

The hangup sounded in my ear as I pulled up Mrs. Henderson’s phone number. I was in the middle of dialing when Nina stalked in, slamming the door behind her. “So what did the big lizard have to say today? She needs more money for crickets?”

I hung up the phone and rubbed my temples. “She’s a dragon, not a lizard, and she still hasn’t shown up. That’s not like her.”

Nina whipped out a nail file and gave her perfectly manicured nails the once-over. “Maybe she lit herself on fire. One can only hope. “She snorted, her smile lingering. “I want to go shopping. What do you think? Boutique in the Haight or mainstream on Market?”

I frowned. “I’m kind of worried about Mrs. Henderson.”

“So send her an edible arrangement. Don’t they have one with staked mice or something?

Anyway, boutique or mainstream? I need your financial prowess to point me in the right retail direction.”

I pulled out my calendar and flipped back a few pages. “Last week I had two missed appointments.”

Nina pouted. “Are you doubting your popularity at UDA now? You know everyone here adores you and we don’t even consider your ... issue.”

I felt a blush rise to my cheeks.

My “issue” was my breath. Not that it was bad (at least I don’t think it is); it is that I have some. The Underworld Detection Agency not only caters to the demon community—providing transfer papers, tracking paranormal activity in the city, detecting demon activity, and protecting from demonic or human threats—it is also staffed by demons.

Which is why there is currently a bologna and cheese sandwich wedged between two blood bags in the office fridge and why there is a constant CAUTION: WET FLOOR sign in front of the hobgoblin receiving line (hobgoblins are constantly slobbering demons and seem to have better traction than I do).

I rolled my eyes. “I know no one cares about me being human. I’ve been working here forever. It’s the appointments. No cancellations, no phone calls, nothing. I called the last two for follow-ups and couldn’t reach anyone.”

“Where do you think they’re going? It’s not like there is another company out there protecting demons.”

I crossed my arms in front of my chest. “Yes, Nina, I’m really worried that we’re losing business to Walmart.”

“Bring it up with Dixon.”

I gnawed my bottom lip. “I guess I could. We do have an all-staff meeting at four.”

Nina’s coal black eyes went wide. “I had totally forgotten about that.”

“Cuts into your shopping time?”

“No.” She clapped a hand to her forehead and started a rigorous massage. “Do you know how awkward that’s going to be? Me and him in the same room together after what happened!”

I leaned forward. “What happened?”

“Ohmigod, you and I live together, Soph! Have you not paid any attention? Me and Dixon?” she enunciated. “The whole dating thing? It totally didn’t end well.”

“Oh, right. That’s probably because it was all in your head. Nina, he’s our boss. It’s expected that he’d call you. And asking you to collate his copies means just that. The man needs staples.”

Nina narrowed her eyes. “Oh, and I suppose you’re going to tell me that him asking me to boot up his hard drive was completely innocent, too!”

Nina leaned over to gather her coat and enormously gaudy Betsey Johnson bag. “So you never told me. Shopping on Market or Haight?”

Nina raised an eyebrow and grinned salaciously. “Ain’t that the truth?”

I pursed my lips and straightened the already-straight selection of Post-it notes and general office tchotchkes on my desk. “Bite me.”

Nina dumped herself into my office chair again and lolled back. She kicked her Via Spiga booties up on my desk, crossing her ankles. “Hey, I’m not judging. If I had two hot otherworldly creatures ready to duke it out to save my afterlife”—and here she splayed a single pale hand against her chest—“I’d do my damndest to keep them both around, too.”

She swung out the nail file again. “So about that shopping trip ...”

I gathered a few files from my cabinet. “Give me a half hour and I promise to be your couture mule all the way through San Francisco. Deal?”

I poked my head into the outer office, where I used to sit (back in the Pete Sampson–werewolf-boss days), and mustered up my most harmless human smile for the vampire sitting at the front desk. He was heavily interested in whatever Cosmo had to say, but I saw his nostril twitch. When I sucked in a breath, he stiffened.

I am pretty well used to living a vampire-filled life, but having coworkers who could smell me at fifty paces is still a little unnerving.

Lunar Park by Bret Easton Ellis
Mercenary Instinct (a science fiction romance) by Ruby Lionsdrake
All I Can't Resist by Kels Barnholdt
Just This Once by K.G. MacGregor
Erotica Fantastica by Saskia Walker
Square Snapper (Detective Inspector Burgess) by Middleton, Deborah
Beyond Death by Deb McEwan
Marna by Norah Hess
Ruby by Cynthia Bond
The Story of My Heart by Felices, Margarita