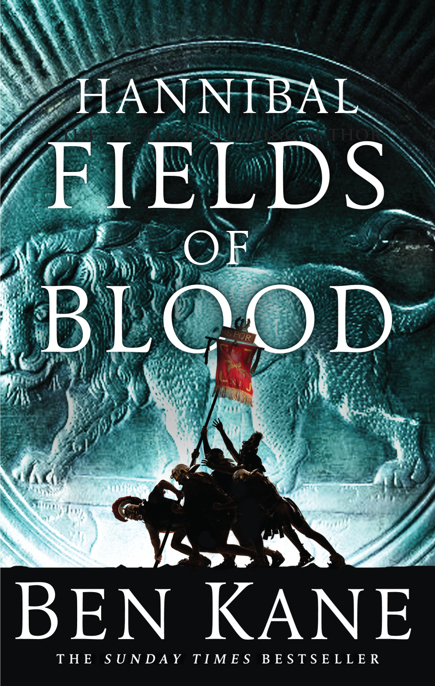 Hannibal’s campaign to defeat Rome continues as he marches south to confront his enemy.

With him is a young soldier, Hanno. Like his general, Hanno burns to vanquish Rome. Never has the possibility seemed so likely.

But a stealthy game of cat and mouse is being played as Rome’s generals seek to avoid confrontation.

Eventually the two armies meet under a fierce summer sun. The place Cannae – the fields of blood.

The battle will go down in history as one of the bloodiest ever fought, a battle in which Hanno knows he must fight as never before – just to stay alive.

Ben Kane was born in Kenya and raised there and in Ireland. He qualified as a veterinary surgeon at University College Dublin, and worked in Ireland and the UK for several years. After that he travelled extensively, indulging his passion for seeing the world and learning more about ancient history, having been fascinated since childhood by Rome and its armies. Seven continents and more than 65 countries later, he decided to settle down, for a while at least. While working in Northumberland in 2001-2002, his love of ancient history was further fuelled by visits to Hadrian’s Wall. He naively decided to write bestselling Roman novels, a plan which came to fruition after several years of combining writing with his job as a vet. He now lives in North Somerset with his wife and family, where he has now given up veterinary medicine to write full time.

To find out more about Ben and his books, visit:
www.benkane.net
.

For Arthur, Carol, Joey, Killian and Tom: veterinary classmates
half a lifetime ago, and good friends still 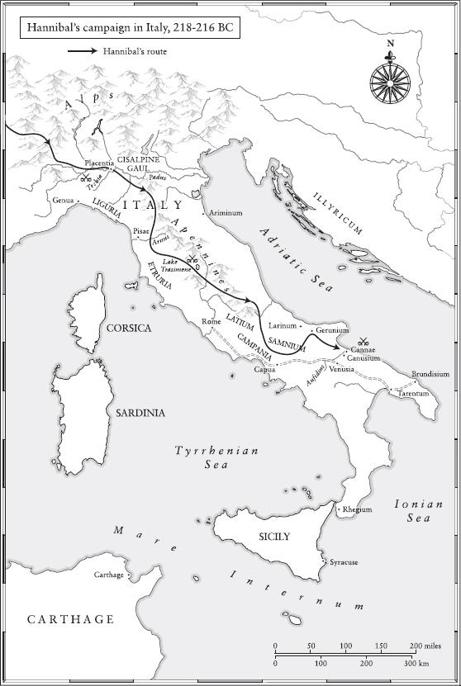 FOR THE MOST
part, the ground was flat, agricultural land that supplied grain for the nearby town. Green shoots of wheat a handsbreadth high were the only flash of colour in the frozen fields. Everything else had been turned silver-white by a heavy frost. The lowering clouds provided little contrast. Nor did the walls of Victumulae, which reared up, grey and imposing, in the distance. By the side of the road that ran to the gates lay a small, unremarkable copse.

Standing in the trees was a tall, rangy figure in a wool cloak. He had a thin face with a crooked nose and startlingly green eyes. Black curls escaped from the felt liner covering his head. His gaze darted restlessly over the terrain, but he saw nothing. It had been the same since he’d sent the sentry off to get some food. Hanno hadn’t been watching for long, but already his feet were numb. He mouthed a curse. The cold wasn’t going to go away. The ice was showing no signs of melting; nor had it for several days. A pang of homesickness. It was a different world from his childhood home on the north African coast, which he hadn’t seen for almost two years. He could still picture the massive sandstone walls of Carthage, painted with whitewash so that the sunlight bounced off them. The magnificent Agora and, beyond it, the elaborate twin harbours. He sighed. Even in winter, his city was quite warm. And the sun shone most days, whereas here the only sign he had seen of it for a week was an occasional glimpse of a pale yellow disc through gaps in the murk overhead.

Peee-ay.
Peee-ay.
The characteristic cry made Hanno’s head lift. Against the dull grey-white of the cloud, a couple of jackdaws jinked and turned, pursuing a hungry, and angry, buzzard. The familiar sight – the small birds harassing the larger one – felt ironic. Our task is far harder than theirs, he thought grimly. To learn that Carthage is its master, Rome has to bleed as it never has before. Once, Hanno would have doubted that could ever happen. His people had been decisively beaten by the Republic before in a bitter, drawn-out war that had ended a generation previously. The conflict had left a hatred of Rome in every Carthaginian’s heart, but there had seemed no way of winning redress from the enemy. In the last month, however, the world had been turned on its head.

Only a madman would have believed that an army could be led hundreds of miles from Iberia to Cisalpine Gaul, crossing the Alps as winter began. Yet, driven by his desire to defeat Rome, Hannibal Barca had done just that. Strengthened by an alliance with local tribes, Hanno’s general had smashed the large Roman force that had been sent to meet him. As a result, the whole of northern Italy lay open to attack, and against all probability Hanno, who had been enslaved near Capua, had escaped to join Hannibal. In doing so, he had been reunited with his father and brothers, who had thought him long since dead.

Hanno’s belly rumbled, reminding him of his mission to find food and gather intelligence. He wasn’t here to watch the local fauna or to ponder the future. His phalanx of Libyan spearmen, hidden to his rear where the undergrowth afforded better concealment, needed supplies as much as he did. He had another purpose too. His eyes traced the line of the empty, muddy track that ran past his hiding place, arrowing through the fragile young wheat, straight to the town’s front gate. There were fresh holes in the nearest icy puddles, evidence that some time that morning, a horse had been ridden hard towards the town. The sentry had told him about it. Hanno felt sure that it would have been a messenger carrying word to Victumulae of the Carthaginian army’s approach.

A thin smile traced his lips at the thought of the alarm that would have caused.

Since Hannibal’s stunning victory at the River Trebia, every Roman for a hundred miles had been living in fear of his life. Farms, villages and even smaller towns had been abandoned; terrified citizens had fled to anywhere that had thick walls and a garrison to defend them. The widespread panic had worked to the Carthaginians’ advantage. Exhausted first by their harrowing crossing of the Alps and then by the savage battle with a double consular army, they had badly needed to rest and recuperate. Even so, hundreds of men – injured and whole – had died in the harsh weather that had followed the fighting. All but seven of the thirty-odd elephants had succumbed too. Ever the canny general, Hannibal had ordered his weakened forces to stay put. All non-essential military duties had ceased for a week. The deserted homesteads and farms had been a blessing, needing nothing more than men with accompanying mules to empty them of food and supplies.

These provisions soon ran out, however. So too did the foodstuffs offered by their new Gaulish allies. Thirty thousand men consumed a vast amount of grain daily, which was why the Carthaginians had broken camp the week before. At that very moment, they were marching on Victumulae. Word had it that the wheat stored behind its walls would feed them for weeks. Hanno’s patrol was one of a number that had been sent out to reconnoitre the terrain in advance. He only had to return if he found evidence of an enemy ambush; otherwise, he could wait in the vicinity until the main force reached the town, which would be in the next day or two.

To his satisfaction, the countryside had been bare of nearly all human life. Apart from one clash with the enemy, from which they had emerged victorious, and a night spent in a friendly Gaulish village, it had been like travelling through a land inhabited by ghosts. Hannibal’s cavalry, which was ranging far ahead of the infantry units, had brought more interesting news. Most of the survivors of the recent battle were holed up in Placentia, which lay some fifty miles to the southeast. Others had fled south, beyond the Carthaginians’ reach, while an unknown number had sought refuge in places such as Victumulae. Despite the inevitability that the town would fall to Hannibal’s superior forces, Hanno had taken the risk of moving closer to it than any of the cavalry units. He wanted to discover how many defenders they would face when the attack came, perhaps even strike a blow at an enemy patrol. Thus armed, he might be able to win his general’s favour again.

It was unfortunate how things currently stood, he brooded. Ever since Hannibal had assembled a vast army and used it to take Saguntum, reopening hostilities with Rome, Hanno had longed for nothing more than to join the general in his struggle. What hot-blooded Carthaginian wouldn’t have wanted to take revenge upon Rome for what it had done to their people? After being reunited with his family, things had started well. Hannibal had honoured Hanno with the command of a phalanx. Yet it had all gone wrong soon after that. Hanno’s pulse quickened as he remembered recounting to Hannibal what he had done during an ambush on a Roman patrol a few days before the battle at the Trebia. Hannibal’s fury at the news had been terrifying. Hanno had come within a whisker of being crucified. So too had Bostar and Sapho, his brothers, for not intervening. Since then, his general’s disapproval would have been patent to a blind man.

In that ambush he had let two Roman cavalrymen – Quintus, his former friend, and Fabricius, Quintus’ father – go free. Perhaps it had been foolish, Hanno mused. If he had just killed them and had done, life would have been far simpler. Instead, in an effort to wash away the stain on his good name, he had volunteered for every subsequent patrol, every dangerous duty going. So far, none of it had made the slightest difference. Hannibal had given no sign that he’d even noticed. Full of resentment, Hanno wriggled his toes inside his leather boots, trying to restore some sensation to them. His effort failed, irritating him further. Here he was, freezing not just his extremities but his balls off, on a mission that was doomed to failure. What chance had he of determining the enemy’s strength in Victumulae? Of ambushing an enemy unit? With Hannibal’s army closing in, the chances that any legionaries would be sent beyond the town’s walls were slim to none.

Hanno checked his disgruntlement. He’d had good reason for acting as he had. Despite the fact that he was the son of Hanno’s owner, Quintus had become a friend. It would have been wrong to have slain him, not least because he had owed Quintus his life twice over. A debt is a debt, Hanno thought. When the time is right, it has to be repaid, whatever the risk of punishment. He had survived Hannibal’s subsequent wrath, and then the battle, had he not? That in itself was proof that he had done the right thing – that for the moment he held the gods’ goodwill. Afterwards, Hanno had been careful to make generous sacrifices to Tanit, Melqart, Baal Saphon and Baal Hammon, the most important Carthaginian deities, thanking them for their protection. His chin lifted. With luck, he held their favour still. Something might yet come of his plan to gather intelligence.