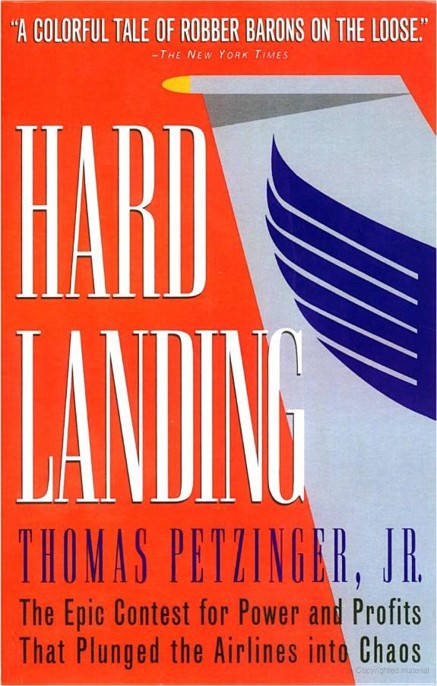 “Vivid and detailed.… Unlike many dry analyses of deregulation, this book is foremost a tale, fashioned around the ambitions, schemes, and failures of the mercurial men who have dominated aviation for the last 30 years.”

“Petzinger tells his story with the clarity and attention to detail that makes
The Wall Street Journal
, for which he writes, so readable and entertaining.… There is much here that, in this reporter’s memory, the public didn’t know.…
Hard Landing
is recommended reading for those whose profession requires an understanding of the airline business—or for anyone interested in how big business really works when the TV lights are off and the boardroom door is closed.”

“None tell it better than
Wall Street Journal
columnist Thomas Petzinger, Jr. In his well-written tome that is organized and reads much like an intriguing novel, Petzinger shows how the airline industry painfully changed over the last 25 years.”

“This is an impressive and wonderfully readable book … the best picture to date of the dramatic changes in U.S. civil aviation over the last two decades. Much of it reads like a novel-only it is all true.… The overall effect is enthralling.… Read this one!”

“Petzinger’s reporting shines. The book is filled with the reconstructed conversations of the men who led America’s airlines through the last three decades. Its sweep is breathtaking.”

“Petzinger focuses on the people in the epic contest. And that’s what makes the book so fun, and elevates
Hard Landing
above the typical aviation or business book.”

“A wonderful book that explains why the airline business is such a crazy industry.”

“This riveting book is replete with little-known facts.… An important book [that] reads like a novel and leaves the reader eager for his next.”

“Fascinating insights from a journalist who obviously well researched the topic.”

“What makes this frank, matter-of-fact volume engaging is its detailed analysis of the politics and big-business duplicity behind those flashy ads.”

“Colorfully chronicles the changing alliances and enmities of these men as they battle to win at any cost and change the way the world travels.”

“In this comprehensive exploration of the industry, Petzinger focuses on the brilliant but sometimes seriously flawed leaders who have revolutionized the business of moving people in flying cylinders.… Intriguing.”

Oil and Honor: The Texaco-Pennzoil Wars

THREE RIVERS PRESS is a registered trademark and the Three Rivers Press colophon is a trademark of Random House, Inc.

To Paulette
And to Beatrice, Eva, and Janis

It was a love of the air and sky and flying, the lure of adventure, the appreciation of beauty. It lay beyond the descriptive words of men—where immortality is touched through danger, where life meets death on an equal plane; where man is more than man
.

This is a nasty, rotten business
.

I grew up around the airlines. As a teenager I handled baggage and freight for United Airlines. My late grandmother, Beatrice V. March, founded a travel agency in Ohio 40 years ago. My father, Thomas V. Petzinger, Sr., built it into a business well known for integrity and innovation. My brother, Charles C. Petzinger, is now building the business into a world-class operation. Over the years my mother, Jean March Petzinger, and my sister, Elizabeth Ann Holter, involved themselves in the agency whenever it required class.

My first thanks thus go to my relatives for exposing me to the delights of the travel profession. Only now, after researching this book, do I appreciate how hard they have had to work to extract a living from it.

I owe a tremendous debt to my sources, who are listed elsewhere. In addition to thanking them for their time, trust, and candor, I wish to extend my regrets to each and every one of them that this is not precisely the book any of them might have wished me to write.

At
The Wall Street Journal
, I thank Paul Steiger, the managing editor, who kept a job open for me while I disappeared to work on this project. News editor Cynthia Crossen helped assure a soft landing on my return. For their encouragement, moral support, and reporting assistance along the way, I thank my
Journal
colleagues Jill
Abramson, Laurie Cohen, Brian Coleman, Al Hunt, Bruce Ingersoll, Hal Lancaster, Laurie McGinley, Walt Mossberg, Alan Murray, Asra Nomani, Rick Wartzman, and David Wessel, as well as my former colleagues Eugene Carlson, Jim Stewart, and Peter Truell. I especially wish to thank the
Journal’s
Bridget O’Brian, who not only shared her insights but provided years of outstanding coverage on which this manuscript heavily relies.

Anyone who writes a book about commercial aviation owes an incalculable debt to Robert Daley, R.E.G. Davies, Robert Serling, and Carl Solberg, who have written outstanding histories. Two other authors—Dan Reed, who has written a biography of Robert Crandall, and Capt. John J. Nance, who wrote an account of Braniff’s failure—generously shared insights with me.

I cannot mention everyone in the airline industry who provided help, but I would like to single out a few: at American Airlines, Al Becker, Iain Burns, Lizanne Peppard, and the infinitely patient and helpful John Hotard; at British Airways, Sandy Gardner, Peter Jones, John Lampi, Derek Ross, and David Snelling; at Southwest Airlines, Helen Bordelon, Ginger Hardage, Kristie Kerr, and Ed Stewart; at the Air Line Pilots Association, John Mazor and Kathy White; at United Airlines, Millie Borkowski and Jan Johnson. Thanks also to one of the greatest knowledge resources in the airline industry, Marion Mistrik, chief librarian at the Air Transport Association in Washington, D.C.

A number of my friends and associates read all or part of the manuscript and provided valuable comments; my thanks to Bob Cross, Katherine Field, Stephen Holter, Joe Meier, Bridget O’Brian, Carolyn Phillips, and Babak Varzandeh. Dick Tofel found bloopers that no one else would have caught. The toughest copy editor I know—my mother, Jean Petzinger—read every word a couple of times and improved more of them than I can count.

I have been blessed with intelligent and dedicated researchers. Cortney Murdoch rounded up records across the country. Babak Varzandeh endured the frustrations of the SEC. John Whittier joined me for countless hours over photocopiers. Jennifer Reingold, Colin Cowles, and Cass DuRant helped me accumulate a massive library of clippings.