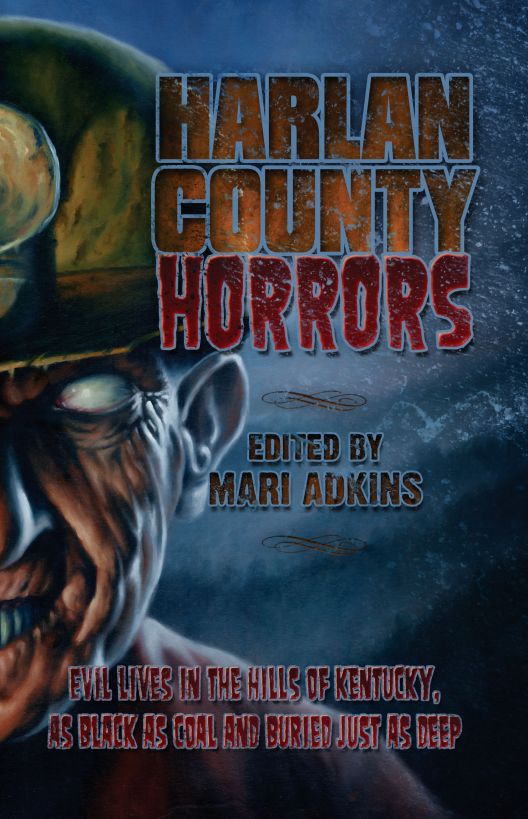 This
collection is a work of fiction. All the characters and events
portrayed in these stories are either fictitious or are used
fictitiously.

All
rights reserved, including the right to reproduce the book, or
portions thereof, in any form.

“
The Power of
Moonlight”
by
Debbie Kuhn

“
Hiding Mountain: Our Future in
Apples”
by
Earl P. Dean

“
Trouble Among the
Yearlings”
by
Maurice Broaddus

“
The Thing at the Side of the
Road”
by
Ronald Kelly

“
The Witch of Black
Mountain”
by
Alethea Kontis

A
History of Harlan, KY
by
Preston Halcomb

When I close my eyes and think of Harlan County, the first
images to appear behind my eyelids are of Martin’s Fork Lake, the
view from Raven Rock at Kingdom Come, the night sky at Camp
Blanton, and the gazebo at Resthaven. Savage beauty draped in a
cloak of savage darkness is the epitome of Harlan County. Ugliness,
wastefulness, and scars caused by deep, strip, and mountaintop
removal mining—and other things—have altered the lush, verdant
landscape. The very beauty and abundant game that enticed the
pioneers to remain there and evolve into rugged mountaineers would
become their downfall.

In
the beginning, a pioneer could claim for his own any scrap of land
on any hillside or creek bottom. With the abundance of wild game,
he didn't have to bother with sowing large crops; small “kitchen
door” gardens for needed vegetables and herbs sufficed. The early
mountaineer and his family lived a solitary existence, rarely
seeing anyone outside their farmstead, as they had no
need.

Things began to change once the timber barons came into the
Cumberland Plateau in the mid- to late-1800s and saw the vast
stands of enormous hardwood trees. Once these were depleted—leaving
the landowners with little cash in return, for they had been
convinced to sell the timber rights without any claim to the actual
land—the area became ripe for the removal of the black gold buried
beneath the mountains and hillsides. With water supplies oftentimes
buried or otherwise left useless from logging operations, the
mountaineer found himself with no choice but to sell his land for
what little he could receive for it and move his family into any
one of the number of growing, thriving company owned and operated
mining towns.

In
the mid- to late-1960s things began to change somewhat, as new
roads into the plateau brought in a handful of new jobs and
opportunities. But unless brought on by outside forces, change has
always been slow to come in the Kentucky mountains.

At
the brink of my own change and awakening within Harlan County, I
moved to Loyall in October 1995. I can’t, in all honesty, make any
sweeping proclamations about love at first sight, but I can say the
county grew on me, tugged at some deep, hidden place within my
soul. And I came to call that place “home.” I know I sit and talk
about Harlan County enough to make peoples’ ears bleed, and my
running joke is that I know more about Harlan County and love it
more than some of its native people. In fact, I’m prone to—and
known for—packing friends into my car to make the long drive down
so I can share the county with them.

This love brought about the birth of the book you now hold in
your hands. I can’t quite remember what we said in the Spring of
2007, but one day while I waxed on about Harlan, Jason
Sizemore—esteemed High Overlord of Apex Publications—said, “We
should do a special Harlan County anthology. Fill it with regional
stories by regional writers.” I thought it would be fun. So we went
to work, but due to the fickleness of the publishing industry, we
had to cancel our plans. Admittedly, when the idea first came
about, Jason and I thought we were just joking around. But then a
miracle happened in the spring of 2008. We got serious and said,
“We can do this.” Then he looked at me and said, “You can do this.”
So I did this. I reassembled writers, sent out announcements, and
we all went to work.

The
Harlan County backdrop described above—the futility of the
mountaineer—is difficult to understand or imagine unless it’s
witnessed or experienced. One only need to step into the county to
feel the hopelessness some of these people still live with every
day, the darkness enshrouding their lives. With this in mind, I
told the writers, “Go forth and create an image of Harlan
County.”

From the time the first stories began coming in, I knew
Harlan County
Horrors
was going
to be something special. Aliens, witches, vampires, portals to
hell, zombies, djin, Aztec priests, chupacabra, zombies, and more
dance a magical, oppressive, often violent reel through coal, ash,
and blood.

It
is my sincere hope that you derive as much pleasure from
Harlan County
Horrors
as I did
in putting it together. It is my gift of love to the county and to
its people.

“
The Power of Moonlight
”

Debbie Kuhn is the non-fiction editor for
Doorways Magazine
. She loves to read and write genre
fiction, especially horror stories that involve a nasty ghost or
two. Debbie has a habit of roaming around old southern cemeteries
after dark. If you happen to run into her at midnight when the moon
is full, don’t forget to play dead. Curious folk might find it
safer just to visit her web site, debbiekuhn.com. She currently
lives in Louisville, KY.

B
obby Lee Blackburn got killed exactly three
weeks before he was to marry his childhood sweetheart at the New
Hope Baptist Church. He died just the way he feared he would—deep
underground, alone in the dark, his body entombed
forever.

Priscilla Stevens had decided to worship Bobby Lee when they
were seven years old. On the day she fell in love, he’d been
chasing her around Old Man Griffey’s fish pond and she’d tripped
and fallen in. Bobby Lee had grabbed hold of her long,
strawberry-blonde ponytail and had yanked her out of the water
before she could drown.

That boy would always be her hero, even after he broke her
heart.

The
first time he left her was when they were twelve. His daddy found a
better job over in Virginia, and he and his parents moved away from
Harlan County. Pris had cried herself to sleep every night for two
weeks, keeping her Granny Maeve awake.

About a month after Bobby Lee went away, the old lady woke
Pris late one night and told her they’d be taking a walk up the
winding mountain trail behind their farmhouse. The two of them
sneaked down the back staircase and left without waking Pris’
mother.

The
full October moon revealed the goldenrod in bloom, and the air
smelled crisp and clean and dry. Granny Maeve’s knees cracked and
popped a little during the climb, but otherwise no sound could be
heard except for a light wind rustling through the trees. Nestled
in the narrow valley below, the coal town of Russell Fork had
fallen silent, with only a few lights left twinkling to give away
its presence.

They kept going until they reached a rocky plateau, barren
except for a lone sycamore tree. Granny Maeve found a large flat
stone to sit on and motioned for Priscilla to join her.

“
This spot will do. We can see the Blood Moon and it can see
us.”

Pris wondered why it was called a Blood Moon when it wasn’t
even red, but she stayed quiet and watched as her grandma fished
around in the pockets of her grey wool sweater. The old woman
pulled out a small vial of what she called her “sacred” oil, and
then a photograph. The picture had been taken at Pris’ birthday
party in January. Her mother, Dorie, had snapped a photo of Pris
and Bobby Lee sitting next to each other at the kitchen table. Pris
was leaning forward, getting ready to blow out the candles on her
chocolate cake.

“
An only child and an only child,” Granny Maeve muttered. She
smeared a dab of oil onto the picture and handed it to Priscilla.
“You want your friend to come home again, don’t you?”

Pris stared at her grandmother, and nodded.

“
Well, you can use the power of moonlight just like your
granny can. Most folks around here don’t believe in such things,
and them that do don’t think it’s right to use the gift, so you
best keep quiet about what we’re up to—don’t you even tell your
mama.”

“
All right, then. For this spell to work, the moonlight’s
power has to be mixed with the truth, girl, and the truth is in
your tears. You have to cry for Bobby Lee if you want him back—show
your love and your need for him—and let your tears fall like rain
on that picture so he knows how you feel.”

Pris held the photograph up close to her face. Moonlight
reflected off the shiny oiled surface. Bobby Lee’s perfect dark
eyes smiled up at her. She missed him so much her body ached with
the pain.

Granny Maeve patted her gently on the back as she sobbed.
“That’s good, my darlin’. Now talk to him, out loud, and tell him
what you want.”