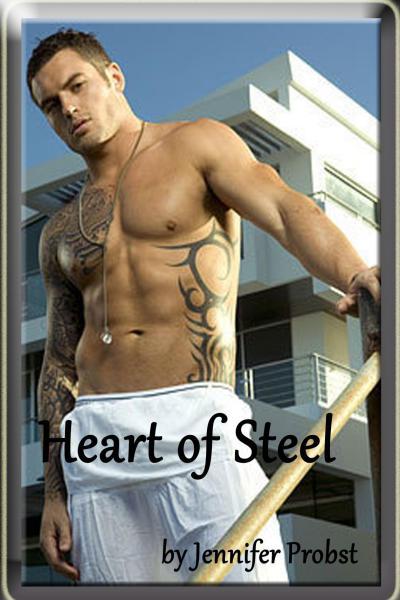 Heart of Steel
by
Jennifer Probst

Email us at
[email protected]

Visit our web site at
www.book-hub.com

All rights reserved. No part of this book may be reproduced or transmitted in any form or by any means, electronic or mechanical, including photocopying, recording, or by any information storage and retrieval system, except for excerpts used for reviews, without permission in writing from the publisher.

all the good friends

who have helped me on my journey:

Without their friendship and support,

this would never be possible

Special thanks to the members in my writers group,

The Hudson Valley RWA, who never failed to

inspire me and tell the truth.

And finally, to my two boys,

You all make the world a more beautiful place.

Many writers don't get the opportunity to publish their first book, let alone the chance to publish it twice. Heart of Steel was the very first novel I ever penned. It went through many editors, who believed my alpha hero was "problematic" before hitting the desk of LionHearted. My first editor, MaryAnn, believed in this story enough to publish it. We eventually lost her in this world, and the company decided to close. When I received my rights back to the story, I knew I wanted to revise and freshen it up a bit. I now have the opportunity to re-issue the book in e-format with Book Hub. Chandler and Logan will now have another chance to reach my readership.

Writers grow and change with experience, but I didn't want to alter my original, much younger voice. The revisions made are more surface - a bit more technology is now incorporated for my powerful CEO. A few tweaks. The rest remains the same.

I believe Heart of Steel is still a keeper; a true love story about change, redemption and the power of love.

I hope you all enjoy my very first novel - ready for the digital age.

Chandler Santell studied the man behind the sprawling mahogany desk and wondered if she’d lost her mind. She took a deep breath and tried not to fidget, but her expensive celadon wool business suit was beginning to itch.

How could she make a business deal with one of the most powerful men in the finance industry? Every firm she had contacted in New York City had rejected her proposal. Desperate, and almost out of time to save her Yoga and Arts Center, she decided to take a shot on one last name.

She knew why he was the “man of steel.”

Chandler ran down his list of attributes: owner of L&G Brokerage—one of the most successful companies in the city; dubbed the “man of steel” by the business community due to his ruthless reputation in closing a deal; a man whose word was law—and whose name commanded respect. His hard, steely presence in a room made people step out of his way. One word from the man’s lips caused companies to double their profits or go bankrupt from loss of investors.

He read her business proposal without looking up. She studied the strands of dark sable hair cut slightly longer than fashionable. A hint of silver at his temples helped Chandler place him in his mid-thirties. His features were too bold to be called typically handsome, but he had an interesting face. A tanned, almost olive complexion set off hard cheekbones and a strong jaw. Dark eyebrows lowered in a frown as he flipped through the pages of her proposal. His mouth tightened into a thin line, but his lower lip hinted at a devastating smile that could change his whole demeanor. Unfortunately, Chandler bet the man didn’t smile too often.

He wore a dark charcoal gray suit, and though conservatively cut, the quality of the fabric and elegant lines told her his clothes were custom made. When he had stood to welcome her, he towered easily over six feet and radiated a tightly contained raw energy. Even as he studied the figures in front of him, his presence pressed down upon her in a purely masculine intimidating manner. Another advantage the man held when closing a business deal.

Chandler pulled discreetly at the itchy neckline of her suit and wished she was back in her studio, conducting a class in her own comfortable clothes. Four years ago, she’d walked away from the corporate world and vowed to never return. The irony of the situation hit her full force. The Fates certainly possessed a sense of humor. She was now about to use all the skills she acquired from her past to convince Logan Grant to help save the Yoga and Arts Center, the school she built from scratch.

She hoped the Fates were also kind.

Logan dropped the proposal back on the polished wood and looked up. His gray gaze, as clear as ice but with a smoky intenseness, made her stare helplessly back, as if she had no choice. A shiver rose up her spine. She knew immediately he was not a kind man. Chandler fought against the sudden urge to walk out of his office and hide in a safe place.

An inner voice mocked her thought. If Logan Grant wanted to find her, there would be no safe place. She took another deep breath and braced herself for his decision.

“You are one gutsy lady.”

She blinked. “Excuse me?”

He leaned back in his chair and surveyed her. The leather creaked gently beneath his weight. “I’ve seen many projects looking for funding, but never one with so many—how should I put it? Good intentions. I’ve heard of financing a health club, but a class that helps my employees manage stress? The results are impossible to measure. How do I make a profit?”

Chandler leaned forward and resisted the urge to pull down the hem of her tight skirt. Her legs itched from the scratchy material, but she wasn’t about to drawn his attention there. “Your investment will come back to you time and time again, Mr. Grant.

As you’ve just read in my research, employees today aren’t working to their full potential. L&G Brokerage, like many firms, suffers from high turnover. An employee hired by your firm shows productive results for an average of two years. Then the employee exhibits signs of burnout, and your firm hires a batch of fresh blood. Teach an employee to deal with stress, and he or she will keep productivity steady over the years. This saves you from hiring and retraining a new work force.”

He studied her in silence. Chandler felt his piercing gaze try to strip away the cool, professional image she presented. She hoped he never saw her desperation, or she would fail. A man in his position respected strength, and she guessed he’d expected a mild mannered yoga teacher with no developed business plan. She’d spent weeks begging his secretary to schedule this meeting. Chandler knew she’d have one shot to sell her proposal.

She reached up unconsciously to push back her long hair, then realized the strands were confined in a tight bun. “Mr. Grant, if you’d let me—”

“Logan, if you’d let me give you a brief rundown of my plan, I’m sure you’ll see the benefits.”

A soft knock on the door made her pause. A tall man with light brown hair entered the room and stopped beside her chair.

“Chandler, this is Richard Thorne, one of my attorneys. I asked him to sit in on this meeting, if you don’t mind.”

She forced a smile and stood. Offering up a quick prayer that her palms weren’t damp, she reached out and shook the attorney’s hand. Somehow, the idea of a lawyer listening to her proposal drove home the fact she was dealing with major league players. She fought back a nervous giggle when she remembered she’d never even scored in the minor leagues. “Nice to meet you,” she said.

The attorney’s hand held hers for a moment longer, and he smiled as if he knew her thoughts. Chestnut colored eyes showed a teasing glint. “Don’t let my being an attorney intimidate you,” he said, with a wink. “I’m really harmless.”

She laughed. His lean, angular face seemed kinder than Logan’s and his smile came quick and easy. He took a chair near the window and settled a legal pad on his lap.

Chandler managed to give one leg a quick scratch, and her skirt a discreet tug as she sat back down. She re-focused her attention back to Logan.

“You’ve made some good points but still didn’t answer my question.” Logan handed the proposal to his attorney, then tapped his gold pen against the arm of his leather chair. “Why funnel money into a program that can’t guarantee a profit?”