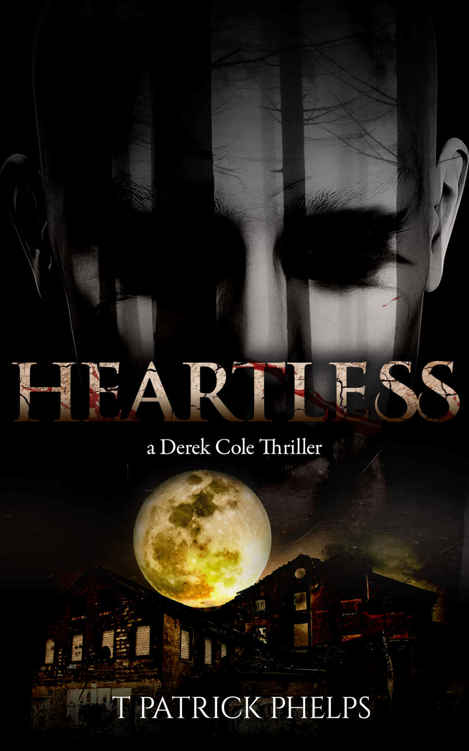 “I didn’t know where else to turn.”

Derek Cole hated hearing those words. In his line of work, he came to expect that his clients would feel this way, but each time he heard a client tell him that the only reason they contacted him was out of desperation, he cringed at being their last option.

“No one else would ever believe me,” his client said as he sat on the damp park bench beside Derek.

Derek preferred to meet his clients in parks in whichever city they happen to be. This city was Chicago and the park was Grant Park. He liked being outside and preferred meeting with clients in places that, if things took a wrong turn, he could have both quick access to an exit and enough people around to discourage ill-tempered clients from making a scene.

While Derek stood exactly six feet tall and weighed a solid 190, his light brown hair, clean-shaven face, and power blue eyes did not give him the intimidating looks that others in his line of work enjoyed. He had found himself in “challenging” circumstances with past clients when he used to meet with them in whatever hotel Derek was staying. He decided after one client gave him a broken nose and a slight concussion that outdoor client meetings in public places were better choices.

After receiving a call from this new client yesterday and after confirming that the “down payment” was safely deposited in his account, Derek purchased a one-way ticket from his hometown airport to Chicago’s O’Hare. Though Derek had visited the windy city a few times during his years working as a “freelance detective,” he hadn’t spent enough time in Chicago to learn his way around. What Derek did know was that Grant Park, like most every public park in America, would not offer any degree of suspicious privacy.

“You understand that you are paying my accrued fees whether or not I can help you, correct?” Derek said.

“Of course. Money is not an issue,” his client responded.

Derek liked it when money wasn’t an issue. He liked when clients understood that his services were expensive and didn’t barter over the final tab.

“You’ve been on the clock for the past sixteen hours.”

“Good,” Derek said as he pulled out a moleskin notepad and fine point black pen. The moleskin notebook was a gift from his last client, given to Derek to replace his reliance on scraps of paper, napkins, and Egg McMuffin wrappers to serve as his notebook. “Please don’t vomit your whole story on me. Let me guide you through what I need to know. If I ask for details, then and only then do I want you to give me details. If I say ‘vomit,’ then feel free to tell me everything you know, including your opinions. Make sense?”

“Start with your full name and how it was that you learned of my services.”

“My name is Thomas O’Connell. I prefer to be called ‘Thomas.’ My uncle, Roger O’Connell hired you last year. Says that you’re the best man for the job.”

“Roger O’Connell is your uncle?” Derek said. “The lawyer outside of Chicago? Good guy. Paid without an argument, and I was able to solve his problem in just two or three days, if I remember correctly.”

“He said it took you four days, but he was happy with the results.”

Derek absently began tracing the three-inch scar on his left cheek, not reminding himself of its cause but, for a moment, of the person for whom the scar was created.

He brought his hand back to his lap and flipped through several scribbled pages of his moleskin before resuming the conversation.

“Okay, Thomas. Tell me in fifty words or less why you contacted me and what you need taken care of.”

Thomas breathed deeply, collecting his thoughts. To Derek, it seemed that Thomas was rehearsing his story in his mind to make sure it would come in under the fifty-word limit.

After a long pause, Thomas looked out over Lake Michigan that bordered Grant Park and began speaking.

“My twin brother, Alexander, has already killed at least three people. I have reason to believe that he is planning on killing more people, including my parents. And maybe me as well.”

“He killed three people, and you think coming to me is a better option than going to the police?” Derek asked.

“The police are already involved. But there are other circumstances.”

“There always are. What are yours?”

“I may have to give some details for you to understand.”

Derek sighed. To him, details were things often offered yet seldom needed. He believed that part of his job was to uncover the details as he proceeded though his tasks. One detail leads to another.

“Give me your reasoning behind your need to give me a history lesson.”

“My brother was born without a heart and with only half of a lung,” Thomas said as quickly as he could. “He isn’t really alive, or at least he shouldn’t be.”

Derek had been hired to assist in many cases; some “run of the mill” and some that were downright odd. He learned that clients often exaggerated to give more credence to their side of the story in case Derek ever heard the other side.

As he sat in his living room reading a novel by Graham Greene, Alexander heard the familiar sound of the hallway door opening. A check of the clock told him that he had been reading for nearly 20 straight hours. A few seconds after hearing the noise, the familiar voice of Doctor Jacob Curtis sounded through the intercom.

“Alexander, it’s Doctor Curtis and Doctor Peter Adams. Please go into your bedroom and fasten the hook to the door.

Alexander gently placed the novel onto the coffee table and entered his bedroom. He attached the metal hook to the thick, steel door. Seconds later, the loud, ratcheting sound of the winch was heard from the hallway outside of his living room. Within a few seconds, the rope tightened, and its pull sealed his bedroom door closed.

The two doctors entered the room, both wearing smiles.

“Alexander,” Jacob Curtis said, “you may just end up saving thousands of lives.”

“Tell me how,” Alexander whispered. The door separating the living room, or “reading room” as Alexander preferred to have it called, was custom built, designed, and installed. Knowing the force that the ratchet and pulley system would demand, the contractor had used two-inch thick, heavy gage, solid steel in the construction of the door. In order to afford line of sight into and out of the bedroom area, the contractor had installed a three foot by three foot glass window pane, reinforced with crisscrossing steel mesh. Anchors were used on both sides of the door to give the framing the strength needed to withstand the draw of the pulley as well. The intercom system, which was always in the “on” position, had both microphones and speakers positioned in both the reading and bedrooms.

“Something wrong, Alex?” Jacob Curtis asked. Though he was too excited to be overly concerned about Alexander, the idea of asking seemed right. “You sound as if you are weakening.”

“A little tired is all.

Sleep will be coming soon, I fear,” Alexander answered with an even quieter voice.

“Well then, we will make this brief.”

“I certainly would not want to fall asleep while you are giving me this wonderful news,” Alexander said in a thin, whisper of a voice.

It was too late when the doctors noticed. The hook drilled into and through the steel part of the bedroom door was held in place by a locking nut on the bedroom side of the door. As the doctors looked down at Alexander’s hands, they saw the reason he was whispering. The locking nut had been removed and the only thing holding back the force of the pulley system was the grip of Alexander Black.

The doctors knew all too well that Alexander was dangerous and that letting their guard down when around Alexander could find them in a potentially dire situation. They were trained to look for signs that their patient was planning something: signs that may indicate that something was out of place. Anything suggesting that Alexander was scheming something. Alexander knew that the doctors would have suspected something when he could only speak through whispers, but he also relied on the doctor’s excitement to cloud their caution.

When he saw the realization flash across the doctor’s faces, Alexander released his hold and let the hook fly across the room.

The door separating Alexander from the doctors rebounded open once the pulled force was absent.

Peter and Jacob darted to the hallway door and towards the safety of the hallway. Their escape was cut short by the gripping hands of Alexander Black.

“Now doctors,” he said as he redirected them to the middle of the reading room. “I thought that you were coming to give me some news.

Why leave before you have a chance to tell me?”

“Alexander,” Jacob Curtis spoke as his eyebrows raised to a point so high across his brow that they were almost joining his hairline, “you know the rules. Why don’t you get back into your bedroom, and we will agree not to tell Doctor Straus about this episode?”

“Because, Doctor, my education is complete. At least this part of my education. My undergraduate work, if you will. I feel confident that I am ready to enter the world that I have studied so diligently over these several years.”