Heat: A Soldiers of Fortune Romance 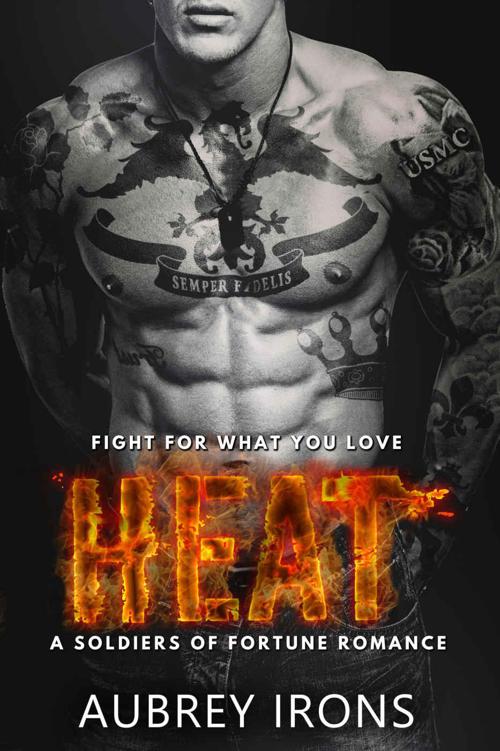 Five years ago, that cocky, egotistical a**hole played me like a fool and broke my heart.

He’s like a gasoline fire; a scorchingly hot disaster, and if I’m not careful, I’m going to get burned.

I’m on track to be the youngest New York State Senator ever elected; the bright, gutsy, good-girl media darling. Except my campaign funding just went dry, and it looks like the only solution is coming from the last person on Earth I’d ever want to take anything from. Oh, and it turns out bad-boy, tough-guy Hudson will be shadowing me 24/7 after he makes it clear that he’s in charge of “protecting the investment."”

Yeah, just perfect; a reckless, irresistible d*ck like Hudson Banks is the
last
person I need being “in charge” of anything to do with me.

the feeling of that
massive
hardness I know he’s packing between his legs. It’s not fair that he’s even hotter now than he was back then. It’s not fair that those smoldering, arrogant eyes and that cocky, panty-melting grin still make me warm in places they shouldn’t. And it’s definitely not fair that five years later, I still can’t get him out of my head.

So it looks like I’ve got two races on my hands: the one for election, and the one against the burning heat threatening to tear us both apart. But on the sprint to the finish line, what happens when the man who has everything comes up against the one thing he can’t have?

This is a work of fiction. Names, characters, places and incidents are solely the product of the author’s imagination and/or are used fictitiously. Any resemblance to actual persons, living or dead, organizations, actual events or locales is entirely coincidental. The author acknowledges the trademark status of products referred to in this book and acknowledges that trademarks have been used without permission, except in the case of brief quotations used for review.

All Rights Reserved. No part of this book may be used or reproduced in any manner whatsoever without written permission from the author, except in the case of brief quotations used for review purposes.

This book is intended for mature, adult audiences only. It contains sexually explicit and graphic scenes and language which may be considered offensive by some readers. Please do not continue reading this book of you are under the age of 18 or are offended by content of this nature.

All sexually active characters in this work are 18 years of age or older and all acts of a sexual nature are completely consensual.

To my husband, for indulging me in my wild ideas and giving me wings to fly.

To K, for being incredible.

To Lee, for demanding that I dream.

I grind into him, whimpering into his mouth as I feel his body hard against mine and feel his hands slide down to cup my ass. I’m shoving aside the voice inside my head that’s screaming at what a
terrible
idea all of this is, trying to smother it as Hudson smothers my mouth with his lips. I shouldn’t be kissing him like this, or moaning into his mouth as his hands grab my ass, or arching my back and rocking my pelvis against the thick hardness of his cock pressing at the front of his pants. No, I
definitely
shouldn’t be doing any of those things; not here, not now, and
definitely
not with Hudson Banks.

“We- we shouldn’t be doing this!” I whimper out, moaning as he sucks my earlobe between his lips.

“We should
definitely
be doing this,” He growls softly; “I can’t even tell you what I wanted to do with you the last time we were up here,” He says hotly into my ear, sending shivers through my whole body.

Oh, I want to know
everything
he wanted to do with me; everything he
wants
to do with me; “Show me,” I whisper out, my voice heavy with lust, and I’m shocked at my own words even as true as they are.

He’s yanking my prim and proper jacket off of me, and I’m shrugging it off my shoulders as I moan into his kiss. “Well,
this
, for one,” He
tears
my conservative blouse apart, sending the buttons scattering and making me gasp at the ferocity of him as I arch my back towards him as I feel his hands sliding over the thin lace of my bra, making my nipples pucker into hard points under his touch. His mouth slides down my neck, nipping at my skin as he kisses over the tops of my breasts. I whimper as he yanks my bra down, baring my nipples to his hungry eyes, and then I cry out as his lips wrap around one rosy nub; his tongue darting across and sending jolts of electricity shooting through my whole body.

I arch my back and thrust my chest out towards him, gasping as his mouth sucks at my sensitive nipples; “Th- that’s all you’ve been waiting five years to do?” I moan out, biting my lip as my hands running up the muscles of his arm. He answers with his hand sliding up the inside of thigh, and I whimper as he pushes my conservative skirt up around my waist as his fingers find my heat.

“No,
Princess
,” He says with heat in his voice as he brings his head up to stare into my eyes; “That is
far
from the only thing I’ve wanted to do to you for the last five fucking years.”

He growls as his fingers slide beneath the edge of my soaking wet panties and slide through my folds. “God, you’re so fucking wet for me,” he husks into my lips, and I gasp, my hands clutching at his arm muscles as he pushes a finger inside. I kiss him with a ferocity as I feel him curl his finger inside of me, stroking that special place just inside and making me whimper and moan for him. No one has ever spoken to me like that before, and the barbaric
animalism
of it has me desperate for more.

“Take off your shirt for me,” he says thickly, punctuating his words with a curl of his finger.

“Jesus, are you always this bossy?” I say with a grin as I begin to pull the torn blouse from my shoulders.

“Bossy?” He pulls back from lips with hungry grin on his face; “Princess, I have not even
begun
to show you bossy.”

“They’re fucking
what?!
” I almost drop the glass of champagne in my hand as I feel the floor practically drop out from beneath my feet. My campaign manager Donald’s face is impassive and steely - pretty much like it always is even in crisis meltdown situations like this - with his bushy grey eyebrows furrowing slightly like they do when he’s got news for me neither of us want to hear.

“They’re pulling out, Reagan; entirely.” I see him reach out of habit for the phantom pack of cigarettes in his shirt pocket that hasn’t been there for five years; the frown in his eyebrows deepening.

He sticks a pen between his lips instead of his old vice and glowers at me; “Every damn penny.”

I swear fiercely under my breath, clenching my hand tight and digging my nails into my palm as the reality of the situation hits me like a wet blanket; “How fucked are we?”

Donald tenses his face; he hates when I swear, especially in public and
especially
in public when there are cameras
everywhere
. “Lower your
voice
, Reagan” He mutters through the pen in his teeth, looking at me like I’m an ill-behaved child in that way that drives me
crazy
. In the movie version of my life, Donald is the kind and sagely grandfatherly type who guides me along a path of adorable metaphors and teary-eyed life lessons to victory. In reality, he’s cold, calculating, and robotically efficient at keeping me in line with his battle plans. But then again, kindly grandfatherly types doling out anachronisms like they were candy don’t win elections; robots do.

“They were forty percent of our campaign.”

I can feel the breath leave my lungs as the room spins around me; my lips moving soundlessly as my brain searches for the words to possible use here. This simply
can’t
be happening; not after we’ve worked
so
freaking hard to get to where we are.

Donald glares at me as he furiously chews on his poor pen; “Maybe next time, you’ll
stay on the
damn
speech I give you instead of going off on one of your ‘save the world’ tangents, Reagan. You know they’re going to jump down you throat for that kind of things because-” His phone beeps and he frowns, trailing off as he shakes his head and mutters at whatever’s just popped up, but I can pretty much take my pick of what he was going to say anyways: “because I’m a girl”, or “because I’m the youngest person to ever run for the State Senate of New York”, or my favorite, “because I’m the daughter of the late William Archer; billionaire philanthropist/ arms dealer, depending on who’s opinion you ask.” To most people, I’m either the next great American Dream for politics, or a nut-job, which plays nicely to the split media opinion of eager-eyed media darling or poor little rich girl, depending on which new station you like to watch. I hang my head;
running
was one thing, but dropping out like this is going to be a news anchor joke for
years
.

“So this is it then? We’re done, just like that?” I can hear my voice from outside my body, my ears ringing and my jaw clenching in that way Donald always tells me not to do in front of cameras because it makes me look aggressive. I look down at the trembling glass of champagne in my hand, suddenly wishing it was the size of a movie-theater cup.