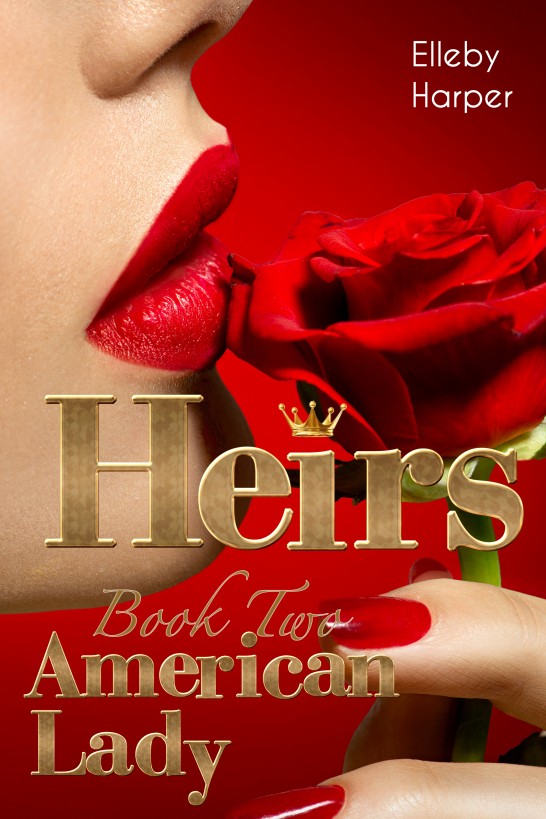 Published by Elleby Harper at Smashwords

This book is a work of fiction. All the characters,
incidents and dialogue in it are fictitious and drawn from the
author’s imagination and are not to be construed as real. Except in
the case of historical fact, any resemblance to actual events or
persons, living or dead, is purely coincidental.

For any inquiries regarding this book, please
email

This ebook is licensed for your personal enjoyment
only. This ebook may not be re-sold or given away to other people.
If you would like to share this book with another person, please
purchase an additional copy for each recipient. If you’re reading
this book and did not purchase it, or it was not purchased for your
use only, then please return to your favorite ebook retailer and
purchase your own copy. Thank you for respecting the hard work of
this author.

One bad to the bone hottie. An inseparable
friendship. Risky decisions.

Welcome to
glitzy, ritzy, glam-filled 1985. Maixent, heir to Europe’s most
glamorous throne, is as cool as stone-washed jeans. Charley, heir
to America’s premier political family, is as hot as neon
sweatbands. But will their hearts fall head over big hair in love
or will the deadly secret from their mothers’ past rip apart a
royal dynasty and a political family?

Secrets & Lies
is the first
book in this 1980s trilogy set in an era where CD players, video
arcades and arm breaking two pound cell phones are as high tech as
it comes. If you like your romance filled with a cast of sizzling
characters, glamorous intrigue and a touch of humor then download
Heirs Book One: Secrets & Lies
to become your
next favorite read.

Discover the journey in
Heirs Book One: Secrets &
Lies
.
Find out how to
get your FREE copy
.

Other books by Elleby Harper

“The lady doth protest too much, methinks.”

From
Hamlet
by William Shakespeare

The phone rang and Nikki spilt her vodka as she
reached for the receiver.

It was the Law Dean’s secretary from
Declan’s college. Nikki’s first thought was that something had
happened to her son.

“No, no,” the secretary assured her. “I’m
terribly sorry to disturb you, Mrs Cassidy, but some sort of
misunderstanding has occurred about payment of Declan’s fees for
the spring semester.”

There was a long pause. Nikki waited it out.
The secretary gave a discreet little cough.

“The check that you’ve written to the
university has been returned by the bank supposedly due to
insufficient funds.” The secretary gave a nervous laugh.

“There must be some mistake,” Nikki finally
said, staring idly out the window. A bright green volkswagon,
mottled with rust, was just pulling into the driveway in a series
of short kangaroo hops. It shuddered to a halt. An arm protruded
from the driver’s side window and jerked the outside door handle to
open the door.

“That’s exactly what I said to the dean!”
The secretary laughed with relief. “The trouble is that in order
for Declan to receive credit for this semester and get his exam
results we’ll need to have the money by the end of March.”

The door swung open precariously on its one
working hinge.

“I am sorry, Mrs Cleaver. I’ll get onto my
bank straight away and sort out the misunderstanding.”

Nikki had her bank manager on speed
dial.

“I’m calling to complain about your bank’s
services,” she blasted the manager. “What do you think you’re
doing, bouncing my checks! I’ve a good mind to close my accounts
with Fairbrother’s and move them somewhere else.”

“Of course you’re welcome to close your
accounts, Mrs Cassidy.” Did the voice on the other end of the line
actually sound happy by her threat? “I’m sorry but we just can’t
extend your bankdraft any further. It’s well into six figures and
we have no collateral to secure it. You haven’t paid anything into
your check account for nearly six months. I don’t have an option.
In fact, if you could see your way clear to paying off the
overdraft as soon as possible …”

Nikki hung up the phone.

She heard the doorbell ring.

Oh, God, what was she going to do? She
drained her glass. Declan didn’t come into his Trust Fund
inheritance until he turned twenty-five, and that was another two
years. Perhaps he could raise a loan himself on the
expectation?

Poppy’s head appeared around the door.
“Lyric Duveyung is here to see you.”

“I told him you’d say that, Miss Nikki,”
Poppy frowned, her red and yellow beaded earrings jangling
indignantly. “But Miss Charley told me I was to make sure you sat
down with him. It’s time you sorted something out, Miss Nikki. Fen
and I are tired of not being paid and if you don’t want a general
staff walk out, you’d better fix up your finances with Mr
Duveyung.”

“That’s loyalty for you!” Nikki scowled.

The door opened revealing a hesitant,
overawed Lyric Duveyung. Once she had learned that her mother’s
accountant had resigned, Charley had lost no time in matching her
mother up with Lyric, a friend from former college days. “You’ll be
perfect for each other. Lyric likes to be bullied and you like to
bully,” Charley had told her. Nikki had not been impressed at their
first meeting and was even less captivated today.

“Oh, it’s you!” she said ungraciously. Nikki
had been avoiding Lyric’s phone calls and his arrival today was an
act of desperation to nail her down.

“I’m afraid so, Mrs Cassidy. Your
housekeeper told me you were expecting me.”

“Well, since you’re here you might as well
sit down and sort something out for me.”

“That’s what I’d like to do,” Lyric
protested earnestly, seating himself at Nikki’s desk and lifting an
enormous brief case onto his spindly knees. He pushed his
tortoiseshell frames back up his nose and began pulling out a
rainforest of papers.

“You should get a new suit, Lyric. That one
offends my sartorial sensibilities.”

“I would if some of my clients would pay
me,” he gave a nervous trill under Nikki’s ferocious stare. “It’s
taken me nearly five weeks but I have finally untangled your
accounts. The bad news is that it seems your previous accountant
missed paying taxes due to a lack of funds in your account. It
works out that you currently owe three years’ of back taxes.”

“The IRS men are always getting shirty about
something,” Nikki dismissed the news. For Nikki spending money was
like breathing air and she couldn’t comprehend that her outgoings
so vastly exceeded her revenue that her debts were more prolific
than her Cassidy relatives.

It hadn’t helped that her just released
summer collection had been soundly thrashed by the critics.
“Boring” and “predictable” were the kindest of the adjectives
fashion editors had slung at her head designer Giancarlo’s
creations.

“I’ve also been dealing with cancelled
orders even from your staunchest clients. In fact, orders for
American Lady’s next season have dwindled to only two of your
regular stores.”

“Accountants are always full of bad news,”
Nikki said, eyeing the bureau where the vodka bottle sat. She had
been nursing too many vodka martinis lately, but she needed them to
dull her jangling nerves. She asked politely, “Would you like a
drink?”

“Not for me thank you.” He watched her move
towards the bottle with a dubious eye.

“I don’t suppose you have any good news?”
Nikki asked, taking her vodka neat.

Lyric gave another anxious trill causing his
Adam’s apple to bob up and down nervously.

“Actually no. Your fashion design company,
American Lady, has a severe cash flow problem and if you want to
get a winter collection onto the runway we’ll need to find a way to
pay your employees’ salaries.”

“Why should they get paid when I’m not?”
Nikki demanded sharply, rubbing her temples where an anxiety
headache was beginning to throb. “By the way, I’ve just talked to
my bank manager and it seems he’s bouncing my checks. You’re going
to have to do something about that, Lyric, otherwise Declan will be
kicked out of college. Imagine how embarrassing that would be,”
Nikki shuddered. She had a meeting this weekend with Paddy Cassidy
to break the news of her engagement with Lorenzo and the last thing
she needed was to give him more ammunition for disapproval.

Lyric shuffled through the papers from his
briefcase.

“Yes, your overdraft is a worry,” he
concurred. “But, I’ve worked out quite a comprehensive schedule for
you to follow to cut costs.” Proudly he handed over a bound folder
as thick as a photo album. Reluctantly Nikki took it from his hand,
rifling the pages indifferently until one notation caught her
eye.

“You want me to fire Fen?” she asked
incredulously.

“You pay him a salary of nineteen thousand
dollars and he drives the car maybe once a month. Oh, and by the
way if you trade in the BMW you could buy quite an economical Ford
or Chrysler four cylinder which would save you approximately eight
hundred dollars in gas for the year, not to mention five hundred
dollars for tune-ups.”

Nikki blanched whiter than blued fabric at
the listed economies. Is that all accountants were good at? “This
is crazy. Fen is Poppy’s brother. If I lay him off Poppy will leave
me. I rely on Poppy. She’s discreet and doesn’t talk to the press.
I thought you were going to give me practical solutions!” she
retorted disgustedly.

“I have been very thorough,” he protested,
gulping so that his Adam’s apple jiggled up and down like a yoyo.
“The measures I’ve outlined in that document will save you enough
to make the first down payment on your IRS bill on May 1. I’ve
negotiated terms with them and they’re willing to let you pay your
taxes quarterly for the next five years and they have agreed not to
fine you. Or even send you to prison.”

“But I still have to pay Declan’s school
fees and my bank overdraft, not to mention plan my society
engagement party,” Nikki protested. These problems were more real
to her than a vague threat from the IRS.

“There is another solution,” he added
slowly, his hands skittering around the desk like nervous kittens.
Nikki noticed that he had musicians’ hands. They had slender
fingers with large knuckles.

“Don’t keep me in suspense.” She sipped her
vodka.

“As a final resort you could always sell
Rosedale.” His voice faded away while his fingers gathered speed
like horses cantering over the finish line in the Kentucky
Derby.

“So when do you think I should leave
Westchester and move into a hovel on the Lower East Side?” She
glared at him indignantly.