Read Heirs of the Body Online

Heirs of the Body 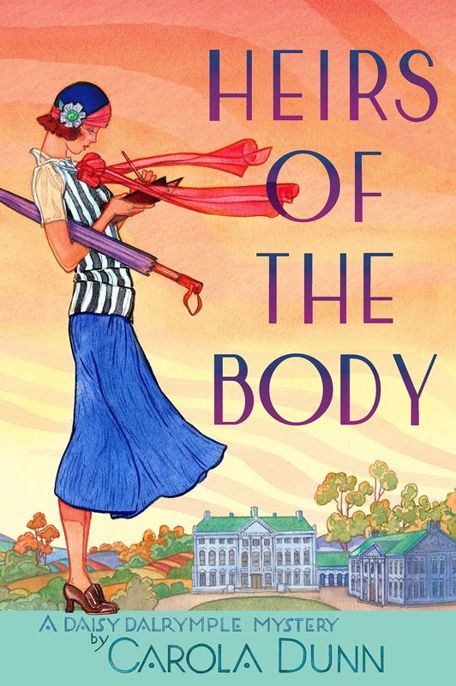 My thanks to Kerry-Ann Morris of Jamaican Echoes; Nancy Mayer, my consultant on matters of inheritance; Pat Jones of the Railway & Canal Historical Society; Doug Lyle M.D. and Larry Karp M.D. for matters medical; RAC librarian Trevor Dunmore; Malcolm of the Telephone Museum; Dominique Bremond for checking my French; Mary Jarrett for her kind hospitality; and last but not least, my ever-faithful companion in my research jaunts, Carole Rainbird.

“Darling, what
on earth are ‘heirs of the body’?” Daisy enquired, frowning at the wad of blue Basildon Bond writing paper in her hand. She had been busy all day and was only now, after dinner, opening the afternoon post.

“Coroners?” Without looking up from the
Evening Standard,
Alec reached for his whisky, an indulgence usually reserved for celebrating the end of a big investigation. “Undertakers? Worms?”

“Ugh, Daddy, that’s disgusting!” Belinda’s Easter holidays had started just a couple of days earlier, and her father was apt to forget to mind his tongue in her presence.

“What, worms? Just think, if they didn’t do their work we’d be up to our necks in bodies.”

“Alec, really! In any case, ‘heirs’ is the important word here. Cousin Edgar’s coming up to his fiftieth birthday and apparently it dawned on him a few months ago that he hasn’t the faintest idea who is heir to the title and Fairacres.”

“Your letter’s from Lord Dalrymple?”

“No, Cousin Geraldine. She’s frightfully scathing about ‘heirs of the body,’ but I can’t make out why.”

Daisy cast an anxious glance at her stepdaughter.

“It’s all right, Mummy,” Bel said indulgently. “I know what legitimate means, and illegitimate. It’s whether the mother and father are married or not.”

How did children find out such things? Daisy wondered. She was sure she hadn’t been aware at the age of thirteen that procreation without matrimony was even possible. Times had changed between 1911 and 1927!

“I read it in a book.” Bel answered her unvoiced question. “And looked it up in the dictionary.”

“Well, darling, I’m glad you’re using your dictionary. But I was rather hoping you didn’t know what it means.”

Since Daisy frequently decried the persistent influence of Victorian attitudes in older generations, she was left speechless.

Alec had set aside his paper to fill his pipe. Now, between the vigorous puffs required to get it burning, he said, “I’m not really up in all that stuff, but the ‘body’ bit must mean that step- or adopted children don’t count. And the original entail, or patent, or will, or whatever must have specified heirs
male
of the body. Otherwise, your brother having died, love, I think your sister’s eldest son would have inherited the estate and title from your father. Or perhaps Violet first, and then Derek. But don’t quote me on that.”

“A new law was passed just last year, though, and I’m not sure what effect it has in a situation like this.”

“Yes. Cousin Edgar always felt Father’s lawyer—the old family firm since forever—condescended to him because he’d been a schoolmaster, not brought up to his new station in life. He was very impressed with Tommy’s part in that kidnapping business.… You didn’t hear that, Bel.”

“I think I’d better go and read in bed,” said Belinda with dignity, “if you’re going to keep talking about things I’m not supposed to hear.”

“Heavens yes, it’s after ten. Past your bedtime.”

Belinda kissed each of them goodnight, then said, “Mummy, may I go and see the twins? Just a peek?”

“Of course, darling. You don’t need to ask. Quiet as a mouse, though.”

“I know. I just like to ask in case Nurse Gilpin catches me. She can’t fuss if you’ve said yes, can she?”

Alec grinned. “I wouldn’t count on it. Every victory over Mrs. Gilpin is temporary.”

“I don’t care much if she does fuss. They’re my brother and sister, after all. Daddy, is Oliver your ‘heir male of the body’?”

“He would be if I had a title, pet, but you can’t inherit a job with the Metropolitan Police. As it is, you’re all my heirs.”

Daisy was not prepared to go into the business of a father’s part in the bodily side of parenthood. “Run along and tackle Nurse, now, darling,” she said firmly.

Daisy sighed. Sometimes life seemed to be a perpetual battle with Oliver and Miranda’s nanny, whose Victorian attitude dictated that parents had no business in the nursery.

She returned to consideration of Lady Dalrymple’s news. However unrewarding, it was bound to be infinitely preferable to the letter that had lurked beneath it in the pile, from Daisy’s mother, the dowager viscountess.

“I’m surprised Pearson didn’t find out who the present heir is when he took over.” Alec poked disgustedly at the bowl of his pipe with a used matchstick, then reached for the matchbox and started the flare-puff routine again.

“It may not have crossed his mind. Cousin Edgar probably has a perfectly sound will leaving everything to his wife, and Tommy doesn’t go in for aristocratic clients. In fact, I think he does his best to avoid them, because of Madge being Lady Margaret. She told me he’s too independent to want to take advantage of her family connections.”

“I expect all he really wants is to avoid the complications of entailed estates.”

“I wouldn’t blame him,” said Daisy, trying to make out what Cousin Geraldine was going on about. Her writing was the kind that looks very neat but is difficult to decipher. “Oh, she’s complaining about the Dalrymples not being prolific in the production of sons. What cheek, when she hasn’t produced a single heir of the body herself, male or female. Besides, it worked to her advantage. If I’d had lots of brothers, she wouldn’t be a viscountess.”

“What exactly is Edgar’s relationship to you?”

“I’ve never worked it out.” Daisy had next to no interest in the ramifications of aristocratic family trees, unlike her friend Lucy. Possibly as a result, Lucy had married the younger son of a marquis and was now Lady Gerald Bincombe, whereas Daisy had married a Scotland Yard detective. “Some sort of second cousin, I think. Or third. Once removed, I’m pretty sure of that. Geraldine says they’re having to go back to my great-great-grandfather’s descendents now. That would be my great-grandfather’s brothers, I suppose.”

“Great Scott! They must have been born about—let’s see—1800, or so.” Smoke spiralled up and Alec sat back contentedly.

“The second brother was Edgar’s grandfather. Apparently the third never married. The fourth and youngest got a governess into trouble and was shipped off to the West Indies—at least, that’s the family legend.”

“Not one either your father or your mother would pass on to you.”

“How right you are. Gervaise told me.” And Gervaise had gone off to war when she was sixteen, so perhaps she had known about unmarried mothers when she was thirteen. “According to the story, the black sheep wrote to his mother when he married, but when he and his bride were not welcomed home with open arms, he was never heard from directly again. A trickle of news came in from travellers. Rumour reported that he had a large family living on the edge of respectability.”

“Who were not listed in the family bible, I take it.”

“I can’t say I ever looked, but I suppose not, or Edgar wouldn’t be having so much trouble now. My—let’s see—my grandfather also had a lot of children, a typical Victorian family, so they must have assumed the direct line was well assured. Geraldine says Tommy started the search by hiring someone to go through all the musty old papers in the muniments room. Oh, I think this says—”

“Is there an end to this story, Daisy?”

“Aren’t you itching to make the acquaintance of all the skeletons in my family’s cupboards?”

“Geraldine does go on a bit. Six pages! Let me see if I can find…” She skimmed through the rest, picking out phrases here and there. “Advertised in newspapers throughout the Empire.… Three claimants responded already—Good heavens! They’ll be at each other’s throats—Tommy thinks—No! She can’t be serious. Or am I misreading?…” She went back to the beginning of the sentence and pored over it word by word.

“‘No’ what?” Alec’s attention was caught.

“I don’t believe it! She wants me to be present when Tommy interviews the would-be heirs. Tommy wanted Edgar, as head of the family, but Geraldine says he’d be completely useless.”

“I’d agree with her there. Unless one of them turns out to be a fellow lepidopterist, in which case he’d be biased in his favour.”

“And Geraldine herself is not a member of the family by birth.”

“What about your mother—No, the same applies. Though I hardly think she’d appreciate anyone reminding her of the fact.”

Daisy giggled. “Darling, can you imagine either of them in attendance? The poor heirs would turn tail and decide the game wasn’t worth the candle.”

“I doubt if she’s ever spoken to a solicitor in her life. If Tommy really considers it necessary, I’ll do it.”

“Come off it, love. Don’t try to tell me you’re not dying to listen in.”

“It might be interesting. And, you never know,” she added persuasively, “I might spot something proving one of the claimants is a fake.”

“I presume that’s why Pearson would like a family member present. Don’t worry, I shan’t try to stop you, if he’s agreeable. In fact, I’d bet he approached Edgar first only as a matter of etiquette and he was really angling for you all along.”

Such a vote of confidence deserved a kiss, which Daisy duly bestowed. The rest of Geraldine’s screed and the dowager’s letter did not get read that evening.

A fresh
crop of envelopes, the first post, was waiting beside Daisy’s place at breakfast next morning.

“Heavens, what a pile!” she exclaimed, sitting down.

“There’s some of yesterday afternoon’s post, too, madam,” said Elsie, the Fletchers’ parlourmaid, “that you didn’t open last night. You left it in the sitting room. I put it on your desk. Tea or coffee, madam? And how would you like your eggs?”

“Just tea and toast today, thank you.” Daisy was beginning to fear that bosoms and hips had gone out of fashion forever. She tried, she really did, but her curves just would not go away.

As Alec and Belinda decided what kind of eggs they wanted, she flipped through the post. Mostly tradesmen’s bills and circulars—she’d deal with those later. As Alec disappeared behind his
Daily Chronicle
, she slit open an envelope addressed in her Indian friend Sakari’s beautiful and beautifully legible hand.

“Bel, Mrs. Prasad’s invited you to go to the zoo with Deva today. She’s invited Lizzie as well, and two other girls. Brenda and Erica, Do you know them?”

“Oh yes, Mummy, don’t you remember? They were at school with us before we went away to school. May I go? Please?”

“Anyone would think you’d never been to the zoo before,” said Alec.

“Darling, it’s as much about seeing her friends as seeing the animals. Yes, of course you may go, Bel. Eleven o’clock, she says. Do you want to bike down or would you like a lift?”