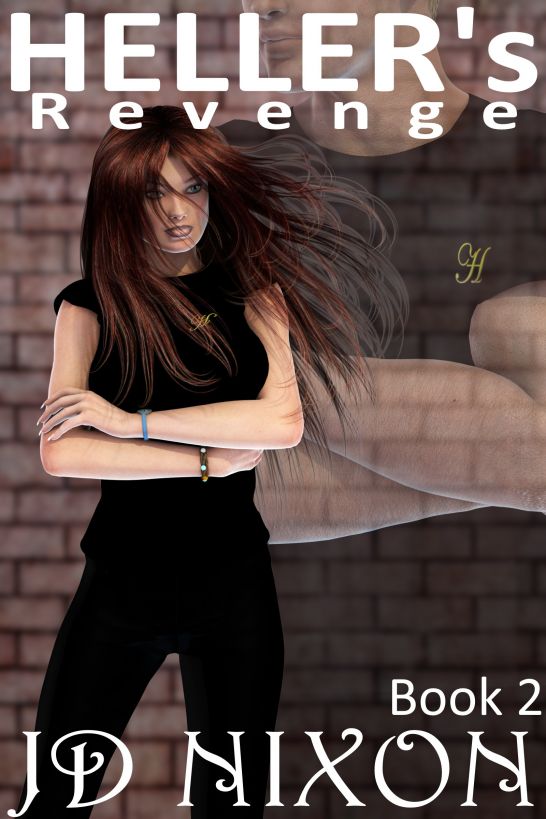 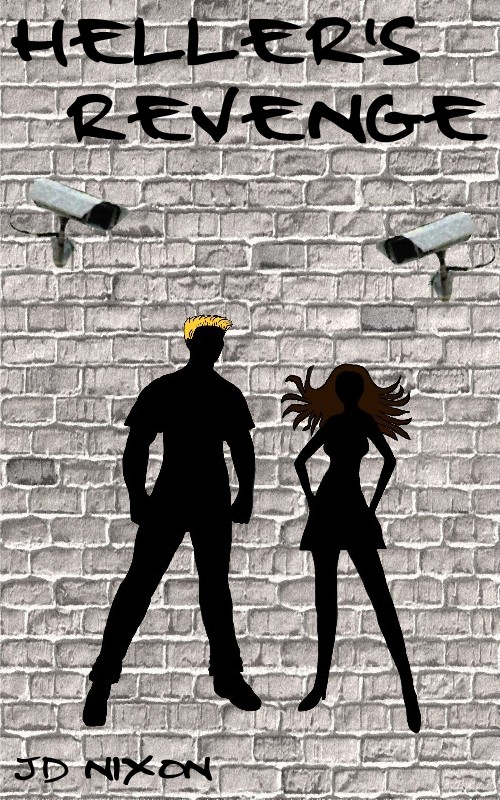 This book is a work of fiction. All
characters and locations in this publication are fictitious and any
resemblance to real persons, living or dead, or real locations, is
purely coincidental.

JD Nixon is an Australian author and
Australian English and spelling have been used in this book.

Discover other titles by
JD
Nixon
at
Smashwords.com
:

“Sweet baby Jesus, your ass is
so big in that!” he wailed in his heavy accent, clutching fistfuls
of hair in anguish. “It’s like watching two planets collide when
you walk.”

The other women in the dressing
room with me sniggered softly behind their beautifully manicured
hands, smugly confident in their own prodigiously perfect
posteriors.

He circled me again, face
creased with sheer wretchedness, almost on the point of tears. “I’m
ruined! Your huge ass is going to destroy my business!”

I stared down at the little man
raging in front of me and thought to myself, client or not, if he
made one more crack about the size of my butt, I would seriously
damage his ability to pass on his genes.

When I’d rolled out of bed this
morning, running late and quietly cursing that final glass of wine
I’d imbibed the previous evening, I certainly hadn’t expected to
end up on a stage in front of five hundred people.
Especially
wearing nothing but a skimpy matching bra and
panty set consisting of little more than a few tiny strategic
strips of black leather held together with enough silver chains to
overpower the entire cast of
True Blood.
The whole ensemble
was accessorised with a pair of black leather and silver chain
wristbands and a killer black pair of fuck-me high heels that I
wobbled in dangerously every time I took a step.

As I reluctantly stepped out
onto the stage, I surveyed the audience, realising that it was like
one of those awful dreams where you find yourself naked at work for
some unknown reason – but worse, so much worse, because this was
actually happening to me. And although I visited the gym regularly,
any woman was bound to start wondering how big her butt
really
looked in those bitsy panties when five hundred
shallow, easily bored people were casting critical eyes over her
body.

I scanned the crowd for my
workmates, finding them easily by their black uniforms, gigantic
heights and their stance, beefy arms crossed with menacing
inference. Then I clocked their face-splitting grins at my
predicament, not to mention their appreciative nods and winks at
each other as they checked out my bare flesh. Fuming, I
contemplated how to make three huge men permanently disappear, to
prevent news of my embarrassing situation finding its way back to
the office and our boss, Heller. Perhaps a chainsaw and an acid
bath might help?

It had all started well. As a
newly licensed security officer, Heller had personally chosen me to
join the three men in a job at a major upmarket department store.
The brief was to provide security for its annual lingerie fashion
show and from the conversations I’d overheard in the security
section of
Heller’s Security & Surveillance
, competition
for the job amongst the men had been feral. Maybe that had
something to do with the fact that Jenna Mackenzie, the nation’s
top lingerie model, would be making a guest appearance modelling
the world-famous Masquerade brand of racy burlesque lingerie. Or
maybe it was just because mountain-sized men surging with
testosterone seemed to be extraordinarily interested in attractive
young women parading around in scanty nothings.

I wasn’t sure how the three men
with me had won their coveted positions on the assignment. I
suspected it had something to do with man-to-man combat in a
crowded arena wearing loosely-tied miniscule loincloths, bodies
oiled, using nothing but their hands and incredible muscles as
weapons. Okay, that’s probably just my own personal fantasy, but it
could
have been true if Heller didn’t run his business so
tightly.
Heller’s
was a monument to muscled machismo and as
the business’ only female employee, I still struggled to find my
place among all the brawny men, despite having worked there for
five months.

I’d been surprised by who had
been chosen in the end. Heller and his hard-arse security manager,
Clive, hadn’t been able to spare any of the older, more experienced
men like Rumbles and Tysen, because they were needed for more
important jobs. But the assignment wasn’t judged by anyone to be
potentially dangerous, even though in the past Jenna had been the
target of a couple of over-zealous male fans who verged on being
stalkers. So the privilege had fallen instead to three younger,
greener men. At twenty-five, I was the oldest of our team and with
the least experience, but my first impression of the trio was that
they were all of an age to still instinctively think with their
little heads rather than their big ones. And that would make the
lingerie show assignment just that tad more interesting for
everyone.

We had driven to the department
store in one of the
Heller’s
black fleet 4WDs, wearing our
uniforms – black polo shirt with a gold monogrammed
H
logo
on the pocket and SECURITY written in gold across the back, black
cargo pants, chunky black boots and a black utility belt. The men
were fired up and swapping wisecracks on the way, and on arrival,
we’d taken up our positions well before the show started. One guy,
Tony, and I were at the front near the stage, the other two at the
back, keeping an eye on the crowd and grumbling about the distance
between them and the catwalk. Four of us seemed like overkill to me
as the organisers had carefully handpicked the guests. I’d read in
the paper that not getting an invitation was the social
kiss-of-death in that circle of people who didn’t work too hard for
a living in this city. I hardly need to mention that I hadn’t
received an invitation, but casting my eyes over the assorted
posers, butt-kissers and Z-grade celebrities in attendance, I had
no great regret about that.

The show was going smoothly and
the audience was behaving itself, but the continuous stream of
young lovelies strutting down the catwalk distracted Tony from his
duties. I guess that’s why Heller sent me along, so that at least
one
of us could keep our mind on the job. Tony stared up at
the women, his mouth agape, an expression of pure craving on his
face that made me wonder how long it had been since he’d last
scored a shag. I’d seen that look of desperate, despairing sexual
hunger before – in the mirror, before I started working for
Heller.

Thank God those days were
long gone
, I thought happily, letting my mind dwell momentarily
on my planned evening of carnal excess, before dragging it back to
Tony’s dilemma. I reckon a colossal mothership, all strobing lights
and futuristic sound effects, could squish half the audience as it
landed and release an army of aliens to take me away for a thorough
probing, and Tony wouldn’t even notice, all his attention captured
by the procession of perky boobs and butts in front of us. He
thought his cup runneth over, and I thought so did quite a few of
the bra cups of the buxom models on display and speculated on how
much of that perkiness was surgically acquired.

The first half of the show
finished and the models disappeared offstage. In the interval,
before the Masquerade parade started, the guests were plied with
French champagne and canapes made from hideously expensive
ingredients, but so small in size that plankton would still have
been hungry after eating a couple. We weren’t meant to eat on duty,
and certainly not food prepared for guests, but my tummy was
growling because I’d missed breakfast in my rush to be ready on
time.

I managed to nick three canapes
from a tray borne by a spotty teenaged waiter whose attention was
momentarily diverted by the unnatural cleavage of one of the
nation’s top soapie stars. I remembered her from my own brief stint
as a minor character on the soapie
Summer Days
– a woman so
thick that she thought climate change was when winter turned to
spring. The bitchy joke circulating at the time amongst us lesser
beings on the set was that she didn’t have a body double, but a
brain double.

I shrank back into a dark corner
in the doubtful case that she’d recognise me. Hastily, before
anyone noticed, I shoved the canapes in my mouth, mulling over the
flavours as I chewed. Truffles – tick; Wagyu beef – tick; west
coast lobster – tick; southern coast oysters – tick; caviar – tick;
hint of saffron – tick; and I believed that the shiny substance on
top was 24-carat edible gold leaf. I had just dined on the world’s
wankiest titbits.

“Hey you!” hissed an accented
voice in my direction.

Guiltily I spun around,
desperately swallowing the last evidence of my misbehaviour.
Oh
shit!
I was in trouble now. That mouthful of mine had probably
cost the organisers close to $200.

Now the models had left the
stage, Tony finally noticed me again and raised his eyebrows in
question. I shrugged, squared up and went to face my bollocking. I
was probably going to be fired, sent back to
Heller’s
in
disgrace and replaced with a colleague who was more professional
and less hungry. I dreaded what Heller would say about that. He
could be a little scathing sometimes.

“In here,” the voice hissed once
more and I was grateful that I’d be fired in private, not in front
of everyone, which wouldn’t have done Heller’s branding (nor my
lifespan when he found out) any favours. With one last rueful
glance over my shoulder at Tony, I pushed through the gold curtains
that separated the catwalk from the backstage area to confront my
accuser.

He was a tiny man, so camp that
boy scouts could have pitched their tents on him. He had
shoulder-length brown hair generously tinted with blond, a wisp of
a pencil moustache across artificially inflated lips, thick black
straight eyebrows and black bedroom eyes enhanced with a touch of
makeup.

He was wearing something
straight out of
The Dominatrix Doctrine for Diminutive Dudes
– black singlet top featuring a sparkling silver silhouette of Lady
Gaga, silver-studded black leather jacket, tight purple leather
pants blatantly stuffed with socks, knee-high chunky black military
boots that made him look as though he was considering invading a
small country in his holidays, and more piercings than a
porcupine’s blow-up sex doll. I’m not great with accents, so
couldn’t tell where his was from, but I guessed some part of Europe
– maybe France? It was certainly different to Heller’s accent,
which I also had miserably failed to identify.