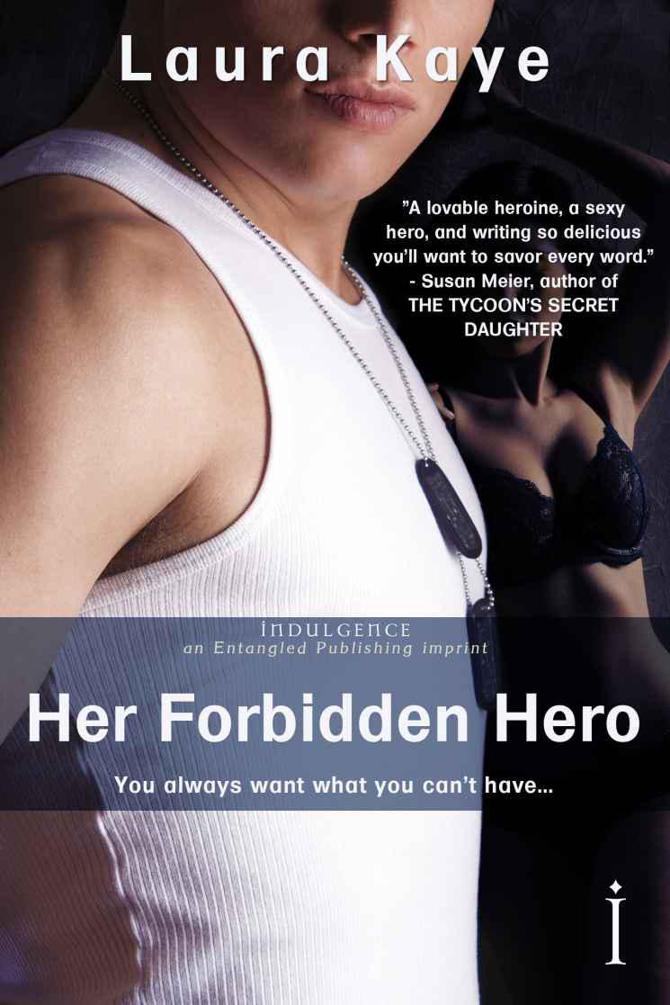 Copyright © 2012 by Laura Kaye. All rights reserved, including the right to reproduce, distribute, or transmit in any form or by any means. For information regarding subsidiary rights, please contact the Publisher.

And for saying, “Uh…YES PLEASE”

With seventy-five dollars and a maxed-out credit card to her name, Alyssa Scott sat in the driver’s seat of her beat-up Corolla and stared at the building where she hoped all her dreams would come true.

Whiskey’s Music Roadhouse might not be the stuff of other girls’ dreams, but it was the biggest event venue in Western Maryland. Between Alyssa’s love of music and her weeks-old degree in restaurant management and event planning, it was exactly the kind of place she wanted to build a career. That Marco Vieri, her brother’s best friend and the man she’d loved for as long as she could remember, also worked there made Alyssa feel like today’s interview was bigger than just a possible job—it felt like the beginning of the rest of her life.

She opened the car door and stepped into the sticky heat of the late May sun. Her car was one of the few in the giant parking lot—not surprising for eleven a.m. on a Thursday morning. According to the website, Whiskey’s wasn’t open for lunch except on Sundays when they held two shows, one in the afternoon and another in the evening.

Huge interlocking neon signs in the shapes of a curving keyboard, electric guitar, and bottle of whiskey stood dark along the length of the roof. She bet that at night, they illuminated the whole parking lot with a rainbow of flashing colors. As she made her way to the front doors, Alyssa’s imagination took off and placed her in the center of a packed show—the frenetic energy of a charismatic band, a pounding bass beat throbbing through her bones, great music setting her soul on fire, and the heat and excitement of the audience all around her.

Alyssa tried the door handles but found them all locked. She walked over to the side, but it appeared a long way to the rear of the building, and she didn’t feel comfortable poking around by herself.

Back at the double doors, Alyssa leaned in close to peer through the glass, humidity pressing down on her shoulders. Inside, a wide lobby sported black and white posters on the walls of upcoming bands, and a ticket booth with a shuttered window sat to the left. A thrill of excitement shot through her. One day, she’d be responsible for organizing events like those.

She wiped a bead of sweat from her forehead and fished through her purse for her cell phone, trying to avoid thinking about not just how much she wanted this job, but how badly she
needed
it. Her intended roommate had gotten engaged a week before they’d been set to move into their new apartment, forcing Alyssa to forfeit her share of the security deposit until her roommate could pay her back.
If
she paid her back. That deposit represented most of what she had to her name, and the only people who had answered her last-ditch Craigslist ad were total creepers.

No way was she taking a chance.

Alyssa had debated scrapping her plans to return to Frederick, but it was the only place in the world she had any roots, and she couldn’t afford to accept the unpaid internship offer she’d received from a previous employer in DC. As a teenager, she’d always thought of Whiskey’s as
the
place where she could pursue all her interests. Once she landed the interview, knowing Marco worked there, it just seemed…right. And definitely too good to pass up.

So she’d thrown all her chips into Frederick, and now she
really
needed this job. And she intended to get it. The alternative was
not
an option.

Finally, she found her phone and dialed. The manager’s number rang once, twice, and she glanced into the lobby—

Right into an older man’s face.

She gasped and bobbled her phone, unable to catch it before it clattered to the pavement.

The man fumbled with a key ring for a moment, then unlocked the door and pushed it open a few inches. “Can I help you, miss?”

Taking a deep breath, she stooped to retrieve her cell.
Pull it together, Alyssa
. “Oh, uh, yes. I have an interview. My name is Alyssa.”

“Ah, yes. Come on in. It’s already blazing out there.” He pushed the door wider and waved her in. “I’m Pete Wilson, the manager of this joint.”

Alyssa stepped into the lobby, the air-conditioning setting off tingles over her skin after those long minutes outside. “Alyssa Scott.” She held out her hand and he smiled as he shook it, his eyes crinkling at the corners.

Alyssa followed Pete across the lobby and past the large, dim bar area where her brother had mentioned Marco worked. Her heart gave a weird little skip at the thought of him. “Is Marco Vieri here?” she asked.

Pete slid his hands in the pockets of his slacks and turned to her. “Yes, ma’am. You know Marco?”

“We grew up together. He’s my brother’s best friend.”

“Yeah, he’s the best.” Alyssa chuckled. Never once had she thought of Marco Vieri as a kid. Tall, dark, and nearly five years older than her, “kid” was the least likely description she’d ever use for him. He was the cutest, most loyal guy she’d ever known, and her chest ached with the desire to see him again. It had been so long. Too long. But now that they’d both come home—her from college and him from the army—maybe she could finally have the chance with him she’d always wanted.

They stepped into the venue’s cavernous rectangular space. A row of lights illuminated the entryway and first group of tables. “Have a seat. I’ll go grab my paperwork.”

As soon as Pete disappeared down a hallway off to the right, Alyssa sank into the worn wood chair, dropped her purse to the floor, and looked around. She’d never seen a show there, and in the darkness, she couldn’t make out the far end of the space. The floor was tiered so the room was higher in the back and tables formed a horseshoe around the stage. She imagined that created an exciting intimacy with the performers.

“Here we are,” Pete called.

Alyssa forced herself to focus as he pushed the place setting out of her way. She handed him her résumé and accepted the application he asked her to complete. She was so filled with nervous energy—over the job and at the thought of seeing Marco—she couldn’t keep her foot from shaking.
Deep breaths, Aly
. She took her own advice—twice—and managed a bit more calm. At least the application was straightforward.

As he reviewed her materials, he asked her to tell him more about her degree and internships. Landing this job would really help everything fall into place, so Alyssa shoved her nerves aside and detailed her coursework and experience for him, her confidence growing as she spoke.

When she finished, Pete nodded. “This is an impressive résumé, Miss Scott. You’re obviously qualified. Maybe too qualified.” He dropped her paperwork on the table. “This is a family-owned business, and the owners believe strongly in employees working their way up from the bottom.”

“I understand, Mr. Wilson. I’m willing to work hard and learn all parts of the business. And I’ve worked as a waitress for four years.” She leaned forward. “I hope it’s not too much to say, but I’m good at it. I’d be an asset to you.”

He stared at her for a long moment. “Pluck. I like it. Never be afraid to sell yourself, kid. No one else will do it. And call me Pete.” He glanced down at her application and a slow grin brightened his round, friendly face. “You’ll work any shift? And you’re available immediately?”

Alyssa smiled at the enthusiasm in Pete’s voice. “Yes, definitely.”

Her spirits lifted even higher when he told her about the hourly wage and great tips many of the waitresses pulled in. Man, if she could make that kind of money, she’d be able to find a little apartment all her own and not worry about another unreliable roommate. And maybe even put something in the bank.

“I need to check these references, but assuming everything works out, I’d like to offer you the job, Miss Scott. I’m shorthanded and the summer is always crazy around here. I need good help, like, yesterday. And if you live up to the potential I see here, there’s no reason you can’t work your way up through the business.”

He smiled. “When could you come in for training? Read the manual, spend some time with the menus, take the tour. All that good stuff. It’s paid time, of course.”

“As soon as it’s convenient for you. My schedule is totally free.”

“Yes.” No sense beating around the bush. Not with only enough money for one night’s hotel stay in her wallet.

“In that case, sit tight and I’ll go grab an employee manual.”

Alyssa clasped her hands together and released a deep, relief-filled breath. Holy crap, she’d done it!
Take that, universe!
After the debacle with the apartment, she’d really needed this to go her way.

Pete returned with a soft-covered binder and several forms. “This is the employee manual. Why don’t you read through it and fill out the tax information while I call your references. Just need to dot my
I
s and cross my
T
s.”

When Pete left, Alyssa settled down with the lists of policies and procedures. The adrenaline rush of the almost-job stirred up the flock of butterflies already doing loop-the-loops over the possibility of seeing—

“Hey, Pete?” a voice called out from the bar’s darkened archway.

Alyssa’s breath caught. She’d know that voice anywhere. She heard it in her dreams.

Turning in her seat, she could feel her heart racing as Marco stepped into the light. Her gaze drank him in. He carried a cardboard box in his hands, heavy enough to pop out the biceps under his short-sleeve T-shirt. The last time she’d seen him, he’d been on leave between deployments and he’d been wearing camouflage—“drop-dead sexy” was the only way to describe him in uniform. Now, his brown hair was longer and messy on top, as if he’d run his fingers through it, but he still looked every bit the soldier he’d been. He hiked up the box and it pulled at the hem of his shirt, exposing a thin slice of lean abdomen. Her eyes trailed down over a pair of black jeans that hugged him in all the right places.

The Mayflower and the Pilgrims' New World* by Nathaniel Philbrick
Handbags and Poobags: Tales of a Soho Boxer Dog by Alice Wright
Lieberman's Choice by Stuart M. Kaminsky
Sweet Scent of Blood by Suzanne McLeod
Sour Grapes (The Blue Plate Series) by Rachel Goodman
Soul Stealer by C.D. Breadner
We All Fall Down by Peter Barry
Hitched by Erin Nicholas
A Heart Decision by Laurie Kellogg
A Novel by A. J. Hartley