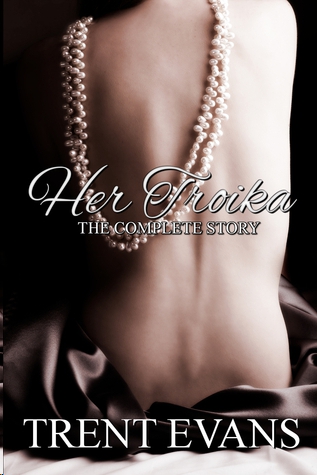 Her Troika (The Complete Story)

Two strict Doms, one brave sub, and a slave auction…

Kurt Erickson has been offered a Dom’s dream job. He picks his own hours, answers to no one, and gets to train submissive women all day. One of those submissive women happens to be his willing wife. Making Breanna's deepest, darkest fantasy come true is the easy part. It may be trickier to persuade his best friend Derek to ... buy her.

Breanna Erickson prides herself on being ready for anything. From the courtroom to the bedroom, she can handle it all. But when her strict, but loving, husband gives her the chance to live out a dream, she finds there are things no woman can be ready for.

Derek’s marriage ended because he buried dark needs that proved incompatible with a vanilla wife. He’s buried those needs, those truths, deep down, determined to never let them hurt him again. Being Kurt’s best friend has many benefits, but some of them are much more than Derek is ready for — or so he thinks.

If you'd like to be notified of new Trent Evans books, sign up
here
for his New Release e-mail alerts.

A Message of Love

A Lady and a Maid

What She's Looking For

© 2014 Trent Evans. All rights reserved worldwide. No part of this book may be reproduced or copied without the expressed written permission of the Author.

This book is a work of fiction. Characters and events in this novel are the product of the author’s imagination. Any similarity to persons living or dead is purely coincidental.

Cover Design by Rachel A. Olson (
No Sweat Graphics
)

My eternal gratitude goes to my good friend, Sheri Savill. Without her, this project would have crashed and burned. “Now, Goddammit! Now!”

A special thanks to Anna for her invaluable honesty, feedback, and encouragement.

For all the lost souls out there, wandering, alone — then finding home.

T
he naked, sweating woman lay lashed securely to the bale of hay, her body motionless in the warm fragrant air of the stall. George Trask slipped in, closing the stall door with a quiet snick behind him. He stood behind her, taking in her beauty in the solitude of the afternoon. None of the adjacent stalls were occupied, leaving the pair blessedly alone, and George free to indulge himself with the woman who was nothing more than property in this place.

He removed his leather kid gloves, draping them over the top of the stall wall. Each enclosure was partitioned with walls and doors just barely six feet high, enough to lend a modicum of privacy but low enough that a passing groom or Owner could easily check on the health of the charges ensconced within the simple, utilitarian spaces.

The overhead fixtures concentrated illumination into the center of each stall, the broad, sun-kissed bare buttocks prostrated over the prickly yellow straw looking almost pale under the harsh lighting. Some of the Owners had once complained about dim lighting in the stalls, and George very much approved of the remedy for such complaints. A woman in this place wasn’t allowed to hide anything: she was bared to all on the track, in the display stands, and most of all, in the intimacy of her stall.

He’d watched E on the dirt track earlier, her heavy boots pounding the hard-packed soil, the merciless sun baking the ground. Round and round she’d run, the grooms’ whips licking out to lend motivation whenever she’d flagged. Her generous breasts, unfettered, bounced wildly on her chest, the vulnerable globes no doubt throbbing by the time she’d reached the end of her prescribed distance. The larger busts of some of the women never caused the trainers to waver, and E was no different. Sore tits or not, she’d obey the dictates of her trainers — slacking was never tolerated.

The bit must have galled the corners of her mouth, George knew, but it was better to get the creatures acclimated to such use as soon as possible. Being firm with them from the very beginning was the most merciful thing to do when training these women. To coddle them out of the gates was to mislead them as to the real rigors of the life their Owners had sentenced them to. For at this place there was only the running, the lash, and obedience. Everything else was meaningless.

George removed his light coat, hanging it from a hook next to numerous whips, crops and canes. The implements hung along the top of one wall, a silent menace none of the inmates in this place ever failed to notice. He ran his fingers through the lengths of leather, playing with the stiff leather flapper at the end of a well-made crop. Perhaps another time.

Rolling up the sleeves of his starched white shirt, his gaze took in the rounded curves of the female rump. It still bore faint lines from the whips of the grooms, but he was pleased to see they’d not needed to mark her over much. He preferred an unblemished bottom to work upon in case he decided she needed further correction.

His hand stroked over the urgent erection tenting the front of his pants, the throbbing between his legs more insistent by the second. He’d deprived himself of his slave for nearly a week, wanting her to acclimate as best she could to the rhythm of training without the distraction of her Owner. But finally it had been too much, and he’d made his way to the intake facility in Washington, eager to be reunited with his precious Elaina. Though her real name would never be uttered by any of the trainers or the grooms – the diminution of “E” her only allowable designation within the confines of the facility – in the privacy of the stall, things were different. With only her lord and Master as witness, her name could once more be uttered, if only to remind her that she still had one, that it too existed only at the whim of her Owner.

His hands smoothed over the softness of her hip, acquainting itself with her lush flesh once more. The straw rustled as she stirred, her bottom moving against the bale. Her hands, bound wrist to wrist extended straight ahead lengthwise along the bale her body straddled, the cuffs imprisoning her wrists tied off to an eye bolt in the back wall.

His palms eased across the inflamed, whip-scorched buttocks, pausing to squeeze their weight before stroking down the taut thighs spread to either side. The bound woman moaned through the stout black shield gag, his thumbs yawning open the crevice of the buttocks, the harsh light illuminating the moist cleft, the sweat-sodden valley surrounding the bottom hole.

“Shh, that’s a girl. Be still now, Elaina. It’s just me, having a look now.” The plug had stretched the anus slightly, the pink whorl still glistening with a light sheen of lubricant. Nothing she couldn’t handle easily though. He leaned over her, pressing his lips to the curve of a buttock. “How I’ve missed you.”

George inhaled the scent of her exertions, remembering the sidelong glance the head groom Lino had given him when he’d instructed that her sweating, trembling body not be sluiced down with the cool water most of the women were greeted with at the conclusion of a hard, exhausting run.

No, to George, who adored every inch, every
atom
of his slave’s body, such a thing would be to reduce the value of her exertions, and to him, any Owner who couldn’t partake of his slave’s talents in her body’s natural state, who couldn’t enjoy the healthy clean scent of her labors, wasn’t worthy of
being
an Owner. He loved all of her, and took great lengths to show it.

His hand palmed the swollen, sodden folds of the pussy displayed between the splayed thighs, and she sighed as he stroked the heat of her for a moment.

“You ran well today. So well.” He leaned close allowing her to feel the hard erection through the fabric of his pants, reaching under her, raising her up enough to free her breasts from under her body. “It’s time for a reward. Such a good girl, you’ve been.”

Stroking her breasts, he brushed a sheaf of straw from a turgid nipple, his palms luxuriating in the texture the rough straw had lent to the soft skin of her breasts. Working himself loose, he pressed the heavy head of his cock against the moist lips.

“I don’t know how I’ll be able to stand this,” he whispered into her ear, his body laid over hers, his thick cock sinking into the liquid bliss of her cunt. “An entire month without you is much too long.”

As he took up her hips in a strong grip, sounding the full depth of her pussy, her moans rising in urgency, he resolved to enjoy every last second he could steal with her in the waning afternoon.

T
he fog was so impenetrable Derek wondered if he’d even survive the drive up. Off the freeway, and snaking up godforsaken roads into the hills above Goldendale WA, he thought back on the e-mail. His friend Kurt had told Derek when, where, and finally:

‘Ask for a week off, for now. You’ll need it. Bring nothing but yourself — and a healthy appetite.’

Cryptic as fuck, which was standard operating procedure for Kurt. Derek had always wondered what Kurt got up to that one weekend a month. Without fail, the man disappeared — literally — for those two days. National Guard? Survivalist retreat? Civil War reenactments? Derek wanted to know, yet no matter how he questioned Kurt, all he got was a brick wall.

So when Derek got the call on a Sunday evening — a Sunday evening of one of Kurt’s Top Secret Weekends, no less — he thought he’d
finally
get some answers. He just hoped he wouldn’t find out his good friend was a serial killer.

Instead, it was yet more mystery. But Derek was damned if he’d pass up a chance to learn more. It wasn’t as if he’d be sacrificing anything in his social life, which was on life support. What the hell could it hurt?

The road, riddled with so many potholes his truck felt like a fucking bounce house, ended at a heavy steel gate, the kind you often saw rusting away on lonely logging roads. Only this was no logging road. He glanced at his phone again, the glare of the screen filling the cab with its ghostly white light. Assuming the map application wasn’t screwing him, this was the place. He hit Kurt’s speed dial, holding the phone to his head as he wiped the condensation from the driver’s side window.

The Disappeared by Harper, C.J.
Wyatt's Revenge: A Matt Royal Mystery by Griffin, H. Terrell
To the River by Olivia Laing
Crimes of August: A Novel: 5 (Brazilian Literature in Translation Series) by Rubem Fonseca
robert Charrette - Arthur 02 - A King Beneath the Mountain by Robert N. Charrette
Mickey Zucker Reichert - By Chaos Cursed by By Chaos Cursed (v1.0)
Through the Grinder by Cleo Coyle
Gideon by Russell Andrews
And Kill Them All by J. Lee Butts
Daybreak: The Days of Redemption Series, Book One by Shelley Shepard Gray