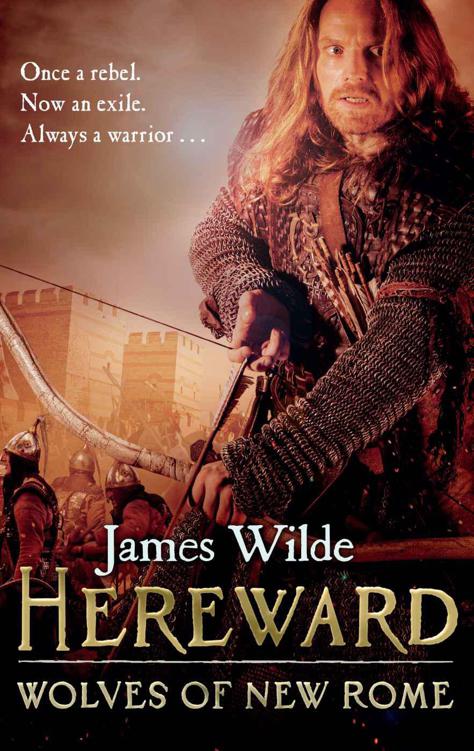 1072. The battle has been lost. The bastard Norman king William is victorious. For the betrayed and abandoned English rebels, the price of their crushing defeat is cruel: exile.

Cut adrift from family, friends and home, their hopes of survival rest with one man, Hereward. But is the legendary hero able to lead his men safely across a world ravaged by war? Their destination is the jewelled heart of the Christian empire in the East, the New Rome – Byzantium. Here the English hope to find gold and glory by joining those pledged to protect the emperor, the elite and savage Varangian Guard.

But this once-mighty empire is slipping into shadow. Beyond the city’s vast walls, the Turkish hordes plan for an attack that could come at any moment, while, within, rival factions threaten bloody mayhem as they scheme to seize the crown.

Here begins a new chapter in the stirring tale of England’s forgotten hero. But now the enemies are hidden, their methods bloodier, the battlefield and weapons unfamiliar. To stay alive in this cauldron of betrayal and murder, Hereward and the English must keep their wits about them and fight as never before . . . 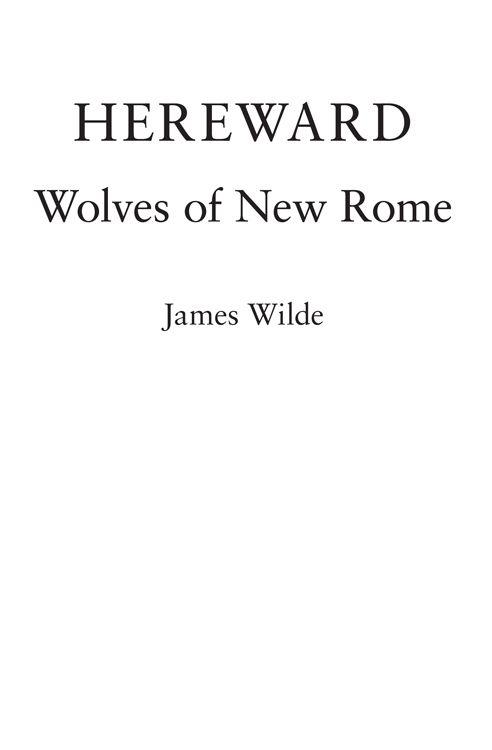 To Elizabeth, Betsy, Joseph and Eve

Palace of Boukoleon, Constantinople, 28 May 1072

When he took the axe-oath in the ringing chamber deep beneath the house of Hormisdas, that had been the first thing Wulfrun was told.

More than honour, more than duty, it was the lesson he had been supposed to take away from that rite. Never rest. Be always vigilant. Death waits for all.

Now, cocking his head, he listened.

As he stood in the shadows at the back of the vast, sunlit hall, Wulfrun felt his heart slow, his breath still. From under heavy lids, he looked up into the golden glow that suffused the chamber. The air here was fragrant. The perfume of the pink mullein flowers tumbling down the white walls of the palace drifted into the hall on the warm breeze. Through the great window, light twinkled across the swell of the Marmara Sea.

Wulfrun looked across the heads of the throng waiting to hear the words of Elias Cephalas, wise counsel to the emperor. Here were representatives of the greatest families in Constantinople. Gold spilled from their coffers. Their lands stretched to the misty horizon. These were the ones who wielded power like a sword, who commanded armies, who controlled the strength of the church, and the cutting tongue of politics.

And here he was, Wulfrun of Barholme. An English dog with the mud of the fens under his nails, now risen to the heights of a captain in the feared Varangian Guard, the emperor’s right arm. Here, in the greatest city on earth, at the heart of an empire that stretched from sea to sea. Aye, he had power too, of a kind. A quiet power. No one would look him in the eye unless bidden. His choice to leave behind England and its miseries had been the right one. Now he could be the man his father had always hoped he would be.

His smile faded, and anger flickered across his face at the loss he had endured. The grief was still raw.

Wulfrun shifted his stance, feeling the comforting weight of the hauberk he wore. His leather breastplate, oiled and scented with sandalwood, creaked as he flexed. Steel vambraces protected his forearms, and on his flank, under his crimson cape, he carried his broad, circular shield, painted red and white with his raven sigil black in the centre. His fingers closed around his long-hafted Dane-axe. As always, he was dressed for battle.

A man cleared his throat and the spell was broken. Across the hall, necks craned as the emperor drifted in.

The slight figure clambered up on to the throne. In the sunlight, his jewelled
loros
gleamed with all the colours of the rainbow. The ruby at the centre of the crown shone, a pool of blood surrounded by gold. Though Michael had seen twenty-one summers, he still had the face of a child. Unlined, cheeks permanently flushed, eyes too wide, too innocent. Wulfrun sensed the crowd’s odd mix of awe and contempt. Did the emperor know that he was so despised? Did he care?

Michael had been seventeen when his father, the old emperor, had died. He was of an age to rule, but even his mother Eudokia had recognized that her son had no interest in politics, no desire for anything but to continue his studies. Yet Eudokia did not want to lose her grip on power and had conspired to establish herself as the young emperor’s regent alongside his uncle John Doukas. Wulfrun turned up his nose. Politics in Constantinople was little more than a pit of snakes. When Eudokia’s fingers had eventually been prised off the throne and she was dispatched to a monastery, the ineffectual emperor was left at the mercy of anyone with ambition, and in this city there was no shortage of that.

Never had there been a worse time for such weak rule, not in all of the empire’s glorious history. Less than a year had passed since that crushing defeat at the battle of Manzikert. The Turkish hordes had decimated the ranks of the professional soldiers from the western and eastern
tagmata
. For centuries, the empire had been feared. Now its authority had been destroyed. The borders could no longer be defended, and the Seljuks moved closer by the day.

War was coming, anyone could see that. Bloodshed the likes of which Constantinople had never known. While the emperor hid away in his chambers, everyone else marched towards doom.

A tall man with burning eyes loomed behind the throne. This was the architect of so much of Constantinople’s misery, Nikephoritzes, the finance minister, the man who held Michael in thrall. Wulfrun narrowed his eyes. He had sworn no oath to protect that viper.

But then Elias Cephalas stepped before the throne. Tall and strong and draped in many layers of the finest embroidered silk, Elias radiated a potency that the emperor lacked. His kin had built their power-base in the green northern lands, and he towered over the imperial court in every way.

Wulfrun eased a path through the crowd, unnoticed by all as they hung upon every word. Would the counsel dare tell the emperor of the sour mood across the city, here, in such a public setting? Elias would dare anything, the warrior decided.

‘A storm sweeps towards us all.’ Elias’ voice boomed off the marble walls. ‘A storm of steel, a storm of blood. And this greatest of empires falls into shadow. We have stayed silent for so long in hope that the fate we all foresee could be averted by strong actions and a will to lead us back into the sun.’ For a moment, he bowed his head as if a heavy sadness weighted his shoulders. ‘’Twas not to be. I can see that now, as can we all. You are too weak.’

A shocked murmur rustled around the chamber. On the throne, Michael leaned forward, frowning. Even then he did not have the strength to speak out in anger.

‘As long as you sit there, always a child, the empire is doomed to fall.’ Elias’ voice hardened. ‘The candle of hope must be lit before the darkness consumes us. There must be an ending … now.’

Steel flashed from the folds of Elias’ tunic. His face twisting in fury, he lunged towards the emperor.

For Wulfrun, the world was calm. His heartbeat was barely a whisper, his features peaceful. The screams that erupted around him were as nothing. The commander stepped forward, and with an effortless swing of his axe he took the counsel’s head.

Blood showered across the imperial court.

Without emotion, Wulfrun watched the shrieking women staring at their red hands in horror, the men reeling in disgust. Never had these cosseted nobles been witness to such slaughter. They were soft, in spirit as well as muscle. They never took up arms, never fought for what they believed in. That was why the army withered and the Varangian Guard was filled with English and Danes, the fiercest warriors in all the world.

Wulfrun could have spared the court this sight. He had known of Elias’ plot for days now. How easy it would have been to drag the snake out of his bed and leave his head upon his doorstep. But a lesson was needed, and here it was.

And it was not yet over.

When he raised his arm, the men under his command flooded through the doors leading into the hall. Helms and hauberks flashed. Silent they were, eyes cold, jaws set. Only the heartbeat of their leather soles upon the flags announced their arrival.

A wave of steel broke upon the crowd. Plunging among the churning, terrified aristocracy, the Varangian Guard swept towards the remaining plotters. Elias’ allies clawed their way towards the doors, crying for mercy. There would be none.

Wulfrun watched, unmoved, as the short swords stabbed. Arcs of ruby droplets shimmered in the shafts of sunlight. Women slipped and fell on the slick, ruddy floor. Men stumbled over them, sprawling. The highest in the city, now stained by the mire of life that they had sought so long to avoid. The captain gave an approving nod.

Finally, the stabbing blades stilled. The Varangian Guard retreated to the edges of the hall, their swords dripping. Wulfrun looked around the scarred faces of his men and saw no emotion. That was good. He raised his left fist, then flexed the fingers forward. The warriors ghosted away into the depths of the palace.

‘You do your duty well, Wulfrun. Once again I owe you my life.’

The captain turned at the sound of the reedy voice. Someone had handed a cloth to the emperor and he was dabbing at the splatters on his tunic. Wulfrun bowed his head. Michael forced a wan smile as Nikephoritzes took his arm and guided him out of the chamber.

Lessons had been learned here, the commander thought, but none by those who most needed them.

Stepping over the bodies littering the crimson lake, the captain marched past the ashen aristocrats without giving them a second glance. Outside the door, he inhaled a familiar fragrance, as sweet as those flowers cascading down the palace walls. He saw her, half hidden in the shadows of the entrance to an antechamber. With a sweet smile, Juliana Nepa beckoned to him. She fairly glowed in the half-light, her fine dress the colour of amber, her blonde hair covered by an ivory headcloth. On her breast was the gold brooch, the token he had given her months before.