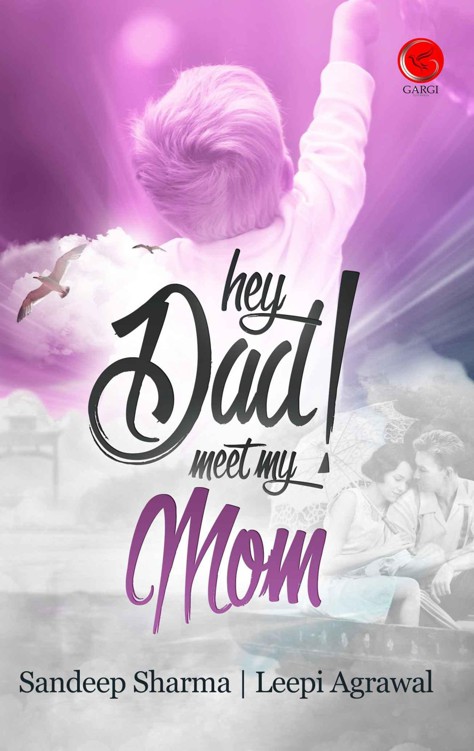 Sandeep Sharma
(21), a dreamer from Agra, the city of love and the Taj Mahal, is currently in his final year pursuing B. Tech (Civil Engineering) from JSS Academy of Technical Education, Noida. He is very passionate about writing and has been writing short stories for a personal blog since 5 years. He has also co-founded
‘The Author’s Blog’
which is a kind of a platform which tries to bridge the gap between authors and readers. He is an avid reader and loves to review books on his blog. He has been previously associated with many anthologies as a contributing author.

He can be contacted at:

It is said that books are a person’s best friend, so
Leepi Agrawal
started spending her time with this special friend who then led her to write stories and poems at an early age. The Times of India gave wing to her writing by publishing her works in their esteemed newspaper. Leepi is an “Ahmadavadi Chokri” filled with zest and always strives to mark her work with perfection. She is a final year student and a gold medallist for her academic excellence in Masters of Computer Applications at Indus University, Ahmedabad. She has won the TechFest in April 2014 at college and state level. As writing is her passion, she loves to roam in the “gallis of Ahmedabad” so that she can explore more about her birthplace through writings. Apart from the previous successes of her short-stories, now even one of her poems has been acclaimed on an international platform. She is quite obsessed with writing, wires and machines and subsequently her obsession has turned into her passion and profession.

She can be contacted at:- 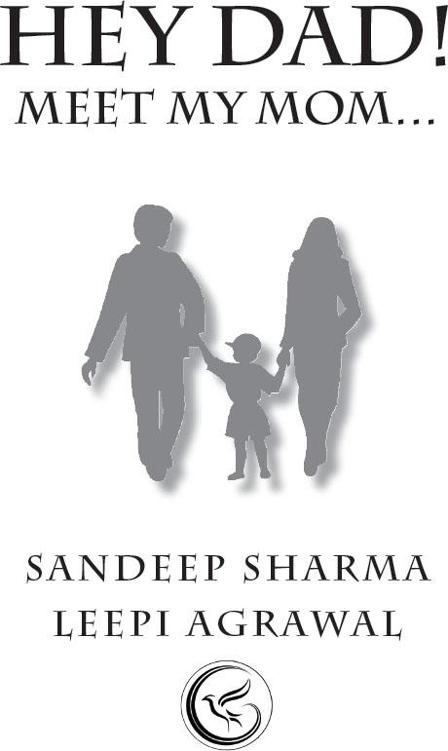 First published by Gargi Publishers in 2015

All characters in this book are fictitious, and any resemblance to real persons, living or dead, is coincidental.

All rights reserved by the Author. No part of this publication may be reproduced, stored in a retrieval system, or transmitted, in any form or by any means, electronic, mechanical, photocopying, recording or otherwise, without the prior written permission of the Author and Publisher.

This is for all those dreamers on whom the
world laughs. Here’s giving them another reason
to work harder.

‘Hey Dad! Meet My Mom!’ was a fascinating journey for us. We had no idea what we were heading towards and what the outcome would be, but now after we have completed the book, it does soothe our inner souls that we finally did it. We would like to grab this opportunity and try to convey our thanks to people who saw the dream of HDM3 with us.

Firstly I want to thank my sister, Deepshikha Sharma, who was the first one to see a potential writer living inside me. I will always be grateful to God for giving me such a sweet elder sister and on the other hand, I’ll always fight with Him for having taken her away from me. Next, I would like to thank my parents who support me and try to help me in every possible way to achieve the only dream I have for my life.

Now I would like to thank Kavita Sharma (Pinky), my sister, for being the first reader of the first draft and conversing with me for very long about the climax; thank you sis, for being the top admirer of my writing. Another important person I’d like to thank is my buddy, Shubham Kumar (Danger DX); you are the one who always keeps me on my toes at working hard. Keep on doing that buddy!

Another very important person to be thanked is Payal Srivastava. She has written beautiful poetry for HDM3 and has provided soul to our novel. Thank you for your sweet and kind effort. I would also like to thank Ashi Mittal and Shiv Kumar Sharma (Mamaji) for pulling the script out of its rough draft.

Now I wish to mention some names of people who mentored me through the journey of my writing; Mallika Nawal (Author of ‘I am a woman & I am on Sale’), Vishwas Mudagal (Author of ‘Losing My Religion’) and Shomprakash Sinha Roy (Author of ‘Life served hot’). Thank you for always being there to help.

And last but not the least, Pulkit Gupta, my publisher. He, through his team of Gargi Publishers, is the one who helped by turning a mediocre manuscript into a masterpiece. I would like to thank Gargi Sarkhel Bagchi who worked pretty hard on editing to make it free from errors and also Jimmy Eric for providing a fabulous cover.

In the end, I want to thank all my friends who kept on helping me in numerous direct or indirect ways and helped me grow as a dreamer and also work hard to achieve the dreams.

Acknowledgement is a space to thank those people who are actually an important part of your life and dreams. When we dreamt of HDM3, they were the ones who made this dream come true with open eyes.

So, firstly it’s my parents Shri Satyanarayan Agrawal and Smt Jayshree Agrawal who understood my passion along with my profession; closely followed by Mihir Agrawal -- the man behind my success. Secondly, I would like to thank the mentors of my passion and profession. Shri Ivan Reubens (Director of Reubs Higher Secondary School), who was actually the one who inspired me to write. Also Lt. Fr. Shri Kulandai Raj (Ex-Director of Xaviers Institute of Computer Applications). Though today he is not present to read this gratitude, I will be always thankful to him, because it’s all due to him that I am pursuing my education in the field of computers. Shri Tejas Suthar, a true mentor who has always helped me since I was in SSC. He was the one who created the base for building strong pillars in the world of IT.

Next in line is my university, The Indus University. It’s the only place from where the journey of getting published begins.

Last but not the least; I am thankful to Ashish Sharma who guided me on tactics of how to deal with people with calm and composure.

“Do you know what the best thing about you is?” I asked her while lying on her lap. We were naked, exhausted and very happy.

“What?” Roshni said. Her wildness was slowly transforming into cuteness. She was a lady of various colors.

“It’s the language of your body. It speaks to me and asks to explore every part of it again and again and again.” I ran my finger from her neck to navel and transformed her into a tigress once again.

Suddenly everything faded like it had never existed and at that very moment I understood that I was dreaming. A white color filled the space around me. Everything was bright, very bright but still bearable for the eyes.

I knew that at any moment, Rishi would pop up from somewhere in front of my eyes. I waited, I called out his name; but he didn’t appear. Then suddenly, I felt like I was falling; I was falling as though from high in the sky. The feeling was so real that I couldn’t stop myself from screaming. I could see the hard concrete floor waiting to hurt me the very moment I would hit it. I knew it was all a dream but still, that feeling took my breath away for a moment.

I was about to hit........ 5... 4.... 3.... I closed my eyes in fear. Waited for the ‘crash’-moment but nothing happened. I opened my eyes and saw Rishi standing in front of me; pale and expressionless. I wanted to ask him many things but words weren’t coming out of my mouth. It was as if someone had taken control of my mind and ordered it to shut down. The next urge which grew within me was to look around; to look at the place around me. It wasn’t my will to look but it was like someone was ordering me and controlling my actions.

I looked around, it all looked familiar. I had seen this place before, in another dream. Yes, it was a railway station in Ahmedabad. But what was here? Why was this place so important, that it kept coming in my dreams again and again? Rishi really wanted to show me something here.

How can the world be kind and unjust at the same time?
It can compel you to exist and kill like a bewildered mime,
My soul prods me to investigate my conceded past,
But my body is tired of wandering and wants peace at last.

“Are you gay, Puneet
beta?”

No son belonging to this part of the country could expect his mother to ask him this question. After hearing this, I experienced for the very first time what real embarrassment meant!

My mother, Mrs. Bina Shrivastava, could be termed as a perfect housewife of modern India. Once a stunning beauty (though rarely admitted by my father), she had now stepped into her late forties and with this age, came many life partners like diabetes, obesity, cholesterol, etc. Her life was divided into four different areas: her late husband Mr. Rajeev Shrivastava’s remembrance, her son (that was obviously me), her television series and most importantly -- the colony gossip. She was like a local news reporter for us.

Now getting back to the subject! The question really struck me a great deal and there were two matters which were passing in my head. First, that this conversation had reached its highest level and this degree was truly awkward, but if I came out of it, there was a fairly good chance that my opinion about marriage could win and the other one was ‘How the hell does she even know about gays?’

She wanted answers, but she was afraid to hear and I was embarrassed to say anything. Either one of us had to break the barrier. Finally, I took the step. “No Mom! I am absolutely fine.”

“Then why don’t you want to marry? You earn well, you are comfortably settled and most importantly, you are 29 now.” She blurted out everything she had in her head.

Well, this was not the first time I was having this conversation with my mother but still, even now, I found myself totally stuck.

“Mom, as I have told you several times earlier, I am not against marriage. I am just against “arranged marriage”. I am just 29, let me build my career, let me achieve my goals.” Then I realized that she was not interested in hearing about my vocation. This was a really strange thing, till the day, you didn’t get a job, everyone forced you to focus on your career and when you finally bagged a job, those people tried to divert your thoughts from the very same thing. ‘Getting employed is different from achieving career goals’, who was going to tell them that?

I saw my mom’s eyes, she was on the verge of bursting into tears, an emotional drama was about to begin. Instantly I seized her shoulders and said, “I will marry mom, I am just waiting for a perfect daughter-in-law for you. The day my search is over, I’ll let you know. But grant me a little more time.” She embraced me and I held her close.

Unscrewed by Lois Greiman
Cloudland by Lisa Gorton
More Than Great Riches by Jan Washburn
The Darkness of Wallis Simpson by Rose Tremain
A Shard of Sun by Jess E. Owen
Loose Connections by Rosemary Hayes
Lover of My Dreams by Lynnette Bernard
The Religious Body by Catherine Aird
My One And Only by MacKenzie Taylor
The Gas Giant by H. Badger