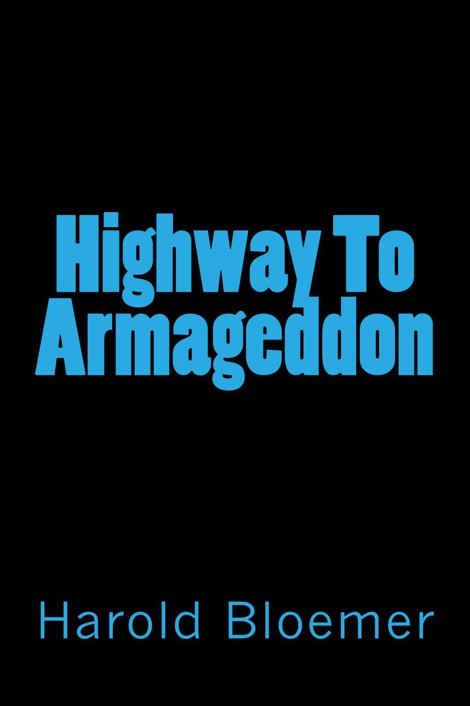 “Lance, what the hell are you doing?”

I glance at Krystal. She has her hands on her pudgy hips and impatiently taps
her right foot. I can’t help but notice all the bullet holes running up and
down her Kevlar vest.

“What do you mean what am I doing?”

Krystal narrows her beady brown eyes. “Don’t do that, acting like I’m stupid.
You were staring off into space.”

Yeah, I tend to do that a lot. When you’re in Hell, it helps to day-dream.

“We got a mission to do. You
do
want to pay for this month’s rent,
right?”

“No, I want my cousins to get evicted from the Sanctuary so they can be raped
and killed by bandits.”

Krystal punches my shoulder. “Don’t get smart with me.”

“Sorry,” I mutter. I learned long ago it was better to apologize to Krystal
than start up an argument. I’ve seen her kill a man with her bare, manicured
hands. She isn’t someone to mess with.

Krystal whips out her sunglasses and presses a button on the side. A few people
in the bread line give us funny looks. I can’t blame them. It’s cloudy and
drizzling. They’re probably wondering why we’re wearing sunglasses. They’re
also probably wondering why we’re armed with guns, tasers, knives, tear gas
canisters, handcuffs, and grenades. We have so many weapons hanging from our
belts and strapped to our backs that we sag under the weight.

Krystal spends several minutes scanning the faces of all the people in line.
It’s a time-consuming task. This is one of the busiest bread lines in
Cincinnati. 30,000 people come here everyday.

Krystal sighs. “I don’t see him. Are you sure he’s here?”

“Why are you asking me? You’re the one who dangled his mother from a bridge and
threatened to drop her unless she gave him up.”

Krystal sticks out her bottom lip. “Don’t act all high and mighty. If it wasn’t
for me doing all the dirty work, we’d never catch any of these thugs.”

Krystal turns back to the line, which snakes around the block and goes on for
miles. “The crazy old broad must’ve lied to us. She said he came here every
evening at 5:00. I knew I should’ve dropped her.”

I nudge Krystal in her side. “You see that old woman over on the left?”

Krystal nods. When you’ve worked together as long as Krystal and I have, you
pretty much have a psychic bond. We bicker a lot, but when it comes time to
catch a crook, we don’t have to say a word.

Krystal and I slowly make our way toward the ‘old woman’, who has just left the
line with half a loaf of moldy-looking bread. The ‘woman’ has her back turned
to us, but she must sense we’re coming because she suddenly takes off at a full
sprint.

“Ah hell, I do not feel like running today,” Krystal groans as we take off
after our target.

The ‘old woman’ tears off her robe and wig, revealing a grungy man underneath.
The man turns around for the briefest of moments. I’m ready. As soon as I catch
a glimpse of his face, my sunglasses project a transparent image in front of my
eyeballs. A picture of Theodore Maxwell materializes, and a computerized voice
inside my head says,
“Perfect Match. Theodore Maxwell, age 47, five-foot
eleven-inches and 155 pounds. Wanted for the attempted assassination of
Cincinnati Mayor Johnny Jackson. Bounty is currently $100,000. Proceed with
caution.”

“It’s
definitely him,” I shout over my shoulder.

Theodore spins around and fires off several shots. Krystal and I duck for cover
as bullets whiz past our heads. People on the street scatter like cockroaches
exposed to daylight.

I pull out my gun. “Maybe shooting him isn’t such a bad idea.”

We take off after Max, who has just entered a crowded marketplace. Krystal and
I try not to knock people over, but at times we can’t help it. I feel horrible
about knocking over an elderly woman, and I’m sure Krystal feels bad about
knocking a little kid into a puddle. At least, I hope she does.

We’re starting to gain on Maxwell, and he knows it. Out of desperation he
knocks over food carts. Apples and oranges roll toward us, causing us to
stumble. I glance back to find Krystal chomping on one of the apples.

We finally exit the marketplace and enter a dark alley. I hear Maxwell’s feet
pounding the pavement, but I can’t see him. Krystal grabs the back of my shirt
and yanks me backwards.

Gasping for air, Krystal says, “That alley is a dead end, fool. We’re running
into a trap.”

I click a button on my sunglasses, and a map of the area pops in front of me. I
press the button a few more times, narrowing the search parameters until the
map shows me the alley. Krystal’s right, the alley is a dead end.

I notice several dirty children huddled in front of an abandoned building.
Krystal must see them, too, because she puts her hand into her pocket and pulls
out several gold coins. Still looking at me, she flips the coins over to the
orphans, who squeal with joy. I can’t help but crack a grin. Krystal likes to
act like a badass, but deep down inside she has a huge heart.

“There went the rest of my money,” she says with a sigh. “Now we have no choice
but to go after the asshole.”

Krystal and I activate the night-vision function on our goggles. It’s still
daylight out, but the alley is so dark it would make a blind person feel right
at home.

We cautiously enter the alley with our guns drawn. I scan the left side and
Krystal scans the right. The alley is narrow, but we still manage to walk
side-by-side.

I eventually come across a wooden door that’s propped open just a crack. I tap
Krystal on her shoulder and point. She nods and mouths, “Do it.”

I unhook a flash bomb from my belt, kick open the door, and throw it inside. A
split-second light, a blinding flash of light illuminates the entire alley. Krystal
follows up by tossing in a smoke bomb. We both jump back and wait for our prey.
I’m shocked when four young children stumble out, coughing and gagging. The
kids are soon followed by Maxwell.

Krystal shoves the kids out of the way, grabs Maxwell by his long, dirty hair,
and bangs him against the wall.

“You’re under arrest, sucker! You have the right to get your ass kicked if you
so much as make a peep!”

Krystal seriously watches too much 21
st
century television.
Apparently back in the day you were supposed to recite something called “The
Miranda” to criminals when you arrested them. Nowadays criminals were lucky
they weren’t shot in the head.

Max tries to brush Krystal’s hands away. Krystal knees him in the stomach.

“Don’t touch me, fool! I don’t want your cooties!”

Krystal snarls. “You always gotta take the fun out of this, don’t you?”

Krystal bangs Max’s head against the wall a fifth time. “Shut up! We know you
tried to kill Mayor Jackson! Now I can’t really blame you. The guy’s an idiot.
But we can’t be having unhappy voters whacking their elected officials all the
time, can we?”

I just realize the four kids who stumbled out with Max are standing uncomfortably
close to us. They have their arms crossed, and their eyes are narrowed into
hateful slits.

Krystal bangs Max up against the wall a sixth time. “Now we know you didn’t act
alone. You’re too damn stupid to pull off an assassination attempt. I can tell
just by looking at you. Who are you working for? Are you in cahoots with that
slimeball Caesar Dominguez?”

Krystal slams him a seventh time. “Don’t lie to me!”

I glance around and notice the four kids have inched even closer. And they’re
not alone. Another six scraggy looking kids enter the alley. They’re holding
bats and metal pipes. I recognize two of the kids immediately. They’re the ones
we gave money to.

Krystal slams Max an
eighth
time. “You are with Caesar, aren’t you? He’s
behind all these political assassinations, isn’t he?”

Krystal slams Max a
ninth
time. “A-ha! You just admitted you were behind
the assassination attempt!”

I ignore the kids for a second and quietly admire Krystal’s brilliant
interrogation tactics. She can get anyone to admit to anything.

Krystal slams him against the wall a
tenth
time. “What did I say about
lying?”

I glance around again and feel my face turn white. The kids in the alley have
doubled in numbers. And they’re inching closer with each passing second.

I hear quiet mumbling and look up. Dozens of other scraggy looking kids
line the rooftops towering over the alley. But these kids aren’t armed with
bats and pipes. They’re holding stun guns, swords, and rifles.

Krystal shrugs out of my grasp and slams Max up against the wall an
eleventh
time. “Quit bothering me, Lance. I got this scumbag right where I want
him.”

“I think it’s the other way around.”

Krystal turns around and narrows her beady little eyes. “What do you mean?”

I gesture to the dozens of heavily-armed orphans surrounding us on all sides.

“I think
Max
has us right where
he
wants us.”

Krystal’s dark face turns almost as white as mine.

The kids down in the alley continue closing in on us. The ones up on the
rooftops keep their weapons aimed at our heads.

We turn to find Max grinning like a sadistic madman. His teeth are yellow and
crooked and have food chunks stuck in them.