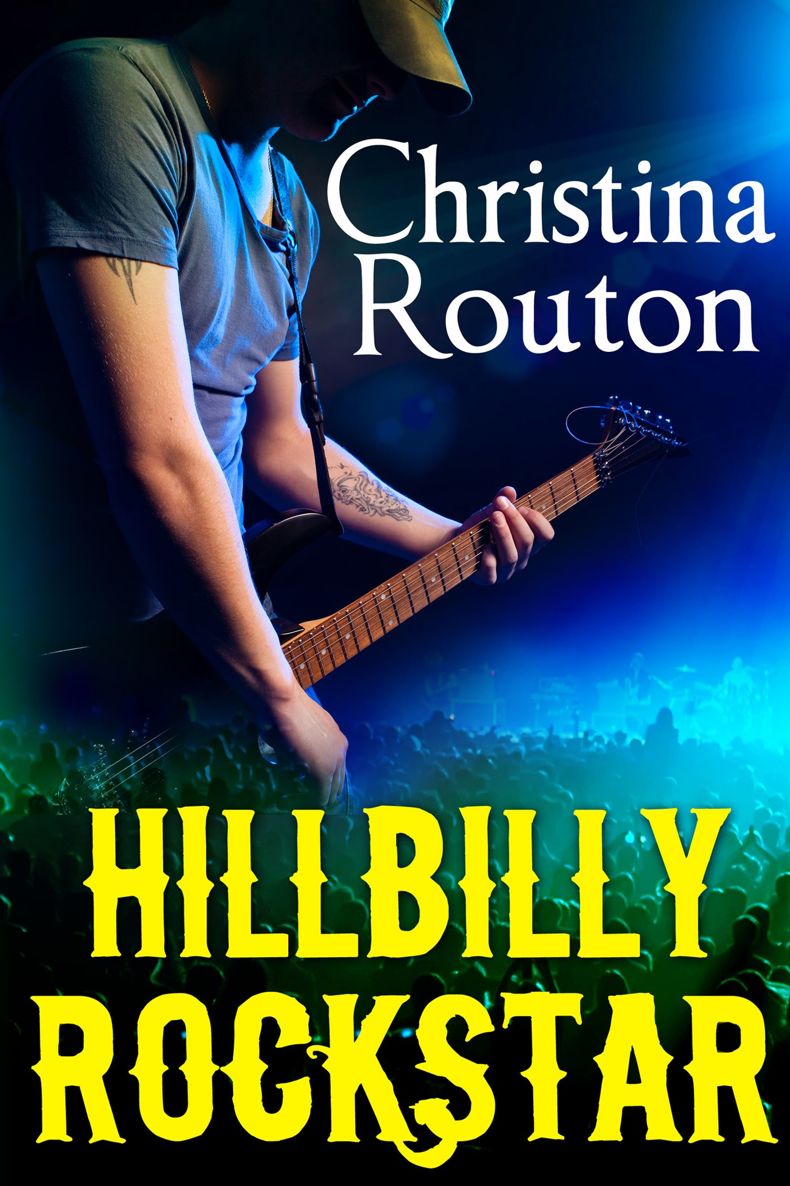 This ebook is licensed for your personal enjoyment only. This ebook may not be re-sold or given away to other people. If you would like to share this book with another person, please purchase an additional copy for each recipient. If you’re reading this book and did not purchase it, or it was not purchased for your use only, then please return and purchase your own copy. Thank you for respecting the hard work of this author.

A Message from the Author

Thank you very much for your purchase. I appreciate it very much. If you enjoy the stories, please
send me an email
and introduce yourself. I love hearing from all of my readers. You can also visit my blog and subscribe to the RSS feed so you'll never miss a post.

For more about the author visit
Christina Routon Writes

Lisa
roamed the large house nestled within a cul-de-sac in the affluent Brentwood, Tennessee, suburb outside Nashville. The four bedroom brick home was Charlie's pride and joy, she knew. Charlie left a legacy -- A beautiful home, a beautiful family, a beautiful life. She would miss him. Lisa smoothed her dress as she walked down the picture-lined hallway into the cavernous living room, weaving her way through the crowd toward Charlie's widow.

"I know, me either." Lisa hugged her. "It won't be the same at the office without him."

"Thank you so much for coming, Lisa."

"Julie, you know I'd do anything for you and Charlie. He wasn't just my boss. He was my mentor and my friend."

"Charlie thought the world of you."

"I thought the world of him too, Julie. I'll miss him."

Lisa saw tears gathering in Julie Cahill's blue eyes, like a dam about to burst. She opened her mouth to speak, but a choked sob replaced her words. Instead of speaking, Julie patted Lisa's hand.

"Lisa, could you help in the kitchen a second? We need more cold cuts on the table." Maggie, Charlie and Julie's daughter, had walked up behind them while Lisa and her mother spoke.

Lisa walked away, leaving Julie in Maggie's capable hands. She headed through a large, square-cut archway and into the modern kitchen Charlie had renovated the previous year.

Lisa found the containers of cold cuts in the giant sub-zero refrigerator and began layering them on an empty platter. Movement caught her eye and she noticed her friend, Tanya, enter the kitchen.

"Tanya, can you help me? Maggie asked me to get these cold cuts put out. I think I'll put out more fruit too."

"Lisa, you need to talk to Mr. Waters about the job."

"What job?" Lisa continued to arrange food on the platter.

Lisa looked over at her friend, bewildered. "Tanya, we're at Charlie's funeral. I'm not about to speak to his business partner about replacing him right now. Charlie was my friend and I won't do that."

"I heard him say he's looking for someone already. He'll probably have someone in Charlie's office by the end of the week."

"That's his right as the current owner of the business. But right now I need you to help me get these trays into the living room."

Lisa picked up the cold cuts, Tanya the fruit, and they carried the trays down the hall, Lisa being careful not to snag the heel of her black boots on the carpet runners. They placed the trays on the white-covered table in the corner.

"Patrick, who's that?" Trace Harper pushed his black hat back to get a better look at the blonde in the black dress and boots setting out a food platter. "Do you know her?"

His agent, Patrick Mitchell, looked up from his cell phone, pausing as he typed in a text one-handed and grabbing a snifter of brandy from a passing server with the other. "Who?"

"Her, the blonde in the black dress and boots, near the redhead." Trace grabbed a snifter of his own and pointed.

"Her name is Lisa Jenkins. She's a colleague of Charlie's." Patrick lifted his glass. "To Charlie," he toasted, and took a drink.

"To Charlie," Traced repeated, remembering the man --the friend -- who had managed his career for fifteen years. Trace sipped the brandy and the alcohol slid down his throat, easy as ice water. This was good stuff. He preferred beer, but Trace never turned down a drink from Charlie's excellent stock. He watched the blonde, took another sip, made a decision.

"Trace, we're at a funeral. You don't pick up women at a funeral. Besides, we need to leave soon. I have a schedule to keep and I wanted to discuss an offer that came in yesterday."

"I'm not picking her up, I'm going to say hi. I told you, I don't want to see any offers right now. I'm performing locally and that's all I want to do." Trace set his glass on a nearby table.

"This is an excellent offer, Trace. Six figures and television promotion."

"I don't care, Patrick." Trace turned back, started to move, but the blonde and her friend were gone. "Damn, where'd she go?"

"Trace, we've been here an hour. Let's give our respects to Charlie's widow and get out of here. I don't do well at funerals."

Trace took another look around the large room filled with people. He saw Charlie's friends, family, clients, but not Lisa Jenkins.

The men made their way further into the living room where Julie Cahill sat, Maggie by her side, to pay their respects.

Lisa gathered a notepad and pen for the nine o'clock Monday morning staff meeting and made her way to the conference room. She looked around the office they'd shared. Since he'd passed, it felt different -- empty -- without his presence. She missed his smile, his laugh, his jovial mood.

Lisa walked to his desk, touched the hardwood top, now bare of papers and file and notes. Charlie had taught her so much. He'd believed she was ready for the next step, and had told her so, just a week before he'd died.

"Thanks, Charlie," she whispered into the air. "You believed I was ready for a promotion, and I promise to do my best. I'll talk to Mr. Waters today."

She touched his desk once more before walking down the hall to the conference room.

Lisa entered the room first, followed by the rest of Cahill-Waters Management staff. Some were joking, some discussing business. Lisa sat near the end of the table and counted off staff as they entered -- four client managers, two more secretaries, and Ellen, the receptionist. Everyone took a seat and the chatter died down, the mood become more subdued. With the funeral over, the unknown future of the company seemed like a heavy weight dragging the group down.

Boyd Waters entered the room and everything -- fidgeting, talking, checking text messages -- stopped. All eyes turned toward him, expectant. Lisa glanced around the table, feeling the mood shift. She sat next to Jill, one of the other secretaries, and swore the woman's skin was now pale white with a faint green tinge. Boyd took a seat at the head of the large, rectangular table, his presence seeming to suck all the air from the room. This was it. I bet he couldn't wait to get his hands on this business and change everything.

"We lost a good man in Charlie," he began, not wasting time. "He was my business partner and friend for over twenty years. He had an intuitive gift for discerning talent, and he found amazing talent throughout Nashville and the southeast. If it hadn't been for Charlie, we wouldn't have some of the country music performers we have today." He paused, narrowed his eyes and scanned the room, his gaze lingering on each staff member like Terminator running a program detailing their current status. "Charlie was a great manager, but not a great businessman. He kept on some clients and employees a lot longer than was wise."

Boyd rose from his seat and opened the leather binder he'd carried into the meeting with him, removing two checks and two letters on company letterhead.

"Thank you, gentlemen, for the time you've worked here. I appreciate the fifty hours of client time you've billed over the past month. It must have been hard fitting in meetings with clients and agents, working out promotion plans, and scouting new talent in between games on Facebook." Boyd walked around the table, placing a letter and a check in front of each man. "This is your contracted severance pay and your letter of dismissal. Please clean out your desks and leave the premises. Security will escort you out."

The two men sat still, not sure what to do. The rest of the staff sat up straighter, eyes darting around the table, hands twisting. Lisa could hear the unanswered question running through everyone's mind -- am I next? But she refused to feel the growing sense of fear in the room. No, she wasn't afraid. Lisa was furious.

You did not fire people this way, in front of co-workers. Charlie wouldn't have stood for it. She seethed inside, feeling anger, frustration, heat, rushing over her. She hadn't liked Boyd Waters when she'd started working for the company six years ago, but at this moment she hated him.

"Gentlemen, please leave. We have a staff meeting to finish." Boyd returned to the head of the table, his large frame spilling from the chair like an overstuffed burrito in a business suit. The two men rose, walked away from the table like robots obeying orders, or zombies not quite sure what happened to them or why. They left the room, not speaking, and never looked back at their co-workers.

"Now, that's been handled." He made a check on a paper in his binder, and Lisa realized he'd made to-do list, starting with firing the two managers. He was making a point, letting everyone know that this was his company now.

"Next on the agenda is the restructuring of the client list. Until we hire another manager I've taken the liberty of reassigning clients." He passed lists of names to the remaining managers.

"I don't know if these were divided up evenly, Mr. Waters." Larry, the senior manager said, looking over the list. "There should be more if you're dividing up Charlie's clients along with Sam's and Andy's."

"Some of the talent that Charlie represented, especially those he'd represented for many years, is no longer working or they've become stagnant. Others are causing issues with public relations. Those clients are being dropped. They'll be notified this week. Taking them into account, you'll see the division is more than fair."

Lisa felt anger rising from the pit of her stomach, like flames from smoldering coals. Now he was firing clients? How did the man expect the business to stay afloat? He was ruining the business Charlie had built from the ground up, relationship by relationship.

"Now, as far as the rest of the office staff, you'll all stay at your current positions for now." As he glanced down at his binder again, the rest of the staff darted looks around the table. Lisa had had enough.

"Yes, Lisa, I heard you. I was getting to your position, if you would give me a moment to check my agenda." He kept his eyes lowered, making checks with a quick swish of his pen.