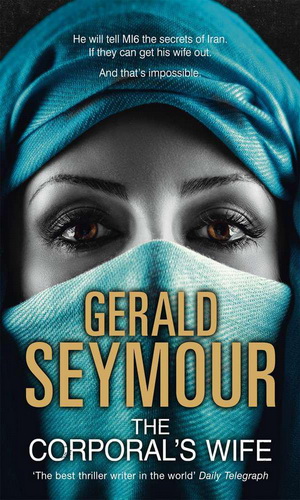 This is the moment that MI6 has been working for: an Iranian caught in a ‘honey trap’ and flown to a safe house for interrogation. He may only be a Corporal in the Revolutionary Guard, but as chauffeur to a top general, he knows the location of secret nuclear and military sites and often overhears unguarded conversations in the car. It’s a coup to put the Brits one up on the Americans and Israelis. But the Corporal won’t talk unless they bring his wife out of Iran, too. So the SAS are asked to find the woman and smuggle her out of Tehran – but they turn it down as an impossible risk. Which is how three former soldiers hired from a London agency and Zach Bennett, a university drop-out recruited for his Persian language skills, find themselves about to cross the world’s most dangerous frontier on a mission that will mean certain death if they are caught. And the Corporal’s wife is not the kind of person they were expecting. In fact, the fiery, independent, beautiful Farideh is not like anyone Zach Bennett has ever met in his life. THE CORPORAL’S WIFE is an epic, nail-biting story of courage and betrayal, a brilliant glimpse into a closed society and the way the secret services operate on both sides of the line between politics and morality.

Work has been asserted by him in accordance with

the Copyright, Designs and Patents Act 1988.

to real persons, living or dead, is purely coincidental.

He was already awake.

He heard the footsteps in the corridor, the clanging of the doors as the bolts were pulled back, the whimpering cry of one man, then the shout, anguished, of a second.

He had not slept. In the last hours, segments of his life had slipped by in his mind – picked up, discarded, lost – and those were the good times, with his parents up in the villa on the north side of the city, and when he had roamed in the foothills above his home with his brother and cousins . . . And there had been the times when his behaviour had hurt those he cared for. There were fleeting thoughts of where they were now, whether they knew what would be done to him that morning, whether they prayed or wept or sat silent, numbed, and held hands, or were in ignorance and still asleep. He had thought of them, and his friends. In the hours before they came, he had squatted in the corner of the bright-lit cell, facing the door, his back against the angle of two walls, and thought of her.

He was Johnny. It wasn’t the name given him at birth, and didn’t come from his society or its culture. Before he had dropped out of the university, second year, bored and chafing at its restraints, some had said he resembled the actor Johnny Depp, and it had stuck. He was Johnny now to all who knew him – even the people who brought his food, who had interrogated him and tortured him with beatings and pliers. He was Johnny to her. He had taken comfort during the night from thinking of her. He had not spoken her name in all the weeks since his arrest: if he had, he would have condemned her.

He had a photograph. He held it as the footsteps came closer. He doubted he would look at it again but took a moment to gaze down at it now and hoped it would stay in his memory to the last.

He held it in his palm and saw the tremor, not a shake, which pleased him, and the scarred fingertips from which the nails had been pulled. The photograph was from a booth that supplied passport-sized pictures. The black
chador
covered her shoulders and hair; a veil hid her nose and mouth. Johnny had done international literature at the university. He knew of a Dr Samuel Johnson and also of that man’s remark: ‘When a man knows he is to be hanged in a fortnight, it concentrates his mind wonderfully’. He could see her eyes, the small brown mole at the extremity of the right one; he recognised the defiance that blazed in them – and the mischief. It was to protect her that he had insisted the photograph should show her in ‘good
hijab
’, so that she would be unrecognisable to investigators. Her eyes were a soft blue.

He had guarded the photograph from the time of his arrest, through several cell moves, courts and interrogation rooms . . . and when they had brought him to the wing housing those awaiting execution. It had been rolled tight or crumpled close, a scrap in the pocket of the jeans he wore now and that he had worn when he was taken. He had created the fun, and the light, in her eyes, which had been captured by the booth’s lens. When she had met him, it had been months, years, since she had laughed or giggled . . . Once, the photograph had been seized by a ‘trusty’ prisoner, who had come to escort him from one block to another. The man had glanced at it, then thrown it down as valueless.

He smoothed it, drank in the strength of the eyes – wondered where she was, what she was doing, whether her husband was in bed beside her or away. Those who knew Johnny, and recognised him as an agitator, a coke-taker, addicted to alcohol, an activist, would have found it difficult to believe that a married woman, living close to the bazaar and from a background he would hardly have known, could captivate him. He pushed himself up and faced the door.

He screwed up the photograph, made a tiny ball of it. It was in his left hand, his fist clenched round it.

The bolt scraped. The noises – fear and shock – of the two men to be executed with him were louder.

The guards came around him. His arms were pulled behind his back and thongs were wrapped tightly round his wrists, then fastened. It hurt, but pain was of little importance to him now. He walked, didn’t allow them to push or drag him, through the door. He looked into the faces of the other two men. He didn’t know whether they were political opponents of the regime or drug-traffickers, rapists or murderers. He saw slack mouths, glazed eyes, sunken chins, shaking shoulders. He heard their muted terror.

Softly, Johnny said, ‘Don’t let them see your fear or they’ll have won.’

He took his place at the front. There was a nudge at his elbow, and he started for the end of the corridor. He could feel, against the softer skin in the palm of his left hand, the screwed-up paper that was her picture, little bigger than an orange pip. They went briskly, and he set the pace.

At the end of the corridor there was a grille of wrought-iron bars. It was opened noisily. Three times, since Johnny had been transferred to the block, he had heard others taken out at dawn. Some had been brave; others had screamed and struggled; a few had been in a state of collapse and were dragged. He walked briskly.

The gate closed behind them.

In the lobby beyond, his interrogator waited. He was a stout man, with a seemingly permanent cold sore beside his mouth and breath that stank of chillies. He had always looked away when Johnny was whipped with the cables and when the pliers wrenched off his fingernails. Johnny had wondered whether the interrogator – after a hard day inflicting pain in the name of the regime – went home and played with his children, then made love to his wife, or if he sat alone in his living room as the darkness closed round him, hearing screams and seeing blood. He tilted his head, looked the man in the face and sneered. The interrogator didn’t know about the woman Johnny had, briefly, loved. That was a triumph.

There were no other interrogators in the lobby, which told him that the other two men were classified as criminals: they had not been convicted of
mohareb
– making war against God and His Prophet – the offence of which Johnny had been found guilty. His interrogator caught his glance, would have expected him to look away, but he did not. It was the interrogator who broke the contact. Good. Johnny walked on. He knew the route.

They went out into the faint first stirrings of dawn. He could see the shape of the mountains in front of him, and from the east part of the sun was visible. Against it were the gallows, the nooses and shadows that fell from them.

He held her picture and remembered her. There had been a riot: he and thousands had protested the theft of their votes; an idiot had been re-elected by fraud, and the paramilitary
basij
had come to break up the crowds shouting and chanting for the end of the regime. The
basij
had fired gas and charged with batons. She had come round a corner and been too confused to run. The
basij
had caught her and beaten her, then had been driven back by volleys of stones. He had found her as she cowered on the pavement. He had seen her beauty and swept her up in his arms.

The garage had been close by, and he had taken her there. After the shock and terror, he had discovered mischief in her eyes, and loathing. He had a room over the workshop, where two old men repaired motorcycles and scooters. Their love had lasted just over a month before he had been taken. She was married, and wore a ring, thin gold: they ignored it. Neither of them mentioned her husband: not his name, his place of work, or why she was betraying her marriage vows. Twice during that month he had had a day off work. On one they had spent longer in the room above the garage, and on the other they had had time to ride out of the city on his scooter – the day the photograph had been taken in the booth at a petrol station. Precious hours.