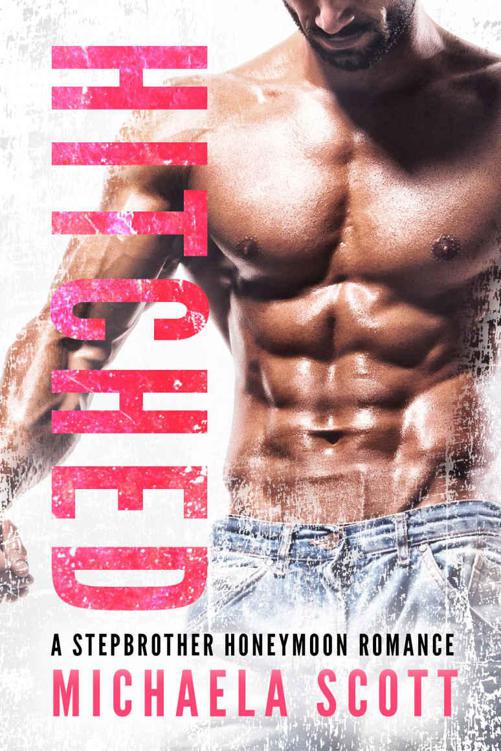 Everyone goes a little crazy in Vegas. But I’m probably the first girl who ever married her stepbrother…

You heard that right. Married. Hitched. Became husband and wife, with a big, fat diamond ring to prove it. And my stepbrother loves every second of it.

His name’s Travis Carter. He’s a wild, inked-up extreme sports star with a dirty mouth and the type of chiseled body that shouldn’t even exist outside of magazine covers and dirty fantasies. He’s aggressive, cocky, and ridiculously, infuriatingly sexy…and he’s my brand new husband.

Travis doesn’t care that this whole marriage thing was supposed to be a plan to sneak into the world’s most exclusive honeymoon hotel and get a scoop for my boss. He thinks that deep down inside, I’m just like all the other girls who lie awake at night, wondering what he looks like underneath those tight, ripped-up jeans. After all, when we first met, I was one of those girls, and I almost gave him everything.

But I’m going to prove him wrong. All I have to do is survive two weeks at a luxury Hawaiian resort full of newlyweds, celebrities, and private beaches without hopping into bed with him and letting him make me his blushing bride. Oh, yeah, and I have to pretend to be in love with him the whole time.

You know, I hope our honeymoon suite has a really, really cold shower. I have a feeling I’m going to need it.

Ugh…what time is it? The sun is shining in my eyes, but I don’t want to get up just yet. After all those drinks last night, I think I’m going to need to sleep in a little. As I shift in bed, I notice that there’s a huge, muscular arm wrapped around my stomach and that what I thought was a comfy pillow is actually a giant bicep. Oh. Hi. Nice to meet you, whoever you are.

Well, I guess I must have had a pretty good night, even if I don’t remember it.

My half-asleep, hungover brain isn’t terribly concerned about any of this, so I pull the blanket up over my face to block the sun, snuggle up against the big, strong guy behind me, and fall back asleep. I hope my new friend doesn’t mind if I drool on his bicep.

A couple hours later, I drift awake again, and this time, I’m even closer to the guy I apparently hooked up with last night. And I’m pretty sure I landed some kind of sex god. Judging by the way his bare body feels against my back, I’m starting to think that I fucked the hottest guy in Vegas, and I don’t even remember it. My butt is pressed up against his insane, rock-hard abs, and his massive pecs push hard into my shoulder blades with every sleeping breath he takes.

An insistent little burn starts to grow between my legs as I realize how tight my partner’s holding me against him. Like he wants me bad, even in his sleep. Thinking about it is starting to make the burning a little bit stronger…I think my body’s trying to convince me to go for round two. I mean, the damage is done, right? I had a one night stand with a total hottie, so why not enjoy myself while I’m here? I’ve earned it, right?

Honestly, I’m pretty impressed that I somehow got away from my family long enough to find a guy to sleep with, so I should definitely…

I open my eyes, fully awake for the first time, and look down at the arm snaking around my body.

Black flames dance up and down the arm that’s wrapped across my stomach. I’d recognize those tattoos anywhere.

I’m in bed with my stepbrother.

I wonder what it’s like to have a normal family. I bet it’s a lot of fun: holiday dinners, yearly traditions, fun family gatherings…

But I wouldn’t know. My version of family time is getting dragged to cocktail parties where everyone is a billionaire with botox leaking out of their ears.

It wasn’t always like this. Back when it was just me and my dad, everything made more sense. We may not have had a lot of money, but we had each other. I worked my butt off to get into a good college, and he worked his butt off trying to make it as a TV producer. Right around the time I turned 18, our hard work paid off. I got accepted into one of the best journalism schools in the country, and Dad landed a high-level gig at a major network.

Everything was going according to plan…until Dad met Nina Carter, and our nice, modest family of two became the world’s most messed up family of four.

Sure, we got a bigger house: a ridiculous mansion up in the Pacific Palisades. But we also got Nina: every self-obsessed, vain, former-child-star second of her. Nina grew up out here in Vegas, in a condo overlooking the strip courtesy of her casino billionaire grandfather. With that kind of money and power, it was easy for her to break into Hollywood at a young age, and before long, she was a household name, and her blonde, sneering face was a regular fixture on TVs across the country. She’s a little older now, but she’s definitely still got it: once she had my dad in her sights, he was hers in a matter of months.

Obviously, I was skeptical that this wasn’t just a career move for Nina, a way to make sure she stayed on TV for years to come. I’m still not 100% convinced that it’s love, but I’m pretty sure they’re at least attracted to each other. Nina’s not a good enough actress to fake the way she looks at my Dad.

They’re on the far side of the cocktail party, talking to one of Nina’s “friends,” a mean-looking 90-year-old man who probably has enough money to buy a small country. Guys like him are why Nina tries to drag me to these awful cocktail parties at least once a month: it’s important to “make the right connections,” she says.

Obviously, I do my best to ignore Nina whenever I can, and the feeling is definitely mutual. But Nina didn’t join our family alone. She brought her son with her, and he’s much, much harder to ignore.

Travis is probably the only person in this room more famous than Nina. Technically, Travis is an extreme sports star who can do things with his bike that most people can’t even do in their dreams, but that’s not why he’s flexing on the bedroom wall of every high school girl in the country. He might be a great biker, but Travis is a household name for one reason and one reason only: he’s drop dead freaking gorgeous. He’s got the type of blue eyes that reflect all your deepest darkest fantasies back at you, a thick head of honey brown hair, and at least two more abs than I thought was even medically possible.

I mean, it’s not like I like him or anything. I’m just stating the facts. Maybe I’d be just as gaga for him as every other girl in the country if he wasn't such an arrogant, full-of-himself douchebox, but since he totally is, I don’t care how many abs he has.

This is the first time I’ve seen Travis in a little while. A couple months, at least. He’s been traveling around the world on a publicity tour, competing in foreign events, hitting red carpets, and doing photo shoots. He’s literally an underwear model now. I learned this unfortunate fact last time I was at the mall, when I almost bumped into a life-size cardboard cutout of him, dressed in nothing but a two-hundred dollar pair of boxer briefs and showing off a ridiculous bulge that
has
to be photoshopped. There’s just no way he’s that big.

And that’s basically a metaphor for our entire relationship. I’m just trying to have a normal life, but Travis keeps showing up and making me think about stupid stuff like whether or not his bulge is real.

He’s leaning against the window right now, looking sharp in a designer tux and chatting with an older guy and his suspiciously young wife. When he catches me looking at him, his lips curl into a smirk and his eyebrows raise suggestively.

Typical. I roll my eyes and go get another glass of champagne. I’m going to need it to make it through this party.

I’m about halfway through my new glass of champagne when Nina’s voice ambushes my eardrums.

Great, just when I was starting to think she was going to forget about me all night. I take one more sip of champagne for good measure, and then I turn around and face Nina.

“You know, Laney, you’ll have a lot more fun here if you stop being such a wallflower.”

Somehow, I doubt that.

“Join the party! There are a lot of powerful people here,” Nina looks around and lowers her voice to a whisper, “And there are also a lot of
very
eligible bachelors.”

I look around the room, trying to see if I can find eligible bachelor. Nope, everyone’s still twenty years older than me. And I’m pretty sure most of them are married. And then there’s Travis…

Oh God, he’s looking at me again. I blush, and my eyes dart down to the bubbles in my champagne.

“You’re not going to find anything in there, honey. Trust me, I know.” Nina takes my hand. “Come on, I’ve got someone I’d like you to meet.”

Nina leads me over to the other side of the room, where the elderly man with the mean eyes is standing.

“Roger, this is my stepdaughter Laney. She’s the one I was just telling you about.”

I shake Roger’s hand and muster up my best networking smile. “Nice to meet you.”

Roger doesn’t look too impressed. And why should he be? OMG might be the biggest celebrity gossip site around, but as an associate content assistant, my main job is to get people coffee, and he probably knows that.

“Well,” Roger’s voice is low and creaky, “I've got some friends over at the Exposer who are looking for an assistant content editor.”

Nina’s eyes light up. “Oh, that’s perfect. That’s exactly what Laney’s looking for. And hey, maybe if Laney works for the Exposer, they’ll stop running stories about me!”

Nina and Roger laugh, and the combined sound of their laughter makes me want to shrink into the carpet. I’m not sure whether “assistant content editor” is a step up from “associate content assistant,” and even if it is, I’d be going from a questionable celebrity blog to a capitol T Tabloid, which would probably kill my journalism career before it even has a chance to get started.

“Laney’s heading back to LA tomorrow, do you think your friends could squeeze in an interview at the end of the day?”

Roger shakes his head and swats at the air. “No, no, no, she won’t even need to come in for an interview. She just needs to call the Editor-In-Chief and mention my name.”

Over the years, I’ve gotten pretty good at tolerating Nina, but nothing makes me angrier than when she tries to control my life like this, assuming what I want and that I need her help to get it. With all this champagne bubbling through my veins, I’m dangerously clothes to telling Roger where he can shove his job offer.

I’d be in serious trouble, but it’d feel so, so good.

“You won’t regret it, Roger. Laney’s a hard worker. She can be a little shy sometimes, but I’m sure she’ll grow out of it.”