The Twelfth Enchantment: A Novel 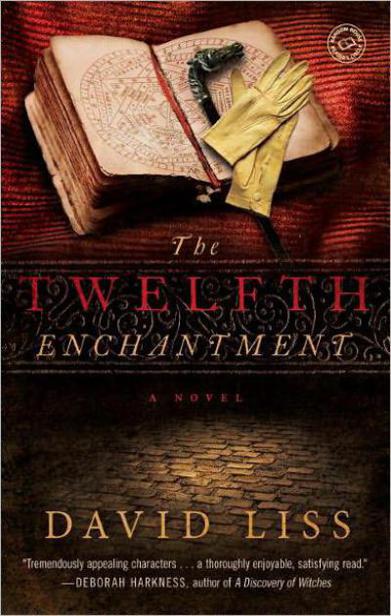 The Twelfth Enchantment
is a work of historical fiction. Apart from well-known actual people, events, and locales that figure in the narrative, all names, characters, places, and incidents are the products of the author’s imagination or are used fictitiously. Any resemblance to current events or locales, or to living persons, is entirely coincidental.

For Eleanor and Simon

T
HE HOUSE WAS ASTIR WITH ACTIVITY, WHICH WAS SOMETHING
most unusual, for its owner, Mr. Richard Lowell, preferred his home to remain a very dour and torpid place. Accordingly, what transpired was activity without delight—that of a graveyard in which the sexton erects a particularly large or novel tombstone. Metaphors of this sort came easily to Miss Lucy Derrick, on whose behalf this commotion centered, for it was her intended husband whom the house prepared to receive. Lucy had no wish to entertain that gentleman. None at all. It was not that Lucy did not wish to marry Mr. Olson, for she had no doubt that marrying him was the most practical thing to do. Nevertheless, she would very much rather avoid the necessity of making conversation with him.

Marriage, as Lucy understood it, involved only infrequent dialogue upon the most essential of subjects, but today her role would be to think of all sorts of engaging things to say, which would not be easy, for Mr. Olson was no great talker. She had not yet discovered how to hold his
interest, for their previous exchanges had been at gatherings and assemblies, where dancing or the consumption of punch could stand in for anything resembling an actual exchange of ideas and sentiments.

Mr. Olson’s social charms, such as they were, had no bearing on her decision to marry him. More than anything else, Lucy wished to be free of her uncle’s house on Pepper Street—near, if not exactly in, the most desirable neighborhoods of Nottingham. She wanted sufficient money that she could feed and clothe herself without reminders of the burden presented by these encumbrances. She wanted to be free of prying and critical eyes, free of the perpetual fear of making an error for which she would be punished like a child. She wanted to feel as though her life were her own, that it was a life in which she belonged, in which she had choices, purpose, even some pleasure.

There had been a time when Lucy had hoped for the things all young ladies desire. She had been the sort of girl—which is to say a very ordinary sort of girl of the middle ranks, though perhaps more that sort of girl than most—who took it upon faith that she was destined for a great and adventurous love. She had two older sisters, and surely at least one of them would marry with the family’s security in mind. Their practical unions would free Lucy to follow her heart, and she had longed to do just that.

Lucy no longer believed herself destined for anything in particular. Her life had come to feel alien, as though her soul itself were not hers, but a copy so clever in its construction that it very nearly deceived her own body. She had been thrust into a strange existence, and her real life had been lost in the misty past, like a favorite childhood toy whose features she could not recall even while her longing for it remained painful and vivid.

In preparation for Mr. Olson’s arrival, Lucy thought it advisable to make herself as presentable as her limited circumstances would permit, so she had no choice but to depend upon her uncle’s serving woman for aid. Mrs. Quince was near forty, and once handsome herself, but was now faded in both beauty and color. In the three years since Lucy had traveled
the near two hundred miles from Kent to Nottingham, she’d seen Mrs. Quince’s hair turn from bright orange to the dull russet of an overripe peach. Her complexion, previously creamy in its pallor, had turned the befreckled sallow of old linen. Lucy did not take actual pleasure in watching the woman’s last charms vanish, but she did experience a sort of grim satisfaction. The only advantage she had over Mrs. Quince, over anyone, was her youth.

Lucy owned little enough that was presentable, and what she had was purchased of her small annuity, resentfully provided by her sister’s husband. Today she wore her best afternoon frock with a bodice
en cœur
, pale blue with white filigree—charming if one but overlooked the fact that it was suited to fashions popular three or four years past. This was Nottingham, however, and Mr. Olson would be disinclined to notice even if she presented herself in a costume of the second Charles’s reign. Or the first’s. Lucy doubted he would notice much at all, despite her looking quite well that afternoon. She was of slightly below-average stature, somewhat dark of complexion, and, if no striking beauty, she was, in the view of most men, certainly pretty with her long nose, arched brows over large eyes, and moderately, if not excessively, full lips. Mrs. Quince, who was very tall and slender, often called Lucy fat, but Lucy considered herself—in contrast to Mrs. Quince—to be shaped like a woman rather than, let us say, a boy.

It was no comfortable thing to put her appearance in such ungenerous hands, but Lucy thought it wisest to submit herself to the older woman’s grim ministrations. Mrs. Quince had ever been solicitous of Mr. Olson’s connection with Lucy, and had shown cheerless satisfaction with the proposal. Now she helped arrange Lucy’s hair, pulling on it, Lucy suspected, harder than necessary. Still, she was dexterous at such matters, and Mrs. Quince arranged her charge’s hair—just shy of black in its darkness—so that it appeared contained, and yet a few strands wantonly escaped from her bonnet to frame Lucy’s round face. When she was finished, Mrs. Quince paraded her before her sepia-toned mirror, and Lucy flattered herself that Mr. Olson would be getting no frump for his pains. Perhaps if he would flirt, she might like him better.

Mrs. Quince made one last adjustment. “I’ve done what I can,” she said. “Your hair is almost negro in its coarseness, and it clings to your head as though wetted by the rain.”

“Thank you, Mrs. Quince,” Lucy said in a fair approximation of gratitude.

“Thank you, Mrs. Quince,”
she repeated, imitating Lucy’s slightly nasal voice. “You might attempt to be polite given that I am making an effort to present you to the world as something respectable.” This she punctuated with a derisive snort.

When she was sixteen, Lucy had briefly run off with a gentleman nearly ten years her senior, but the scheme had been disrupted soon after their departure. Lucy marked this moment as the end of her childhood, the end of her happiness, for during her brief absence, Emily, her beloved elder sister, died from a sudden illness. A year later, Lucy’s father died, and then Martha, the middle sister, entered into an unhappy marriage. One disaster after another, leaving the fabric of Lucy’s life an unrecognizable tangle of thread, and all beginning with her own act of foolish defiance.

Then and now, Lucy could not help but wonder what role her elopement had played in the unmaking of her family. Had she not been so reckless as to run off with Jonas Morrison, would Emily have fallen so suddenly and devastatingly ill? Would her dear sister Emily today be alive? Would her father have died if Emily yet lived? Would Martha have still married their cousin, that horrid clergyman Mr. Buckles? Lucy had sacrificed more hours to merciless speculation upon this subject than could be reckoned. Four years earlier, Lucy had nearly run off with a man, and that remained the most significant thing that could be said about her.

She had believed she truly loved Jonas Morrison, the young gentleman who had once enchanted her, but he had now become the worst of men in her mind. Jonas Morrison, with his easy conversation and his good humor and wit, with his endless card tricks and parlor illusions—pulling brightly colored scarves out of seemingly empty cups or making coins vanish, only to reappear across the room. He had seemed to Lucy
the most delightful of men, but his charm had all been a trick, like one of his clever artifices, an act of sleight of hand and misdirection. He was a monster who had encouraged a youthful Lucy to believe his wanton urgings were right and just and dignified, and all these years later, the mere thought of him set her to clenching her teeth and muttering under her breath. All of Lucy’s life had been a game then, with her fine home, and many friends, and loving sisters, and her distantly protective father. She’d been safe and free to indulge her fancies and think nothing at all of consequences. Perhaps she had not truly believed in consequences at all.

She believed in them now. The exposure of her scheme had taught her all about consequences and humiliation and regret though, thankfully, not full-fledged scandal. She had been spared that at least, for while word of running off with Mr. Morrison soon became general knowledge, so too did the fact that Lucy was safely brought home without having given up her virtue. She may have been widely regarded as a foolish, impulsive girl, but at least she was not thought a whore. Perhaps her actions would have had more damaging consequences at the time had her family not been torn asunder by her sister’s death, and so the wagging tongues of gossips made little impression upon Lucy or her father at the time. But Mrs. Quince would not permit her to forget what she had done. Early on, she had divined Lucy’s antipathy to the name
Jonas Morrison
, and so she loved to use it freely. When Mr. Olson had begun to show an interest in Lucy, Mrs. Quince delighted in comparing him to the great
Jonas Morrison
. The teasing had abated somewhat once it became clear that Mr. Olson’s attentions were serious, for she wanted Lucy gone from the house as much as Lucy wished to depart.

The Spy Wore Red by Wendy Rosnau
The Fuller Memorandum by Stross, Charles
Death's Door by Meryl Sawyer
Die in Plain Sight by Elizabeth Lowell
Golden State: A Novel by Richmond, Michelle
Wikiworld by Paul Di Filippo
Finding Laila: Some Changes are Necessary by T.K. Rapp
The Hopeless Hoyden by Bennett, Margaret
The New Rakes by Nikki Magennis
At Her SEAL's Command (SEALs of Roseville, Book One) by Selena Blake