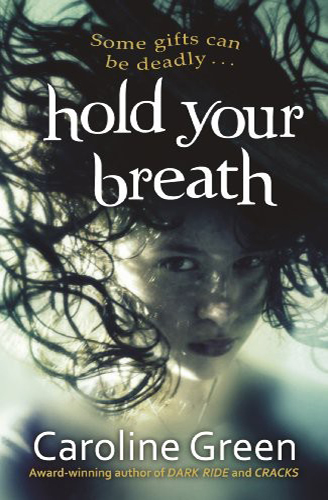 ‘If you devoured
The Hunger Games
this will hit the spot.’

‘Taut and suspense packed right up to the last page.’

‘A fast-paced thriller in which nothing is as it seems.’

The Independent on Sunday

‘A gripping story, impossible to put down. Green cranks up the tension with every page.’

‘Full of tension, mystery and real-life drama,
Dark Ride
is not to be missed.’
Chicklish

‘Almost impossible to put down.’
Goodreads

Caroline Green is an experienced freelance journalist who has written stories since she was a little girl. She vividly remembers a family walk when she was ten years old where
she was so preoccupied with thoughts of her new ‘series’ that she almost walked into a tree.

All rights reserved. No part of this publication may be reproduced, stored in a retrieval system, or transmitted in any form or by any means electronic, mechanical,
photocopying, recording or otherwise, without the prior permission of the copyright owner.

The right of Caroline Green to be identified as Author of this work has been asserted by her in accordance with the Copyright, Designs and Patents Act, 1988

Also available as an ebook

T
he blackness began to dissolve. She tried to move her head but pain jack-hammered inside her skull and nausea gripped her stomach. Closing her
eyes, she willed the sensations to pass.

Minutes went by. Or was it longer? Time didn’t seem to run in a straight line any more but looped and rolled back on itself. When she opened her eyes again her bottom lip was smushed
against something damp and cold. Raising her head and blinking heavy, sticky eyes, she saw that she was lying on a duvet with a faded pattern of daisies and that she had been drooling on it.
Coldness had seeped through the duvet from the hard floor beneath it. Groaning, she forced her body up onto her elbows. Her head hurt everywhere, but one part of her scalp throbbed with bright
urgency. She drew her tongue over dry lips, tasting blood; it felt swollen and oversized in her mouth.

She rolled onto her back and discovered her wrists and her ankles were bound with strong plastic ties. A single lightbulb hung in the middle of a ceiling above her, its glow sickly in the gloom.
Familiar . . . but why?

A wooden chair, heaped with blankets, was opposite her. Then the blankets moved.

The hissing voice kicked her heartbeat faster. She could see now that there was a figure there, sitting upright, hands folded between their knees.

She hoped she was asleep. Then she would wake up in her own bedroom with sunlight soaking through her curtains.

But hot tears slid down her face because she knew this nightmare was really happening.

‘I know, I know! Oh for God’s sake, has anyone seen my keys?’ Mum bustled into the room in a cloud of perfume, her kitten heels tapping the stone tiles with a staccato
rhythm.

Tara met her mother’s eyes for just a second. But it was long enough. She turned her attention back to the screen of the laptop.

‘Nope,’ she said flatly. ‘No idea where they are.’

Mum sighed and left the room.

Tara knew the cocktail of emotions her mother was feeling. Relieved, because Tara hadn’t done her ‘thing’, yet wishing she’d been able to locate the missing keys all the
same.

As they say, it was complicated.

She looked down at the maths problem in her homework and breathed slowly. Distraction, that’s what she needed in these moments. Focus on something else. She was getting good at it. Then
Beck turned his music right up and both her parents yelled, ‘Turn it down!’ at the same time. Tara’s concentration shattered.

The inside of a pocket. A rain jacket. A crumpled tissue. The packet of cigarettes that Mum thought no one knew about. Nestled beneath them, the keys with the sparkly heart charm lying at
the top.

Dad spoke, bringing her attention sharply back to the room.

‘What were you wearing yesterday?’ he said, his voice taut with irritation.

‘So maybe your cagoule?’ Dad was the only person in the world who referred to a rain jacket as a cagoule. Tara felt a squeeze of affection, despite the queasy feeling in her stomach.
At this rate, they’d be late for their anniversary meal and it would be her fault. She contemplated opening her mouth and freeing the words stacked up there. ‘Mum, your keys are in your
cagoule.’
But she knew it would prompt quick, alarmed glances between her and Dad.
This again? Didn’t we think Tara had stopped this?

But thankfully she didn’t have to say anything.

A few minutes later the keys had been located. Mum and Dad yelled goodbye and the door closed behind them. Tara could imagine the conversation only too well.

‘I really think she’s grown out of that phase now, thank God. Don’t you?’

‘I told you it would only take time. The whole sorry episode is best forgotten.’

Yes, Dad
, she thought.
Let’s just pretend none of it happened. Let’s pretend Tara’s normal. And that no one ever got hurt.

Beck came into the room then. One hand was rummaging inside his jeans, as usual. The other held a can of Coke, which he scrunched up and tossed into the bin before burping roundly.

He grinned, flashing his perfect teeth. His green eyes twinkled. Tara snorted and turned back to the computer screen. That cheeky smile might charm most of the female population between the ages
of ten and eighty but it didn’t work on her.

‘Right, I’m offski,’ he said, snatching up his jacket from the back of the chair.

‘But you said you were staying in tonight!’ She couldn’t control the desperation that clung to her words.

Beck shrugged. ‘Had a better offer. Anyway, you don’t need babysitting, do you?’

‘Oh come on, Tar,’ he said in a bored voice. ‘You might want to sit in every night like some sort of nun, but some of us have a life.’

‘Get lost then,’ she said tightly.

‘Off you go,’ she interrupted. ‘I don’t care what you do anyway.’

She turned back to the computer screen.

Tara gazed at the screen but the homework may as well have been in hieroglyphics. The numbers began to swim and distort and she knew that one of those horrible headaches was coming. They always
did after she’d ‘found’ something. Even though she hadn’t even been
trying
to find Mum’s keys. Which was pretty unfair.

Getting out of the chair, Tara stretched, trying to free the tightness in her neck and shoulders. Mum was always telling her off for her posture. She raised her fingertips into the air as high
as she could, her T-shirt riding up and exposing her waist. A memory of Jay’s warm hand on the small of her back at the pool party loomed out of nowhere. She caught her breath at how much
this still hurt, despite everything else that had happened.

Some of us have a life
, Beck had said.

Maybe other people deserved one.

Beck had no idea what it was like to be her. To have guilt gnawing at your insides every single day. A wave of bitterness washed over Tara then and she swore. The word rang out, loud and
satisfying, in the empty house.

A walk, she decided. She’d get out of here for a while and try to walk off the headache and the bad thoughts.

Their yellow Labrador trotted into the room, brown eyes hopeful and tail wagging with a metronome beat. Tara smiled and went to the cupboard to get his lead. When Jay had been pushing her
further with whispered promises and urgent kisses last summer, she’d lain on the back lawn, arm slung across Sammie’s furry back. The dog had slumbered peacefully next to her and Tara
had felt like the smelly old mutt was the only loved-one in her life who didn’t put any pressure on her.

Their shadows stretched long and thin in the low evening sun as Tara and Sammie headed down the alley near the house. It led to the river, which ran all the way into the centre of town.

It was the beginning of October and everyone was talking about an Indian summer. The weather veered from unseasonal heat to thundery rain from day to day. But tonight, the air felt soft and warm
on the bare skin of her arms and the edgy feeling inside Tara began to calm a little.