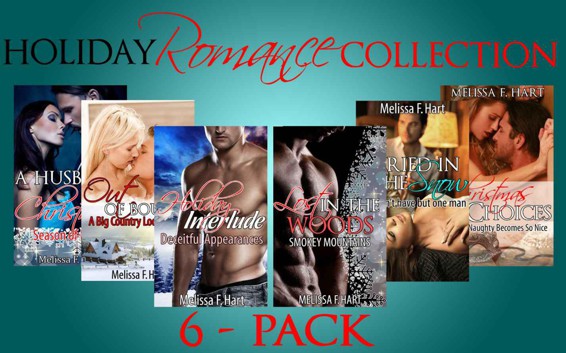 No part of this book may be replicated, redistributed, or given away in any form or by any electronic or mechanical means, without the prior written consent of the author/publisher.

A Husband for Christmas - Season of Desire

Maeve fled the cold of
Chicago
for the sunny tropical climes of
Miami
in the hopes of starting a new life after suffering from the loss of her husband in a top secret mission gone wrong. But one day, the man she thought was dead appears on the doorstep of her flower shop. Can she forgive him for staying away and leaving her in an agony of grief for almost two years? And will she finally get what she thought she’d lost forever – “a husband for Christmas”?

When Andie Nichols breaks up with her controlling boyfriend Evan Harrington just before the big Christmas party, she dreads going and having to see him there.  Still, she doesn’t want to give him the satisfaction of knowing that she didn’t go just to avoid him, so she takes up residence at the free bar, just hoping to avoid him  That’s when she meets Ryan Miller and kisses him to show off to Evan.  Ryan is shocked, but likes it.  They leave the party together, and Ryan reveals a shocking secret of his own.  He likes a woman who isn’t afraid to demand what she wants and offers to be her sex slave.  The choice is all hers, but if she is willing to be a little naughty, he promises to make her feel oh so very nice.

Danielle accompanies her best friend Alondra on a skiing holiday in the Swiss Alps, intending to cheer up her friend after her recent breakup. However, their mutual interesting the ski instructor could result in her needing to choose between her friendship and her desires.

Lost in the woods -
Smokey
Mountains

Rose needs a vacation. She recently broke up with her boyfriend, she has a deadline looming, and no inspiration to finish her book. Rose decides a drastic change of scenery is what she needs so she takes off to the
Smokey
Mountains
looking for inspiration. When Rose meets Triston her vacation takes an unexpected turn and nothing goes like she planned. Triston is injured and Rose gets snowed in. Will Rose find what she is looking for or will she be Lost in the Woods?

Out of Bounds - A Big Country Lodge Story

Kate Whitworth was desperately unhappy. Spending the Christmas holidays at Big Country Lodge trying to reconnect with her husband Dan and rebuild their marriage seemed like an impossible task, especially given the fact that they were supposed to rekindle their romance in the only place Kate had first known real love—with her high school crush, Josh Carter. When Kate runs smack into Josh at the Lodge, her memories tumble back to their passionate love-making and her resolve to work on her marriage is severely shaken. When Josh leads her back to the romantic warming hut where she lost her virginity years ago, will she be strong enough to resist?

Buried in the Snow - You can’t have but one man

Janet Wilson, having saved up for the trip of a lifetime—a ski trip to
Austria
—gets buried in an avalanche her first day there.  To the rescue is the owner of the lodge where she’s staying and the head ski instructor, Franz Eigner.

It’s easy to fall in love with the charismatic and handsome Eigner, but there are several stumbling blocks along the way, not the least of which is a messed-up family life and a conundrum along the way for Janet when she finds out who Franz’s partner is.

A Husband for Christmas

Lost in the W
o
ods

Buried In
t
he Snow

A Husband for Christmas

The ice cream truck turned onto Maeve’s street playing a tinny and slightly mad version of Rudolph the Red Nosed Reindeer. She looked up from her crouch in her front garden, watching the bright yellow truck cruise further into her cul-de-sac, Christmas songs blaring. On the street, blinds parted, curtains moved aside. Then doors opened, ejecting children and a few adults into the blazing Sunday afternoon toward the ice cream truck.

Sweat dripped from the back of Maeve’s neck as she dug holes for the new row of purple pansies she’d just bought from the gardening store. The
Miami
sun slipped under her white blouse, searing into her back. Even in the extremes of
Chicago
she’d never been this hot. But she didn’t mind the heat. With her curly brown hair held at the top of her head in a fluffy ponytail and the white shirt doing its best to deflect the burning rays of the sun, she figured she was doing pretty well. Two days until Christmas. Incredible.

She looked at the ice cream truck with sudden longing. Ice cream at Christmastime. The last time she’d indulged in that particular pleasure was in
Chicago
, in a much different version of the holidays, with snow falling outside the windows of her small apartment and her husband snuggled next to her in front of the crackling fireplace while they shared a tub of chocolate chip cherry ice cream. Maeve remembered the feel of his big hand on her bare thigh, warm and resting casually there, a promise of more sensual pleasures in the deeper night to come.

Her husband. Her Jacob.

Maeve watched the children and felt another pang, unaccountable and sharp. One of those could have been hers. Hers and Jacob’s. But he’d never lived past their second anniversary and he had insisted on waiting until he was in a less dangerous division of his job at the
CIA
before they started a family. Some days she regretted that. If she had had his baby, at least she would now have a piece of him to keep close to her.

Maeve wiped her gloved wrist across her forehead and stood up with a sigh, pushing aside the useless thoughts. Her husband was gone. There was nothing she could do about it. Never mind she’d told herself the same thing nearly every day for almost three years. The words didn’t make her feel any better now than they had in the past. She still missed Jacob with an ache that still took her breath away.

But the rebellious
Miami
sun made her slightly less unhappy, made her sometimes forget what she had never been able to in the wintry city she’d lived in for most of her life. Where she’d lived with Jacob. Her darling. Her love.

One of her neighbors, Cecily, called out from across the little cul-de-sac. As was usual for a Sunday afternoon, Cecily was still in her bathrobe, drinking coffee from the cow shaped mug that was part of her weekend costume.

“Hi, Cecily.” She waved back, smiling.

“Your marigolds look fantastic every time I see them,” Cecily said, keeping an eye on her six-year-old who waited impatiently in line behind over half a dozen kids for his turn at the ice cream truck’s window.

She was a single mother who worked a high paying executive job during the week and devoted all her weekends to her child. She strolled down her short driveway toward Maeve.

“It’s like you cast a spell over those plants or something,” Cecily said.

“And a God-given green thumb.” Cecily sipped from her giant coffee mug. “I need to stop by your shop after the New Year and pick up a few arrangements for the office. Some clients need impressing.”

“I’d love that. And drop by this week if you need anything else for the holidays. I’m working every day, even Christmas.”

“Of course.” Maeve shrugged. “Since my family is in
Chicago
, I don’t have any plans for the holidays. Plus, I don’t know how you guys celebrate Christmas in
Miami
. It seems so strange with no snow and all this sunshine.”

“You’ll find out soon enough.” Cecily laughed. The sound of the ice cream truck’s music threaded through the sound of her high, merry laughter. “It’s not about the snow; it’s about the people around you.”

Maeve winced. If that was the case, this Christmas was going to be as desolate as the last for her. Except for her good friend, Gina, she had no one with her in
Miami
. Her family in
Chicago
was tired of listening to her talk about how much she missed Jacob, how much he had meant to her. They thought she should have gotten over his death by now. But they had never understood how she felt. The ones who did understand were far away, like Sasha, one of her good friends from college who’d moved back to
New York
after graduation. Her other good friend, Gina, who lived not very far away from her in Coconut Grove, came to see her whenever her job and life allowed. She had invited Maeve to join her family for Christmas but she wasn’t sure yet if she was going to accept the invitation.

“In that case, Cecily,” she replied to her neighbor, “I hope to be in only the best company this Christmas.”

“Live in hope, girl. A positive attitude gets you farther than you think.” She tousled her son’s wild hair as he passed her with his ice cream cone. The vanilla was already beginning to melt down the side of the waffle cone.

“Mom!” he whined at her affectionate display, flicking his gaze at the other kids in the cul-de-sac to see if they noticed.

Cecily rolled her eyes, smiling. She stayed in the driveway, watching the ice cream truck dispatch more ice cream to the rest of the kids then drive off, piping its insanely happy Christmas music as it made its slow way to the next block of eager children.