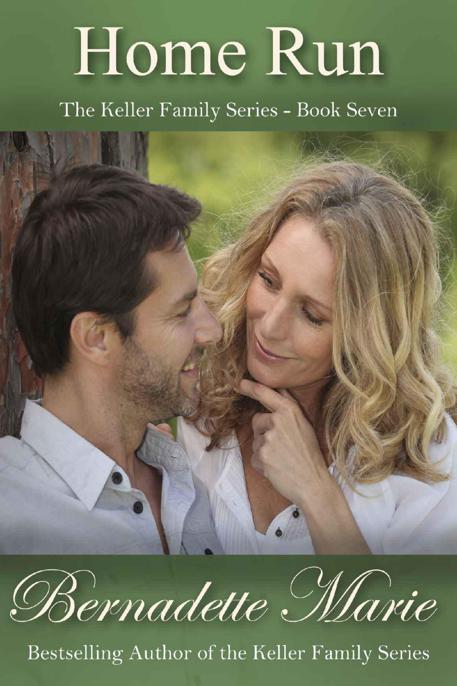 Together we have made a home run with our little team

For the days no laundry is done or the dishes pile up…for the times when the emotions of the characters trump my own…thank you. Your belief in me to let me live this dream…well you know…You’re my everything!

To my private hockey team:

You boys make me so proud. I love our little family. You give me lots of inspiration to do what I do!

To my mom, dad, and sister:

Thanks for giving me a foundation to build this family in which readers have fallen in love with.

To Connie and Sara:

Could I have pushed the limits any harder? You’ve made this possible! You’ve helped me achieve it!

Remember, I am not responsible for your addiction! But I’m sure glad it became one!

I am very excited to bring you the seventh book in the Keller Family series.

We have followed Christian Keller since he was a young boy learning to deal with his mother’s illness and his parents’ separation. But he’s all grown up now.

Victoria Lincoln, whom we met in book 5, has captured Christian’s heart. But tragedy threatens to separate them forever.

One of the things I hear most from readers is how they love the compassion of the Keller men and the strength of the women. It has been the force in my writing so many stories for this amazing family.

I hope you will enjoy Christian and Victoria’s compelling story as much as the others.

Be sure to keep reading as you will find the first chapter of book eight
The Acceptance,
when we get to know Tyler Benson, the eldest son of Regan and Zach Benson—the couple that started it all.

Other Titles by Bernadette Marie

Cart Before the Horse

There was a pure energy in the car as they drove away from the arena. Christian Keller had it all, just when he thought he’d lost it.

His career-ending injuries were just the start to finding out he could keep going and that’s what he was doing.

He’d just watched his sister perform with her husband, on stage at the Bridgestone Arena right there in Nashville. Hometown kids making it big time.

As his best friend Dave pulled out of the parking lot the number one country song came on the radio, and wouldn’t you know it, it was Clara and Warner Wright, his sister and her husband.

Christian’s fiancée, Victoria, hugged his arm and slid across the back seat as close as she could to him. “That was the best concert ever. Your sister and Warner were phenomenal.
The Broke Tourists
are one of my favorite bands. And that Savannah and her hair!”

Ashley, Victoria’s sister, turned in her seat and looked at her. “I know, right? Do you think we could buy hair like that?”

They both laughed, but Christian just took in the ambiance.

His career as a baseball player was over. He had come to grips with that. It had caused him a lot of emotional and physical pain over the past year, but now he had new things to look forward to.

They were already talking about him coming into the organization as management. The woman of his dreams had accepted his marriage proposal and wore his ring. And tonight, he’d take her home to the home he had built—for them. It was a surprise and he had something very special planned.

“You know,” Victoria continued. “Ali would love a Savannah wig. We should think about marketing them.”

“My kids and their tastes,” Ashley added.

Laughter filled the car and then a scream pierced the air.

A blinding white light forced him to cover his eyes.

Christian sat up in bed. His heart was racing. His face and hair were wet. And he was alone.

He threw his head back against his pillow.

Of course he was alone. He’d been alone for almost a year and the replay of that night wouldn’t give him any peace.

Christian rolled to his side and he looked at his phone on the night stand. It was five-thirty in the morning. He let out a grunt and rolled out of bed.

It took a minute for his knee to be stable under him. His shoulder ached, as it had since the surgery after the accident.

He flipped on the light in the bathroom and looked at himself in the mirror. The jagged scar on his forehead was beginning to fade, but it would always remind him that on that night he’d lost everything. His career. His best friend. And even if her life wasn’t taken—he’d lost his fiancée.

Well that was life now. She had a lot to deal with too.

Victoria’s life had changed drastically when that drunk driver crossed the median. She’d lost her sister in that moment. Her leg was shattered. And she was the next of kin to her niece and nephew, whom she was now raising.

A single woman trying to advance her career and plan a wedding was now guardian to a two year old and a four year old—and he was no help.

Christian turned on the shower and let it warm.

He’d been so overwhelmed with losing his best friend he’d nearly lost his mind. And it wasn’t losing him. It was watching him die and not being able to get free from the accident to help him.

Just the thought of it made his heart kick start again.

He slipped off his boxers and climbed into the shower. No matter how hot the water was, it would never wash away the pain that day still caused.

By six thirty, he was dressed and sitting in his quiet kitchen having a cup of coffee. The dress shirt and tie made him uncomfortable, but it was the way he had to dress for work now. He supposed he owed it to his brother and uncle for stepping in and giving him a job, though he didn’t care much about construction.

His entire family had stepped in when he needed them. There was no way to repay them. His sister Clara and cousin Avery were at his house daily to make sure he ate. His mother stopped by and cleaned the house. His future sister-in-law Darcy made him freezer dinners and stocked them for him.

When would it all ease so he could get on with his life?

Before lunch, the door to his office creaked open and Darcy stuck her head in.

“I’m going to lunch with my bridesmaids. Ed is free for Chinese food. He said to send you his way when you’re done.”

Christian nodded. “I’ll be done in a few.”

Darcy shut the door and Christian was alone, again. It was funny, he thought, for being so alone all the time there were always people around him. That was what came with a big family.

A new Chinese restaurant had opened just down the street and Ed had been dying to try it. Christian figured it would be good for leftovers and that it would warm up easily for dinner. It was just one less thing to think about.

“So did you look over that proposal I sent you?” Ed asked as he adjusted the place setting in front of him.

“Yeah. I don’t know if I understand any of it. Could you work in some baseball terms?”

Ed laughed. “It’s a baseball stadium. I thought you’d want to be part of that.”

He lazily looked around the restaurant and that was when a set of dark eyes caught his.

Victoria waved and was already walking toward them.

It had been nearly eight months since he’d seen her—since he’d told her that he wasn’t someone who could just take on someone else’s children and start from there. That was the day she walked out of his life. God, he was an idiot.

She looked different. Her hair was shorter and there were dark circles under her eyes, as if she hadn’t slept in eight months. He probably looked like that too. He never got a good night’s sleep.

“Hello, Chris.” She smiled down at him and then turned her smile to Ed. “Hi, Ed.”

“Tori!” Ed crawled out of the booth and gave her a hug. “How are you?”

“I’m good.” Christian wondered if she noticed her voice quivered.

Christian watched as her jaw tightened and she kept her eyes on Ed. “Sam just turned three last weekend. He’s into everything. Ali just started kindergarten.”

Christian narrowed his stare on his brother.

“You’ll be at the wedding right?” Ed was touching her arm. “I thought Darcy said you’d RSVP’d.”

“I wouldn’t miss it for the world. Ali can’t stop talking about it.”

“I look forward to it.” Ed smiled and then both of them looked at Christian still seated in the booth.

“Guess we’ll see you then,” he croaked out.

Victoria nodded and forced a smile. As she walked past him, limping just as he did now too, she put her hand on his shoulder. “It was good to see you, Chris.”

Then, she was gone.

Ed sat back down and shook his head. “You’re pathetic.”

“She’s still in love with you.”

“Because she had to.”

“Had to?” He picked up his hot tea and burned the pads of his fingers and then his throat. But it was worth it.

Ed opened the package of chop sticks by his plate and tore the two wooden pieces apart. “She lost a lot that night. Her sister died. Her brother-in-law died. She got two kids to raise and has no parents to help her. She’s all alone and all you could tell her was you weren’t ready for a fully formed family. I didn’t realize you were an asshole, until that day.”

If Christian was the man he used to be, he’d be up from that table and have pulled his brother out of that side of the booth by his shirt collar. But as if to remind him that he wasn’t an athlete any more, his knee throbbed and the pain shot up through his body.

Christopher and Jaime (Pianos and Promises #1) by Jennifer Peel
PS... You’re Mine by Alexa Riley
Last Another Day by Higgins,Baileigh
Revenge Of The Elf (Book 1) by Lucas Thorn
OBSESSED WITH TAYLOR JAMES by Toye Lawson Brown
All That Mullarkey by Sue Moorcroft
The Fire Children by Lauren Roy
Night Music by Jojo Moyes
Romance In The Tuscan Hills: A New Beginning by Jenniffer Cardelle
Murder Walks the Plank by Carolyn Hart