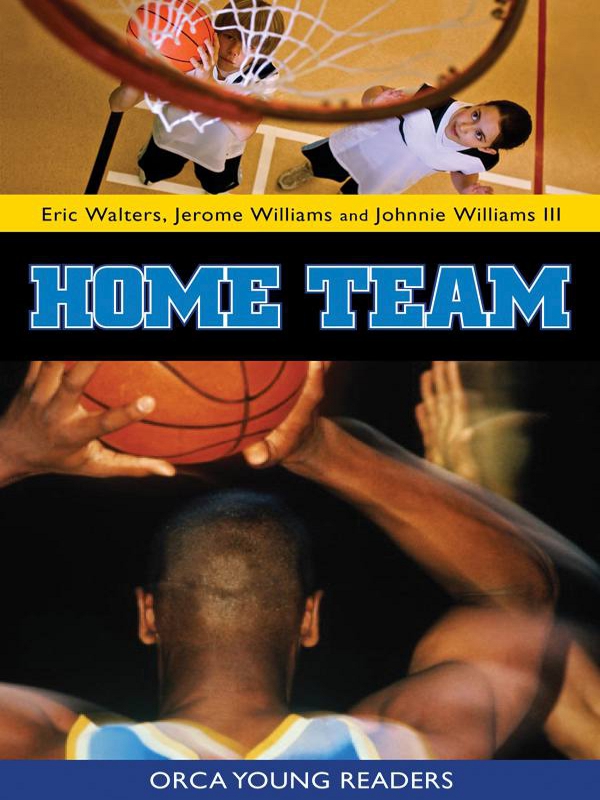 Summary
: Against all odds, Nick and Kia set out to persuade the Toronto Raptors' community relations department to send players to visit their school.

To the members of my Home Teamâmy great friends Johnnie and Jerome and the hundreds and hundreds of members of the Toronto District School Board reading clubs who made this the book what it is. It's an honor to be part of such an incredible team!

To all the Read To Succeed participants who love reading and basketball. As a former professional athlete and current Global Ambassador, I can assure you that the NBA CARES about young readers. So inflate your mind and bounce towards your dreams.

To my Lailah Buggins, who is just beginning her educational journey. I would like for her to always remember that literacy will help her navigate towards her dreams. So read to succeed.

“And just before we start our assignment,” Mrs. Orr said, “can somebody, once more, just to be certain we all understand, tell us the difference between a
friendly
letter and a
business
letter?”

A flock of hands went up. I knew the answer, but there was no point in being a show-off about it.

Jennifer gave a smug little smile, like she'd just invented a car that ran on water instead of giving the world's lamest answer. My problem was I hated lame. I hated obvious. And I hated suck-ups. This was grade sixâmaybe only the first week of grade six, but still it
was
grade six. Shouldn't we be old enough to avoid all of that?

I stuck up my hand.

There was a twittering of giggles. That only encouraged me.

“Or what if it is your friend, but you want to write something that is businessyâ¦is that a word? Well, either way, is that a friendly letter orâ?”

“It
isn't
a word,” she said, cutting me off. “And it isn't who you're writing to, but the
nature
of the letter.”

Kia's hand went up immediately, followed by hand after hand until more than half the class had a hand in the air. I didn't know if Kia was really confused, but it was guaranteed she'd back me up on it regardless. After all, she was my best friend.

“Since many people seem less than clear, it's probably a good idea for us to clarify it further then,” Mrs. Orr said. “Thank you for bringing that up, Nicholas.”

“You'reâ¦umâ¦welcome,” I stammered. I wasn't trying to be helpfulâI was trying to be difficult or funny or something.

“For example, Nicholas, to whom did you write your friendly letter? Oh, wait, I rememberâ¦it was some basketball player. I can't quite recall his name.”

“Wayne Dawkins,” I said, unable to believe that she couldn't remember
his
name. “And he isn't
some
basketball player, he's
the
star of the Raptors.”

“My apologies,” she said. “When you wrote your friendly letter to him, what were you saying?”

“I was just telling him how much I like watching him play and how good I think he is. And telling him what I like to do, who I am. That sort of thing.”

“So the tone of the letter was friendly, like you were writing to a friend.”

Actually I
did
have a friend who had been in the NBA. My buddy, Jerome “JYD” Williams. JYD were the initials for Junk Yard Dog, a nickname he got because he played the game with such intensity. Before he retired he'd played with four different teamsâDetroit, Chicago, New York and, of course, Toronto.

“The letter we're going to be writing today,” Mrs. Orr said, “is not about friendly things but is directed toward getting something, making a complaint, offering a compliment or requesting something.”

“Could I write to Wayne Dawkins and request that he become my friend?” I asked.

The whole class broke out in laughter.

“I'm afraid not. There has to be a more specific business requestâas I said, a compliment or a complaint or a suggestion.”

“Couldn't I compliment him on his play, or complain about the referees, or suggest that they win more or complain that he's not my friend?”

More laughter, which Mrs. Orr silenced with a glare. This was only the second week of school, but a lot of us had had Mrs. Orr as our grade-three teacher, and we knew not to mess with her. She was fair, and I liked her, but she was pretty strict.

“Just to be clear, Nick, you cannotâI repeatâ
cannot
write to Wayne Dawkins,” she said. “You have to write to a business to make a business request.” She paused. “Understood?”

The door opened and Mr. Roberts, our gym teacher, walked in. He was dressed, as always, in his sweats, a school T -shirt and big red basketball shoes. I didn't know what size those shoes were, but if they were a couple of sizes bigger, he could have swapped footwear with Ronald McDonald. Not that I was making fun of him, but just sayingâ¦He was a pretty cool teacher and they
were
great basketball shoes. Just a little big. Well, unless you were a clown.

“Now that we all understand our assignment, I'll leave the class in the capable hands of Mr. Roberts.”

I wanted to hoot, but I knew better. Bigfoot wasn't just our gym teacher but also the coach of all the school teams, including my favoriteâ the basketball team. Our season was just about to start, and I was really looking forward to itâ¦ well, mostly.

“So what's the assignment today, boss?” he asked Mrs. Orr.

“They're working on business letters. If you can help them with their writing assignment, that would be wonderful,” Mrs. Orr told him.

“No problem. Lettersâ¦I know all twenty-six of themâ¦from
A
to
Z
.”

Mrs. Orr gave him a questioning look and then smiled. She knew he was joking. He was always joking. Except during basketball gamesâthen he was dead serious.

Mrs. Orr gathered up her marking and other things she'd need from the desk. She stopped at the door.

“It's important that they get a good start on these,” she suggested.

He gave her a little salute, and she left and closed the door behind her.

Three times a week Mr. Roberts came into the class to supervise and teach us when Mrs. Orr had planning time. I really looked forward to those times. Not that I didn't like Mrs. Orrâ she was my favorite regular teacher of all time, even if she was kind of strictâbut Mr. Roberts was more fun. So much fun that he would often get sidetracked and forget to have us do the work we were supposed to do. That's why he always got a little extra warning and a side look from Mrs. Orr.

He walked around the room as we all started thinking or working on our letters. That was how he spent almost the whole time in our classâpatrolling. The rare time he sat down at Mrs. Orr's desk, he did more bouncing than sitting. He was constantly tapping his foot or fumbling with his hands or munching on some snack food or drinking from his water bottle. He had a lot of trouble sitting still. I think he was kind of hyper. Yeah, he definitely was. Maybe hyperactive boys grew up to be gym teachers with big feet. That wouldn't be a bad job. Maybe I should become a gym teacherâwell, at least after my career in the NBA was over.

I noticed that hardly anybody was actually writing. They were all sitting there, pen in hand, thinking. Or at least pretending to think. Obviously this wasn't an easy letter to write. Certainly not as easy as the friendly letter. I guess we all had friends, but how many kids in grade six had a business they wanted to write to? We were eleven and twelve years old. What did we have to do with any businesses?

“Hey, Nick,” Mr. Roberts said as he bounced over beside my desk. “Did you catch the game last night?”

“Yeah, like he'd miss a Raptors game,” Kia said before I could answer.

He turned to Kia. “Look who's talking. When was the last time you missed a game?”

“So what did
you
think of last night's game?”

“It was goodâ¦until the end,” Kia said.

“That game drove me crazy!” I exclaimed.

“Leading by three points with five seconds left and they didn't foul anybody! Don't they understand basketball at all?”

“Exactly!” Mr. Roberts agreed. “Basketball 101 states that you should foul the guy and put him on the line. Then, even if he gets both free throws, you're still leading by one point and you get back the ball and the game is over.”

“Instead they sink a three-pointer, tie the game and we lose in overtime. I wanted to kick the tv,” I said.

Tales for a Stormy Night by Dorothy Salisbury Davis
Dreamwalkers by Kate Spofford
Dropping Gloves by Catherine Gayle
Bind Me (Roommate Romance #2) by Folsom, Rene
Blockade Billy by Stephen King
Tina Whittle_Tai Randall Mystery 01 by The Dangerous Edge of Things
Till Death Do Us Bark by McCoy, Judi
Allegiance (Joe Logan Book 4) by Michael Kerr
Book of Rhymes by Adam Bradley
Let the Circle Be Unbroken by Mildred D. Taylor