Based on the conclusions of this first part, the second part of the book examines the bizarre world
Homo sapiens
has created in the last millennia, and the path that took us to our present crossroads. How did
Homo sapiens
come to believe in the humanist creed, according to which the universe revolves around humankind and humans are the source of all meaning and authority? What are the economic, social and political implications of this creed? How does it shape our daily life, our art and our most secret desires?

The third and last part of the book comes back to the early twenty-first century. Based on a much deeper understanding of humankind and of the humanist creed, it describes our current
predicament and our possible futures. Why might attempts to fulfil humanism result in its downfall? How would the search for immortality, bliss and divinity shake the foundations of our belief in humanity? What signs foretell this cataclysm, and how is it reflected in the day-to-day decisions each of us makes? And if humanism is indeed in danger, what might take its place? This part of the book does not consist of mere philosophising or idle future-telling. Rather, it scrutinises our smartphones, dating practices and job market for clues of things to come.

For humanist true-believers, all this may sound very pessimistic and depressing. But it is best not to jump to conclusions. History has witnessed the rise and fall of many religions, empires and cultures. Such upheavals are not necessarily bad. Humanism has dominated the world for 300 years, which is not such a long time. The pharaohs ruled Egypt for 3,000 years, and the popes dominated Europe for a millennium. If you told an Egyptian in the time of Ramses II that one day the pharaohs will be gone, he would probably have been aghast. ‘How can we live without a pharaoh? Who will ensure order, peace and justice?’ If you told people in the Middle Ages that within a few centuries God will be dead, they would have been horrified. ‘How can we live without God? Who will give life meaning and protect us from chaos?’

Looking back, many think that the downfall of the pharaohs and the death of God were both positive developments. Maybe the collapse of humanism will also be beneficial. People are usually afraid of change because they fear the unknown. But the single greatest constant of history is that everything changes. 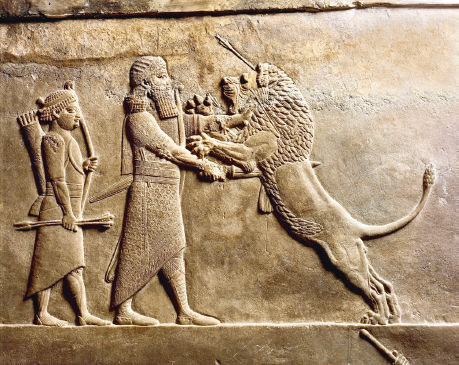 What is the difference between humans and all other animals?

How did our species conquer the world?

Is
Homo sapiens
a superior life form, or just the local bully?

With regard to other animals, humans have long since become gods. We don’t like to reflect on this too deeply, because we have not been particularly just or merciful gods. If you watch the National Geographic channel, go to a Disney film or read a book of fairy tales, you might easily get the impression that planet Earth is populated mainly by lions, wolves and tigers who are an equal match for us humans. Simba the lion king holds sway over the forest animals; Little Red Riding Hood tries to evade the Big Bad Wolf; and little Mowgli bravely confronts Shere Khan the tiger. But in reality, they are no longer there. Our televisions, books, fantasies and nightmares are still full of them, but the Simbas, Shere Khans and Big Bad Wolves of our planet are disappearing. The world is populated mainly by humans and their domesticated animals.

How many wolves live today in Germany, the land of the Grimm brothers, Little Red Riding Hood and the Big Bad Wolf? Less than a hundred. (And even these are mostly Polish wolves that stole over the border in recent years.) In contrast, Germany is home to 5 million domesticated dogs. Altogether about 200,000 wild wolves still roam the earth, but there are more than 400 million domesticated dogs.
1
The world contains 40,000 lions compared to 600 million house cats; 900,000 African buffalo versus
1.5 billion domesticated cows; 50 million penguins and 20 billion chickens.
2
Since 1970, despite growing ecological awareness, wildlife populations have halved (not that they were prospering in 1970).
3
In 1980 there were 2 billion wild birds in Europe. In 2009 only 1.6 billion were left. In the same year, Europeans raised 1.9 billion chickens for meat and eggs.
4
At present, more than 90 per cent of the large animals of the world (i.e. those weighing more than a few kilograms) are either humans or domesticated animals.

Scientists divide the history of our planet into epochs such as the Pleistocene, the Pliocene and the Miocene. Officially, we live in the Holocene epoch. Yet it may be better to call the last 70,000 years the Anthropocene epoch: the epoch of humanity. For during these millennia
Homo sapiens
became the single most important agent of change in the global ecology.
5

This is an unprecedented phenomenon. Since the appearance of life, about 4 billion years ago, never has a single species changed the global ecology all by itself. Though there had been no lack of ecological revolutions and mass-extinction events, these were not caused by the actions of a particular lizard, bat or fungus. Rather, they were caused by the workings of mighty natural forces such as climate change, tectonic plate movement, volcanic eruptions and asteroid collisions. 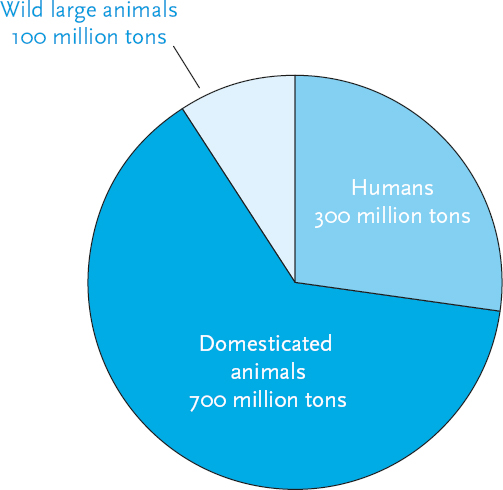 Some people fear that today we are again in mortal danger of massive volcanic eruptions or colliding asteroids. Hollywood producers make billions out of these anxieties. Yet in reality, the danger is slim. Mass extinctions occur once every many millions of years. Yes, a big asteroid will probably hit our planet sometime in the next 100 million years, but it is very unlikely to happen next Tuesday. Instead of fearing asteroids, we should fear ourselves.

For
Homo sapiens
has rewritten the rules of the game. This single ape species has managed within 70,000 years to change the global ecosystem in radical and unprecedented ways. Our impact is already on a par with that of ice ages and tectonic movements. Within a century, our impact may surpass that of the asteroid that killed off the dinosaurs 65 million years ago.

That asteroid changed the trajectory of terrestrial evolution, but not its fundamental rules, which have remained fixed since the appearance of the first organisms 4 billion years ago. During all those aeons, whether you were a virus or a dinosaur, you evolved according to the unchanging principles of natural selection. In addition, no matter what strange and bizarre shapes life adopted, it remained confined to the organic realm – whether a cactus or a whale, you were made of organic compounds. Now humankind is poised to replace natural selection with intelligent design, and to extend life from the organic realm into the inorganic.

Even if we leave aside these future prospects and only look back on the last 70,000 years, it is evident that the Anthropocene has altered the world in unprecedented ways. Asteroids, plate tectonics and climate change may have impacted organisms all over the globe, but their influence differed from one area to another. The planet never constituted a single ecosystem; rather, it was a collection of many loosely connected ecosystems. When tectonic movements joined North America with South America it led to the
extinction of most South American marsupials, but had no detrimental effect on the Australian kangaroo. When the last ice age reached its peak 20,000 years ago, jellyfish in the Persian Gulf and jellyfish in Tokyo Bay both had to adapt to the new climate. Yet since there was no connection between the two populations, each reacted in a different way, evolving in distinct directions.

In contrast, Sapiens broke the barriers that had separated the globe into independent ecological zones. In the Anthropocene, the planet became for the first time a single ecological unit. Australia, Europe and America continued to have different climates and topographies, yet humans caused organisms from throughout the world to mingle on a regular basis, irrespective of distance and geography. What began as a trickle of wooden boats has turned into a torrent of aeroplanes, oil tankers and giant cargo ships that criss-cross every ocean and bind every island and continent. Consequently the ecology of, say, Australia can no longer be understood without taking into account the European mammals or American microorganisms that flood its shores and deserts. Sheep, wheat, rats and flu viruses that humans brought to Australia during the last 300 years are today far more important to its ecology than the native kangaroos and koalas.

But the Anthropocene isn’t a novel phenomenon of the last few centuries. Already tens of thousands of years ago, when our Stone Age ancestors spread from East Africa to the four corners of the earth, they changed the flora and fauna of every continent and island on which they settled. They drove to extinction all the other human species of the world, 90 per cent of the large animals of Australia, 75 per cent of the large mammals of America and about 50 per cent of all the large land mammals of the planet – and all before they planted the first wheat field, shaped the first metal tool, wrote the first text or struck the first coin.
6

Large animals were the main victims because they were relatively few, and they bred slowly. Compare, for example, mammoths (which became extinct) to rabbits (which survived). A troop of mammoths numbered no more than a few dozen individuals, and
bred at a rate of perhaps just two youngsters per year. Hence if the local human tribe hunted just three mammoths a year, it would have been enough for deaths to outstrip births, and within a few generations the mammoths disappeared. Rabbits, in contrast, bred like rabbits. Even if humans hunted hundreds of rabbits each year, it was not enough to drive them to extinction.

Not that our ancestors planned on wiping out the mammoths; they were simply unaware of the consequences of their actions. The extinction of the mammoths and other large animals may have been swift on an evolutionary timescale, but slow and gradual in human terms. People lived no more than seventy or eighty years, whereas the extinction process took centuries. The ancient Sapiens probably failed to notice any connection between the annual mammoth hunt – in which no more than two or three mammoths were killed – and the disappearance of these furry giants. At most, a nostalgic elder might have told sceptical youngsters that ‘when I was young, mammoths were much more plentiful than these days. And so were mastodons and giant elks. And, of course, the tribal chiefs were honest, and children respected their elders.’

Anthropological and archaeological evidence indicates that archaic hunter-gatherers were probably animists: they believed that there was no essential gap separating humans from other animals. The world – i.e. the local valley and the surrounding mountain chains – belonged to all its inhabitants, and everyone followed a common set of rules. These rules involved ceaseless negotiation between all concerned beings. People talked with animals, trees and stones, as well as with fairies, demons and ghosts. Out of this web of communications emerged the values and norms that were binding on humans, elephants, oak trees and wraiths alike.
7

The animist world view still guides some hunter-gatherer communities that have survived into the modern age. One of them is the Nayaka people, who live in the tropical forests of south India.
The anthropologist Danny Naveh, who studied the Nayaka for several years, reports that when a Nayaka walking in the jungle encounters a dangerous animal such as a tiger, snake or elephant, he or she might address the animal and say: ‘You live in the forest. I too live here in the forest. You came here to eat, and I too came here to gather roots and tubers. I didn’t come to hurt you.’