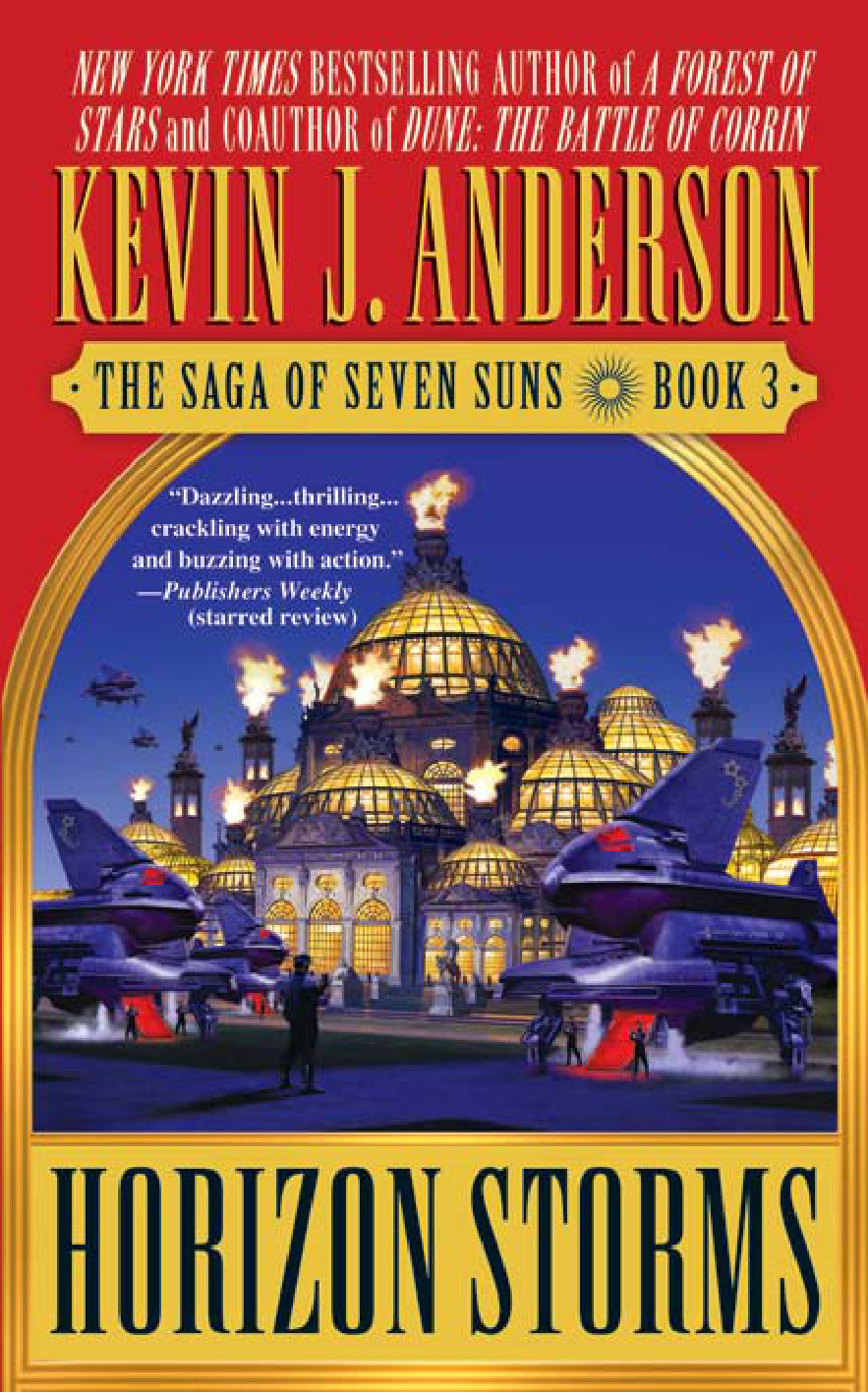 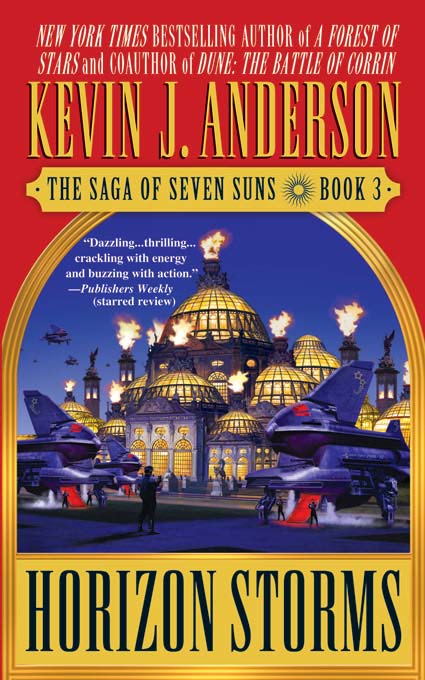 The Saga of Seven Suns

A Forest of Stars 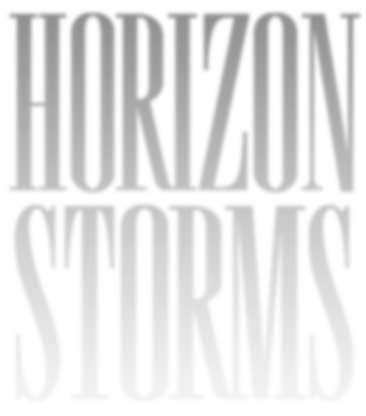 Visit our Web site at www.twbookmark.com.

The Aspect name and logo are registered trademarks of Warner Books.

who has offered his advice, ideas, and encouragement since the very beginning of my career. A long time ago, he told me to “think big” with my stories; now, with The Saga of Seven Suns already longer than Tolstoy’s War and Peace, I hope this is what he meant!

As this series gets longer and more complex, I have had to rely on the assistance of more and more people. Jaime Levine and Devi Pillai at Warner Aspect have helped to shape this series with their editorial suggestions, both large-scale and subtle; John Jarrold, Darren Nash, and Melissa Weatherill have done the same for the UK editions of these books.

Geoffrey Girard jumped into the series with both feet and sharp eyes (to use an anatomically impossible mixed metaphor) to help me minimize contradictions in the details across the volumes.

Catherine Sidor and Diane Jones at WordFire, Inc., offered many opinions and ideas in our brainstorming sessions; Catherine nearly wore the tips off of her fingers by typing the chapters as fast as I could hand her my microcassettes.

Many of the places and events were inspired by the Seven Suns artwork of Rob Teranishi and Igor Kordey, who created the visual universe for Veiled Alliances, the Seven Suns graphic novel. I am also indebted to the vision of my fabulous cover artists, Stephen Youll and Chris Moore.

My agents John Silbersack, Robert Gottlieb, and Kim Whalen at Trident Media Group have helped greatly to make this series a success both in the U.S. and in many languages around the world.

And, most of all, my wife, Rebecca Moesta, spent a great deal of time and mental energy to work with me on Horizon Storms from the outline, through drafts, all the way to the final manuscript. Her insight, as well as her patience and her love, have made this the best book possible.

For the first test of the Klikiss Torch—a device discovered in the ruins of the ancient alien Klikiss civilization—the Terran Hanseatic League (the Hansa) ignited a gas-giant planet, creating a small sun. The Hansa’s suave CHAIRMAN BASIL WENCESLAS intended to terraform the gas giant’s frozen moons into new colonies. Humanity had spread across many available worlds under the benevolent but reticent watch of the alien Ildiran Empire and its godlike leader, the MAGE-IMPERATOR. The Ildirans, represented by their Solar Navy commander, ADAR KORI’NH, were skeptical about the Torch project, but came to observe.

When the gas planet was ignited, instant reports were transmitted around the galaxy by BENETO, a “green priest” from the forested planet Theroc who had a symbiosis with semisentient “worldtrees.” Like living telegraph stations, green priests provide the only form of instant communication across vast distances through the forest network. Back on Earth, OLD KING FREDERICK, a glamorous figurehead ruler, led a celebration of the successful test.

Unknown to anyone, though, this and many gas planets were inhabited by a powerful alien species, the hydrogues. The Hansa had just destroyed one of their populous worlds and unwittingly declared war on an entire hidden empire.

JORA’H, welcomed the human REYNALD, Beneto’s brother and heir to the throne of Theroc. As a token of friendship, Jora’h invited Reynald to send ix

On his way home, Reynald met in space with the Roamers, fiercely independent space gypsies led by old SPEAKER JHY OKIAH and her beautiful protégée CESCA PERONI. Since both the Roamers and Theroc were technically independent of the Terran Hanseatic League, Reynald discussed a possible alliance, even suggesting marriage with Cesca, but she was already betrothed to a skyminer, ROSS TAMBLYN (while secretly in love with his brother JESS).

The merchant woman RLINDA KETT came to Theroc in the Voracious Curiosity, hoping to open trade between Theroc and the Hansa. She was supported by ambitious SAREIN, sister to Reynald and Beneto, but MOTHER ALEXA and FATHER IDRISS were happy with their isolation on Theroc. Rlinda agreed to deliver two green priests—old OTEMA and bright-eyed young NIRA—to Ildira at the invitation of Prime Designate Jora’h.

On Earth, Chairman Wenceslas secretly began searching for a replacement for King Frederick. Basil’s henchmen kidnapped a scamp, RAY-MOND AGUERRA, then staged a terrible fire in his dwelling, killing his mother and three brothers, leaving no evidence. The Hansa then altered the young man’s appearance, told him he was now “Prince Peter,” and began brainwashing him, using the Teacher “compy” (a companion robot) OX to instruct him in his new role.

After the success of the Klikiss Torch, the archaeologists who had discovered the technology, MARGARET and LOUIS COLICOS, began a new excavation on the desert planet of Rheindic Co, where ancient Klikiss cities remained untouched. The only functional remnants of the alien civilization, their hulking beetlelike robots, explained that their memories had been erased long ago. To learn more about their own past, three of these antique robots accompanied the Colicoses to the excavation site. The archaeology team also included a compy, DD, and a green priest. While Louis studied the ruins, Margaret worked to decipher Klikiss hieroglyphics in hopes of finding answers.

Meanwhile, angered by their near genocide, the hydrogues began to attack human facilities around gas giants. One of their first targets was a skymine—a huge cloudtop facility that skimmed gas giants for ekti, vital stardrive fuel—owned by Cesca’s fiancé, Ross Tamblyn. Roamers and their

skymines are the main suppliers of ekti to the Hansa and the Ildiran Empire. The hydrogues also destroyed the space station left to observe the new sun at the Klikiss Torch site—never demanding terms, never showing mercy. These unexpected attacks stunned both the Hansa and the Roamers. Chairman Wenceslas met with the commander of the Earth Defense Forces (EDF), gruff GENERAL KURT LANYAN, to discuss the threat.

heard the call and ran off to join the military, taking her compy EA and leaving her brother Jess in charge of the family water mines. Although Ross’s death left Jess Tamblyn and Cesca Peroni free to profess their love, they couldn’t bring themselves to take advantage of the tragic situation for personal gain.

Meanwhile, Raymond Aguerra continued training to become the next King, watched over by OX. At first he enjoyed the change from the rough streets to the opulent Palace, but soon he began to resent the rigid control imposed upon him. To his horror, he discovered that the Hansa had arranged the deaths of his family.

On Ildira, the green priest Nira spent a great deal of time with Prime Designate Jora’h, who was destined to become the next Ildiran leader.

Though he had many assigned mates, he genuinely fell in love with Nira.

Another son of the Mage-Imperator, the grim and intense DOBRO DESIGNATE UDRU’H, interrogated Nira about her telepathic potential as a green priest, then reported to the Mage-Imperator about secret Ildiran breeding experiments on the planet Dobro. Udru’h suggested that Nira might have the DNA potential they needed for the breeding project.

Digging through supposedly perfect and indisputable records of their past, an Ildiran historian uncovered documents proving that the hydrogues had appeared long ago in a previous war, but that all mention of the conflict had been censored from the Saga of Seven Suns. Before he could reveal his shocking discovery, the Mage-Imperator killed him, saying, “I wanted it kept secret.”

from the clouds to destroy the ekti facility, the Solar Navy engaged in a furious battle. Although hydrogue weaponry proved far superior, one Ildiran subcommander crashed his battleship into the nearest sphere, destroying it and giving the Solar Navy time to retreat with the rescued skyminers. In the thousands of years chronicled in the Saga of Seven Suns, no Ildiran had ever experienced such a terrible and humiliating defeat.

On Earth, the EDF built new ships and commandeered civilian spacecraft to mount a defense against further hydrogue attacks. Rlinda Kett was forced to surrender all of her merchant ships to the war effort, except for the Voracious Curiosity. Newly enlisted Tasia Tamblyn excelled in military training, besting spoiled-brat Earth recruits. Her particular bane was PATRICK FITZPATRICK III; her closest friend was fellow trainee ROBB

In an uproar after the repeated hydrogue attacks, many Roamers ceased all skymining, but Jess Tamblyn decided to strike the enemy aliens himself. He gathered loyal workers and went to where the hydrogues had destroyed his brother Ross’s skymine. They sent giant comets plummeting down to batter the gas planet with the force of atomic warheads.

Upon learning that the Ildirans had also been attacked by hydrogues, Chairman Wenceslas went to meet with the Mage-Imperator to propose an alliance. The hydrogues had neither acknowledged nor responded to requests for negotiation. While Basil was away on Ildira, however, a giant warglobe appeared at Earth and a hydrogue emissary demanded to speak with flustered and incompetent King Frederick. Contained within a pressure vessel, the alien emissary informed the King that the Klikiss Torch had annihilated a hydrogue planet, slaughtering millions of their people. Frederick apologized for the inadvertent genocide, but the hydrogue demanded that all skymining cease. This would mean no ekti fuel for the Ildiran stardrive, the only viable method of space travel. As Frederick pleaded with him, the hydrogue emissary detonated his containment tank, killing the King and all observers in the Throne Hall.

Basil rushed back to Earth and told royal trainee Raymond that “King Peter” must take the throne immediately. Peter gave a carefully scripted speech, defying the hydrogue ultimatum and declaring that humans would take the fuel necessary for their survival. He dispatched a battle group, including Tasia Tamblyn and Robb Brindle, along with commercial ekti har-

The Kill Zone by David Hagberg
Lost in London by Callaghan, Cindy
Vacation with my Stepbrother: A Forbidden Stepbrother Romance by Madison, Tiffany
Summer Snow by Pawel, Rebecca
The Last Days by Scott Westerfeld
Bugging Out by Noah Mann
California Bored and Tourism by Rhonda Laurel
in0 by Unknown
Assassin's Creed: Unity by Oliver Bowden
A Knight's Vow by Lindsay Townsend