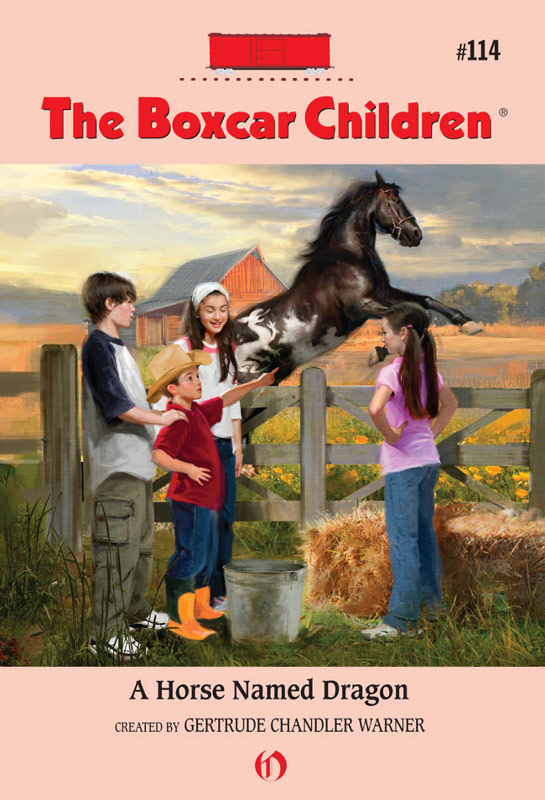 Six-year-old Benny Alden bolted awake in the middle of the night. Where was he? He sat straight up in bed. His heart drummed.

This wasn’t his bed!

Far away, a horse whinnied. Benny breathed a deep sigh. Now he remembered. He was on vacation with his brother and sisters at the Dare to Dream Ranch. This was their first night sleeping in the bunkhouse. But—what woke him?

Benny slid out of bed, careful not to wake his big brother Henry asleep in the top bunk. He tiptoed past his sisters. Twelve-year-old Jessie’s arm flopped over the side of the top bunk. In the bunk below, ten-year-old Violet cuddled her stuffed panda. The girls did not stir as Benny tiptoed past.

At the window, Benny pulled aside the curtain and peered out. The sliver of moon gave off little light. Benny could barely see the large barn in the distance. Far away, the horse whinnied again. But Benny could not see any horses. He listened to the night sounds. Crickets chirruped. Soft winds creaked the rocking chairs on the bunkhouse porch.

Wait! Were those voices? Whispers? Benny listened hard. A sudden gust of wind rustled the trees. He didn’t hear any more voices. Maybe what he’d heard was just the sound of the wind.

The horse whinnied a third time. Benny heard a faint clip-clop of hooves. A truck engine started up. He listened as the truck drove away. Then, silence.

Benny yawned, then yawned again. He’d better get some sleep. Tomorrow was the Alden children’s first full day working and playing at the Dare to Dream Ranch.

Fourteen-year-old Henry woke at dawn. He jumped down from his bunk and looked out the window. Far across the ranch, he saw cowboys on horseback. “Eeeeee-haaaa!” came their faint shouts. “Eeeeee-haaaa!”

Henry ran to the bunks. “Wake up,” he said, gently shaking his sleeping brother and sisters. “The wranglers are bringing the horses in from the pasture.”

The excited children quickly washed, then dressed in jeans and T-shirts. They put on cowboy hats to shade them from the sun and cowboy boots for riding horses. Then they ran to the corral. The corral was a circle as big as a schoolyard, with a rail fence all around. The children scrambled up and sat on the top rail to watch. Wranglers on horseback called out “Eeeeee-haaaa,” as they shooed horses in.

A spirited black horse ran into the corral. It had a large white spot shaped like a dragon on its back. “Dragon!” yelled Jessie, clapping her hands. Her favorite horse looked up and shook its head.

The other children searched for their favorite horses. Their grandfather, James Alden, often brought them to the Dare to Dream Ranch to ride. He and the owner, Cookie Miller, were childhood friends. Cookie had taught the children how to ride, and the children practiced hard. Each time they came, they rode better and better.

When Cookie heard that Grandfather Alden was going away on business for a few days, she invited the children to stay at the ranch.

“You’ll have to work, just like regular ranch hands,” she told them. “But you’ll also get to ride.” The Alden children liked to work, and they
loved
to ride. “Yes!” they had said, at once.

A small white horse with black dots walked into the corral.

“Lots-o’-Dots,” called Benny. The little horse looked up and snorted. It trotted over to Benny. “He remembers me!” Benny cried. Lots-o’-Dots had been brought to the ranch a month ago. Benny was the first guest to ride him. The horse nuzzled Benny’s pocket. “You’re looking for a treat, aren’t you?” said Benny. “I’ll bring you something from breakfast.”

A powerful brown horse burst into the corral. Henry put his thumb and pinky in his mouth and blew out a short, shrill whistle. The horse whinnied and reared up on its hind legs, pawing the air. Then it pranced over.

“Hey, Lightning,” said Henry, scratching the horse behind the ears. “How are you, boy?”

Violet waited and waited, searching for her horse. “Does anyone see Daisy?”

“The horses are still coming in,” said Jessie. “Daisy will be here soon.”

But Violet was afraid Daisy was gone. Daisy was one of Dare to Dream’s “rescue horses.” These were horses rescued from all over the country. Some had wandered away from their homes. They were found sick or hungry or injured. Cookie nursed them until they were well. Then she found good families to adopt them. A year ago, a Boy Scout troop had found Daisy wandering the hills of Montana. The gray horse was skinny from hunger and hurt by a bobcat’s bites. The troop sent Daisy to the Dare to Dream Ranch. Last month, when Violet came to ride, Daisy’s wounds had healed and she’d grown nice and plump.

Violet watched the horses filling the corral. Most were regular horses, the ones ridden by wranglers and guest riders. But a few, like Daisy, were rescue horses.

“I still don’t see her,” said Violet. “Maybe she’s been adopted.” She
did
hope Daisy found a family to love and care for her. But Violet wished she might ride the gentle gray horse
one
more time.

“There,” cried Jessie, “there’s Daisy.” And coming into the corral, prancing as prettily as a princess, was Violet’s very favorite horse. “Here, Daisy. Here, girl.” Violet laughed as Daisy danced over.

Suddenly, a wrangler came riding fast around the barn. Her face looked grim under her red cowboy hat. Her horse thundered past the corral as it raced toward the main house. 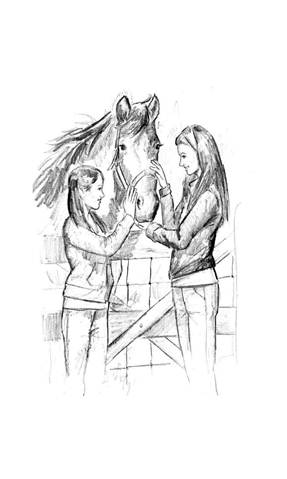 “Something’s wrong,” said Henry, jumping down from the fence. The other children followed, running full speed. By the time they reached the ranch house, the wrangler was on the front porch talking excitedly to Cookie.

“Gone,” the young woman was saying. “We must call the police. Someone stole Honey and Bunny!”

The children sat on the corral fence as Cookie and the young woman talked to the policeman. “So,” the policeman said, writing in his notebook, “you’re the new head wrangler.”

The young woman nodded. “My name’s Alyssa. I’ve been riding here at the ranch since I was a little girl. Last month, when the head wrangler retired, I applied for the job. Cookie put me in charge of caring for the horses.”

“And you’re sure two of them were stolen?” the policeman asked.

“Where else
could
they be?” she asked, her voice shrill.

Cookie patted the young woman’s shoulder. “Every morning, Alyssa brings horses from the pastures to the corral so we can check them over.” Cookie pushed a wisp of white hair off her forehead. “Some horses need shots or ointments. Others need their hooves picked, or new shoes put on.”

“And we put out oats,” said Alyssa. “Honey and Bunny love their oats. They’re usually the first ones into the corral. But not … but not today …” She sniffed and stared down at her boots.

The children felt sorry for Alyssa. The horses were her responsibility, and now two of them were missing. “Maybe,” said Violet, “they jumped over the fence.”

“Besides,” said Cookie, “Honey and Bunny wouldn’t even try to jump. They are a couple of sweet old mares who spend their days grazing and sleeping.”

The policeman scratched the back of his neck. “Well,” he said, “I do recall reading about a ring of horse thieves working in the next county. But that was a few months back. I never heard of any horses stolen from around here. Has your ranch had trouble like this before?”

The policeman flipped his notebook shut. “You should call around. Ask your neighbors to keep an eye out for your horses.” He climbed into his car. “I’ll spread the word when I have time.” He drove away down the dusty road.

“And I need to get back to my kitchen before I burn up breakfast,” said Cookie. “I’ll ring the cowbell when it’s time to come eat.”

The four Alden children sat quietly on the fence, thinking. It was well known back home in Greenfield that the children loved to solve mysteries. But they never expected to find one at the Dare to Dream Ranch.

Finally, Jessie said, “Well, if you ask me, this doesn’t make any sense at all.”

Jessie turned to her sister. “Pretend you’re a horse thief.”

“Good,” said Jessie, “you’re the thief.” Benny made a mean face. “Perfect. Now, here you come, sneaking around this ranch in the dead of night. You see a pasture filled with beautiful horses. You can steal any one of them. So, do you steal a couple of tired old mares?”

“And I’d steal the fastest and the strongest horses I could find,” said Henry. “Like Lightning and Dragon.”

They sat quietly, thinking, watching the corral full of horses. The Aldens always felt a special bond with the rescue horses on the ranch. These children also knew how it felt to be homeless. After their parents died, they had run away and lived all by themselves. One stormy night, they found an old boxcar in the woods, and soon made it their home. They lived there until Grandfather found them and brought them to live with him. Like the rescue horses on Cookie’s ranch, the children knew how hard it was to be on their own, and how wonderful it felt to find a safe and loving home.

“What’s Dragon doing here?” boomed a deep voice. A big man rode up. He wore an old straw cowboy hat. His long blond moustache curled up at the ends.

“He’s not ready,” the man snapped. “He cut his leg. Alyssa was told to keep him in out in the west pasture until it healed.”

“Who are you?” asked Henry.

“Kurt Krupnik, the new ranch manager,” the big man said. “Alyssa better learn to listen to me if she wants these horses to stay healthy.

I told Cookie that girl is too young to be head wrangler.” Then he whirled his horse around and rode away.

“Do you really think something’s wrong with Dragon?” asked Jessie. They watched Dragon walk around the corral. He didn’t limp or seem hurt. Maybe Kurt was wrong. Maybe Dragon’s leg
had
healed.

The hungry children scrambled down from the fence and joined the ranch hands and volunteers heading toward the main house. Violet was nearly at the door when she realized Benny was missing. Something was wrong—Benny was
always
first in line for food! She ran back to the corral. Benny still sat on the fence, scratching Lots-o’-Dots behind the ear.

“If I leave, someone might come and steal Lots-o’-Dots. The way they stole Honey and Bunny.”

“Don’t you worry.” An old man limped up carrying two buckets filled with oats. He looked like Grandfather with his white hair and nice smile. But this man was a little shorter and a
lot
rounder. A ragged band of bright orange feathers decorated his cowboy hat. Some feathers were bent, and some were missing. “My name’s Bucky,” he said. “I volunteer here at the ranch. And I can guarantee that Lots-o’-Dots will be right here when you finish your breakfast.”

“How do you know?” Benny asked.

“Well, now, if there’s one thing Lots-o’-Dots likes, it’s a handful of these oats.” He held a bucket out to Benny. “If you feed him some, he’ll wait around for you to comeback.”

Adam's List by Ann, Jennifer
Kate and Julia: Slave Girls of the Raj by Lindsey Brooks
One Trip Around the Sun by Roe, Amy
Learning To Fly (Fated Love Book 1) by Lauren Firminger
I Heart Robot by Suzanne Van Rooyen
Rose of No Man's Land by Michelle Tea
Sticks and Stone by Jennifer Dunne
Everafter (Kissed by an Angel) by Chandler, Elizabeth
The Dislocated Man, Part One by Larry Donnell, Tim Greaton
A Christmas Memory by Vos, Max