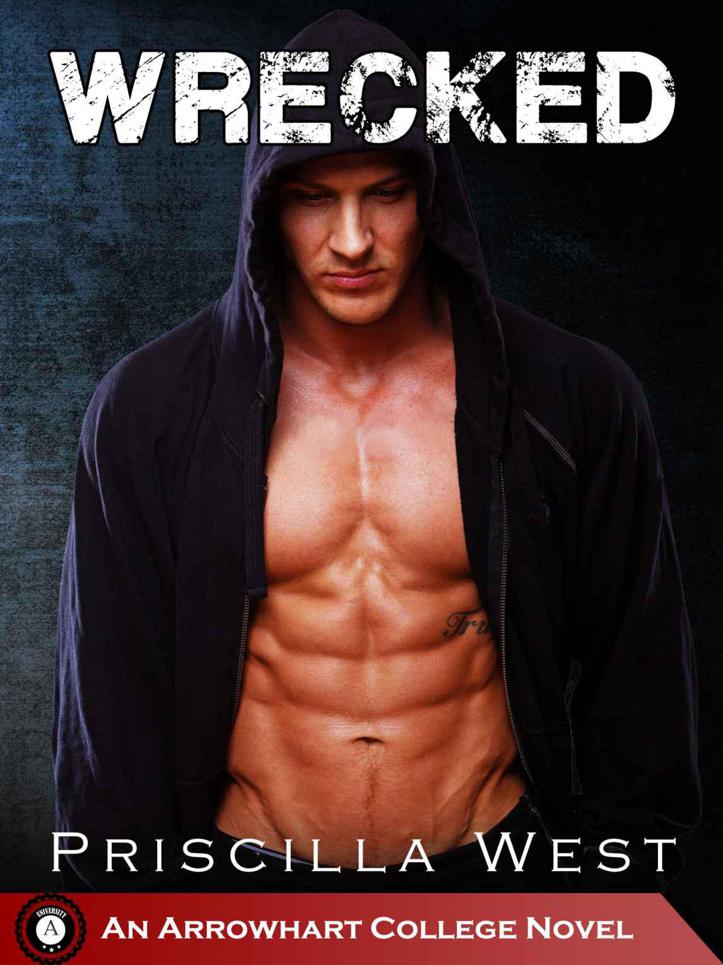 All rights reserved.
No part of this publication may be reproduced, distributed, or transmitted in
any form or by any means, including photocopying, recording, or other
electronic or mechanical methods, without the prior written permission of the
publisher, except in the case of brief quotations embodied in critical reviews
and certain other noncommercial uses permitted by copyright law.

All characters appearing in this work are
fictitious. Any resemblance to real persons, living or dead, is purely
coincidental.

Warning: This work
contains sexual content and is written for adults only (18+). All characters
depicted in this story are over 18 years of age.

Chapter One
: The
Note

There would be no happy
ending for us. He was too damaged. I was too broken. Things between us
shouldn’t have gone this far in the first place. Then this never would’ve
happened. If only I’d been stronger. If I only I hadn’t said those words, if
only we were different people—not the lost, scared and broken people that we
were . . . then we wouldn’t be in this wreck.

I was okay. Just okay. Not
good, not bad—just okay. After what happened to Mom, I answered a lot of
questions with that line.

“Lorrie,
how are you coping?” they would ask.

Or: “I’m
so sorry Lorrie, this shouldn’t have happened to a woman like your mother. How
are you dealing with things?”

Before the
trial, during the trial and after the trial, I gave that same answer. What the
hell did they expect me to say?

Sitting on
the edge of a low stone bridge spanning a narrow part of Lake Teewee, I looked
out across the dark waters, idly gazing at the old, towering trees along the
distant shore as if they somehow knew the answers I was seeking.

I dangled
my legs over the side, my snow boots almost touching the high water. The bridge
spanned over a narrow part of the half-frozen lake that eventually turned into
a stream winding through and around the west side of campus. Some of the
students liked to call the lake “Lake Peepee.” I thought it was a stupid name
at first but then someone explained that there were frequent rumors of frat
boys pissing in the lake. Whether it was true or not, the water in the lake was
still covered in a disgusting layer of green algae.

I had
finished unpacking and setting up my dorm room last night, and decided to take
a walk this morning to refamiliarize myself with the campus layout. It would be
nearly a week before classes officially started so there weren’t too many
students roaming the campus yet which made the place rather quiet.

I exhaled
deeply and my breath fogged in front of me.

After
taking three semesters off, I was back on campus again at Arrowhart College,
ready to start the Spring semester in the middle of the coldest winter ever
experienced in Studsen, Illinois. The crappy weather made the timing of my move
from my aunt’s house in Indiana back to Illinois unfortunate, but I didn’t want
to delay coming back to school.

Aunt
Caroline had suggested I take another semester off, but that was the last thing
I wanted. I wanted to feel normal again. I needed to go beyond the denial, the
anger, and the depression. The therapist had told me I was one step away from
reaching the last stage of grief, which was “acceptance”, then I could move on
with my life. She’d said this last step was the hardest for most people. For
some it takes months, others years, and the rest . . . well, they never make
it. I didn’t know which category I’d fit into; all I knew was being away from
school didn’t help me cope. If anything, it just gave me more time to dwell on
the past.

A
high-pitched squeal to my left made me jump. Frantically reaching for a
grippable stone on the bridge, I managed to find one and regain my balance,
saving myself from falling into the water. I turned toward the noise and caught
a glimpse of a black cat disappearing into the thick brush with a mouse in its
mouth. It was probably a stray trying to collect enough food to last the
remaining winter.

I wrung my
hand like a disgruntled old woman warning kids to get off her lawn. “Hey buddy!
You almost made me fall into the lake.” The cat had almost lived up to its
reputation for being unlucky.

The cat
poked its head out of a bush for a moment, looked at me curiously with its
green eyes, lost interest then vanished again.

“That’s
right. Get out of here kitty,” I said, a bit disappointed that he left. No one
else was around and I could’ve used the company.

The cat
was like most of the friends I’d made freshman year at Arrowhart; we had a
momentary connection but then we quickly went our separate ways and lost
contact. I’d only kept in touch with Daniela Stauffer, who was now going to be
one of my suitemates this semester. Maybe I’d make new friends this semester.
Thinking about that, I frowned when I imagined students’ reactions to me
telling them that I was a twenty-year-old sophomore. I could almost hear the
questions.
Did she get academic probation? Could she not afford to pay for
school?

I had good
reasons for being a first semester sophomore when I should’ve been a second
semester junior, but I’d prefer they didn’t know.

Unfortunately,
most probably
did
know—through the media covering the trial and through
campus rumors. Word tended to spread fast on a college campus with only a few
thousand students.

I sighed
heavily then inhaled through my mouth. The crisp winter air entering my lungs
felt refreshing. The thick puffer jacket I wore kept my chest warm, but the
cold stone beneath me sucked the heat from my bottom through my jeans, leaving
my ass slightly numb.

My ass
matched my feelings. I was numb when I should’ve been excited. Wasn’t it
supposed to feel good returning to college? To go to fun parties and meet hot
guys? To be moving on with my life again? Wasn’t that what Mom and Dad would
have wanted?

Reaching
into the inner pocket of my jacket, I pulled out a folded piece of notebook
paper. I unfolded it and stared at the black letters shakily written in cursive
by Dad. My chest grew tight and my fingers trembled but there were no tears in
my eyes as I read the letter again, for the thousandth time.

Whatever happens after this, I want you to
know that I love you and that this had nothing to do with you. Even after the
divorce, I still loved your mother. I guess you always knew that. I can only
blame myself for what happened to her. Maybe if I hadn’t worked so much, had
paid more attention to her, we would’ve never gotten divorced, and she would’ve
never met that monster.

I’m so sorry Lorrie. I’m sorry to you, and
I’m sorry to your mother. She was so beautiful. She was the best thing in my
world, and even after the divorce, I was happy to just be a part of your lives.

I know that you need me now, more than
ever, but I can’t. I just can’t Lorrie. I’m too weak. It hurts so much that
she’s no longer here. You’re the strong one Lorrie, you’ve always been strong.
Ever since you were born, you were always so strong. You have to keep going,
don’t make the same mistakes I made.

I should cry now,
I thought
.
That’s what normal
people did right? In the movies, whenever someone read their father’s suicide
note they cried afterwards. I’d cried the first hundred times I read it but now
I couldn’t cry. I couldn’t feel anything. Not even when I wanted to. It was
like there was a switch in my brain that was connected but nothing was
transmitting. No sadness, no pain, no joy. Just numbness. Was that what Dad
meant when he said I was strong? That I could numb away the pain and move on?

I dipped
the toe of my boot into the water and nudged a thick ice piece floating by.

I folded
up the note and put it back into my pocket. When I patted my jacket for my
phone to check the time, I remembered I’d left it back in my room. I should
probably head back.

A soft
gurgling drew my attention to the water beneath the bridge and I looked down. I
almost didn’t see it at first, but then I spotted it. There was a large
goldfish making slow circles under the water.

“Hey
fishy. What are you doing? Aren’t you freezing in there?”

The fish
glugged a few bubbles to the surface and I took it as a yes. It was slow but
looked alive in the bitter coldness of the water. I envied that feeling of
being alive. My ass was numb and I was numb on the inside. I wanted to feel
something. Anything. Just to know that I was still here.

I tucked
my legs beneath me and leaned over the side of the bridge, dipping my fingers
into the water. A frigid chill spiked up my arm invigorating me.

I could
still feel something.

I leaned
further over the side of the bridge so that I could reach deeper into the water.
My wiggling fingers must’ve looked like dinner because the fish approached and
started nibbling at me. The icy bite of the water made me alert and awake,
clearing the numb fuzz that I thought had settled permanently on my mind. I
pushed up the sleeve of my jacket with my other hand, before leaning further,
to plunge my arm deeper. The edge of my sleeve was getting wet but I didn’t
care. The cold had a cleansing quality, even as the tips of my fingers were
starting to lose their feeling.

I thought
about leaning further, but it was already the furthest I could go without
losing my balance. If I fell in the freezing water, I might die—there was
certainly no one around to help me. I might have been numb but I wasn’t stupid.

Something
felt odd around my shoe.

I twisted
my head and saw a black, furry creature tearing viciously at my shoelaces.

The cat
screeched and jumped three feet in the air, scaring the shit out of me. I
wanted to pull my hand out of the water, but it was too late. I flailed for a
split second, trying to grab onto the stone I’d used earlier to save myself,
but this time I missed.

I tipped
forward, losing all balance.

Then I was
underwater.

The Blue Mountains of Kabuta by Hilary Wilde
Deltora Quest #8: Return to Deltora by Emily Rodda
Wild Ones (The Lane) by Wyllys, Kristine
Still Mine by Mary Wine
More Than a Mission by Caridad Pineiro
The Coyote Under the Table/El Coyote Debajo de la Mesa by Joe Hayes
The Last Confession of Thomas Hawkins by Antonia Hodgson
My Husband's Boss (Tempt Me Harder Book 1) by Kellie Mason
Black Water Transit by Carsten Stroud
Night's Deep Hush: Reveler Series 4 by Erin Kellison