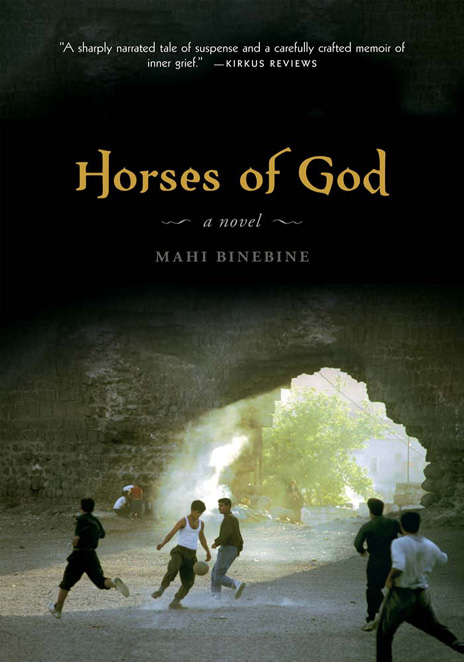 All rights reserved. No part of this book may be used or reproduced in any manner whatsoever without written permission from the publisher except in the case of brief quotations embodied in critical articles or reviews. For information, contact Tin House Books, 2617 NW Thurman St., Portland, OR 97210.

YOU MIGHT WALK
right past our part of town without ever suspecting it was there. A high, crenellated adobe wall separates it from the boulevard, where an uninterrupted stream of cars makes an unholy din. In this wall we'd hollowed clefts like arrow slits so we could freely contemplate the other world. When I was a kid our favorite game was to pour bowls of piss on to rich passersby, biting our lips as they cursed, yelled insults, and looked up at the sky. My brother Hamid was our leader; he rarely missed his target. We'd watch him do his stuff, stifling our laughter, which, seconds after the golden shower, would burst out uncontrollably. We'd be jubilant, rolling around in the dust like puppies. Ever since the day a stone thrown by a furious victim hit my head, I was never quite the same. At least that's what everyone around me thought; that's
what had been drummed into me nonstop since I was little. I ended up accepting it and, eventually, quite liking it. All my escapades were half forgiven on account of that handicap. But I was no stupider than anyone else. In soccer, everyone will tell you, I was the slum's best goalie. My idol's name was Yachine. The legendary Yachine. I never saw him in action but there were so many stories . . . Some claimed he could stop a ball fired from a Krupp cannon, others that his body defied the laws of gravity. People even said that his premature death had been plotted by international strikers, put to shame by his talent. Whatever the truth, I wanted to be Yachine or nothing. So I changed my name to his. Yemma didn't like it, but since I refused to answer to the name for which a lamb had been sacrificed in front of our shack, she'd had to get used to it. Only my father, who'd always been old and stubborn, kept on with the outdated “Moh.” You're not going to get very far with a name like that.

In any case, I didn't hang around in life too long because there wasn't a lot to do. And I have to say right now: I'm not sorry to be done with it. I don't have the slightest nostalgia for the eighteen or so years of misery that were my lot. Although at first, in the days straight after my death, I'd have found it hard to say no to those biscuits my mother used to make with salty butter, her honey cakes or spiced coffee. Still, those earthly needs
slowly faded and even the memory of them eventually vanished too, eroded by my new status as a ghost. If in the odd moment of weakness I still think of Yemma stroking me as she rooted around in my hair, getting rid of the nits, I say to myself: “Get a grip, Yachine, your head's been blown to smithereens. Where could the nits go burrowing if you no longer have any hair?” No, I'm glad to be a long way from the corrugated iron, the cold, the sewers spilling their guts, and all the putrid stench of my childhood. I won't describe where I am now because I don't know myself. All I can say is that I'm reduced to an entity that, to use the language of down below, I'll call consciousness: that is to say, the restful outcome of myriad lucid thoughts. Not the dark, narrow ones that dogged my brief existence, but thoughts with aspects that are infinite, iridescent, sometimes dazzling.

LONG BEFORE EVERYONE
had a satellite dish, ingenious contraptions made out of couscous pots sprouted over all the roofs of our neighborhood, enabling us to watch foreign programs. To be honest, the images were blurred, almost scrambled, but you could just about see the outlines and the sound was more or less okay. We'd mostly watch the Spanish and Portuguese channels for the soccer, German for the porn (the poor image quality at least made the brutish look erotic), and the Arab channels for our daily dose of the Israeli-Palestinian conflict and the evil doings of the man-eating West. Since color TV was beyond the reach of most of His Majesty's subjects, we had a strip of colored plastic film that we stuck over the screen: three horizontal bands, azure on top, poetically evoking the sky, pale yellow in the middle, and grass green below.
This meant we saw the flickering images through multicolored plastic, which was often scratched and grubby. Also, because my father was deaf, we'd turn up the volume so loud that we'd have to watch the same channel as our neighbors so as not to be disruptive. In spite of all that, young and old would come together every evening around this magical screen, brazenly open to the wonders of the world.

If Casablanca had had a record book, Yemma would have been right up there: fourteen pregnancies in fourteen years! Can anyone top that? And eleven had lived. All boys. If the twins hadn't been struck down by meningitis at the age of three, we could have made up the soccer team all by ourselves: the Stars of Sidi Moumen, pride and joy of the neighborhood. We'd have made all the teams from the other slums quake. And Yachine, yours truly, regular goalkeeper, would have been its unbreachable defense. We'd have been so famous that even people from the rich parts of town would have risked climbing the wall to come and cheer us on. Who knows, the town dump might have become a real soccer field. Perhaps not with turf like the stadiums of the big teams, but at least an open space, rid of the revolting mounds of rubbish. And as for the people that make their living from them, well, tough; they'd just have to go scavenging elsewhere. It's not as if there's a shortage of dumps. That said, poor as we
were, Yemma banned us from working at the dump. There was no escaping the sniffing session when we got home at night. If you stank of rubbish, you were in for it. Our mother had made a formidable whip that she kept hanging by the door. And as for bringing anything home, no chance. She delighted in destroying it then and there. Still, we'd find stuff at the dump. Hamid was the only one who dared to defy our mother. Incapable of doing without hashish, he'd resigned himself to paying the price each day. And though he was careful to wash himself all over at the street pump, he'd still reek of his crime. Yemma could thrash him all she liked, he carried on. He had to have his fix, his expensive tobacco, and his rolling papers.

I can modestly say that of all the scavengers at the dump, Hamid was the most gifted. He had almost a sixth sense for unearthing the rare pearl. Combined with precocious intelligence, this animal instinct instantly placed him ahead of the pack. He knew exactly which district any particular garbage truck came from, and he didn't stint on bribes for the drivers in return for information. So, rather than foraging blindly like most people, he'd search methodically. By the age of twelve, he was already employing one kid to clean and repair his booty and another to sell it off at the flea market at a price he'd set in advance. I was fascinated by my brother Hamid. He protected me. And spoiled me. He
could turn violent if anyone started on me. One evening, I remember it like yesterday, he beat to death a neighbor who'd dragged me over toward the cesspools, way behind the dump. Though we'd only been playing, imitating Bollywood heroes. Morad was having a laugh, nibbling my ears, whispering weird words. His rough tongue gave me the shivers. He'd pinned my hands to the ground to stop me from running away. His curly hair smelled of olive oil. And tasted like it too; my mouth was full of it. Morad's tickling was making me laugh so much I didn't hear Hamid, who suddenly appeared, like a ghost. But instead of throwing himself into the fray he stood still, stiff as a rod. I didn't notice the stone he was holding, because the night was black. When Morad cried out, I thought he was still singing. I don't know why Hamid struck him so hard, on the head. The blood started gushing down his face and I was so scared I wanted to scream. I couldn't. My screams stayed inside me, as if they'd been sucked in by my belly. I tried opening my mouth; nothing came out. In a daze, I looked at my brother, who was trembling, his fists clenched. I knew I'd get it next. Wearing those lethal boots with the crampons he'd picked up on the dump, he kicked my ass, calling me a fag and other insults I don't even dare repeat. I told him that we were only playing, we hadn't hurt anyone. But he was wild with rage. It was as if his anger, amplified by the darkness, was a battalion
of devils brandishing their pitchforks, ready to stab me. My brother could sometimes be unfair, it's true. And yet he loved me; he'd have done anything for me. I was angry with him about Morad, but that's all in the past now.

I never went near the cesspools again. Obviously I couldn't hang out with Morad any longer, because he hadn't survived my brother's attack. He'd been buried in the dump. Hamid knew every nook and cranny of it. No one went foraging on that side anymore. It was old garbage, passed a thousand times through the sieve of human despair. At first I refused to believe my friend was dead. But I ended up forgetting him. Well, not completely. The few times I let in a goal at soccer and went off to fetch the ball, I couldn't help glancing at the exact spot where my friend lay decomposing. One evening, I felt brave enough to go and check if he was still there. On top of the mound I'd located thanks to the white carcass of a dog shriveled by the scorching heat, I used a stick to scrape away the sludge he'd been buried in. Maybe Morad had survived my brother's assault after all. Perhaps he'd just pretended to be dead so Hamid would stop hitting him, and had stood up right after we'd gone and left the slum. Perhaps he'd disappeared purely to give us a fright, to punish us. So I dug, first with the stick and then with my hands, which was easier. The natural stench of the dump overpowered that of the corpse. When I saw a
finger sticking out of the mud between two food cans, I ran off as fast as I could, not turning round, because I thought Morad's ghost was after me. I only stopped when I reached Omar the coalman's shop. A paraffin lamp made a halo of light round the hunched figures of ex-soldiers who congregated there to play checkers. My heart was thudding, I was trembling all over. Just thinking about it would give me goose bumps if I still inhabited my skin.