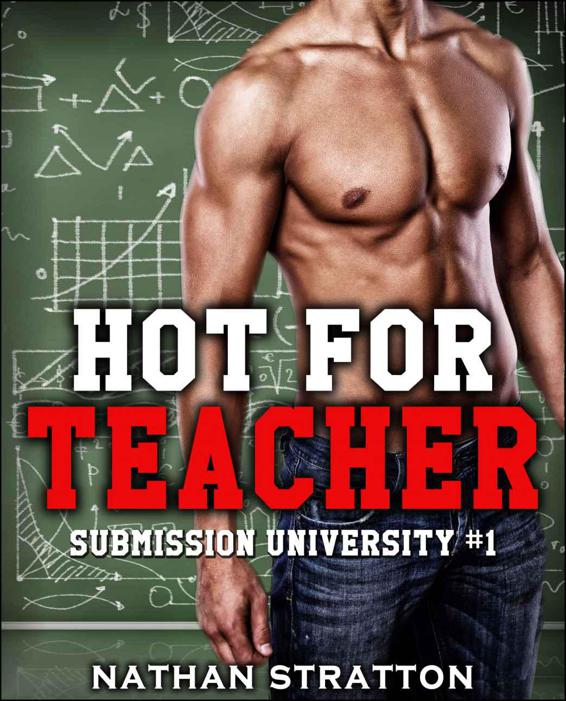 Reproduction of this work prohibited unless the author grants permission.

If you’ve purchased this book, please consider leaving a review after reading it.

I read all my reviews, and I take feedback very seriously. Thank you.

The moment I laid eyes on him, I knew he was going to be trouble.

He was just my type: tall and broad-shouldered, with dark, probing eyes and a no-nonsense jawline. His shoulder-length brown hair and tortoise-shell glasses gave him the look of an academic, but if you saw him on the subway you might mistake him for an actor. I’d peg him at maybe 35 or 36 – and I couldn’t help but take a peek at his ring finger, which to my delighted surprise had no ring on it. He wasn’t conventionally “hot” in the sense of someone you’d see in a magazine, but I found him devastatingly handsome. It wasn’t so much because of his looks, but rather, something in the way he carried himself. Just from the way he walked, I got a sense of his personality: a deep, thoughtful intellect, unshakeable self-confidence, and
zero
tolerance for bullshit.

I never stood a chance.

He strode up to the front of the auditorium and swung his briefcase onto the podium, not bothering to open it. I was watching him intently, but most of the class was still caught up in laughter and idle chit-chat, not noticing his entrance yet. He took a moment to scan the room, looking out over his audience like a judge surveying the courtroom. As he looked in my direction, his eyes met mine briefly. I blushed and gave him a shy half-smile, caught off-guard by his sudden attention. He didn’t smile back. Embarrassed, I looked down at my notebook and pretended to write something on the open page, not daring to look back up at him.
Nice going, April,
I scolded myself.
Class hasn’t even started, and you’ve already managed to be awkward. Just brilliant.

My head was still buried in my notebook when he began to speak.

“All right, enough,” he said, in a commanding voice that shut the room up in an instant. His voice carried through the auditorium without any apparent strain on his part. It was deep and sonorous, and grabbed your attention immediately. He paused a moment, waiting to speak until the class fell completely silent. I peeked back up at him, and realized he was looking straight at me – and this time, he smiled.
Oh, fuck,
I said to myself, blushing again.

“I’m Professor Stone,” he said in an impassive voice that suggested he’d made this speech many times in the past. “And this is Psychology 156: Power Dynamics. If you’re in the wrong classroom, now would be a good time to leave.” A few scattered laughs arose from the audience, but he seemed serious, and he waited a moment before continuing.

He stepped away from the podium, striding closer to the rows of students as he spoke. “No? We’re all supposed to be here? Good. You may change your mind before the hour’s over.” Another small laugh rippled through the room. He had that dry sense of humor so common among professors, which I assume comes from years of teaching college students. He was clearly in his element here, comfortable in the spotlight. I’d always been incredibly nervous when speaking in public, and I admired anyone who could do it naturally. That’s partly why I signed up for this class. I wasn’t exactly sure what “power dynamics” meant, but the class sounded interesting, and I hoped that I’d be able to gain a little more self-confidence out of it.

I was returning to college after taking a few years off – well, okay, more than a few. I’d tried working part-time to pay my tuition, but eventually it just gotten too difficult to juggle work and school. I’d been an art history major, and my dream had always been to work in a museum – but of course, no museum wanted to hire a 20-year-old with two years of schooling. So I’d gotten a job as a technical writer for an engineering company, and spent three years drafting operating manuals for manufacturing equipment. I’d hated every single minute of it.

So here I was, back in college at age 26, ready to go for Round Two of my college education – and I was scared to death.

“I’m going to be straight with you,” Professor Stone continued, addressing the room. “This class is tough. I’m a strict grader, and I expect a lot out of my students. You’ll see soon enough what I mean, but suffice to say that if you’re looking for an easy A, you really
are
in the wrong place.” He looked out over the audience, as if searching for anyone who seemed like a slacker. Reflexively, I sat up a little straighter in my chair.

“Now, we’ve got a big group here,” he said, which was a definite understatement. There were at least 300 students in the class, and the room was completely filled. I wasn’t surprised. Professor Stone had a reputation for being one of the better lecturers at this school, and he always had high ratings from students. He wasn’t kidding about being strict, though – I’d looked through old course evaluations, and nearly all of them had mentioned what a demanding professor he was.

He walked back over to the podium. “But despite the large class size, I’m going to ask all of you to contribute during lectures. I expect all of you to do the assigned reading before class, and I’ll be calling out names at random to provide answers to my questions. And yes, in case you’re wondering, I
will
be grading you on class participation. Now, let’s see here… who should I pick on first?”

For the first time, he opened his briefcase, and pulled out what looked like the class roster. He deliberated over it for a second, and then pointed his finger at a random spot on the page, reading off the name it landed on. “David Fisher?” he said, squinting inquisitively into the audience.

Somewhere near the back came a bored-sounding voice. “Here.”

I turned to look at the student who’d spoken – he looked like your typical frat-boy slacker, slouched down in his chair with a baseball cap pulled low over his forehead. It was 11:00 in the morning, but he appeared to have just woken up. He couldn't have been more than 19 years old, and to my eyes he looked like a spoiled, overgrown baby. I could only imagine what Professor Stone thought of him. I looked back to the professor now, curious to see what he’d say next.

“Mr. Fisher, can you please tell the class what the term ‘power dynamics’ means to you?”

The student smirked sarcastically.
This should be good,
I muttered to myself.

“It’s like the, uh… dynamics, of, um… power?” he said, in a lazy drawl. The class tittered again, and he broke into a smart-alecky grin.

“Dazzling,” Professor Stone replied flatly. “Keep up that attitude, David, it will take you far. Let’s try again – hopefully, someone with a brain this time.”

David’s grin faded. Now, the class was laughing
at
him, rather than with him. I smiled inwardly; I was glad Professor Stone had taken the kid down a notch. But my smile, too, faded in the next instant, as I head my name being called.

My cheeks burned; my stomach leapt up to my throat. I raised my hand silently, too flustered to speak. Professor Stone looked around the room, not seeing my hand. “April Greiss? Are you with us this morning?”

“…Here,” I squeaked, in a voice that wouldn’t have been audible if the class
room hadn’t been so silent. I felt three hundred heads turn towards me, and three hundred pairs of eyes burning holes into my skin. But when Professor Stone locked eyes with mine, all the rest of the students faded out of my consciousness. It was like we were the only two people in the room.

“Hello, April,” he said, in a pleasant tone that took me by surprise. He smiled warmly. “And how are you today?”

“Hi,” I gulped. “Fine.” I knew he could tell I was nervous, and I was so thankful that he seemed sensitive to my anxiousness. The stern tone he’d taken with David was gone now, and he was looking at me with a kind expression on his face. Something about the way he looked at me made me calm down a bit, despite the discomfort of the situation. He stepped closer again, away from the podium, his voice dropping in volume as he approached me.

“Could you tell me, please, April, what ‘power dynamics’ means to you?” he asked, in a gentle tone.

I hesitated. “Well, I’m… not really sure,” I began. “I mean, that’s kind of what I wanted to learn in the class.” A hush had fallen over the room; no one was laughing now. It was an awkward silence. I was sure I knew what people were thinking:
What’s she doing here? She’s too old to be in college.
I took a deep, quavering breath, staring straight ahead and not letting my eyes leave Professor Stone’s.

“That’s good,” he said. “It’s a good start. I imagine that’s why we’re all here – to learn. Expect for Mr. Fisher, perhaps.” More laughter. “But if you had to take a wild guess, April, just from the words themselves, what do you think they might mean?”

I exhaled slowly, trying to calm my jangling nerves. “Well… I guess it would refer to how one person can take control over a situation, whereas maybe another person might not have that same control. And what the psychology of that phenomenon is, and why some people are able to do that.” I threw up my hands in a shrug. He nodded thoughtfully as I spoke, but didn’t say anything. The moment dragged on uncomfortably, and his silence compelled me to keep speaking.

A Pirate's Tale: The Only Solution Is Retribution by Saxon Andrew
The Fell Good Flue by Miller, Robin
Principles of Love by Emily Franklin
Tomb of the Lost by Noyce, Julian
This Book is Gay by James Dawson
Ride with Me by Ryan Michele, Chelsea Camaron
American Chica by Marie Arana
Super in the City by Daphne Uviller
Love in the Years of Lunacy by Mandy Sayer
Mosquito by Roma Tearne