Read Hot For You Online 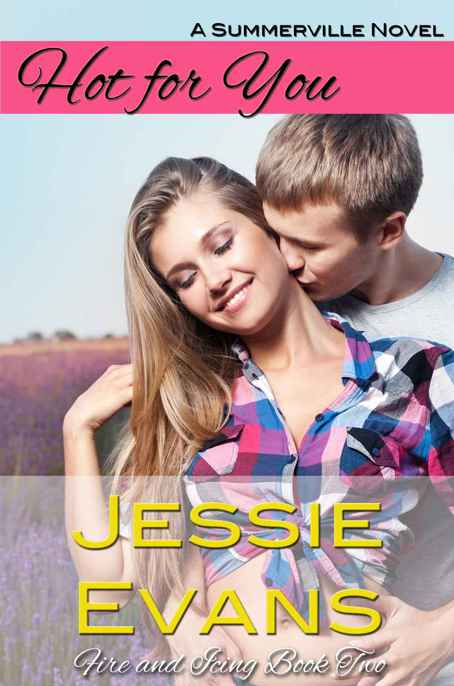 Please enjoy the following excerpt of SWEET TO YOU, available February 5th, 2014:

Too hot to handle…

Faith Miller has faith in two things—her surrogate firehouse family, and her own two hands—and she needs a man in her life like a fish needs a bicycle. Growing up watching her mom get used and discarded by one deadbeat boyfriend after another has left Faith jaded, and determined not to fall into the same trap. But when Mick Whitehouse moves back to Summerville, Faith’s happy, single life is turned upside down. The hunky carpenter is a far cry from the little boy she used to wrestle with on the playground in elementary school. Mick’s all grown up, tempting as sugar coated sin, and determined to seduce Faith into forgetting all her rules.

One kiss under the mistletoe and Mick Whitehouse knows that he wants Faith Miller. Bad. After years of lukewarm relationships with the wrong kind of girls, Mick is powerfully drawn to Summerville’s only female firefighter, and determined not to let her push him away. Beneath Faith’s tough exterior is a heart of gold, and the chemistry between them is four-alarm hot. But just as he convinces Summerville’s most confirmed bachelorette to take a chance on love, an old girlfriend waltzes into town and drops a bombshell in Mick’s lap.

As Faith and Mick come to terms with the shocking news, Faith must choose: let fear of repeating her mother’s mistakes send her running, or have faith in the man she’s come to love?

BETTING ON YOU
(Always a Bridesmaid Book One)

WILD FOR YOU
(Always a Bridesmaid Book Three)

MELT WITH YOU
(Fire and Icing Book One)

HOT FOR YOU
(Fire and Icing Book Two)

SWEET TO YOU
(Fire and Icing Book Three)

PERFECT FOR YOU
(Fire and Icing Book Four-Short Story)

This book may not be reproduced or used in whole or in part by any means existing without written permission from the author. This book is a work of fiction and any resemblance to persons, living or dead, or places, events or locales is purely coincidental. The characters are productions of the author’s imagination and used fictitiously. Cover image by freya-photographer for Shutterstock. Cover design by Bootstrap Designs. Editing by Edited Ever After Editorial.

Mick Whitehouse had it bad. So bad that not even a gorgeous redhead with big, blue eyes, legs for miles, and a dress so low-cut it practically offered a hand-written, engraved invitation to stare at her cleavage could make him stop thinking about the girl who’d walked away.

After they’d kissed in the garden at the Fireman’s Ball, Faith Miller had broken a short distance sprint record in her hurry to get away from him. And then the next morning, while Mick was still in bed, dreaming about her sinfully addictive lips, Summerville’s only female firefighter had been splitting town. She’d taken two weeks vacation—an unprecedented occurrence, according to her boss, and Mick’s sister’s fiancé, Jake—and vanished.

Mick had no idea where she’d gone. He only knew he couldn’t stop thinking about her and the night he’d held her beneath the mistletoe. Faith had felt so perfect in his arms and responded to his kiss with such unrestrained passion that for a few, blissful minutes she’d banished the memory of his last girlfriend from his mind—a feat Mick had been trying, and failing, to accomplish since moving home eight months ago.

Mick craved that forgetfulness even more than he craved the way Faith made his blood rush and body ache. He wanted to cover her mouth with his, pull her tight against him, and disappear into the heat they generated together.

He wanted Faith, and no other girl would do.

He’d tried to forget her. He really had. First with Betsy, then Therese, and now, Nina…whose chest had to be in danger of frostbite in that tiny blue dress with only a light sweater pulled around her shoulders. Why wasn’t she wearing more clothes? At the very least, she should have on a winter coat.

Wishing a hot girl in a revealing dress was more covered up. What is
wrong
with you?

“Thanks for coming out,” Mick said, smiling at Nina, ignoring his caustic inner voice.

There was nothing wrong with him, nothing a date or four with Faith couldn’t cure, anyway. If she hadn’t run off, he could have already convinced her to go out with him and be halfway to being over her by now. He didn’t want a long-term relationship or the associated angst; he just wanted to get Faith out of his system.

“Thanks for dinner,” Nina said as they stopped in front of Icing
,
the bakery Mick’s older sisters had opened on Main Street. “I had so much fun tonight.”

“Me too,” Mick said, fishing for his keys in his pocket, making a mental note to touch up the paint around the door the next day, after he finished the kitchen remodel he was working on south of town.

The bakery had only been open a week, but it was already a Summerville hot spot and had the chipped paint to prove it. Almost every morning, there was a line out the door as people queued up to get their favorite cookies, pastries, bread, and cakes before Icing
sold out for the day. Last Saturday had been the worst.

By tomorrow morning at eight, there would be people milling around outside, visiting with each other as they waited for the shop to open, making way too much noise for anyone to sleep in.

Which was as good a reason as any to end this date early.

Mick yawned pointedly before pulling Nina into his chest for a quick—platonic—hug. “See you at the New Year’s Eve party on Sunday. Drive safe.”

He figured that was the end of his latest failed date, but unfortunately, Nina didn’t seem to get the message.

“I could come up for a while if you want,” she said, angling herself between Mick and the door. “I’d love to see your new apartment. It sounds like fun living above a bakery.”

Mick silently cursed himself for moving out of his parents’ house, where he’d been living with his sisters while his mom and dad wintered in Florida. True, his sisters had been driving him crazy, especially when they started planning Naomi’s wedding, and the entire living room began looking like a marriage bomb had exploded, every available surface covered with wedding magazines, lace, and repulsive penis-shaped Jell-O molds for the bachelorette party. Still, he had to admit that sometimes their date-repelling qualities came in handy.

Right now, for example, he could have counted on Naomi and Maddie to scare Nina away. Not intentionally, of course. They weren’t like that. There was just something about the presence of a guy’s sisters that tended to intimidate girls—especially when one of the sisters was a famous celebrity chef. Thanks to the Sister Scare-Off Factor, Mick hadn’t been with a woman since his older siblings moved back to Summerville.

In his more rational moments, Mick told himself going without sex for two months was the reason he couldn’t get Faith out of his mind. In his less rational moments, he suspected he had a crush, a bad one, the kind that wouldn’t be banished by time, distance, or dates with otherwise perfectly desirable women.

“I don’t know, Nina,” he said, taking a step away from the door. “It’s pretty messy up there.”

“I don’t mind. I know how guys are,” she said in a flirtatious voice.

A few weeks ago, Mick would have been eating that flirt up with a spoon and asking for seconds, but now it only made his stomach churn.

“Seriously, I just moved in. Half my stuff is still in boxes.” He turned to glance at the firehouse across the street, silently wishing Faith were working so he might have a chance at spotting her silhouette through the second floor window. “Maybe some other time?”

“Sure. No worries,” Nina said, though she sounded disappointed. “Walk me to my car, then? I get nervous walking by myself.”

“Of course,” Mick said, though he didn’t see why she would be nervous.

He could see her car from where he stood. She had parked on Main Street, less than ten feet from his front door, under a streetlight, across from the fire station where five of Summerville’s biggest and burliest were keeping watch over the firehouse. She couldn’t be safer, and Mick couldn’t help thinking about what Faith would do in a situation like this.

Faith was as fearless as she was irresistible. Even when they were kids, Faith had been the kind who could take care of herself and anyone else who had the poor judgment to mess with her. Faith would probably tell him to scram and jog home alone down Summerville’s darkest streets, never once fearing for her safety.

The thought made Mick smile as he stopped next to Nina’s car. He knew some guys had a problem with strong, independent women, but Mick couldn’t imagine anything sexier. After the hell Bridget, his last girlfriend, put him through his senior year of college, as far as Mick was concerned—the stronger the woman, the better.

Twelve days, which meant only two more days until Faith was back in town.

“So, do you have a date for Melody’s party?” Nina asked, fidgeting with her purse instead of unlocking her car. “If not, maybe we could go together.”

Mick cringed inwardly. He hated this part. He hated letting girls down easy.

Once upon a time, it wouldn’t have been such a big deal—he and Nina had only been on one date, and they’d made each other no promises—but Bridget had taught him that breaking up wasn’t always easy to do.

The first time he’d tried to end it with his ex, she’d gotten so drunk she’d ended up in the hospital having her stomach pumped. The second time, she’d cried in front of his apartment building for four hours straight, making such a scene and getting so soaked from the rain that Mick had finally given in and gone downstairs to carry his tragically fragile ex-girlfriend up to his room.

The third time, she’d threatened to kill herself. He’d tried to get her help, but Bridget had refused to talk to the college counselors. She’d said she would slit her wrists if Mick didn’t give her another chance and, knowing Bridget the way he did, Mick believed her. Trapped, Mick had agreed to reconcile, and they’d dated the last two months of their senior year.