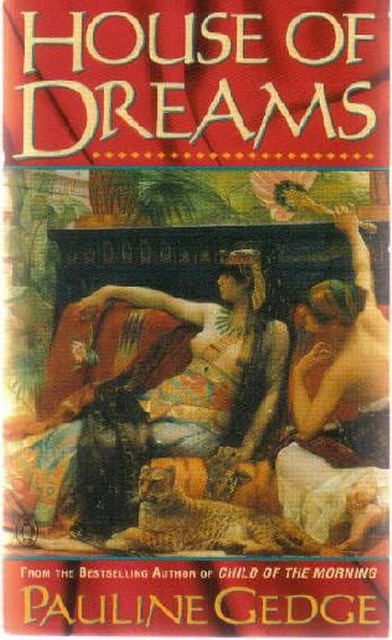 “Gedge excels at setting the scene and subtly evoking a sense of the period as she tells a timeless story of greed, love, and revenge.”

“Gedge makes the past so accessible. You can imagine walking between the pillars into a magnificent hall and watching it come alive with the smell of the fresh paint on the frescoes.”

—
The Globe and Mail

“Gedge vividly renders the exotic, sensuous world of ancient Memphis, the domestic rituals of bathing and dressing, the social ambience of superstition and spells.”

“Gedge has such a terrific feel for ancient Egypt that the reader merrily suspends disbelief and hangs on for the ride.”

“Her richly colourful descriptions … hit the reader with photographic clarity.”

“Gedge has brought Egypt alive, not just the dry and sandy Egypt we know from archaeology, but the day-to-day workings of what was one of the greatest and most beautiful kingdoms in the history of the world.”

“Each volume is a carefully devised segment, with its own distinct flavour and texture. When put together, then the skill and workmanship of the whole undertaking stand out clearly. The trilogy is one of Pauline Gedge’s most appealing works.”

“Gedge … has the magical ability to earn a reader’s suspension of disbelief.”

“Gedge draws another vivid picture of Ancient Egypt and skillfully weaves her dramatic tale of intrigue, treachery, and manipulation. Her historical novels have the ability to bring a period fully before us; it is possible to feel the heat and experience the pageantry she so ably describes.”

“Pauline Gedge’s knowledge of Egyptian history is both extensive and intimate, and has enabled her to produce an entire society of the time of Ramses II with admirable vitality. She has a sharp eye for the salient detail, and an evocative way with landscape and interiors. She can produce a mood and suggest an atmosphere … A very good story well told, and it engrosses the reader from the first page to the last.”

—
The Globe and Mail

PAULINE GEDGE
is the award-winning and bestselling author of eleven previous novels, eight of which are inspired by Egyptian history. Her first,
Child of the Morning
, won the Alberta Search-for-a-New Novelist Competition. In France, her second novel,
The Eagle and the Raven
, received the Jean Boujassy award from the Société des Gens des Lettres, and
The Twelfth Transforming
, the second of her Egyptian novels, won the Writers Guild of Alberta Best Novel of the Year Award. Her books have sold more than 250,000 copies in Canada alone; worldwide, they have sold more than six million copies and have been translated into eighteen languages. Pauline Gedge lives in Alberta.

Child of the Morning

The Eagle and the Raven

Lords of the Two Lands, Volume One

The Oasis: Lords of the Two Lands, Volume Two

The Horus Road: Lords of the Two Lands, Volume Three

Published in this edition, 2007

Except in the United States of America, this book is sold subject to the condition that it shall not, by way of trade or otherwise, be lent, re-sold, hired out, or otherwise circulated without the publisher’s prior consent in any form of binding or cover other than that in which it is published and without a similar condition including this condition being imposed on the subsequent purchaser.

MY FATHER WAS A MERCENARY
, a blond, blue-eyed giant of a man who had drifted into Egypt during the time of the troubles when the Syrian Chancellor Irsu held sway and foreigners ranged where they would, looting and raping. For a time he lingered in the Delta, taking work where he could, for he was not himself lawless and would have nothing to do with the bands of wandering predators. He herded cattle, trod grapes, sweated in the mud pits where bricks were made. Then, when our Great God Ramses’ father, Osiris Setnakht Glorified, wrested power from the filthy Syrian, my father saw his chance and joined the ranks of the infantry, marching through the towns and villages scattered along the length of the Nile, routing and pursuing the disorganized groups of pillagers, executing, and arresting, and played his part in the restoration of a Ma’at that had been enfeebled and almost eclipsed by the febrile creatures who had grappled for the throne of Egypt for years, none of whom were worthy to be called the Incarnation of the God.

Sometimes the drunken vermin my father’s troop exterminated were Libu from his own Tamahu tribe, similarly fair-haired and light of eye, who had come to the Two Lands not to enrich it nor to build an honest life but to steal and kill. They were like rogue animals, and my father destroyed them without compunction.

One burning afternoon in the month of Mesore the troop pitched their tents on the outskirts of the town of Aswat, north of holy Thebes. They were dirty, tired and hungry and there was no beer to be had. The captain sent my father and four others to requisition what stores might be available from the headman. Passing the entrance to one of the mud houses they heard a commotion within, women shrieking, men shouting. Fearing the worst, their instincts for trouble honed by many weeks of petty warfare, the members of the troop pushed into the tiny, dark hallway to be met by a crowd of half-drunk men and women swaying and clapping with delight. Someone forced a mug of beer into my father’s hand. “Give thanks! I have a son!” a voice floated over the mêlée. Drinking greedily my father wove through the throng to come face to face with a tiny, olive-skinned woman with elfin features, cradling in her bloody arms a snuffling bundle of linen. It was the midwife. It was my mother. My father took a long look at her over the rim of his mug. In his strong, placid way he weighed, considered. The people were warm in their happiness. The headman offered the troop a generous amount of grain from the town’s meagre supply. The women came to the tents and washed the soldiers’ soiled linen. Aswat was beautiful and quiet, traditional in its values, its cultivable land rich, its trees shady, and the desert beyond was unsullied.

On the day the troop was to continue its march south, my father sought the house where my mother lived with her parents and three brothers. He took with him the only valuable thing he possessed, a tiny gold scarab on a leather thong that he had found in the mud of a Delta tributary and had taken to wearing around his sinewy wrist. “I am on the business of the Good God,” he told my mother, pressing the scarab into her little brown palm, “but when I have served my time I will return. Wait for me.” And she, looking up into the mild but commanding eyes of this tall man whose hair was as golden as sunlight and whose mouth promised joys about which she had only dreamed, nodded dumbly.

He was as good as his word. Wounded twice in the year that followed, he was at last discharged from the army, paid, and allotted the three arouras of land he had asked for in the nome at Aswat. As a mercenary he held the fields on the understanding that he was available for active duty at any time and he was required to pay one-tenth of his crops into the coffers of Pharaoh, but he had what he wanted: Egyptian citizenship, a piece of land and a pretty wife who was already a part of the life of the town and who was able to make his task of winning the trust of the local people easier.

All this I learned, of course, from my mother. Their meeting, their immediate attraction for each other, the taciturn, battle-weary soldier and the wiry little village girl, was a romantic story of which I never tired. My mother’s family had been villagers at Aswat for many generations, minding their own affairs, fulfilling their religious obligations at the small temple of Wepwawet, the jackal God of War and the totem of their nome; births, marriages, deaths weaving them and their neighbours into a tight garment of simplicity and security. Of my father’s forebears she knew little for he never spoke of them. “They are Libu, from over there somewhere,” she would say, waving her arm vaguely in the direction of the west with all the indifference of the true Egyptian for anything and anyone beyond the borders. “You get your blue eyes from them, Thu. They were probably herdsmen, wanderers.” But watching the light from the oil lamp slide over the sheen of sweat on my father’s powerful shoulders and well-muscled arms as he sat cross-legged on the sandy floor of our reception room, bent over some piece of farm equipment he was mending, I doubted it. Far more likely that his ancestors had been warriors, fierce men who surrounded some barbaric Libu prince and fought for him in an endless round of tribal depredations.