Read How To Succeed in Evil Online

How To Succeed in Evil 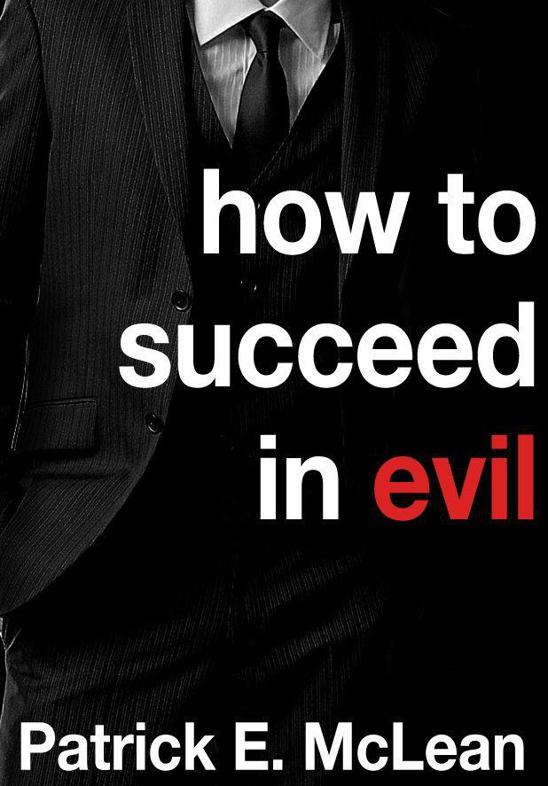 Chapter One - A Lot of Words He Doesn't Know

Chapter Three - Ghosts of Clients Past

Chapter Six - There's Money and Then There is MONEY

Chapter Seven - Excelsior on the Beach

Chapter Nine - What Do You Want Mr. Windsor?

Chapter Ten - Cindi with an 'i'

Chapter Eighteen - Nothing Right for Agnes

Chapter Twenty - Marauding Through The Night

Chapter Thirty-Two - How to Make Advantage from Avalanche

Chapter Thirty-Three - Down But Not Out

Chapter Thirty-Four - The Cromoglodon is Born

Chapter Forty-Two - The Death of Culture

Chapter Forty-Four - A Eulogy for Agnes

Chapter Forty-Nine - Get Him to Pop

Chapter Fifty - Gus in the Hospital

Chapter Fifty-Four - The Back Nine

Chapter Fifty-Six - Out of Business?

Chapter Fifty-Seven - The Trap is Baited

The World's Most Dangerous Blurb

McLean writes a comedy without punchlines by his use of completely straight-laced but hillarious characters. Unexpected twists and just straight good writing keep you entertained throughout. I approve whole-heartedly. -- Scotty Turner

This is a story of an efficiency consultant. His clients are super-villains, or (to the main character’s dismay) wanna-be-super-villains. VERY dry humor. This guy is great. Get the book and see for yourself. -- Trucker Larry

I love the story. Brilliant and entertaining and fun. I can’t say enough good things about this work. -- Green Jean

Everything you could ask for. Supremely entertaining.The characters are over the top in the best possible way. I’m so glad I found it. -- Tetwiz

How to Succeed in Evil

It’s a beautiful afternoon over Southern California. Up and down the coast, the waves are breaking well and thousands of otherwise responsible professionals have been lured by the call of the sea. The old-timers with their longboards won’t acknowledge it outside the tribe, but they whisper it around beach fires and fish taco stands. This is the best they’ve seen it. A pure gift from the salt mother of us all, the goddess Ocean.

Amid the dreams of endless summer and perfect waves it’s easy to overlook the balance of nature. It’s a nice concept, but there’s a reason Mother Nature is called a bitch. All of her gifts must be paid for. Good surf in Southern California is purchased with bad weather on the other side of the Pacific. And if these breaks are the best — the best in a lifetime — what does that mean for the other side of the world?

But, in the unreality of Southern California, the rich and the rich in time do not care. They ride effortlessly, gracefully, impossibly on waves built from the misery of others. The girls on the beach are well-oiled. The volleyballs ping back and forth, forth and back as if time did not exist and all eternity was a sunny day. Truly, it is paradise. Paradise with a little bit of traffic. So is it any wonder, that, for leisure or commerce, Singapore Airlines Flight 209 is inbound?

209 has had a hell of a trip. It was badly battered shortly after takeoff. Halfway across the Pacific, the number three engine overheated. The pilot, Captain Song, eased it back to 20% power. While it’s not the first time he’s had to baby an engine, this is surely the worst flight of his career. Flight 209 is also losing cabin pressure. Somewhere near the middle of the flight, Song was forced to descend to keep the cabin supplied with sufficient oxygen. This means he has regressed to the beginning of air travel. Unable to fly above the storms, he must now play a deadly game with the weather.

This day the Pacific is filled with low pressure areas. They form, dissolve and re-form faster than Song’s navigator can keep track of them. They are pawns in a malevolent chess game. Song seeks to slip between them, to climb over them, even backtrack and fly around. He does not always succeed. Sometimes the storms converge on the plane like the fingers of an angry black hand. Even as they try to knock him from the sky, Captain Song curses them. He speaks to them with an intimate hate and names them for demons in the tales his grandmother once told him.

The demons of the East are largely unknown to meteorologists. So they name these areas of low pressure ‘onions.’ This is because the closely packed isobars on a weather map resemble layers of pungent vegetable. Meteorologists watch them closely, hunting Typhoons in the Pacific and Hurricanes in the East. Surfers also watch the onions. The are the source of the precious waves. The more powerful the onions, the farther out to sea they are and the longer they sit there, the better it is for the waves. Waves are formed by a series of complicated relationships, beyond the limits of human comprehension. Marijuana steeped conversations concerning questions of wave formation often take on mystical dimensions. Oceanographers and meteorologists can get even farther out there. They smoke math.

Even as Captain Song prays for these onions to rot away into the sea — to leave his ship and its cargo aloft on the uncertain waves of air – millions of people pray for these onions to abide and grow in strength. If you believe that God answers prayers, Captain Song and the 239 souls aboard Flight 209 are simply outnumbered. But perhaps there is room for higher ideals than majority rule. Song’s cause is just. His prayer is fervent.

By the time Flight 209 reaches the magical area of high pressure that always seems to settle over Southern California, Song can no longer feel his left hand. He has seen his ship through 10 hours of dangerous flying. He is soaked to the skin and his sweat has turned to ammonia. He has taken the weight of the entire task upon himself and prevailed. It’s not that he does not trust his co-pilot. It’s not that he does not have faith in his crew. He is simply the captain. The responsibility is his. He has more experience. He has more training. Song believes in duty. He believes that duty, his sense of honor harnessed to a purpose in the world, will make him something more than a man. The storm has passed, and it seems he is proven right.

In the tones of an ordinary flight on an ordinary day, he asks the co-pilot to take over. The co-pilot notices that Captain Song must use his right hand to pry his left hand off the wheel. Out of respect, he says nothing. Song’s will has triumphed over the limitations of his body.

The co-pilot wonders if his will would be strong enough. Somewhere deep inside him, he knows it would not. Captain Song leaves the cockpit and relieves himself. Now that he has a moment to consider it, his bladder is close to bursting. The relief is orgasmic. Even so, Song would have urinated in his seat if it had come to it. He washes his hands and feels every drop of water on his skin. He splashes water on his face and looks in the mirror. He knows the satisfaction that comes from being tested — pushed beyond one’s limits — and finding oneself equal to the challenge.

The moment is interrupted by the explosion of the number three engine. Song feels the blast ripple through the airframe and is back in the cockpit without drying his hands. Warning horns sound. The fire suppression system is activated. He can hear the screaming of the passengers. Most of the port wing is now gone, and the plane is losing altitude. The starboard engines have been throttled back, right full rudder is applied. Even as Song the man loses hope, Song the Captain does not. His will cannot be broken by circumstance.

Aircraft aluminum has no will. It has a predictable failure point, beyond which it will give no more. The wing has been through too much and, in accordance with the laws of physics and its technical specifications, it gives up. The copilot calls in a mayday, but he’s so scared he’s screaming it in Chinese. Song puts a hand on his shoulder. At his touch, the copilot regains control of himself.

Song takes up the mayday, in very clear, and slightly accented English. Los Angeles tower responds that all runways will be made available. Captain Song explains his situation more clearly. He does not know why he does this. It does not matter. Surely they are all dead. The flight recorder beneath his seat will explain everything after he is gone.

Song turns off the warning horns. If he is to die, at least he will not die with a headache. Small comfort. But comfort is comfort. The jet shudders again. The delicate equilibrium between full left rudder, full right stick, no left wing and reduced power on the remaining engines can’t hold much longer. Next to him, the copilot is chanting “Namo a mi tuo fo” The copilot believes that this chant will allow one to obtain rebirth in Amitabha’s Pure Land of the West.

On the beach the well-fed and safe lounge and watch the surfers in the light of the setting sun. If one were to squint, this could be the Pure Land of the West. The co-pilot may never see it, but if some part of his corpse can be recovered, it will probably be buried here.

Flight 209 is hit by breath of air and tumbles from the sky. The plane has lost its lift characteristics, and, in the eyes of physics, is now a falling body, rushing towards its terminal velocity. There is an equation that describes how long Captain Song has to live. He knows this math. Even though it is hopeless, he fights on. He fights for control of an uncontrollable plane. Song will do his duty unto death. Beyond death if he can. But there is nothing that a man can do. The fate of Flight 209 is bound by the laws of physics.

A Lot of Words He Doesn't Know

To the East of Flight 209 the laws of physics are under serious assault. The surface of the ocean parts in a perfectly straight line. Superheated seawater explodes into the air. An impossibility is headed West.