Hunted: A Claiming Novella (The Claiming) 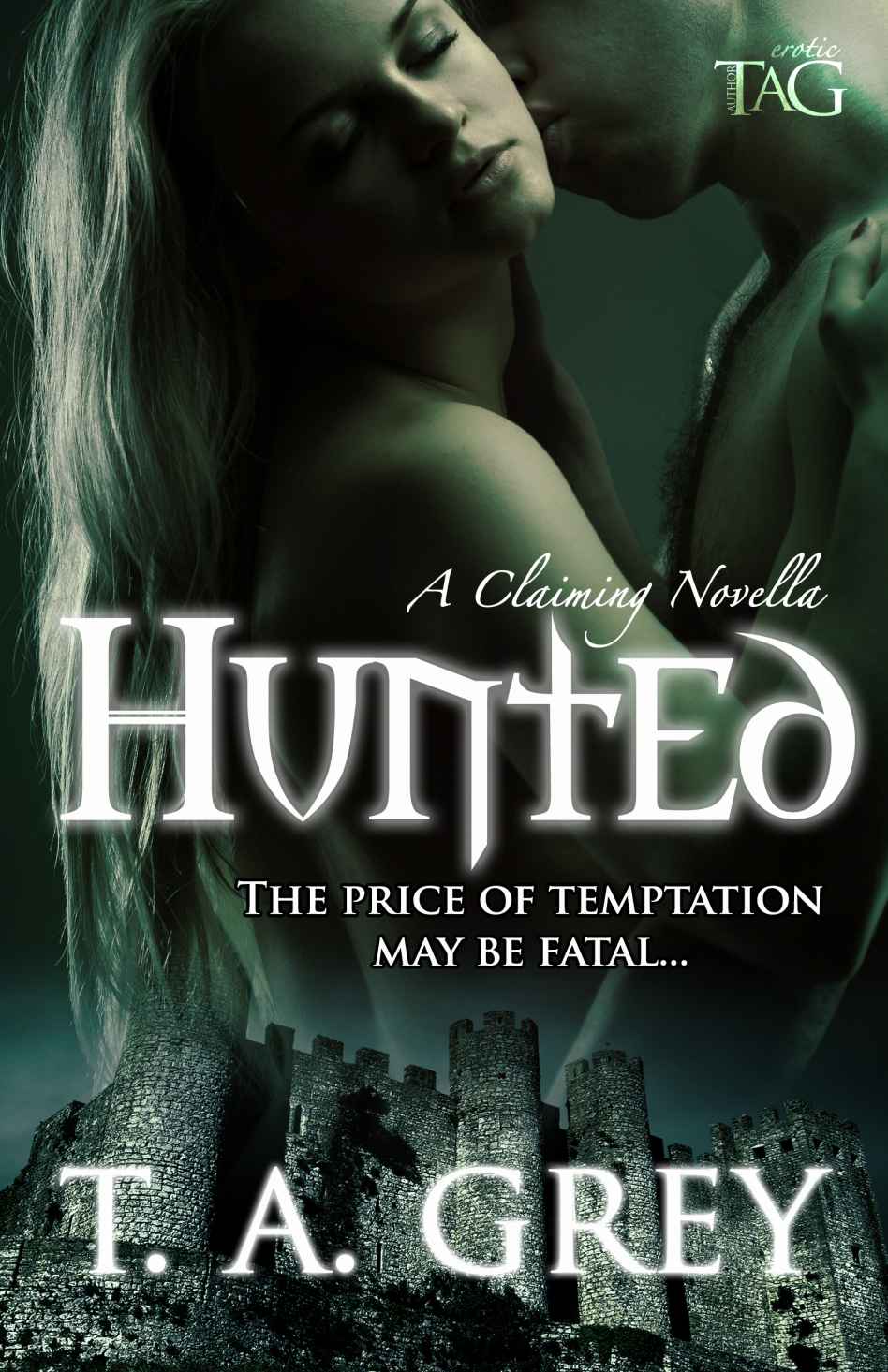 WARNING:
The story in this book contains explicit sexual content. This book is intended
for mature audiences only. It contains sexually explicit scenes that may be offensive.
Please keep your file in a safe area on your computer and away from minors.

This book
is not transferable. If it is sold, shared, or given away it is infringement of
the copyright of this work and violators will be prosecuted to the fullest extent
of the law.

This book
is a work of fiction. All characters, names, places, and scenarios are solely
the product of the author’s imagination or are used fictitiously, though
references to actual events or locations may be real.

Any
trademarks mentioned herein are not authorized by the trademark owners and do
not in any way mean the work is sponsored by or associated with the trademark
owners. Any trademarks used are specifically in a descriptive capacity.

From His Majesty
the King

Join us this weekend
for the celebration of the Claiming. This year’s pick, Penelope Farris,
daughter of
Jesha
and
Marvus
Farris, will step forward to be claimed in lawful ceremony to all possible male
candidates.

The font, elegant and crisp, thick and
black, scrawled across the fine parchment paper in curving sweeps. Occupying
the lower right-hand corner of the letter rested the royal seal stamped in
viscous, ruby-red wax, like blood.

Ryon Amadeus Ward read the royal missive
word for word before crumpling the letter in his fist.

“What is the meaning of this?”

The messenger who’d delivered the letter
stepped back at the edge in his voice. Of course the messenger wasn’t to blame,
but that didn’t keep anger from rising like a volcano about to erupt.

Forget it, he thought, instantly
regretting asking the boy. Even worse than this omen in written form was this
boy’s bumbling.

The general dismissed him with a wave
and the boy escaped with a mumbled “Thanks.”

The sun had yet to reach mid-day and
already an ache blared at his temples in full force. This was shaping up to be
a bad day.

He took a seat at his desk and pulled
his silver-edged knife out from the bottom drawer, locking the drawer again
afterward. Leather handled and sharpened weekly, the blade could cut through
skin without added pressure.

Meanwhile, his mind churned, ticking by
like a well-greased clock.

Penelope Farris would be available for
claiming.

An uncomfortable pressure filled his
chest, making him rub the spot. These emotions she’d always managed to suck out
of him never ceased to surprise him. His feelings for her were too strong, he
knew; fierce with possession and greed. He must have her. No other woman had
ever given him such pause for thought.

I
will
have
her.

She would be his. Completely his.

She must have known the king had
selected her for claiming in advance. And she hadn’t come to him to tell him.
Was this some sign? A challenge from her? But she knew where he stood, knew
that he had no qualms about claiming her. It had been his intention all along.
Even if he’d never voiced as much, he’d made his attentions well known through
his actions. It was she who was hesitant with him. If only he could figure out
how to surpass her defenses— something he’d been attempting for two years now.
All this time he has waited for her to come around.

Certainly she must know he’d find out.
What did she get by not telling him herself? Just what was she up to?

Surging to his feet, he nearly toppled
the chair backward, but caught it. He shrugged into his worn, brown, suede
overcoat before heading out into the chilly air. The door should have slammed
behind him, but he had far more control than that. His hands nearly trembled
with the focused, calm mindset he kept. He was the general. It was his duty to
keep his composure at all times.

Wait until he got his hands on her…he’d
like to wring her thin little neck.

Ha! He’d laugh if he could. As if he
could ever lay a hand on her in anything other than care and passion.

Penelope Farris was the only woman he’d
ever fancied for his own. She’d been as impenetrable as a fort to his advances.
And that was on the best of days. Normally he might have moved on by now, but
she had lodged a place in his heart two years ago and had never left. The
elusive dancer proved difficult to trap for something as simple as a
conversation. Penelope seemed to forever be eluding him to slip back into the
shadows and disappear. All the while her eyes flashed with open, sensual
invitation at him like she wanted to climb atop him.

Frustrating barely began to cover how he
felt about Pen.

She’d pushed his hand with this. These
weren’t normal circumstances anymore. Not even close.

Now she was at risk for any male who
wanted her. Anyone could stand up there during her Claiming Day and fight for a
chance to have her as wife. The Claiming Ceremony, and the winner of it, won
exclusive rights to the female. He had a time limit now. Until week’s end.

It was only the first of the week. Five
days was not a long time, but he was general of King Hargrowe’s army and his
ability to strategize better than anyone made him exceptional at his job. He
wouldn’t let anyone touch her, anyone but him. Even if his life depended on it.

Slipping his knife holster across his
chest, Ryon untethered his horse from the post out front of his house and took
off. His destination:
Prima Donna’s
. The dance club
where
Penelope worked as part of the last known ballet troupe.

The Avagarians had nearly eradicated
their entire human culture through savage warfare. Ballet dancing was one of
the last few traces of art the Tarlèans still had. The ballet dancers were
revered to the likes of celebrity gods by the people.

Evening blanketed the land in gloomy
shadows. Pale glimpses of moonlight peeped through the trees in flashes of
light.

The night seemed an apt representation
of his mood, he thought bitterly.

A line was already formed out front of
the dancing hall, not exactly typical for an early weeknight. But it looked
like everyone had received their missive from the king and wanted a fresh look
at the famous ballet dancer up for claiming.

Ryon stifled a curse as he tethered his
horse. There were far too many men in line for his liking. Patting Dominic, his
horses head, he lingered for a moment before slipping past the known security
guard with a glance. Murmurs sounded around him.

Inside
Prima Donna’s
dance hall
the swinging cabaret music resounded in full force: a mixture of jazzy
saxophones, hooting trumpets, and deep baritones of a thumping upright bass.
Above it all was a husky woman’s voice crooning about tulip fields and other
nonsense. A troupe of women wearing colorful leotards, tights, and ballet
slippers kicked their legs high in the air to the jazzy tunes. Ballet had
changed and shaped over the years. The music they danced to had changed and
morphed just as they, as people, had. The plies,
sautes
,
and glissades were all there, but the dancing was quicker and more robust.

The woman he searched for was not on
stage.

Ryon pushed himself through the crowd.
The heavy digestion of people made walking a chore as they shuffled shoulder to
shoulder into the club. The music grew louder as he came closer to his target.
He surveyed the crowd, his gaze skimming across a figure in a dazzling sequined
outfit and tutu that barely covered more than the necessary parts, before
locking on.

She was the center of attention once
more; a crowd having grown around her at the news of her Claiming Day.

Her beauty took his breath away. She was
the kind of woman you wanted all to yourself. He wanted many things from her,
and to give many things to her. He wanted her looking up at him with soft-eyed
passion after a good kissing. He wanted to feel her arms wrapped tightly around
him as they make love. Too many things to name.

He’d tasted her exquisiteness once.

Before it’d been ruined.

A scowl slashed his features and in the
next moment he charged through the crowd with determined strides. People parted
for him, instant recognition on their faces.

“The general,” someone whispered
excitedly. Others piped in too. He grew tired of the whispers, but the people
knew him as a hero and that was all he was to them. They didn’t know him
personally, therefore they didn’t treat him the same. Such was life. He’d
learned to deal with the attention, to ignore it, as saying anything usually
made the situation worse.

The news must have gotten to her across
the room, for Penelope Farris, looking utterly womanly in her outfit, stood
from her leaning position, and locked eyes with him. As always when he looked
at her, his heart lurched in his chest like a spring-loaded weapon.

Down, boy; she doesn’t feel that way
about you.

Her eyes widened, alarmed, as she turned
to face him. The man she’d been leaning over appeared behind her and a noise
much like a growl climbed from Ryon’s throat.

Duke Patrick Gaines, a wealthy, entitled
yuppie of a scoundrel—he couldn’t say enough good things about the man—slumped
against the wall near Penelope looking like a hungry cat waiting to be fed by
hand.

Fierce jealousy surged as it always did
when he saw men leering at Pen. She was
his
, even if he had yet to claim
her.

Ryon didn’t stop to say a word, couldn’t
have spoken even if he wanted to. His lips were pursed tighter than a wet seal,
his biceps contracted with the urge to throw his fist into the duke’s pale,
smug face until it turned purple and blue.

“General. What are you doing here?”

He heard tension in Penelope’s voice.
Her eyes skated down his torso then back up. Did she have any idea what her
greedy copper eyes did to him? When she looked at him like he was a large,
intimidating man and she liked it.

Lord, she drove him mad.

If only she’d stop running from him.

“Please, do tell. What’s your business
here, General Ward?” the duke asked. “I don’t believe it’s every day you find
the general visiting a dance hall.” Mocking words had never sounded so obvious.

Tall and slender, the aristocrat wore
his black hair pulled into a long braided thong around his shoulder. His lips
dipped into a twisted scowl, disdain dripping from every pour of his body. He
wore expensive clothes made with fine etchings in gold and silver thread. The
red velvet cape draped across his narrow frame must be worth more than Ryon’s
current ensemble.

Ryon and Patrick had never been friends.
They’d done some military combat training together during their education
years. In that time, they’d managed to compete and learn to loathe each other.
They both had one thing in common though—an interest in Penelope Farris.

Penelope, or Pen, as he preferred to
call her, no matter how much it rankled her nerves, put her hands on her hips
in a move he recognized all too well. Anger. “Yes, what is this interruption
for,
General
?”

His fist twitched. He hated when she
called him that. They both knew it. Thus why she did it. The little devil.

That surprised her. “About what?” She
fidgeted with the lace of her tutu, one thin slipper lifting to scratch her
calf with the toe.