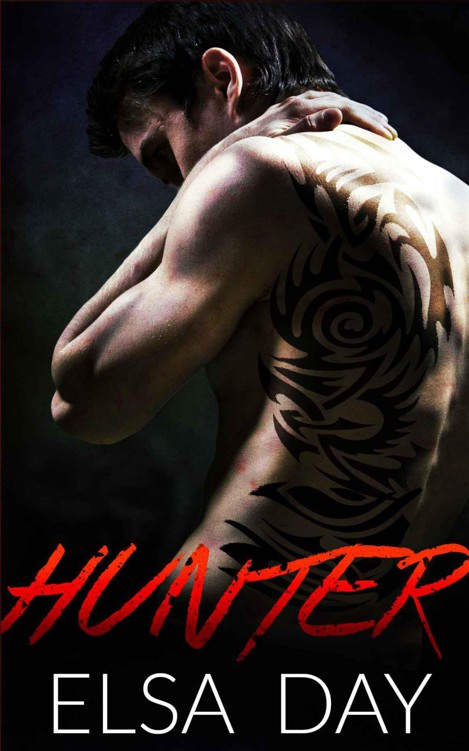 Subscribe to my newsletter to know when new books are released!

Their love was doomed from the start.

Nadia knew better than to fall in love with someone like Hunter. Her role as the daughter of the Midnight Stalkers' president is clear. She was born into the club, and she is supposed to die for it.

But then Hunter walked into her life, and everything changed...

Hunter came to town with a deadly mission. The Sons of Rebellion are depending on their tough Sergeant at Arms to put an end to the evil deeds of the Midnight Stalkers. But when Hunter starts to spill blood, he has a new problem.

It's not just the Midnight Stalkers he's tearing apart, but Nadia's life.

Their love should not have happened, but now it is too late.
For the first time, Nadia and Hunter will have to ask themselves a question. Which is more important: love or family?

Letter from the Author

Other Books by Elsa Day

(Need a little reminder before you start reading? Click here)

IT WAS FINALLY TIME to get down to business.

The wind rushed by, roaring in my ears. I sped along the dirty road and the trees around me whipped backwards as I forced my way through. The sun wasn't high yet, it was too early. A cold fog still hung on the ground, making everything slick and wet.

That's my favorite kind of terrain. Dirty and muddy.

It was
time
. My Harley rumbled underneath me. The handlebars jittered, vibrating underneath my palms. It was an extension of my body. I came into a curve and leaned over until the wheels rounded the corner. It was as natural as breathing, as walking.

My bike was a part of me. She didn't have my scars, but how many times had I wiped blood off of her shining metal? And today, was I going to have to do it again?

I took a deep breath. The ground was rocky. I tore through the stones, whipping past them. The wheels kicked them up into the air, throwing them behind me. A cloud of grit flew up and got into my eyes. The sand burned, blinding me for a second. I skidded not he road before getting control again.

Fuck
. What was I
doing
? I had to get my shit together!

This would be easy. I just had to get back to Jase and Brent. We'd deal with this guy, and that would be it. It would be clean. Quick. Easy.

We'd do the job just like we were supposed to. It wasn't anything complicated. Just killing someone.

The face she had on when I left!
Damn
! Those big brown eyes were staring at me, begging me not to go. The way she looked even without a scrap of clothing on her. Like the shitty hotel sheets weren't even fit to touch her skin. If anyone could have stopped me, it was her.

Just remembering that, my dick stirred in my pants. Nadia's smell was still on me, and I could feel her lips pressed against mine. It was like she was following me. No. There was no time for that.

I screeched to a halt in the parking lot outside of our room. As soon as I hopped off and pushed the door open, Jason and Brent were there waiting for me.

"Where the fuck were you?" Jase asked.

He and Brent were standing over a table covered with papers. Bottles of beer rested on top of them, making the ink bleed with their condensation. I grabbed the documents, letting the bottles fly off the table.

"What the hell?" Brent yelled.

He reached for one of the bottles as it fell, but it bounced out of his hands and shattered on the ground. Brent stared at the aftermath as if they didn't have a whole six pack sitting in the corner.

"Why would you waste a good beer?" he asked.

"Did you guys forget that these are important?" I said. I shuffled the papers in my hands. "Besides, it wasn't good anyway."

"What's wrong with you, huh?" Brent asked. "And where
were
you?"

What was I supposed to tell them? That I'd been sleeping with the enemy? I clenched my fist.

"What the hell does it matter?" I said. "Let's get this shit done. You said you got 'em. Who is it and where?"

That was enough to shut them up. Even Jase and Brent got serious when it came to business. Jase pulled out his phone and started tapping away. Eventually he held the screen up for me to see.

It took me a moment to recognize him, and not just because of the crappy quality of Jase's camera. It was strange to see him with gray hair invading that thick head of greased back black hair. Wrinkles covered his skin, making him look like old leather. Heck, he could have been somebody's dad if it weren't for those homemade tattoos creeping up out of his sleeve. No. Not anyone's dad, but I'd recognize him anywhere.

"The name's Morton Ticket, but he goes by Slick. He's the Midnight Stalkers'-"

"You know this guy?" Brent asked.

In my mind, I ran over my weapons. Knife? Check. Gun? Check. What would that old bastard be up to? I grabbed another knife from Jase's kit and shoved it in my boot.

"Yeah, that was the plan. That's why we were waiting for you, but you took forever-"

WHY SHOULD I HAVE to sneak into my own home?

I looked up at the window to my room and drew in a breath. There was no way I was going to make it up there
this
time. My body was still too sore. Everything ached and I just wanted to get to bed. Besides, mom and dad were expecting me.

I could just imagine it now: mom would wag her finger in my face and yell, "Where have you been,
young lady
?" Dad would fume in the background. If I was lucky, he wouldn't say anything.

My hand hovered over the doorknob to the front door. I was afraid to touch it, almost as if it was covered in poison. It might as well have been. Whatever. I was an adult. I could do what I wanted. Right?

The door came open with a click. I swung it open and tried to hurry in before anyone saw me, but it was too late. They were already standing there, arms folded and looking like they hadn't slept all night.
Shit
.

I couldn't even remember the last time Mom had used my middle name. This wasn't good.

"Do you have
any idea at all
how worried we were about you?" she yelled.

The sound of her voice was like nails screeching on a chalkboard. It shook me all the way down my spine. I slammed the door behind me. Couldn't she at least wait until I was inside to start
screaming
at me?

"But I
told
you I was with Jona! My phone died. What the heck was I supposed to do about that?"

Mom pointed her finger in my face. It shook with her anger.

"Do you think I'm stupid? Do you really think that you can come in here and talk to me like that?"

She pulled her hand back, raising it up into the air. I flinched. How hard would it hit? I close my eyes, waiting for the impact.

It never came. Dad was standing behind mom, holding her hand. For a while she struggled, but then she went limp in his grasp. I am also grateful, but the look in his eyes told me that this wasn't an act of mercy.

"You missed your mother's pancakes yesterday."

At first I was confused, but then I remembered. I ran out during breakfast, so yeah I
did
miss her pancakes. The idea of Dad talking about
that
, of all things, made me curl over in laughter. Maybe it wasn't so bad. Maybe he wasn't mad at me after all.

And then I looked up at him. He wasn't laughing. Dad stared at me, with not even a single trace of humor in his eyes. I stopped laughing.

"Listen to me carefully," he said, "because I don't want to say this again. This is a warning. I've been turning a blind eye to your little escapades. I know your mom was trying to keep it away from me, and I figured that she could handle it. But you are starting to go too far. Soon, you're going to be married to the new president of this club. It's time to start acting like it."

I couldn't meet his eyes. I looked down, away from him, trying to ignore the way my legs felt like they were going to give out. Should I have lied to them? Should I have just told them the truth?

Dad took another step towards me.

"Or do I need to give you your own permanent entourage to make sure you keep out of trouble?" he said. The threat in his voice was rising.

I slammed my mouth shut and spun my head around. Tyson? What was he doing here? He was back
already
?

He walked up to me and put his hand on my shoulder.

"I'll make sure she doesn't get into any trouble," Tyson said, "and if sh
e
does, you can blame
me."

Dad looked between the two of us, almost as if he was uncertain about what to do. I could understand. It wasn't as if either of us have the best track records for keeping out of trouble.

He looked at mom and she nodded her head. It still took him a few more moments to agree.

"Fine," Dad said, "you're responsible for her, Tyson."

He pushed his finger into Tyson's chest.

"Prove to me that you're man enough to handle a woman," he said. "If you can't, I'll show you how it's supposed to be done."

After that, Dad pushed Tyson aside and left the room. Mom was still standing by the door. It wasn't like her to be this quiet, and she looked like she had something to say, but she was silent. She looked at Tyson, and then at me. Something had replaced the anger in her gaze. What was it? Sadness? Regret?

She brushed past me, leaving the room before I had the chance to find out.

I looked up at him.

Love on Site by Plakcy, Neil
Shiftr: Swipe Left for Love by Ariana Hawkes
Fun With a Fireman by Daniella Divine
My Lady, My Spy (Secrets and Seduction Book 4) by Sheridan Jeane
GLAZE by Kim Curran
The History of the Siege of Lisbon by Jose Saramago
Seduction & Temptation by Jessica Sorensen
Charmed: Let Gorgons Be Gorgons by Paul Ruditis
The Legend of Ivan by Kemppainen, Justin
Partner In Crime by J. A. Jance