Read I Am Rembrandt's Daughter Online

I Am Rembrandt's Daughter 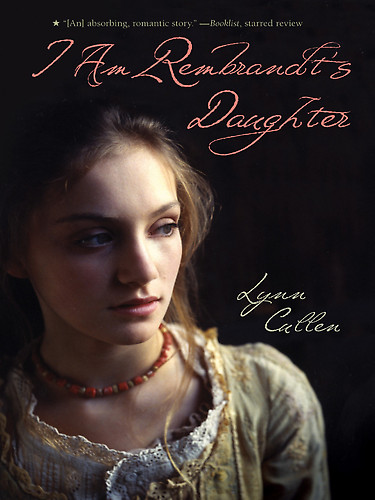 I Am Rembrandt’s Daughter

For Mike
My partner on the road trips to Amsterdam,
and in life
.

All those years living across the canal from the New Maze Park, and I never did make it inside. In spite of the promises I pried from my
moeder,
I never did get a taste of the pancakes frying in hot butter that I could smell from our porch step where I went to escape my
vader
’s shouting. I never did get to chase the blue-bellied peacocks whose squawks, even from this side of the hedges and across the murky green water of the canal, pierced so many of my moeder’s silences. I never did get to run my hands through the water of the fountains I could hear splashing inside the park when I was sent to fetch my vader, too long at the tavern. But it is too late now. I am new-wed and our ship leaves for the East Indies in a fortnight, and there are accounts to settle
.

Behind me two men paw over my vader’s things. They think that because I stand at the open studio window and point myself in the direction of the park, I don’t hear or see them. A girl of sixteen, plainly dressed, is invisible to bargain hunters
.

“Couldn’t get a sword through this.” The taller man, the one in the black wool doublet that is short in the sleeves and shiny with wear across the shoulders, pokes a bony finger through the rusty eye slit of an antique helmet. His long neck takes a dip at his Adam’s apple, which, combined with the thistledown knot of hair on the top of his head and the feathery white tufts of his brows, gives him the look of a new-hatched stork. “I can barely fit my finger through it.”

“Let me see.” The other man takes the helmet from the first man’s hands. “Damage to the nosepiece. Ruins its value,” he says, though he doesn’t put it down. He is short limbed and plump and wears the longest, most beautifully ironed white linen collar I have ever seen. It would have looked elegant on a man twice his size, but on him, it resembles an infant’s bib. His fat cheeks and puffy lips only add to the effect, giving him the appearance of a large spoiled baby
.

“Who was that French king who died from a lance poked through the eyehole of his helmet?” says the big baby. “About a hundred years ago?”

“Henri the Second,” Big Baby says, answering his own question
.

“I know it is.” Big Baby purses his lips as he puts down the helmet. “They don’t make things like they used to. Everything is from the Indies these days, not your solid Dutch manufacturing.”

The wide wooden floorboards creak under their feet as they move on to examine the next set of shelves
.

“The old fellow hasn’t been around here for a while.”

“Well, so far I don’t see anything worth making an offer on, just a lot of rubbish. What is that?”

The Stork turns a tall, fluid-filled jar in which pink ropes and pale, almost see-through strips of matter swirl like seaweed around a spongy white stick. Big Baby peers at it closely, dabbing his nose with a lacy handkerchief
.

“I do believe … Good heavens, it’s an arm! Look—see the fingers?”

“A flayed arm. I’d heard old Rembrandt was a student of anatomy. He must have used this to help him paint musculature.”

“I know he did. He would have needed the help, wouldn’t he? Lost his grip in his latter years, I would say.”

The men linger over the jar and the three others like it, then shuffle on to the row of unframed paintings propped against one wall. They pass without a second look at a painting of a maid shading a candle with her hand, a canvas of two African men, and one of a young man in tatters, kneeling before a bearded gentleman
.

“Too dark,” Big Baby mutters under his breath. “And much, much too rough. You can see every stroke! Imagine—he used to be the greatest painter in Amsterdam. Now I wouldn’t give six
stuivers
for the lot.”

I resist the urge to tell them to leave and remind myself that the battle is over. Let it be. I have a husband to think about now. Let the past stay in the past. I close my eyes and let the damp Amsterdam breeze blowing in through the window cool my face
.

They pause before the next canvas, which is so covered with splotches of red, brown, and golden paint, that from this angle, it has the choppy surface of a canal in the rain. Big Baby starts to waddle away, then stops when his tall friend won’t move
.

The Stork keeps looking. “There’s something about this…”

It is difficult enough to watch them pick through Vader’s things, but for strangers to stare at this particular painting
…

“Don’t look too close,” I say. “The smell of paint will not agree with you.”

The Stork startles, then notices me by the window. Big Baby looks at me, too, then frowns as he sniffs at the painting. “There’s no smell to this. It can’t have been wet for at least a year, not if it’s a real Rembrandt. I doubt if it is—it’s rough, even for him.” He tips his head toward me, then under his breath, says to the Stork, “Who’s the girl?”

I smile to myself as I turn back to the window. Close. But not quite.

“Where is your master?” Big Baby says loudly. “I’d like to offer him a guilder for this picture.”

A single guilder, when Vader’s paintings used to fetch thousands from princes. A paltry guilder for this, of all pictures. Gravediggers get twenty for their services, as well I know. Well, I don’t care if we need the money for our journey
.

“What’d she say?” Big Baby asks his companion, as if I spoke in some sort of incomprehensible maid tongue
.

“I don’t see how this girl would have the authority to make such a decision,” Big Baby says. “But no matter. Who wants such a messy old thing, anyhow?”

With another crunch of the floorboards, they move on to a stuffed bird of paradise and Vader’s collection of shells. I cannot help but return my gaze to the canvas, with its blaze of reds and golds and comforting browns. How well I know this painting. Many times I have examined it up close and wondered how Vader could make an arrangement of brushstrokes so neatly add up to everything that is important to me. Now, across the studio, I can see neither the short jots nor long swaths of paint. They have melted together to form a scene more dear to me than anything in the world. It is more than just canvas and primer and pigments mixed in oil. Like so many other of Vader’s paintings, it is the story of my life
.

Two girls about my age–nearly fourteen–walk arm in arm down the frost-etched bricks of the sidewalk on the other side of the canal. Even from this side of the window, when the wind gusts, I fancy I can hear the rustle of their fine silk dresses under their fur-trimmed capes as they pass the locked gates of the New Maze Park. An older woman in thick furs waddles behind them like a huge glossy beaver, her proud gaze set on their backs. She must be their moeder.

My old cat, Tijger, shifts on my lap, setting off a fresh round of rusty purring. In the summer, with the windows open, you can hear the wheezy organ music and the strangled shrieks of peacocks coming from the park. You can catch the distant shouts of vendors selling pancakes and pickled herring to people lucky enough to have a few spare stuivers jingling in their pockets. Now, in late December, all is quiet in the park.

With a sigh, I mark my place in my book with a scrap of cloth, then put Tijger from my lap and brush off my apron. Tijger follows me slowly up the stairs, swaying like royalty. He is more than nine years of age—young for people but old enough in cat time. After Titus and my books, he is my closest friend.

Up in my vader’s workshop, the cooing of wood doves comes from outside the window near where Vader stands at an easel. On the shelves around him are ancient helmets, stuffed birds from New Guinea, and dusty seashells. There are swords and pole axes all in a jumble and a straw mannequin with its hand twisted into a wave. My favorite items are the four jars each containing its own flayed human arm. Charming. And Titus asks why I never have any of the neighborhood girls over for a visit.

Vader glances at me. “Oh. Cornelia.” He always carries his voice low in his throat, as if his words have to fight him before he will let them out. “Where is Titus?”

I go over and jab at the remains of the peat sod smoldering in the fireplace. Vader will let the fire go out, then he’ll shout as if attacked by cutpurses for someone to come relight it. Me.

If Vader takes the hint, he does not show it. His voice thunders up from deep in his barrel of a chest. “Tell me how this looks.”

Once the fire is gnawing at the peat with a hushed and satisfying crackle, I pick up Tijger and peer over Vader’s shoulder. The oily smell of his paint makes my head hurt though I should be used to it. Paint stink has filled my nose since I lay in my hand-me-down cradle. Now Vader dabs more paint on a canvas already shingled with thousands of little slabs of it. No smooth, glossy surfaces for my vader, though even I, an ignorant girl, know that rough painting, with every brushstroke showing, is unsellable. No rich merchant from the East India Company wants a splotchy mess on the wall of his mansion on the Prince’s Canal, yet here is Vader, working on a choppy picture of a family with two smiling parents and their three happy children. I laugh. What does Vader know about happy families?

The Playmaker (Fire on Ice) by Madison, Dakota
Fifth Vision of Destiny - Brett by Kallysten
The King of the Crags by Stephen Deas
Darkness Exposed by Reid, Terri
Bearly Breathing by Kim Fox
The Last Time They Met by Anita Shreve
The Tall Men by Will Henry
All Balls and Glitter by Craig Revel Horwood
Red Angel by Helen Harper
Born of Fire (The Cloud Warrior Saga Book 8) by D.K. Holmberg