Read I Don't Know What You Know Me From: Confessions of a Co-Star Online

I Don't Know What You Know Me From: Confessions of a Co-Star 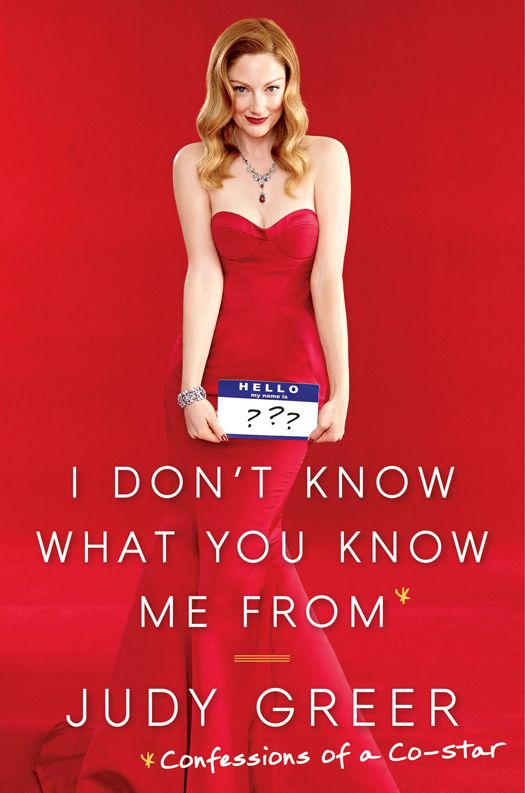 All rights reserved. Published in the United States by Doubleday, a division of Random House LLC, New York, and in Canada by Random House of Canada Limited, Toronto, Penguin Random House companies.

DOUBLEDAY
and the portrayal of an anchor with a dolphin are registered trademarks of Random House LLC.

For Dean Johnsen, who is everything
.

Contents
Cover
Title Page
Copyright
Dedication
INTRODUCTION
Part 1—Early Life
DETROIT-ISH
I USED TO BE MORE UGLY
MOM
ANYTHING YOU CAN DO, I CAN DO BETTER
CAREY CHRISTMAS
MY FIRST PUBE
WAITING TABLES MAKES YOU A BITTER PERSON

2B
MY STUPID TRIP (ALONE) TO SPAIN
HOW SHOPPING CHANGED MY LIFE
HOME IS WHERE THE COPS SHINE THEIR HELICOPTER LIGHTS
Part 2—Hollywood Life
JUDY GREER IS MY NAME. WELL, NOW IT IS.
IT TAKES A VILLAGE
THE WEEK I HAD A BEARD
PRESS JUNKETS
FAQ
CELEBRITIES I
’
VE PEED NEXT TO
THE ULTIMATE BEST FRIEND
YOUR COMPLIMENTS ARE HURTING MY FEELINGS
BAD OSCAR!
PAPA, PAPARAZZI
A DAY OFF ON LOCATION
ASHTON KUTCHER GAVE MY DAD A HARLEY
INTOLERANCE
THE TORTOISE AND THE HARE
Part 3—Real Life
SINGLE WHITE MALE
LOVE NOT AT FIRST SIGHT
DRUGSTORE THERAPY
DEAR LAURA A. MOSES: A LETTER TO A FRIEND
I DON
’
T (REALLY) HAVE ENEMIES
RANDOM JUDY TEXTS
HE DOESN
’
T HAVE AIDS
BEST ADVICE I
’
VE EVER GOTTEN
ALL-TIME LONELY
HOW TO FEED YOUR STEPCHILDREN
JOBS I COULD HAVE INSTEAD OF BEING AN ACTOR
ONE IS NOT THE LONELIEST NUMBER
DEAR DIARY
THE MANIFESTO
ACKNOWLEDGMENTS
Introduction

I am not a movie star. Chances are when you walked by my book and saw my face, you didn’t know what my name was, but you knew that I looked familiar. Perhaps you think we have a friend in common—we don’t. Or that I was in your sorority—I wasn’t. Maybe you do know that I’m an actress, but you just don’t know my name. You might remember me from as far back as
The Wedding Planner
or as recent as
Arrested Development
or
Carrie.
It’s hard to say, since I’ve had so many different jobs and played so many different characters. What are you into? What do you like to watch? Are you into movies or television? Indie films or blockbusters? See, if I had the time, and we were in the same room, I could sit down with you and maybe tell you what you liked me from. I would look at your age, sex, and clothing and probably be able to pinpoint what role I’ve played that you responded to. It’s a little like racial profiling, but with fans: fan profiling. (I’m sorry for mentioning racial profiling so early; it’s probably made you uncomfortable, and that wasn’t
my intention.) Anyway, I don’t know what you know me from, and it’s taken fifteen years but I’m pretty good at fan profiling now. And I’d like to take this opportunity to thank you for being a fan, thank you for watching whatever it was that you watched, liking me, and buying my book. Unless we really do know each other, in which case, well, I’m sorry I didn’t remember, and I’d still like to thank you for buying my book
.

I’m a nice girl from the Detroit area—Livonia, to be exact. I was born in Detroit, lived in Redford until my first memory, which my mom claims is of the linoleum kitchen floor in our first house. I went to high school in Livonia. (Go, Chargers! I never went to a single football game.) Then I went off to college in Chicago to study acting and never came back. OK, I’m exaggerating; I came back for my Christmas presents every year, which made me a deserving victim of the “we turned your bedroom into a den” cliché. I took a trip to Los Angeles after college, and fifteen years later I’m still here. It was February, can you blame me? Have you experienced a negative-eighty-degree windchill before?

You’ve heard the phrase “There are no small roles, just small actors”? Well, I kind of disagree. There are small roles, but when you get a lot of them in a row, you can become a pretty successful actress, and that’s what I’ve done. At least for now, I’m not saying I don’t want bigger roles. I’m not that self-satisfied. And who knows how much longer I’ll keep getting jobs. I don’t have a crystal ball, and even if I did, I’d probably drop it by accident
.

So this is me, just trying, in book form, to introduce myself. This is who I am. This is what I think about things. This is stuff that happened to me, that could just as easily have happened to you. I’m not that special, and we’re probably
not that different (unless you’re a dude). I think I am really lucky to be where I am in life, but I’ve never really lost the feeling that I don’t fit in, and if you have, will you please e-mail me and tell me how you did it? I’m serious. Oh, and spoiler alert, I don’t list all my credits in this book, so reading it will not tell you what you know me from—you’ll have to Google me to figure that out. And hopefully, after reading this, you’ll want to
.

I GREW UP IN A SUBURB OF DETROIT, MICHIGAN. NO
, not Grosse Pointe. Not 8 Mile. To everyone who is not from Michigan: there are more places besides Grosse Pointe and 8 Mile in the Detroit area. Grosse Pointe is for superrich people, of which I was/am not. And 8 Mile is a road, not a place. It is a long road that goes from Eminem-land all the way to McMansion-land. I am from Livonia. It’s basic. It’s clean and there are no tall buildings that I can remember, maybe the city hall, or the hospital, but I’m only talking eight floors, tops. There are a lot of strip malls and two-story colonial houses and many good public schools. It is your typical midwestern suburb.

In Livonia our high schools were named after foreign statesmen, the junior highs were named after poets, and the elementary schools were named after presidents. I went to Kennedy for elementary school, Frost for middle, and Churchill for high school. But I hated school. I pretty much hated every second I had to be there. I can’t really remember why I hated it so much, but I think some of it had to do with having to leave my house in the cold so many months out of the year. It was always so cold, and there was
a lot
of snow. I took the bus to high school, but
most of elementary and all of junior high I had to walk. It was a particularly long walk across a huge field to get to Frost, and in the winter that field was covered in snow. There were no trees or buildings to stop the freezing-cold wind from tearing through my jacket and sweaters in order to get to the very center of my bones, where it would stay until spring. No, it wasn’t uphill both ways barefoot, but still, those mornings and afternoons were rough. Sometimes my friend Nicole and I would “borrow” change from our classmates and stop at the donut shop on our walk home, and we’d cross the field almost happily, thinking of the cinnamon roll and hot chocolate we were about to inhale. And for one week during the summer I forgave that field because it would morph into a magical carny wonderland called the Livonia Spree. For one week I lived a block away from the Tilt-a-Whirl, the merry-go-round, the Matterhorn, game tents, a fun house, a house of horrors, and my favorite attraction, the Budweiser Clydesdale horses. I really looked forward to those horses coming to my town for a visit. I think that’s why I cried so hard during that Super Bowl XLVII commercial. You know, the one about the horse trainer who sent his horse away to Budweiser once it was trained but then drove out to visit it during a nearby parade. And in the end the horse broke loose and ran back to find his trainer? Shit. Now I’m crying again. I sobbed after seeing that commercial. Like,
sobbed
. My husband was worried about me. I was worried about me; I wondered if people ever died of suffocation due to uncontrolled sobbing, because I thought I might. Anyway, as a kid I loved seeing those beer horses and marveled at their size. I always wondered if they liked being on the local carnival circuit and was slightly disillusioned when I found out there was more than one team of Budweiser Clydesdales. For years I thought I was meeting the stars of all those commercials. The day I found out differently was a real coming-of-age moment for me. Maybe
that’s
why I cried so hard…