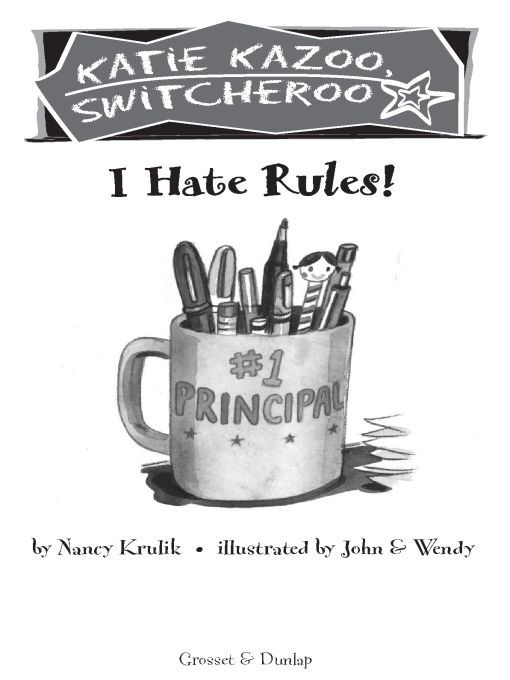 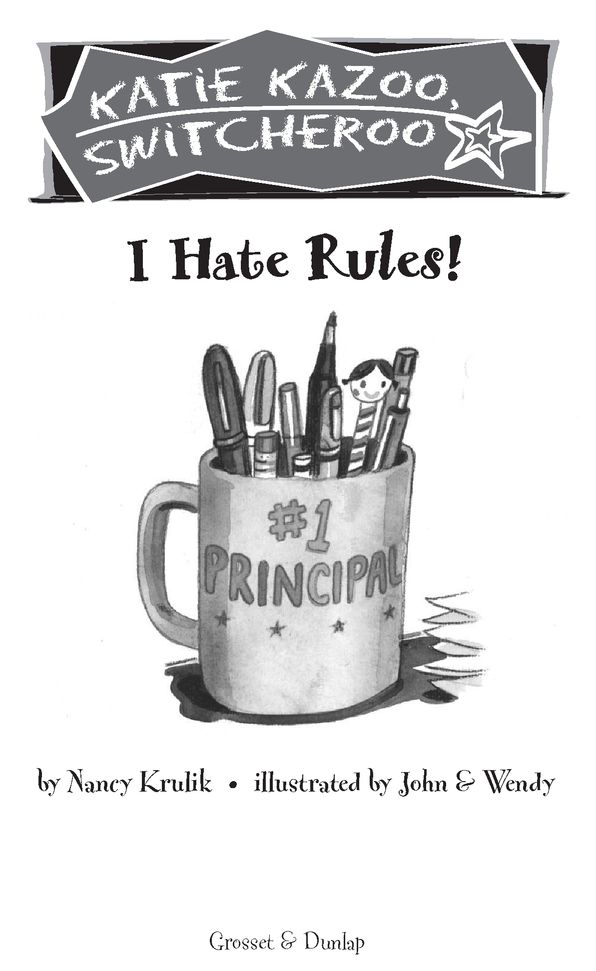 Chapter 1
“Ouch!”
Katie Carew groaned when George Brennan tagged her. George was a lot bigger than Katie. Sometimes he tagged too hard.
“Gotcha, Katie Kazoo!” George shouted, using the special nickname he’d given her. “Now you’re part of the chain.”
Katie frowned. She was always the first one tagged when they played Train Tag. Katie wasn’t a very fast runner.
But she wasn’t a bad sport, either. She linked her arm through George’s without complaining. Together, they ran after Miriam Chan.
“You’re tagged!” George cheered as he bashed into Miriam’s side.
Miriam rubbed her arm where George had tagged her. “How come you guys never go after Jeremy or Kevin?”
“Because they’re too fast,” George explained. “Join the train.”
Miriam slipped her arm through Katie’s. “Now who should we try to tag?” she asked.
George looked around the playground. Jeremy Fox was there. So was Mandy Banks. They were both really fast. George couldn’t catch them on his own—never mind when he was running with Miriam and Katie.
Then Suzanne Lock strolled onto the playground. She was wearing cowboy boots and a skirt. That wasn’t a great outfit for running. She’d be an easy catch. “Let’s get Suzanne!” George answered.
George took off in Suzanne’s direction. He pulled Katie and Miriam behind him.
“Gotcha!” Miriam and George cried out as they reached Suzanne. 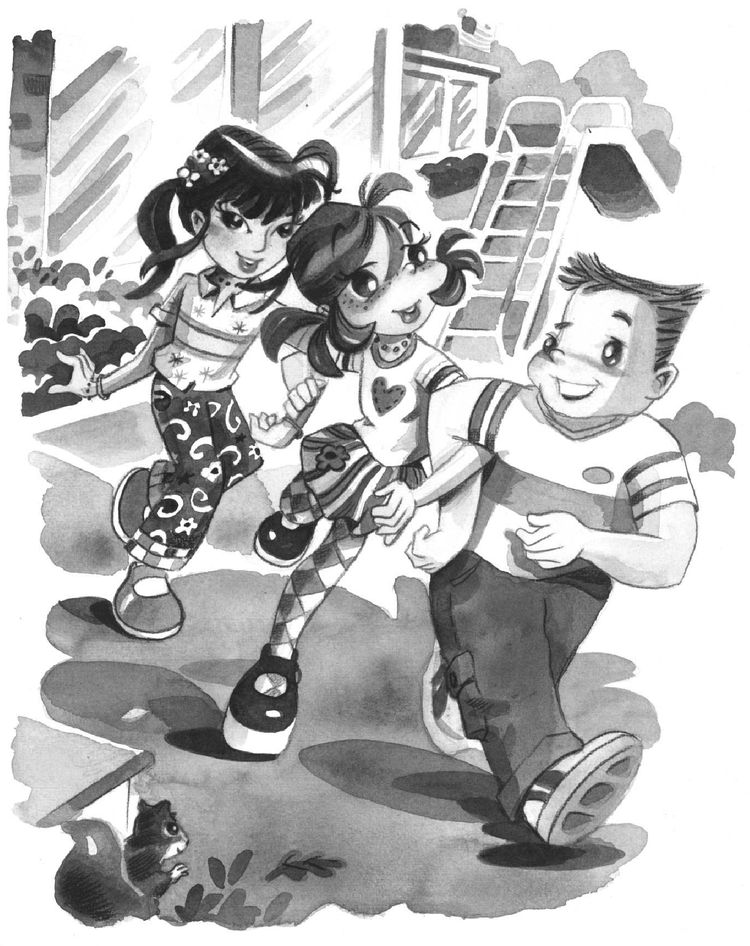 “Join the train,” Katie added.
“No, thank you,” Suzanne answered.
“What do you mean, ‘No thank you’?” George demanded to know. “We tagged you, so you have to join the train.”
“No I don’t,” Suzanne told him. “Train Tag is for kids.”
“We
are
kids,” George reminded her.
“Well, I’ve got more grown-up things to do.” Suzanne reached into her pocket and pulled out a cell phone. “I have to make a call.”
“Hey! Whose is that?” Miriam asked.
“Mine,” Suzanne answered.
Katie had seen that phone before. It really belonged to Suzanne’s dad. But Katie didn’t say anything. She didn’t want to embarrass her best friend.
“How come you brought your cell phone to school?” Miriam asked.
“You never know when you might need to call someone,” Suzanne told her.
“Hey, Katie Kazoo. You know what you get when you mix a telephone with a pair of scissors?” George asked.
“What?” Katie asked.
“Snippy answers!”
Katie giggled. She loved when George told jokes.
Suzanne didn’t. Instead of laughing, she pulled a headset from her backpack. “I can talk on the phone and still use my hands,” Suzanne explained. She plugged the headset into the phone.
“My mom has one of those in her office,” Miriam told her. “You look really grown up, Suzanne.”
Suzanne smiled.
Just then, Katie’s other best friend, Jeremy Fox, came running over. “Hey! Mrs. Derkman is going to make us line up any minute. We don’t have much time left to play. Come on!”
“You guys go ahead,” Suzanne said. “I’ll just stay here with my phone.” 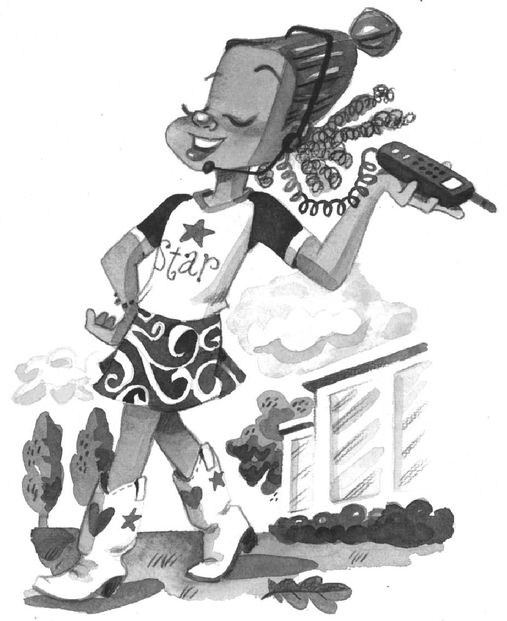 But before the kids could go back to their game, Mrs. Derkman blew her whistle. “Class 3A,” the teacher called out, “let’s line up.”
“Boy, that math homework was really hard,” Katie whispered to Jeremy as they got in line.
“It took a long time,” Jeremy agreed.
George looked at them both strangely. “Math homework? We had math homework?”
“You didn’t do it?” Katie asked.
George turned red in the face. “I . . . uh . . . I guess I forgot.”
“Oh man,” Jeremy moaned. “This stinks.”
“Why?” Katie asked him. “
George
forgot his homework. Not you.”
“I know,” Jeremy agreed. “But George, you were supposed to be in the four-square championship at recess. You’re the best four-square player in our whole class.”
George smiled. “I’m the king. I’m going to destroy the kids in 3B.”
Jeremy shook his head. “No you’re not. You’re not even going to be there. You know the rule. If you forget your homework, you have to do it at recess.”
George didn’t look so happy anymore. “Mrs. Derkman has too many rules,” he moaned as he got into line. 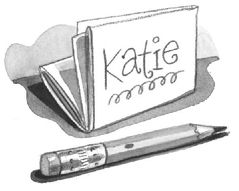 Chapter 2
Katie walked into the classroom and hung her jacket on the third hook from the left.
Then she placed her homework in the bin on Mrs. Derkman’s desk.
Finally, she sat down at her desk and began to copy the spelling words on the board.
Katie did the same thing every morning. Mrs. Derkman had very strict rules about how you behaved in her classroom.
George sniffed at the air as he put away his coat. “
Ooh
. Do you have tuna fish again, Manny? Or did you just forget to shower?”
A few kids chuckled. Mrs. Derkman did not. “If you have a question, George, please raise your hand,” she said.
George sat down quietly and pulled out his notebook.
Just then a small piece of paper landed on Katie’s desk. It was a note from Suzanne. Katie read the note and scribbled an answer.
“Kevin, pass this to Suzanne?” Katie whispered as she folded the paper. Kevin sat between Katie and Suzanne.
“No way,” he whispered back. “I’m not getting in trouble.”
Katie frowned, but she understood. Mrs. Derkman didn’t like kids passing notes in class. It wasn’t Kevin’s note. Why should he risk it?
Katie waited until Mrs. Derkman was looking the other way. Then she tossed the note to Suzanne.
Katie almost hoped Suzanne
wouldn’t
write back. If Mrs. Derkman caught the girls writing notes, she was sure to do something mean. Something absolutely horrible. Something . . . 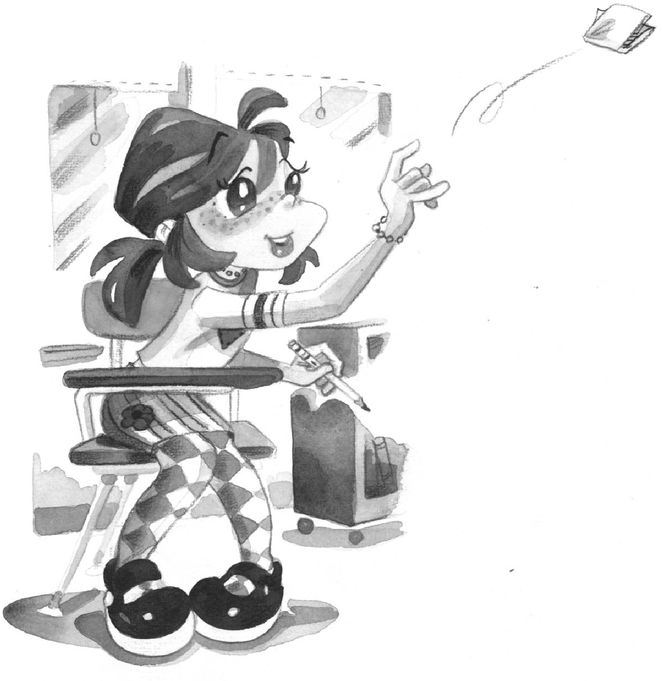 djinn wars 01 - chosen by pope, christine
Worth the Fight (Accidentally on Purpose) by Davis, L.D.
A Killer Closet by Paula Paul
The Orphan Uprising (The Orphan Trilogy, #3) by Morcan, James, Morcan, Lance
The Heart of the Matter by Muriel Jensen
Cough by Druga, Jacqueline
Heat Flash by Anne, Taylor
Close To You: Part 1 by Lee, Toni
Dead Lands Pass the Ammunition by Aaron Polson
Chains of Ice by Christina Dodd