Read I Own the Racecourse! Online

I Own the Racecourse! 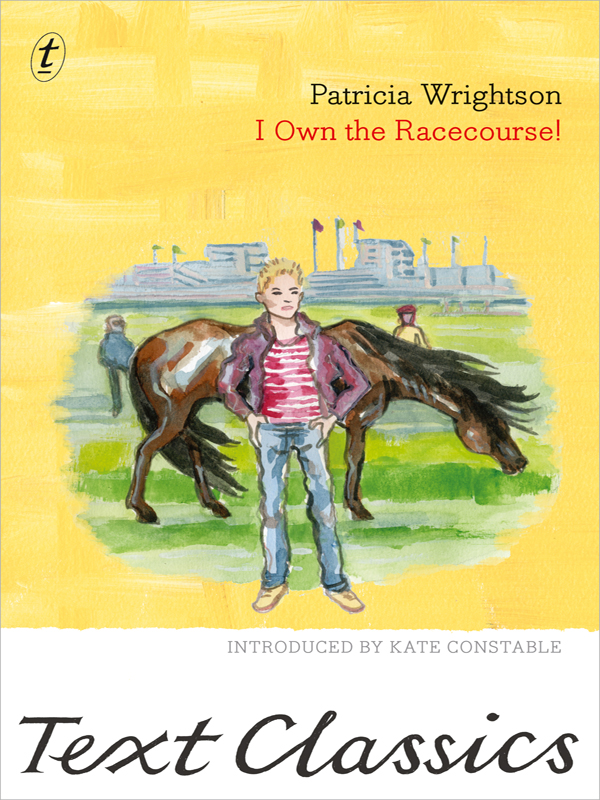 PATRICIA WRIGHTSON
, one of Australia's most eminent writers for children and teenagers, was part of the vanguard that established our literature for children: not only in Australia but around the world.

She was born at Bangalow, near Lismore on the New South Wales north coast, in 1921 and grew up between the two world wars, developing a spiritual connection to the landscape around her that later informed all her writing. During World War II she worked in a munitions factory in Sydneyâthe city that would provide the setting for one of her most popular books,
I Own the Racecourse!
âmarried and had two children. But the union did not last and Wrightson moved back to northern New South Wales, where she worked as a hospital administrator. There she began to write, and later became the editor of the
NSW School Magazine.

Wrightson's first novel,
The Crooked Snake,
was named the Book of the Year by the Children's Book Council of Australia, and she went on to receive the highest national and international honours for her writing: the Hans Christian Andersen Medal, the Dromkeen Children's Literature Foundation Medal, a further three Children's Book Council Book of the Year awards and an Order of the British Empire for her most famous work,
The Nargun and the Stars,
among others. In 1988 the New South Wales Premier named a prize in her honour.

KATE CONSTABLE
is a writer for children and young adults. She was born in Melbourne but spent much of her childhood in Papua New Guinea. Her 2011 novel,
Crow Country,
won the Children's Book Council of Australia Book of the Year (Younger Readers) and the Patricia Wrightson Prize in the New South Wales Premier's Literary Awards.

The Rocks of Honey

An Older Kind of Magic

The Nargun and the Stars

The Human Experience of Fantasy

Journey Behind the Wind

The Song of Wirrun
(a trilogy) 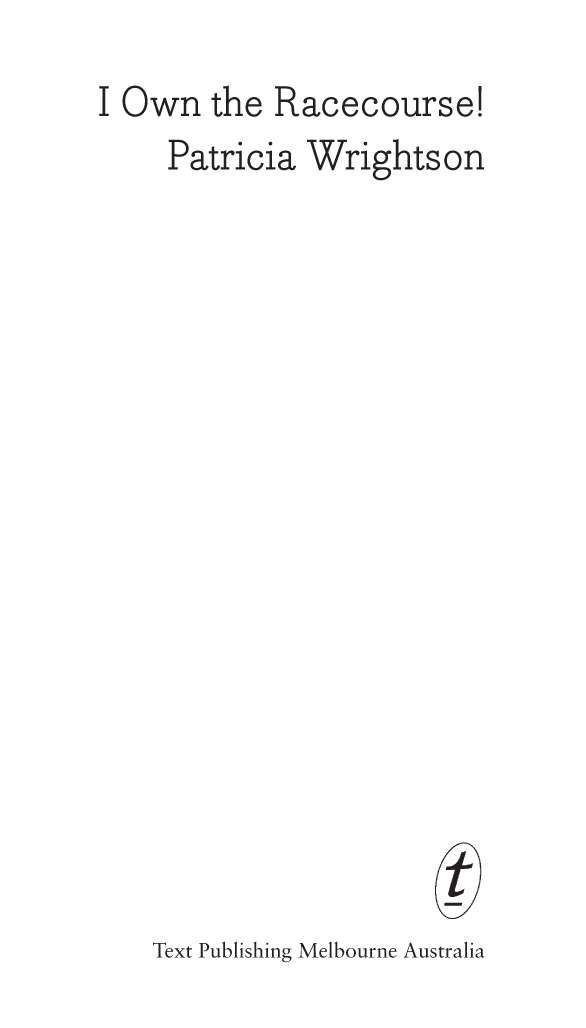 This edition published by The Text Publishing Company 2013

Printed in Australia by Griffin Press, an Accredited ISO AS/NZS 14001:2004

Title: I own the racecourse! / by Patricia Wrightson;

A Different Kind of Dreaming

I Own the Racecourse!

I Own the Racecourse!
was first published in 1968, a time when dollars were ânew-fangled', and a gang of eleven- and twelve-year-old kids could roam the streets and laneways of inner Sydney all day without anyone worrying about them, as long as they were home in time for dinner.

Andy Hoddel is a member of one of these gangs. But he is not like the other children.

Back then, no one used the term âintellectual disability': they used harsher, crueller words. Patricia Wrightson never puts a label on Andy. Instead, she describes the way he seems to live âbehind a closed window', as if a sheet of glass separates him from other people. Sometimes he laughs too long and too loudly, or flies into a wild rage when others might shrug and walk away. He doesn't always understand when someone's making a joke; he trusts what people tell him. He is friendly and eager and gentle, and lots of people like him. But he is different, and everyone knows it, even Andy himself.

The year after this book was first published, my sister was born. Just like Andy's friends and family, we slowly realised that she was different from other children. As a child, my sister was small and quiet, shy and sweet, with a worried, uncertain smile. The same invisible pane of glass separated her from other people that comes between Andy and his neighbours in Appington Hill.

Like Andy, my sister was friendly and trusting, but she struggled at school and she was unhappy there. When she was twelve, she was a pretty lonely kid. We did our best, yet we were always torn between the fierce desire to protect and shield her, and the need to prepare her to survive, to take care of herself. It's a dilemma that Andy's friends also have to face: how do you help a person like Andy understand that the world can sometimes be cruel without also hurting someone who is so vulnerable, so exposed?

When the old man collecting empty bottles at Beecham Park racecourse teases Andy by offering to sell him the place, the boy takes him seriously, and hurries off to raise the cashâthree whole dollars! By the time Andy has scrounged up the money and handed it over, the old man has forgotten their conversation, though he's happy to pocket the cash. And now Andy has a secret so huge he can hardly grasp it.

We read on with our hearts in our mouths, dreading the moment when Andy's impossible dream will be shattered. Like his anxious friends, Joe and Mike and Matt and Terry, at first we are indignant on Andy's behalf. Then, increasingly, we become fearful. Andy is so delighted, so proud to be the owner of this glorious place. Beecham Park might seem dusty and careworn by day, with its shabby stands and litter blowing about. But on race nights, it is transformed. Patricia Wrightson creates a magical place, rich with secret splendour, alive with glitter and lights and noiseâthe thundering horses, the buzz of the crowd, the tireless fun of the greyhounds. And all this belongs to Andy.

Except, of course, that his shining dream can't really be true. We know, like his friends, that it's all going to come crashing down. Or so we think. But what follows is unexpected and far more magical.

Appington Hill isn't a real place, but there are suburbs very like it in the inner west of Sydney. In the time Patricia Wrightson was writing, it was a working-class area, run-down but tight-knit. People lived a shared life in the back lanes and at the front doors that opened directly from the living room onto the street. They looked out for each other, were generous if money was scarce and watched over each other's children. The Appington Hill boys roam the neighbourhood, wander down to the timber yards by the docks, clamber down cliffs, ride homemade skateboards along the hilly streets, fish debris out of the canal. That kind of shared street life doesn't happen much now. We live in more anxious times.

But Andy's mother doesn't worry about him, so long as he's with his friends. Mrs Hoddel is aloneâwe don't find out what's happened to Andy's fatherâtrying to earn enough to keep the two of them, and looking after Andy âso people don't talk'. Neighbourhoods like these are full of kindness, but they can be full of hurtful gossip, too. The boys are just as anxious to protect Andy's mother as they are to protect Andy himself.

A bittersweet and loving bookâit's no wonder
I Own the Racecourse!
was so popular in Australia. It was subsequently made into a movie, and published in the United States and Britain as
A Racecourse for Andy
.

Patricia Wrightson is one of Australia's best known and loved writers. She is famous not only for realist fiction, but also for the magic realism in later books such as
The Nargun and the Stars,
in which she attempted to reconcile the mythologies of the first Australians with the modern world. Wrightson is brilliant at showing us the hidden magic in everyday places, whether it's the lush landscape of the north coast of New South Wales, where she spent most of her life, or the crowded streets of Sydney, where she also lived for a time.

Wrightson was later criticised for using Indigenous material, but her intention was always to help all Australians to appreciate the particular and ancient magic within the landâa project which some would argue is today more important than ever. In any case, her beautiful and sensitive writing deserves to be celebrated.

When Wrightson died, in 2010, she was one of the most honoured children's authors in Australia. She was awarded an OBE in 1977 and the prestigious Hans Christian Andersen Medal in 1986, and was four times the winner of the Children's Book Council Book of the Year.

Her friend and editor Mark Macleod commented after her death: âI thought she would live foreverâwith that sharp, searching intelligence, that gravelly voiced, old-fashioned correctness of delivery, that passion for justice, that kindness and modesty. Few Australian writers for young people have equalled and none have surpassed her achievements.'

The question at the heart of
I Own the Racecourse!
might be: what's real and what's not? When Andy's glorious dream at last fades away, the love and friendship that have wrapped around him are still there, just as Beecham Park remains solid and quiet when the glamour and splendour of race night is over. Ultimately, it's Andy's version of what's real that triumphs: because he believed it so hard, he really did own the racecourse. âHe's got to have things sometimes,' his wise friend Mike says, âeven if he does bust them.'

As for my sister, she's grown up now and doing pretty well. She has a job, with supportive workmates, and a home of her own. But I wish that when she was twelve years old, she'd had friends like Andy's in Patricia Wrightson's thoughtful, tender novel.

Beachcombing at Miramar by Richard Bode
Stealing People by Wilson, Robert
Wanted: One Ghost by Lynne, Loni
The Kringle Girls - Collection by Rede, Lily
The Whey Prescription by Christopher Vasey, N.D.
No More Heroes: In the Wake of the Templars Book Three by Rhoads, Loren
Charlie and Pearl by Robinson, Tammy
Fortune's Formula by William Poundstone
Callahan's Place 09 - Callahan's Con (v5.0) by Spider Robinson
Falling Free: What happens in Vegas... (The Fall Series) by Rossi, Annica