Ice Ship: The Epic Voyages of the Polar Adventurer Fram 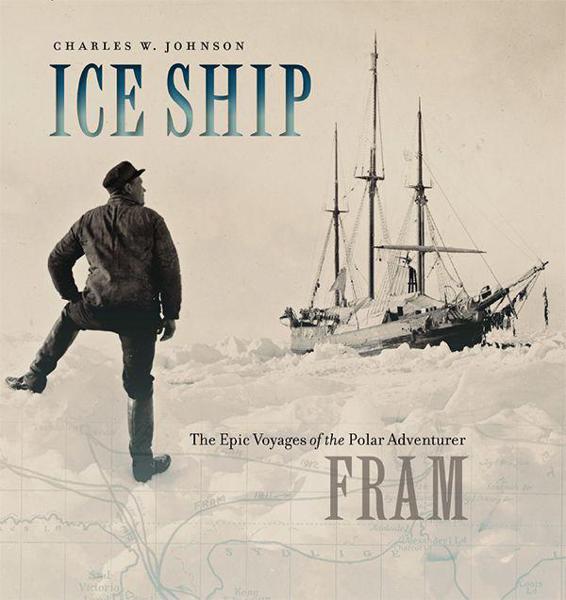 The Epic Voyages of the Polar Adventurer

For permission to reproduce any of the material in this book, contact Permissions, University Press of New England, One Court Street, Suite 250, Lebanon NH 03766; or visit
www.upne.com

The scattered wreckage of our lives can show the way for those who follow, if they correctly interpret what happened and then proceed carefully, avoiding the same mistakes we made.

My eyes adjust to the subdued light in the cool, cavernous building where it is now, forever off the oceans, forever away from the polar ice and brutal weather it often endured. It sits on big wooden blocks, black-hulled and massive, in this quiet, somber setting. Its voyages are done, its work long since over. But this is not a mausoleum; it is not lying in state. It is very much alive.

Its energy and history wash over me as I come close. As I let my hand run over its ancient skin, its deep scars, I am taken back to when I was little and heard my father talk of it with such awe and admiration, almost reverence, tinged with affection. Even then I sensed it had a life of its own, a personality built not just of the wood and iron but also by adventures at the far ends of the earth, by those who took it there. I had been eager to listen to stories about it, feel a bit of what others had felt who shared so many years with it. Now here I am, after all these years, ready to take in what the old ice ship will reveal to me, fully awake to what I had only dreamed before.

As I walk along its 128-foot length, I am struck by how massive yet graceful it is, a perfect blend of opposites. Its hull is smooth, steep sided, and rounded at the bottom, so that encroaching ice could not grab, squeeze, and crush, but instead it would slide up on it. Its bow and stern, armored with thick iron plates, are edged like wedges for smashing through. On board, there is solidity everywhere, a kind of geologic permanence that its long, rough history has not diminished. Its sides are two feet thick, four feet at stem and stern. Below decks are great bracing wooden knees and buttresses athwartships, skewered to the timbers by thick iron rods and bolts. Its three masts are like enormous trees, rooted in the keelson, from which the trunks rise majestically, pass through the deck above, and head toward the sky.

I move slowly through the living spaces below decks where the men slept, ate, read, sang, sometimes fought, and especially gathered for company on those interminably long winter nights, those years away from home. I sense the snugness
of their staterooms, insulated with wool, felt, and reindeer hair, which kept them warm even in the deepest subzero frigidity outside. The names from all three expeditions are etched in small metal plates above the stateroom doors, and I pause at each, remembering, then peer inside, looking for ghosts, or maybe feeling them. I linger longest at the one that says, “Fridtjof Nansen 1893–1896”—the man whose idea it was, who brought it into being. He was the man whose unsmiling, enigmatic gaze from his photographs in
Farthest North
always drew me in, made me wish I were one of them.

Now I am here, on his ship, beginning my own voyage.

›››
Notes: Place names in the book are those at the historical time in which the activity took place (for example, “Christiania” became “Oslo” in 1925, taking back its former name). A modern name, if different than the old, is given in parentheses the first time the place is mentioned. Photographers, when known, are identified in the captions.

Thanks to those in Norway, Canada, and the United States who have helped me during my research and writing of this book. Working with them has been rewarding, enlightening, and pleasurable. I am grateful to many for not just assisting but also bridging so gracefully the cultural and language gaps I had.

At the Fram Museum in Oslo, Geir Kløver, director, opened the doors to me for the entire project, allowing me full access to the
Fram
(even to crawl spaces usually off-limits to the public), sharing his extensive knowledge of the ship and exploration in general, and providing written and photographic material. Elina Vatymaa there also provided timely responses to my requests.

Susan Barr, noted polar historian, ethnographer, researcher, and author, made time in her busy schedule to visit with me and offer important considerations, and then kindly reviewed the manuscript.

At the National Library of Norway in Oslo, Guro Tangvald and Jens Petter Kollhøg have been wonderfully attentive, long distance and in person, to my repeated questions about and requests for photographs, maps, and original materials from the expeditions. Anne Melgård and Harald Lund helped me understand the materials more deeply, both the written and photographic.

At the Norwegian Polar Institute in Tromsø, Ann Kristin Balto helped with many of the original photographs, particularly hard-to-find ones from the second expedition. Helle Goldman also made herself available for consultation and assistance.

At the Norwegian Museum of Cultural History in Oslo, Liv Bentsborg provided several of the images taken by Anders Beer Wilse, a fine photographer of the period.

From her home in Trondheim, former colleague and Vermonter Nancy Bazilchuk gave encouragement and guidance.

In Canada, Jerry Kobalenko, veteran Arctic sledger and traveler, shared his knowledge of Ellesmere and of the
Fram
expedition there, and unknowingly gave inspiration through his fine photography and writing.

Lawrence Millman, friend, energetic wanderer, and naturalist, who is drawn to far northern places where humans are scarce, encouraged me early on to tackle this, and then, in his uniquely humorous, insightful (sometimes incisive) way, showed me the right direction and even suggested the main title.

Without Mike Burton, director of the University Press of New England, this book would not have come to pass; he saw through the smoke of my pipe dream about the
Fram
and got me going on the hard reality of writing about it. Thanks, too, to his skilled and helpful staff.

Finally, I owe a great deal to my family, for what they do out of love. Nona Estrin, my wife and close companion for so many years and in so many things, got me to Baffin Island twice and shared its wonders with me. She provided keen critique of each chapter through her sharp, discerning eye and finely attuned ear. She continues to inspire and surprise me by her special way of relating to nature, no matter where or when.

My sons, Brendan and Graylyn, have given me support beyond mere filial duty, showing interest and true delight in what I was up to. Brendan also helped me with the befuddling, and sometimes amusing, world of cyber-translation. My deceased son Hunter is always with me, too, wherever I go.

Finally, I give remembrance to my parents, whose presence and influence I often felt, different now but as palpable as at any time in my life. My mother, Margaret Hunter Johnson, loved literature, writing, and the quiet reflection required for both. My father, Robert E. Johnson, had a passion for investigation and understanding, including of the Arctic, its people, ecology, and history. I have his autographed copy of Nansen’s
Farthest North
, cherished for what it is and what it represents to me.