Read If the Shoe Fits (Whatever After #2) Online

If the Shoe Fits (Whatever After #2) 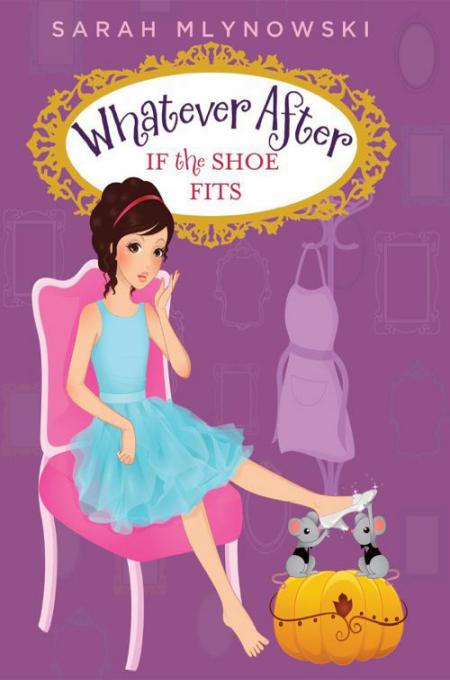 I
have a magic mirror in my basement and I’m going to use it.

Jonah’s hand hovers in front of the mirror. “Ready?”

“Oh, yes.” I am definitely ready. I’ve been
trying
for three days. Four nights ago, Jonah and I accidentally got sucked through the mirror and landed in Snow White’s fairy tale. Well, technically, we landed in the kingdom of Zamel. Rhymes with camel. That’s where Snow White lives.

If I’d known we were going to Zamel, I never would have worn slippers and pajamas. I would have worn jeans, a cute sweater, and sneakers. But I didn’t even know where we were until after we’d already messed up Snow’s story.

But don’t worry! Everything ended up fine. Different, but fine.

I did leave my slippers and pajamas at Snow’s, though. The slippers were pretty beaten-up anyway, but the pajamas were my favorite pair. Snow borrowed them one night and loaned me a skirt and top. Getting my pajamas back isn’t the only reason I want to visit Snow. I also want to know why Maryrose, the person who lives inside our magic mirror, sent me and Jonah there in the first place. There has to be a reason, right? And why did the magic mirror in Snow’s bedroom tell us not to tell our parents about what happened?

Jonah and I decided to find out.

But it didn’t work.

We stood there, waiting, but nothing happened.

No swirling. No hissing. No opening up its big mirror mouth and swallowing us whole.

The next night we tried again. We got up close to midnight. Put on jeans. Sweatshirts. Sneakers. Crept down to the basement. Knocked and knocked again. Knocked a third time.

Tonight is Night Number Three. Everyone knows three’s a charm. Especially when dealing with fairy tales.

So here I am. In the basement. Again.

Jonah’s fist is up against the mirror. Again.

No swirling, no hissing, no nothing.

I stomp my sneakered foot. “I don’t get it!”

Jonah sighs in disappointment, and his skinny arm falls to his side. “Do you think it’s broken?”

I peer at the antique mirror. It looks the same as it did when we first went through it. It’s twice the size of me. The glass part
is clear and smooth. The frame is made of stone and decorated with carvings of small fairies with wings and wands. It’s attached to the wall with heavy Frankenstein bolts. We just moved to Smithville — and into our new house — a few months ago, and the mirror came with the house. I used to think the mirror was creepy. I guess it’s still kind of creepy.

“It doesn’t look broken,” I say, seeing my brother and myself in the reflection. Jonah’s brown hair is short and kind of a mess, standing up in different directions. Mine is shoulder-length and wavy, but still neat. “Let me try,” I add.

I knock once. Twice. Three times.

The room is still.

“Hello? Maryrose? Are you there?” I know I said Maryrose lives inside the mirror, but truthfully, I’m not sure. All I know is that Maryrose has something to do with the mirror. I think. I really don’t know much. I sigh. “Maybe we imagined the whole thing.”

“No way,” Jonah says. “We were there. I know we were. We met Snow! We ate her stew sandwiches! Yum. I wish Mom and Dad would make them one night for dinner.”

I snort. First of all, Snow’s stew sandwiches were gross. And second, the likelihood of Mom and Dad trying a new recipe these days is very unlikely. Like one in a bajillion. They haven’t cooked in weeks. We’ve ordered pizza for the last two — no, make that three — nights in a row.

My parents used to cook all the time, before we moved to Smithville. They had time to cook then. Now they work all the time. They’re lawyers and just started their own firm. I keep telling them I’m old enough to do the cooking, but they won’t listen. Just because I nearly burned down our old house when I put my socks in the toaster ONE TIME. What can I say? I wanted toasty socks. They won’t even let me near the washing machine, which makes no sense. Fine. I used too much detergent and turned the laundry room into a bubble bath, but also, only ONE TIME.

“But I want an adventure! Maybe the mirror can take us to other places, too. Like Africa! Or Mars! Or Buckingham Palace!”

“We’ve tried three times, Jonah. We can’t do this every night. We’re growing kids. We need our sleep.”

He twists his bottom lip. “Just one more try.”

I let him try one more time even though I KNOW it’s not going to work. I am three years older than he is. I know these things. And I’m right. Of course I’m right. I’m always right. I march him up the stairs, back up to the top floor, and steer him toward his room.

He kicks off his sneakers and plants his face on his bed.

Back in my room, as I change back into my second-favorite pair of pajamas, I can’t help but wonder if we really did imagine the whole thing.

But wait! My jewelry box is sitting on my dresser, and on the lid of my jewelry box are illustrations of fairy tale characters. Snow White is right between Cinderella and the Little Mermaid. Snow is definitely not wearing her puffy dress. She’s wearing my lime-green pajamas, which means it really
did
happen.

So why isn’t the mirror working?

Yes, I’m cranky this morning. Why?

It’s not like I need a hot breakfast all the time, but the eggs are going bad TOMORROW. I know because I checked the carton.
Are my parents ever going to cook them? Why did they bother buying them?

And the laundry! They haven’t done the laundry in more than a week! What is up with that?

“I am down to my monkey underwear,” I say, shifting uncomfortably. My mother should know what this means. I have two pairs of monkey undies and I never, ever, EVER wear them unless I absolutely have to, since I am not a fan of wedgies. I should have just thrown them out. Of course, if I had thrown them out, then I’d have to go to school wearing dirty undies. Yuck. What I really need is for a) my parents to take me shopping, or b) for them to do laundry, but it’s not like either will happen, since they barely have time to brush their teeth.

Seriously, I think my dad forgot to brush his teeth this morning. His breath smells like last night’s pepperoni.

My mom ruffles my hair. “Sorry, honey. I’ll try to get to the laundry tonight.”

“If I run out of laundry, can I wear my Spider-Man bathing suit under my jeans?” Jonah asks.

“No, sweetie,” Dad says. “You wouldn’t be comfortable.”

It’s the end of the day and I’m in bed and I’m not happy.

Jonah, who is supposed to be asleep since his bedtime was an hour ago, pops his head into my doorway and whispers, “See you at midnight!”

“And what are you basing that on? The fact that it hasn’t worked for the past three days?” I ask in my best lawyer voice. I’m going to be a lawyer when I grow up. Not because I want to be a lawyer, but because I want to be a judge. You have to be a
lawyer before you can be a judge. That’s the rule. For the record, when I’m a lawyer, I’m still going to do stuff like laundry and cook.

“It has to work at some point,” Jonah reasons. “I’m setting my alarm.”

I will humor my brother and return to the basement. But this is the last time. After tonight the mirror is dead to me. Enough is enough.

I open one eye, then the other. Doesn’t my brother know that he’s supposed to knock? That’s the rule.

My alarm rings and I reach out to turn it off. Grumble. So. Not. In. The. Mood. But I swing my legs over the side of the bed anyway.

“Nope.” I am staying in my pink pajamas with purple polka dots. Not anything I’d ever be caught in outside my house, but I’m not worried. It’s not like the mirror’s going to work.

Okay, here’s the secret thing. Have you ever heard the expression “A watched pot never boils”? My nana says it all the time. It means if you’re waiting for something to happen, it won’t. But if you don’t wait, it will. Like when you’re waiting for your friend to call you back and you stare at the phone, hoping it will ring. It doesn’t. But if you go off and do your homework, before you know it, your friend calls and — yay! — interrupts you.

So here’s what I’m thinking: What if
this
is like
that
? When I get all dressed up expecting the mirror to let me in, it doesn’t work. But if I wear the most RIDICULOUS pajamas I have, the only ones that happen to be clean, then the mirror will think I’m not expecting it and will finally let us in!

I shove the thought back down deep inside my brain. If the mirror knows I’m trying to trick it, then my trick isn’t going to work.

And sneakers. (No choice. The basement floor is cold, and my slippers are still at Snow’s.)

I climb down the stairs with Jonah. I close the basement door. We stand in front of the mirror.

“Whatever,” I say, trying to sound bored.

He knocks a third time — thrice.

Ha, isn’t that a funny word? It sounds like a kitchen utensil. To make the eggs really fluffy, I need to use the thrice. Except no one in my house eats eggs anymore.

“Maybe we
did
just imagine the whole thing. Even the jewelry box. Or maybe Maryrose left town. Maybe she came with us to Snow’s story and stayed there. Maybe —”

Jonah is pointing at the mirror. “Look!”