Read If the Slipper Fits Online

If the Slipper Fits 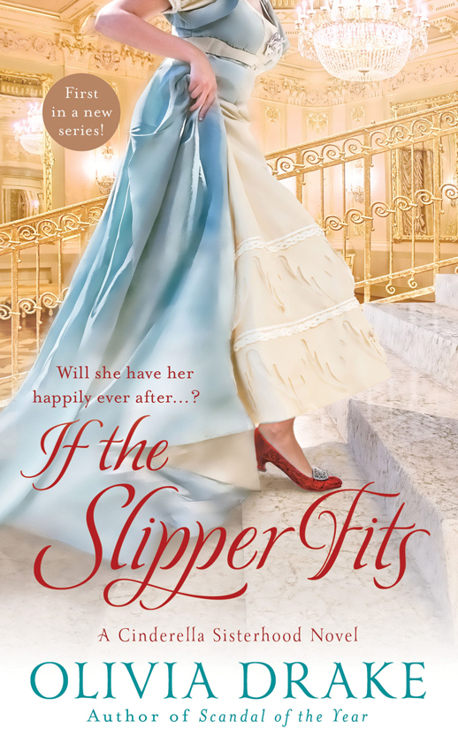 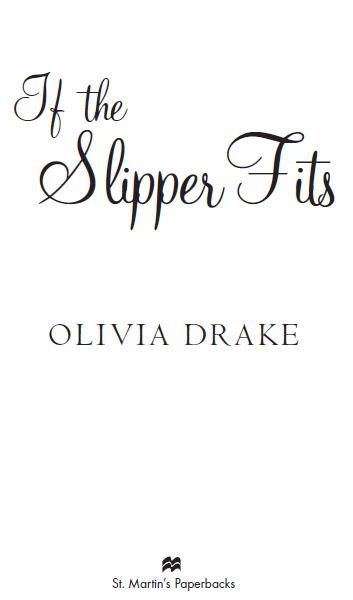 It all began with a letter.

While the rest of the teaching staff sat down to dinner, Annabelle Quinn hurried along the gloomy corridor at Mrs. Baxter’s Academy for Young Ladies. The loud knocking echoed again through the entrance hall, and in her haste, Annabelle nearly tripped on one of the cracked tiles in the foyer. She steadied herself with a hand on the newel post before proceeding to the door.

It was highly unusual to receive a visitor in the evening. The pupils were already settled in their dormitory, and she and the other teachers would soon retire for the night. Few people ever came to this remote country school in the moors of Yorkshire, only the vicar and the occasional tinker or deliveryman.

The massive front door creaked as she opened it. Framed by the purple dusk, a stoop-shouldered stranger in the garb of a workman stood on the porch. “Ye took yer sweet time,” he grumbled while shoving a letter at her. “I was paid to put this straight into yer hand.”

Orphaned at birth, Annabelle had never received a letter. “
My
hand? But who—?”

The man ignored her questions. He clomped down the steps and climbed onto a sway-backed nag. With a flick of the reins, he went trotting off down the drive.

She turned over the sealed note with great interest. Her mind resurrected a buried dream from her childhood: a long-lost relative arriving to declare that Annabelle had been stolen at birth, and offering to whisk her away into the arms of a warm and loving family …

The last light of dusk fell upon the front of the envelope. She blinked at the elegant spidery script. It was addressed to the headmistress.

Annabelle felt instantly foolish. Of course the letter wasn’t meant for
her.
The man had been instructed to give the note to someone—anyone—at the school rather than drop it into the postbox by the door where it would not be noticed until the morrow.

In all her twenty-four years at the boarding school, first as a charity student and then as a teacher, Annabelle could not recall a single other instance in which Mrs. Baxter had received a letter by special delivery. If this message couldn’t wait until the midday post, it must be extremely important.

The thought gave wings to her feet as she hurried back along the murky corridor to the dining chamber at the rear of the ancient converted manor house. There, she paused in the doorway.

Candles in pewter holders cast a meager illumination over the long table laid with crockery and tin flatware. The aroma of roast beef and potatoes drifted from the covered dishes on the sideboard. The dozen teachers sat listening while Mrs. Baxter read aloud in a gravelly monotone from her well-worn Bible.

Annabelle debated whether or not to interrupt. Did she dare to break the rule of silence during these nightly readings? But what if the letter conveyed urgent news? Wouldn’t she then be scolded for not speaking up at once?

She cleared her throat. “I beg your pardon.”

Mrs. Baxter stopped in mid-verse and scowled over a pair of rimless reading glasses. A skeletal woman with a bony bosom, she had gray hair scraped back into a bun and covered by a lace widow’s cap. “Have you so little regard for the holy Scripture, Miss Quinn?”

“Forgive me,” Annabelle murmured, deeming it wise to lower her chin in humility. “But you’ve received a letter by special messenger.”

“No earthly correspondence could be more important than the heavenly Word.” The headmistress clapped the Bible shut. “However, since you’ve been so bold as to interrupt, don’t stand there like a dolt. Bring the letter to me at once.”

A muffled giggle emanated from one of the teachers, followed by the murmur of whispered conversation. Annabelle knew without looking who they were, razor-tongued Mavis Yates and her dull-witted disciple, Prudence Easterbrook. They were two peas in a rotten pod.

The other women avoided Annabelle’s gaze as she walked toward the head of the table. Almost too late, she spied Mr. Tibbles lying beneath the headmistress’s chair. The orange tabby cat was Mrs. Baxter’s pride and joy—and a bane to everyone else.

As Annabelle handed over the letter, Mr. Tibbles hissed a warning. His green eyes looked demonic in the candlelight and his long tail flicked back and forth on the carpet. Having been scratched in the past, Annabelle wisely backed away and slipped into the single empty chair at the long table.

Mrs. Baxter broke the seal and unfolded the paper. As she scanned the message, her pinched features took on an unusual animation. Twin spots of pink appeared in her waxen cheeks. “Why, this is extraordinary. Most extraordinary, indeed!”

“Is something wrong, ma’am?” asked Mavis in the toadying manner she always used with the headmistress. “I should be happy to lend assistance in any way you wish.”

“As would I,” Prudence chimed in. “Unless of course it is a private matter.”

Removing the glasses from the bridge of her nose, Mrs. Baxter gave her favored two teachers a distracted smile. “How very kind, but your concern is misplaced. It seems I am to have the honor of a visitor from London on the morrow, a fine lady from the royal court. She will wish to meet the staff, so you must all wear your very best.”

The news set the dining room aflutter. “The royal court?” chimed several teachers. “Who is she?” “Is she bringing her daughter to study here?”

“Her name is Lady Milford and she is seeking a governess for the young Duke of Kevern in Cornwall. She will be interviewing a select number of you for the post.”

Annabelle sat riveted. Cornwall! It seemed as distant and exotic as China or India. For many years, she had yearned to see the sights beyond the insular world of the school. On the rare free day, she would hike the moors and imagine what lay beyond the barren, windswept hills. Hungering for knowledge, she’d read every geography book in the library. She’d pored over maps of England and foreign countries, places with fascinating names like Egypt and Constantinople and Shanghai. She had studied and dreamed and saved when the other teachers had spent their wages on new gowns and ribbons and other frivolities.

Now this was her chance to escape the tedium of teaching manners to giggly young girls concerned only with fashion and gossip. She would have to carefully consider what to say in the interview, how to present herself as the ideal tutor for a young aristocrat …

As Mrs. Baxter glanced around the table, her gaze stopped on Annabelle. Those pale eyes took on a distinct chill. “Miss Quinn, you must instruct the maids to clean my parlor from top to bottom. And since you will not be participating tomorrow, you’ll have ample time to assist the other teachers in any needlework they might require. Run along now, and close the door on your way out.”

The joy drained from Annabelle. She was being banished. She would not be granted a coveted interview. The colossal injustice of it overruled all caution.

She stood up from the table, the chair legs scraping the wood floor. “Please, I should very much like the opportunity to meet Lady Milford.”

“Do you dare to gainsay me?” Mrs. Baxter said in tight-lipped astonishment. “I have issued an order and you will obey it.”

“But I’m as well prepared as anyone else here to be governess to a duke, perhaps more so. I’ve studied Latin and Greek, I’m adept at mathematics, well versed in science and literature—”

“Your qualifications are of no consequence. My lady visitor will wish to hire someone from a respectable family. She would never consent to employ a bastard who cannot even put a name to her own parents.”

The scornful words echoed in the cavernous dining chamber. Mavis and Prudence had the audacity to smirk. The other teachers regarded Annabelle with pity or discomfiture. Although most of them were pleasant enough, they would not align themselves with her for fear of being ridiculed, too.

Her cheeks burned with humiliation. It took an effort to harness the impulse to lash out in anger. Protesting further would only invite the headmistress’s wrath—typically in the form of docking Annabelle’s already paltry wages. She couldn’t afford to lose a single ha’penny of her nest egg.

She curtsied to Mrs. Baxter, then walked out of the dining room and shut the door. Annabelle paused there in the dim corridor with her head cocked, trying to discern meaning in the muffled drone of Mrs. Baxter’s voice. What was the headmistress telling everyone? Was she giving them instructions on how to act and what to say? Was she announcing the order in which they were to meet Lady Milford?

Realizing her fists were clenched, Annabelle gulped several deep breaths. Wild emotions must not goad her into another impassioned outburst. Better to have a clear mind so that she might determine rationally how to proceed.

One thing was certain, she would not relinquish this golden opportunity. A chance like this might not come along again—ever. By hook or by crook, she
must
finagle her way into an interview.

Shortly after luncheon the following afternoon, the rattle of carriage wheels outside disrupted the discipline in Annabelle’s classroom. One minute, the group of fifteen-year-olds paraded in a dignified circle, each girl balancing a book on her head to learn proper posture. The next minute, several students broke rank and rushed to the windows overlooking the front of the school.

“Why, will you look at that!” exclaimed Cora, a redhead with a dusting of freckles over her elfin face. “Have you ever seen such a splendid coach?”

Beside her, a plumpish brunette pressed her nose to the glass and peered downward at the drive. “Who could it be?” Dorothy asked. “Do you suppose it’s a new girl? But why would anyone so rich be coming here—and after the term has already begun?”

Annabelle clapped her hands. “Ladies, it isn’t polite to stare. Come back here at once.”

“Oh,
please,
Miss Quinn, do spare us just a moment,” Cora said, casting an imploring glance over her shoulder. “Don’t
you
want to find out who’s come to call?”

They could have had no inkling that Annabelle already knew, or that her insides were twisted into a knot. The visitor had to be Lady Milford.

For the umpteenth time, Annabelle fretted over how best to present her credentials to the lady. It was a quandary she’d pondered into the wee hours, sewing by the light of a single tallow candle, repairing rips in hems and attaching new lace to the gowns worn by the other teachers today. While she’d labored, she had considered and rejected numerous plans. The fly in the ointment, of course, was Mrs. Baxter. The headmistress would be keeping a sharp eye on the proceedings. But if all went well, there might just be a way—

Pool Boys by Erin Haft
A Sport and a Pastime by James Salter
Tempted by Darkness by Avery Gale
Definitely Maybe by Arkady Strugatsky, Boris Strugatsky
All For One [Nuworld 3] by Lorie O'Claire
The Invention of Exile by Vanessa Manko
A Mid-Summer's Mail-Order Bride by Kit Morgan
The Diary Of A Submissive: A True Story by Sophie Morgan
Misterio del collar desaparecido by Enid Blyton
The Sword of Ages: The Mage Breaker Book 1 by Issett, A.L.