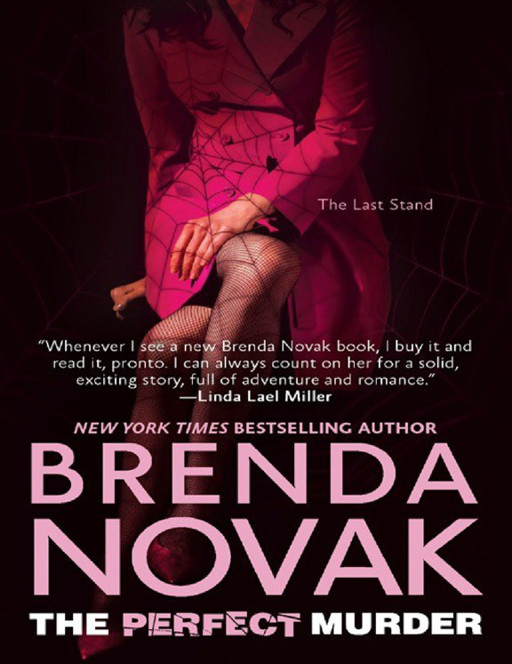 --Romantic Times BOOKreviews
on
Trust Me

"In
Trust Me
...Brenda Novak expertly blends realistically gritty danger, excellent characterization and a generous dash of romance into a chilling, thrilling novel."

"Novak has outdone herself with this series. She is a great storyteller."

--
Once Upon a Romance

"Trust Me
is a page-turner.... Sure to become a much-loved keeper-shelf read...I highly recommend
Trust Me
and suggest Brenda Novak be added to your 'to buy'

"No one can send chills down my spine as Brenda Novak can."

"When I open a Brenda Novak story, I...delve headfirst into a scene so vividly portrayed that I am with the characters each step of the way."

"The third book in Novak's trilogy is creepy and absorbing, and the characterizations are excellent. Plan to stay up very late to finish this one!"

--Romantic Times BOOKreviews
on
Watch Me

"Whenever I see a new Brenda Novak book, I buy it and read it, pronto. I can always count on her for a solid, exciting story, full of adventure and romance."

To my Aunt Judy and all her "ladies"--

I love hearing how you swap my books at the salon.

Here's hoping you enjoy the latest!

I was so excited about writing this book--even more than usual--probably because I knew I'd be using Jane Burke as the heroine. Jane was a secondary character in
Trust Me
(the wife of the villain), but with her experiences and background, I found her very worthy as a lead. In this story she's back on her feet and actually working at The Last Stand fighting crime along with Skye Kellerman, the woman who saved her life five years ago. But it isn't smooth sailing for Jane quite yet. Not when she gets involved in a case that puts danger front and center in her life once again.

It's hard to believe that I've already completed six books in this series--
Trust
Me, Stop Me, Watch Me, The Perfect Couple, The Perfect Liar
and this one. While these books are only loosely connected and you certainly don't have to read one to enjoy the others, you might enjoy spending a little more time with some of the continuing characters.

Please visit me on the Web at
www.brendanovak.com. T
here you can enter my many contests and giveaways, read interviews with various professionals in the criminal justice world, download free 3-D screen savers, take a virtual tour of the Last Stand offices, read a short prequel to the whole series, and more. If you sign up for my mailing list, you'll be invited to my annual cyber-Christmas party, which is a blast. Also at my Web site you can learn more about my annual online auction for diabetes research, an event I sponsor every May (my youngest son suffers from this disease). Together with my fans, friends, fellow authors and publishing associates, I've managed to raise over $700,000 to date. Don't miss the auction in 2010. It's going to be amazing!

That I may tell pale-hearted fear it lies,

And sleep in spite of thunder.

T
hese men who killed their wives...they didn't have a clue how to do it right, how to get away with it.

Malcolm Turner frowned in disgust as the credits appeared at the end of the true-crime show he'd just watched on TV. It had featured a male nurse who'd murdered his mouthy, blonde wife. As far as Malcolm was concerned, she'd deserved what she got--she'd been a straight-up bitch. But what kind of idiot talks about succinyl chloride right before using it to end a life?

"Punk," Malcolm muttered and glanced over at his wife, asleep in bed next to him. When he killed her and her teenage son, no one would question a thing.

They'd believe exactly what he wanted them to believe because he knew what the hell he was doing.

He should--he'd been in law enforcement for fifteen years.

M
ary looked good. Better than she had in high school. There were more curves to her body, a new sophistication to her face, and her smile seemed to have more meaning behind it. But Malcolm could tell she was weary. The divorce had taken a heavy toll. And she did a lot for her two boys.

He shifted, ducking when he heard an engine in the street. He was partly shielded by a large poplar tree and, judging by the volume of the music emanating from what appeared to be a muscle car, the driver was probably a teenage boy who was as oblivious and self-absorbed as he used to be at that age. But it wouldn't do to have someone see him peeking in Mary's windows.

The car, bass pounding through its speakers, passed without slowing. Then the beat and the motor dimmed, and the neighborhood returned to sleep mode. This was Malcolm's favorite time to watch Mary--although he sometimes came when the sun was up, too, if he thought she'd be home from work. Now that he was unemployed it was hard to fill all the hours in a day. His new life hadn't turned out remotely the way he'd imagined when he'd planned to start over. He missed the people he'd known before, wanted to contact some of them--but they thought he was dead and they had to go on thinking that.

Maybe that was why, after so many years, he'd looked up his high-school sweetheart and followed her to California. The compulsion to reconnect didn't make much sense otherwise. He'd moved on without her quite easily twenty years ago. Married twice, divorced once and...

He didn't want to think about what he'd done to his second wife. He didn't regret killing her or her son. As far as he was concerned, they deserved what they got. But ever since he'd gambled away most of the insurance settlement he'd taken when he left Jersey, he'd been forced to live in dumpy rental houses out in the boondocks where the smell of cow shit was so strong it sometimes felt as if he was standing in it. Tough to find something better when the only jobs he could get were at two-bit security companies that paid a buck or two over minimum wage.

With a silent curse, he remembered the last job he'd held. It wasn't the meager pay that bothered him so much as the lack of respect. He couldn't take it; 11

not after being a real cop.

After only a few minutes at the computer, Mary stood and started turning off the lights. With the kids in school and her job at the hospital, she was pretty damned predictable. From here, she'd go into her bedroom, pull the blinds and the show would be over.

Unless she didn't bother with the blinds. In the months he'd been watching her, she'd forgotten only once, but that gave him hope.

Creeping around to the other side of the house, he squatted in the shrubbery and waited for her to enter her bedroom.

She came in, turned on the TV, put away some clothes that were folded and sitting on a chair. Then she approached the window. They were only inches apart, so close he could see the mascara smudges that told him she'd been rubbing her eyes--

Then the blind went down.

Shit.
Malcolm sank lower on his haunches. What now? Should he head to the Indian casinos and while away a few hours?

He toyed with the idea of slipping into the house, exploring the empty rooms, touching Mary's things, stealing a pair of her panties. Maybe even watching her sleep. The temptation to do so was growing stronger every day. He certainly thought about it a lot. But he was afraid he'd get caught and screw up the possibility of having a real relationship with her once he could trust her enough to reveal his true identity. He'd come too far to blow all that by being impatient....

He had to leave. But that didn't mean he had to call it a night. Thinking of the Kojak light he kept in his van, he felt his mood improve. Playing cop wouldn't put him in Mary's bed tonight, but it would give him the adrenaline rush he craved--and maybe a few sexual favors to go with it.

Jane Burke recognized an opportunity when she saw one. Ever since she'd started working at The Last Stand, she'd been waiting for her chance, hoping a case would come along that would allow her to prove herself.

She was pretty sure it had just walked through the door.

"The man who let me in said you might be able to help me." A short cannonball of a woman stood uncertainly in the entryway of Jane's office, swiping at tear-filled eyes.

Motioning for her to come farther into the room, Jane brought over a box of tissues. "I'll do my best," she promised. "But first I need to learn more about why you're here."

The young woman's obesity made it difficult to guess her age, but Jane pegged her at twenty-four or twenty-five. Gerald, the volunteer who'd admitted her, had told Jane she had two siblings who'd recently gone missing. So far, that was all Jane knew. If it'd been on the news, she hadn't seen it or heard about it. But that wasn't too surprising. She'd been so busy she hadn't even turned on the TV.

In an attempt to control her emotions, the woman took two tissues and blew her nose. "Gloria. Gloria Rickman."

"Gloria, I'm Jane Burke. Please sit down so we can talk." Jane returned the tissue box to its generally ignored corner, then pulled a chair away from the wall, placing it in front of the desk, where it would've been if she'd been in the habit of taking her own cases. She was still in training, had been since she'd started six months ago, which meant she did all the tedious record searches, time-consuming court runs and boring clerical work for the three partners who were the backbone of the victims' charity. But she had a feeling the criminal justice courses she'd been taking, and everything she'd learned on the job, was about to pay off. With Skye Willis and Ava Trussell in South America on a rare job-for-hire, tracking a father who'd stolen his child from his ex-wife, and Sheridan Granger out on maternity leave, Jane had been left in charge of the office. This was the perfect time to tackle her first case. Other than the three volunteers who came in to stuff envelopes or solicit donations, she was the only person here.

Chiffon Scarf by Mignon Good Eberhart
The Snow Vampire by Michael G. Cornelius
Last Stand of the Dead - 06 by Joseph Talluto
The Poser by Jacob Rubin
Never Trust a Scoundrel by Gayle Callen
Rev Me Twice by Adele Dubois
The Prince She Had to Marry by Christine Rimmer
Emmett by Diana Palmer
Battle for Proxima by Michael G. Thomas
Name On The Bullet - Edge Series 6 by Gilman, George G.