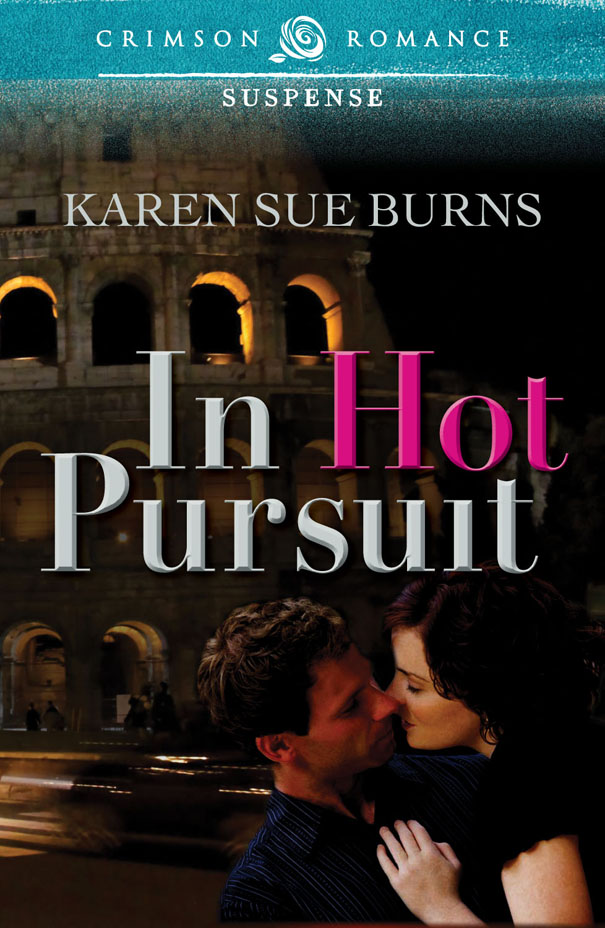 A Sneak Peek from Crimson Romance

The life path for Quinn Wells encountered a major detour on an afternoon in mid-May â one of those close to scorching afternoons when office workers shuffled paper or checked movie times, waiting for the clock to tick-tick to going-home time. She considered herself productive that afternoon, color-coding her accounting files for the upcoming fiscal year end.

Then her office phone rang.

It was an outside call, from First National Bank. Her hand hesitated over the receiver, but she was a sucker for a ringing phone.

“Confused. We haven't received the wire yet.”

“The wire for the twenty-five million dollars from the Bridge Foundation. Can you check on it?”

Quinn had no idea what Lynne was talking about â and no way would she let her know that. It was embarrassing, once again, not knowing about a major gift before it arrived.

“Give me a few minutes and I'll get back to you.”

Quinn replaced the phone, shook her fists at the ceiling. A twenty-five million gift was being wired today? What the hell? She jumped out of her chair and headed for the office of her boss, the vice president of finance. Surely, he knew about the wire. She rushed down the long hallway and found his assistant, Ellie, at her desk.

Ellie looked up from a paperback novel. “No. I came back from lunch and he was gone. Calendar says he's at a meeting and should return in half an hour.”

Quinn blew a slow breath, worked at calming her frustration. “Let him know I need to talk to him as soon as he returns.”

She debated what to do next. Should she wait for Scooter or should she call Development, the department responsible for soliciting gifts? Would Scooter be upset if she didn't wait for him?

Back in her office, she turned her chair away from the desk and her eyes moved to the CPA certificate on the wall. She'd worked her ass off to pass the exam and earn that credential. Ten years ago, she hadn't worried about making the wrong decision, she simply went with her instincts. She picked up the phone to call the executive director of development.

“Rebecca, I need to ask you about a gift that was wired today.”

“You mean the one from the Bridge Foundation?”

“That's the one. The bank called and the funds haven't arrived.”

“That's strange. The wire should have been sent first thing this morning. We sent the wire instructions two days ago.” Rebecca's voice was calming. “Let me contact the donor and I'll call you back. I'm sure it's a simple mistake.”

While Quinn waited for the return call, she shuffled files on her desk, then dug an antacid tablet out of her purse. The taco she had for lunch was talking to her. She chewed the tablet and stared out the office window. Friday classes at Houston Cullen University were over and students rushed toward the parking garage down the street. The weekend would officially begin at five o'clock.

The phone rang. Rebecca's name appeared on the digital read out.

“I called the director of the Foundation. He said he talked with their brokerage firm this morning and the wire was sent as planned.” Rebecca was still calm.

“Something is wrong.” Why wasn't she freaking out like Quinn was about to do?

“Don't worry,” Rebecca said soothingly. “I'm sure it's some glitch within the bank. They're all having problems these days.”

“Right, thanks for the information.”

Something was definitely wrong. How did twenty-five million dollars disappear? Quinn's head was hot. Where was Scooter? He should be the one calling the bank. But Lynne from the bank had called Quinn, so she'd do her duty and follow up. She punched in the number and Lynne answered on the first ring.

“The Bridge Foundation says the wire was sent this morning,” Quinn said.

“That's what our Development Office told me.” She wiped sweat off the back of her neck. “What should we do to find the funds? This can't happen every day.”

“No, it doesn't, and not with such a large sum. I'll call the brokerage firm and get their transaction number for the transfer so we can trace it through the Federal Reserve System. Should I follow up with you or Scooter?”

“Would you mind calling Scooter?” Quinn knew he'd want to hear it from Lynne himself.

“No problem, I'll call him as soon as I have an update.”

Quinn next called Ellie to find out if Scooter had come back to the office â¦ not yet. Now what?

She stacked the color-coded file folders on the credenza adjacent to her desk, then decided to clean out her email. The distraction of busy work kept her from imagining why the gift might be missing. She glanced at the time in the corner of the monitor â 3:27. Surely Scooter would return any minute.

She first went through her inbox and deleted messages she'd already read, jotting reminder notes on a yellow pad. She clicked through the list and checked the time again â 3:51.

Where was Scooter? This would be the day he was late coming back from a meeting.

Quinn next focused on the spam folder, a total of 112 messages. She worked her way through it to those dated today, then she stopped, her fingers clutching the mouse. This was strange, a message from Gregory James, Inc., the brokerage firm used by the Bridge Foundation. Why would they send her an email? She double-clicked and read the message. Her throat squeezed shut, and she couldn't catch a breath.

Holy shit. The message confirmed a change, her change, to the wire instructions for the Bridge Foundation's gift. The receiving bank and the associated account number had been updated as instructed â¦ by the controller of Houston Cullen University. She swallowed, then sucked air in her lungs. What?

She jumped out of her chair and rushed to the office door, closed it quietly. Then the shaking started, from her elbows to her knees. She began to pace her office from the small window to the door, ten steps, back and forward. As she walked, the shaking lessened. Although her brain spiraled around in a state of shock, her limbs began to regain their memory of function.

After a few minutes, she stopped pacing and sat back at her desk, ready to deal with the message, still open on her monitor.

The email was an error. She had made no change to the wire instructions. How could she since she didn't even know about the gift until two hours ago? The message implied she stole the twenty-five million by changing the HCU wire instructions. It was a mistake or a joke. Someone had a sick sense of humor.

She took a deep breath and printed the email. She debated telling Scooter about the message but decided to keep it to herself for now. She grabbed the paper off the printer and folded it in half, then half again, small enough to slide into her wallet. She tossed the wallet back into her purse. She'd analyze this later and then determine the right thing to do.

Even a lousy plan was better than no plan at all.

“Quinn, this is your fault,” Scooter Taylor said through thin lips an hour later. He sat at his huge oak desk. Late afternoon sunlight filtered through the window blinds, creating prison-bar stripes on the honey-toned wall behind him.

He'd finally returned and told her he'd already called the police, not wanting to waste time or HCU resources.

“Yes.” He squeezed the bridge of his nose with two fingers. “You should have verified the wire was received this morning. But you didn't and now the funds are missing.”

“I didn't even know about the gift.” She blew a slow breath. The Gregory James email popped in her head and she pushed it quickly to a back corner.

“You would have known about the wire if you were on better terms with Development. But, oh no, you're always picking at them.” He lowered his voice. “They don't like you, so they don't talk to you.”

Of course, Development didn't like her. The by-the-book procedures she insisted on routinely placed them on opposite sides of an issue. How did that relate to a missing gift? She crossed her arms over her chest. “Maybe we're not all best friends, but that doesn't mean this is my fault.”

“It doesn't matter now. Finding twenty-five million dollars is what's important.” He glared at her again, shook his head. “I expect you to be a team player.”

“I am a team player,” Quinn reminded him, on the edge of pleading, even though they were in familiar territory. He reminded her every few months to get along with Development.

“I'll do whatever I can to help. Just tell me what to do.”

A campus security officer knocked on the door. “Mr. Taylor, Houston PD is here.” She nodded at Scooter, then left.

Quinn took another slow breath. The police had arrived so quickly. The situation was now a bona fide disaster.

A tall man wearing jeans and cowboy boots entered Scooter's office. He surveyed the room with a calm face. He had that ruggedly appealing look that screamed
don't tangle with me
.

“Good evening, I'm Roddy Phillips from the Burglary and Theft Division, HPD's Financial Crimes Unit.” He pulled a small notebook from his jacket pocket and flipped it open. “We received a call from a Mr. Taylor reporting missing funds.”

“Yes, detective, I'm Scooter Taylor, vice president for finance here at HCU.” He walked around his desk and shook the cop's hand, then turned toward Quinn. “This is Quinn Wells, our controller.”

“Good to meet you, Mr. Phillips,” Quinn said. He nodded in reply.

Scooter directed the detective to the round conference table across from the desk and waved a hand to Quinn to join them. Rebecca Holland from the development office, accompanied by a man who looked like he stepped off a New York runway, hastened into the office.